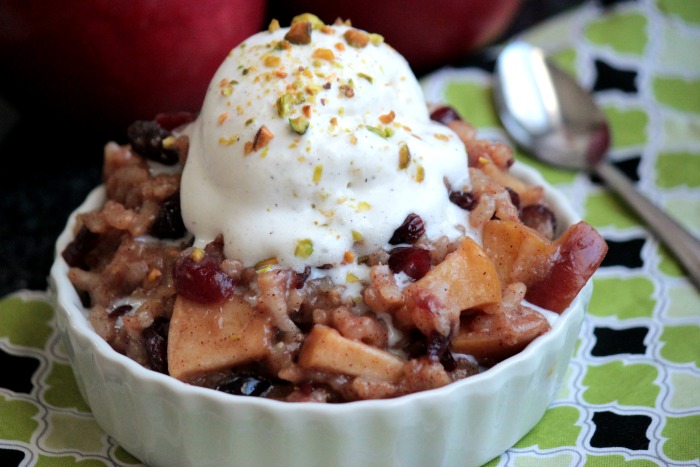 Guess what I did, ya’ll!

So, I’ve been wanting to become a full time blogger for a while now but I just couldn’t get up the nerve to leave my full time job and I wasn’t sure if I could keep making the money we needed while working from home. However, I’m moving into that direction.

While I haven’t completely quit my full time job, I did cut back my 5 day office week to 4 days a week so that I can have an extra day in the kitchen at home and behind the screen to work on BigBearsWife.com.

Ok, I know that doesn’t seem like a lot but it’s a step in the right direction. Baby Steps Y’all, Baby Steps. 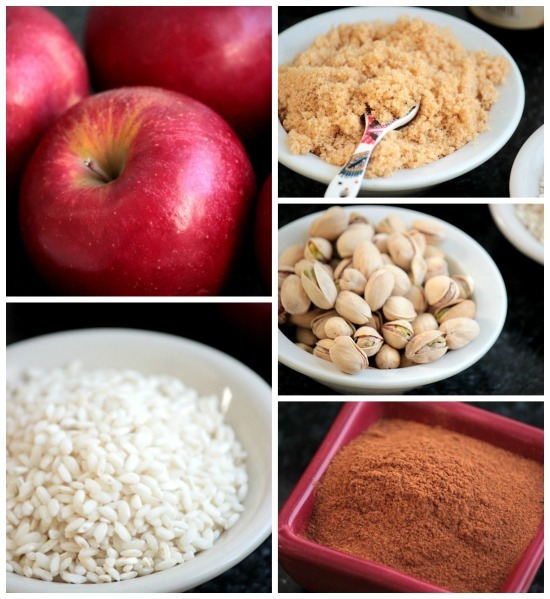 I’m pretty excited about this and I just hope that I can make this work. Like I said, It’s been a dream for a while now and it’s slowly becoming reality. 🙂 YAY!

Cross your fingers for me guys! I need this 🙂 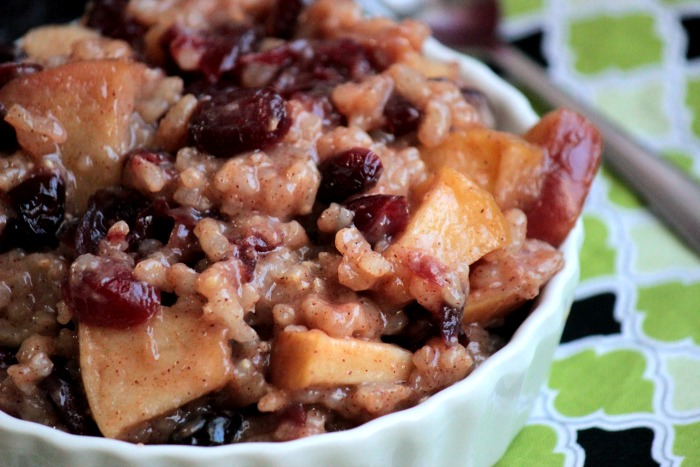 So let’s talk about this Apple Cinnamon Dessert Risotto for a minute.

I’ve talked about it in the past and I’ll probably mention it in the future but y’all know that my apple love jumps from one extreme to the other right?!

I’ve either got to have a plain, crispy apple or I’ve got to cover that thing in cinnamon and brown sugar. 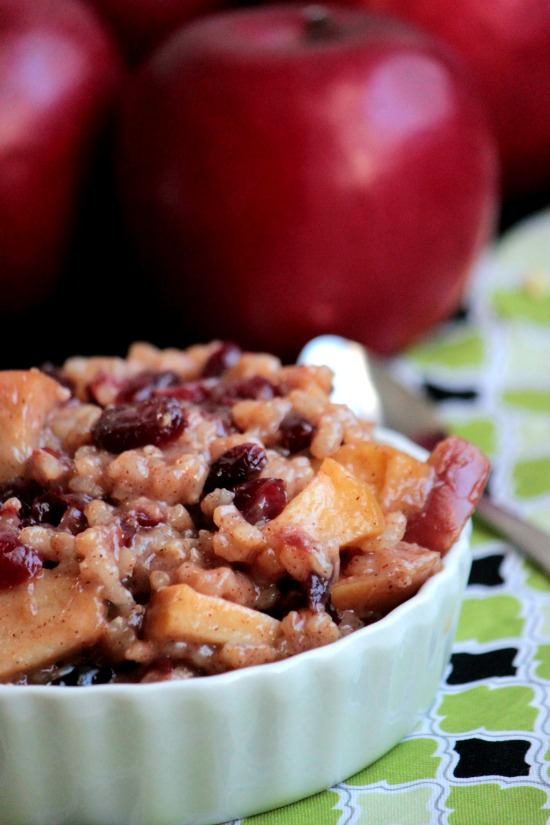 I’m guessing that you can figure out what direction I went in for this recipe, right? 😉

So, I’ve actually never had a Dessert Risotto before this. I wasn’t even sure if that was a thing but my Italian “sister” Nicole assured me that it was indeed a thing and that my idea sounded pretty delicious.

I wanted something different and new. I literally stood in my kitchen and pulled out random ingredients from my pantry while I was looking for dessert inspiration. 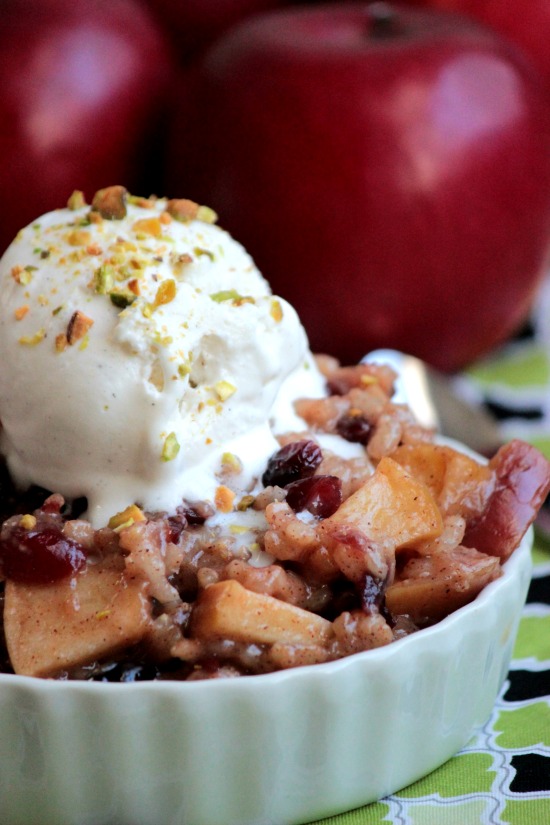 One of the items I pulled from my cabinet was a bag of Arborio Rice, really I pulled this out with the intention of grabbing the item behind it but as I stood there with the Arborio Rice bag in my hand talking to BigBear about ideas, I glanced down at the bag of rice.

“Why, haven’t we used all of this yet? I love Risotto. Why is there any of this left?”

And then it hit me! What if I made an Apple Risotto! BigBear raised his eyebrows at me and my brain went to work. 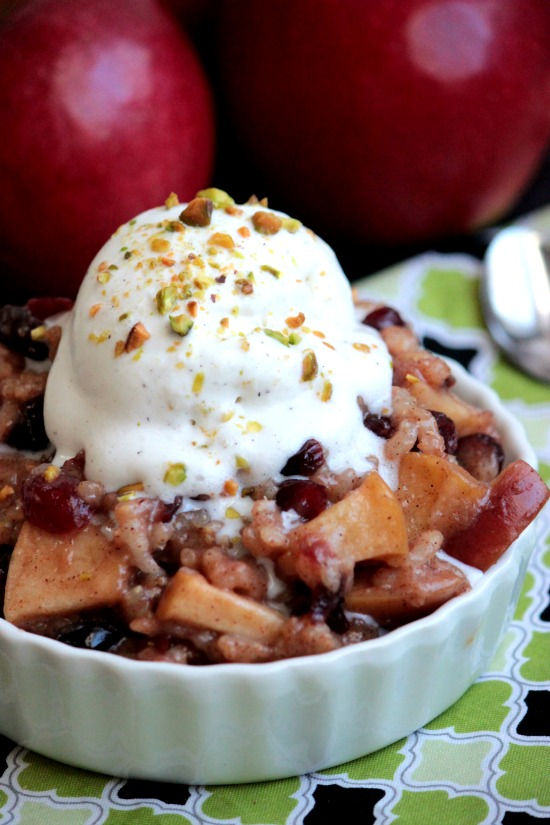 Since this idea popped into my head on a Tuesday evening, I had all week to test out this idea and recipe for dessert risotto that was flying through my head.

After successful trials and taste tests, I remade it over the weekend for photos, topped it with vanilla bean ice cream, sprinkled it with a few crushed pistachios and fell in love. It was indeed possible to make dessert risotto and it was oh so good too! 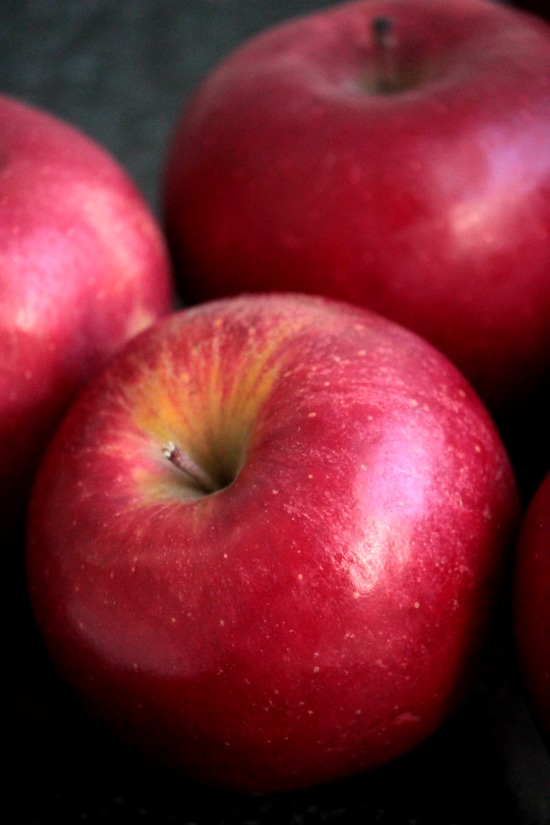 Side note: So let me tell you about how the universe works haha. Someone or Something out there really wanted apple risotto to happen asap because while I was in in VA working on an apple risotto, my friend Lauren in NY was working on one too!

Ours are a bit different thought, as hers is a breakfast risotto and mine is a dessert but I was blown away as to how our brains were on the same awesome path. Without knowing it, we were both on the same idea path.

I only knew about hers when I went to Google “Apple  Risotto” when I was ready to work on something for this post and I scrolled down and saw her post! (Ps. if you ever think that you have an awesome recipe idea, DON’T Google it, haha. Believe me, someone has already made it or made something like it lol, just make it)

As soon as I saw it I messaged her and I was like yeah, you’re never gonna believe what I just got done working on. haha

Want to check out her breakfast risotto? You can find it here: Breakfast Risotto with Apples and Raisins

Lay the  chopped apples out onto a baking sheet. In a small bowl, combine the melted butter,  1 tablespoon cinnamon  and 2 tablespoons brown sugar. Stir.

Brush the brown sugar mixture over the apples.

For the Risotto, pour the Arborio Rice and 1 ½ cup water into a medium sauce pan. Stir.

Remove from the heat. Stir in the vanilla. Pour into a large bowl and stir in the apples and craisins. Serve Warm, topped with Vanilla Ice cream and Crushed Pistachios.

Ps. Don’t forget about the awesome giveaway sponsored by New York Apple Growers that’s going on right now! You can find it over on my Apple Pie Doughnuts recipe post!