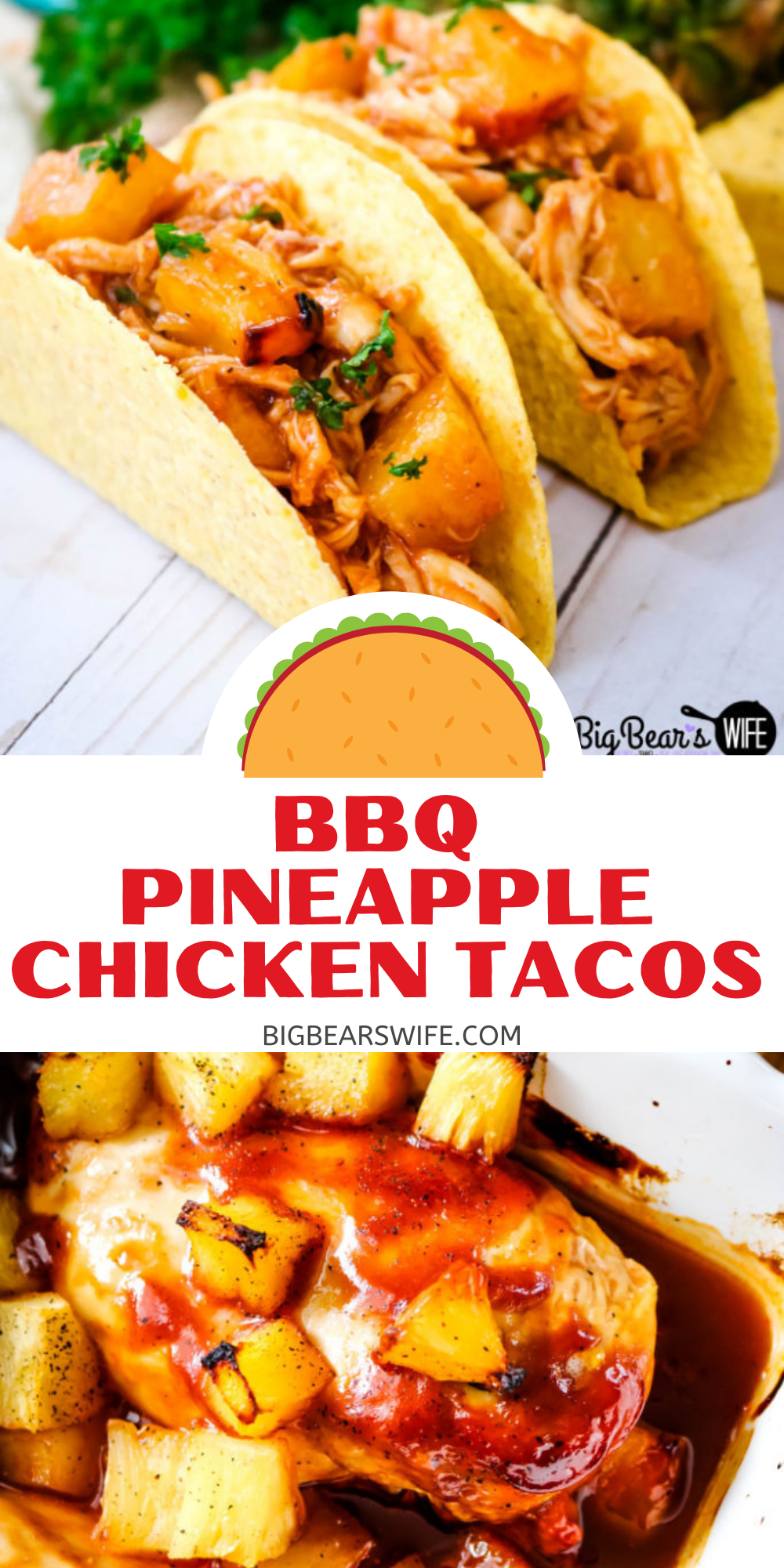 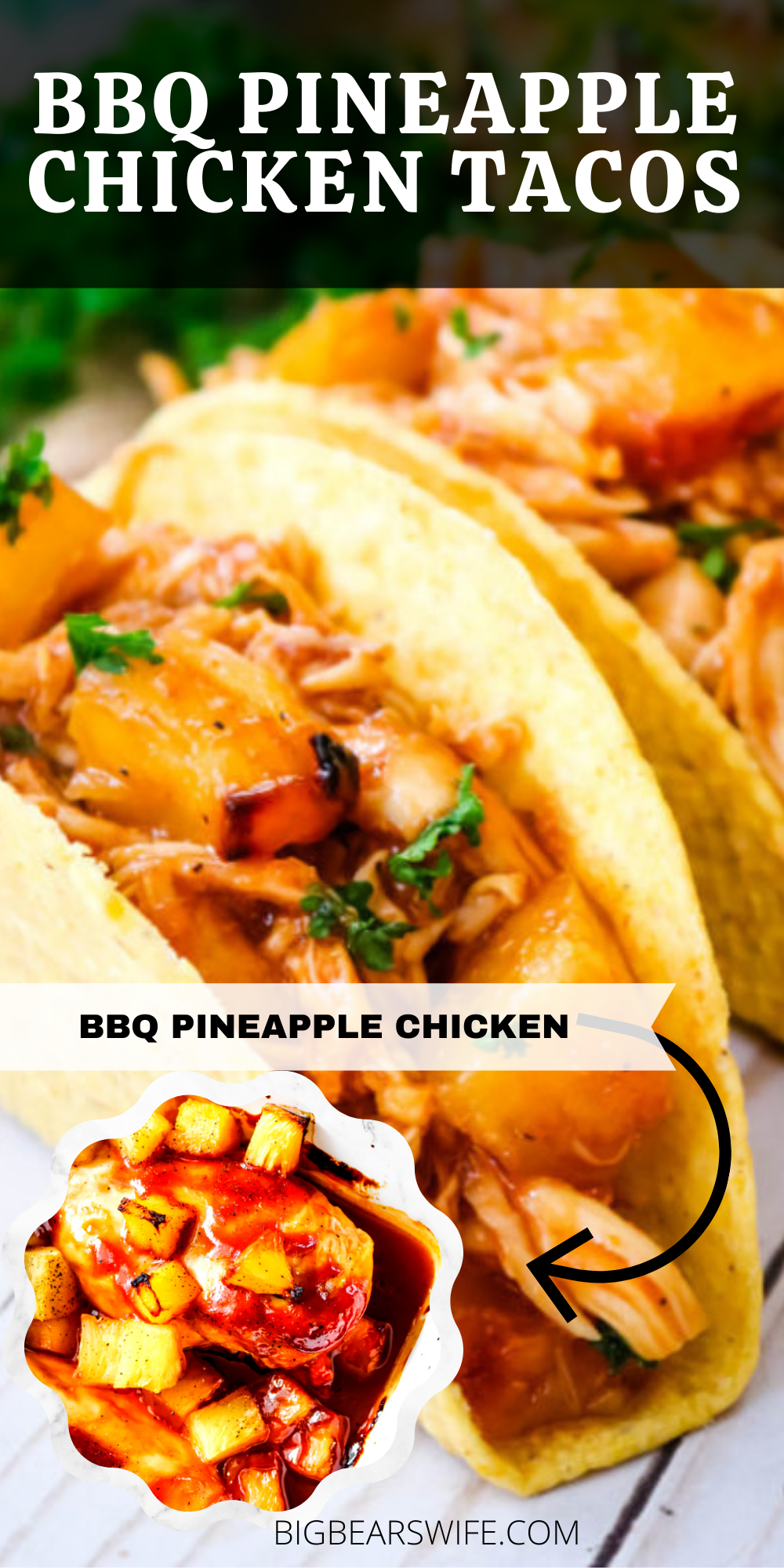 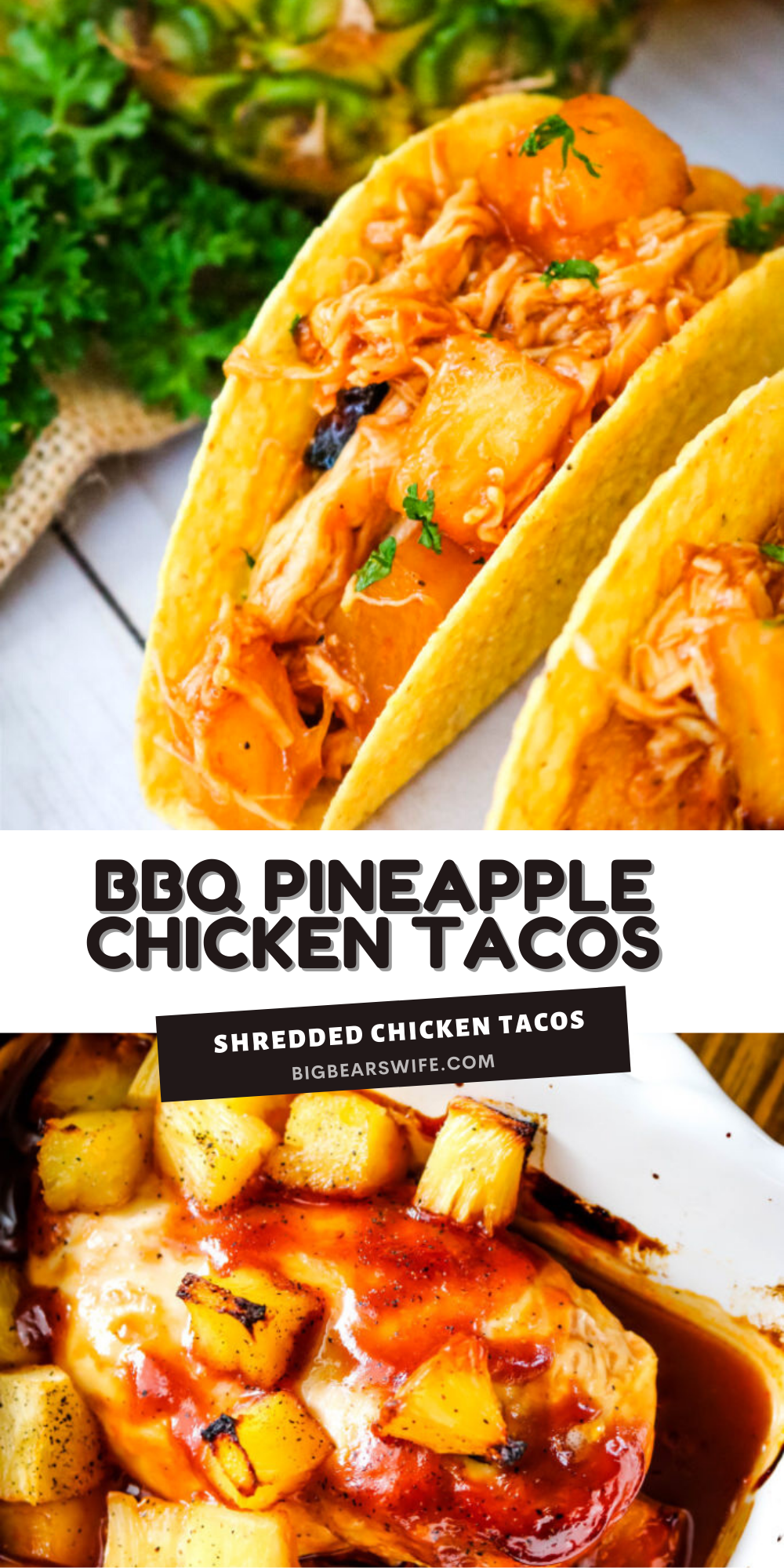 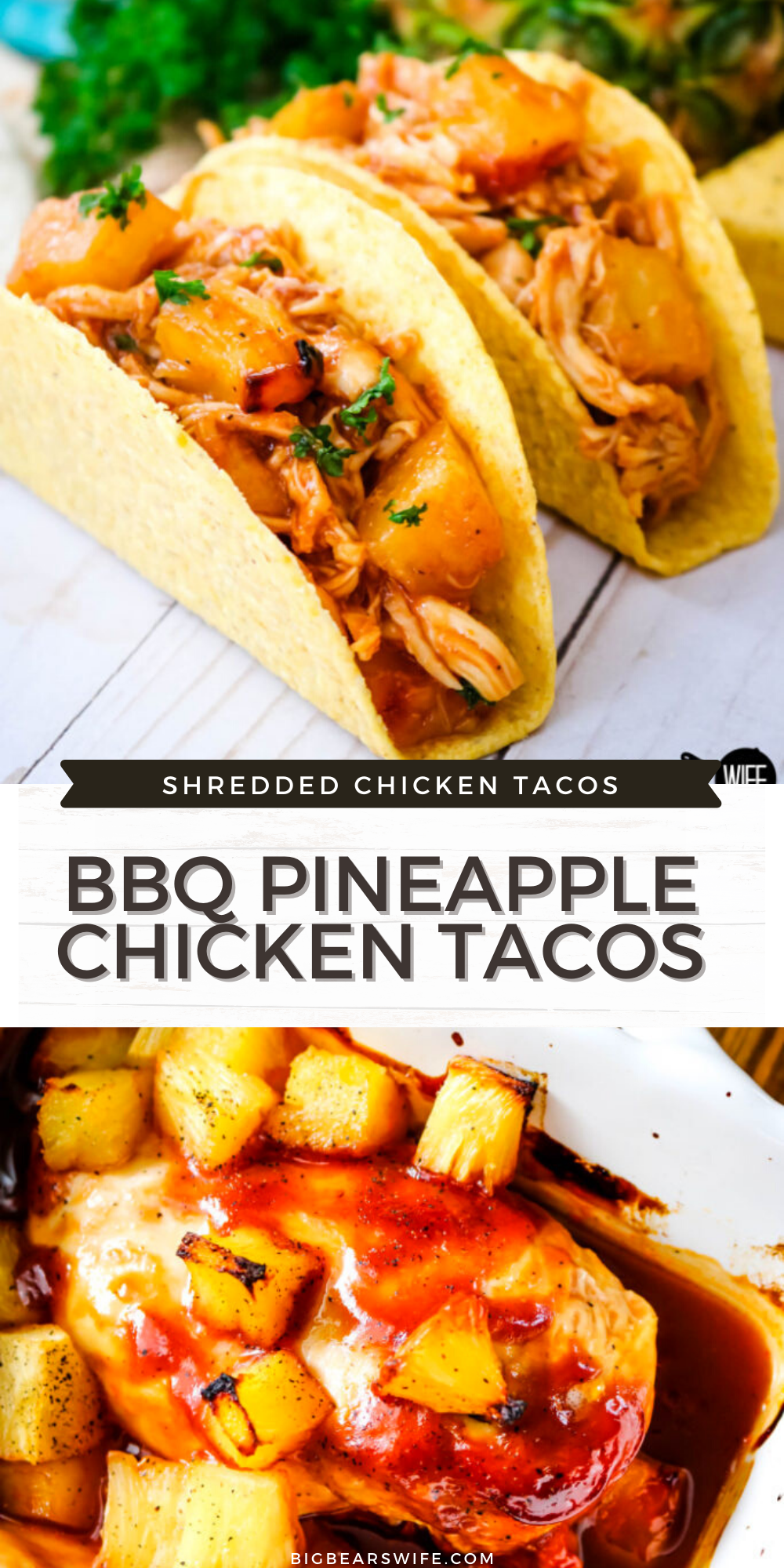 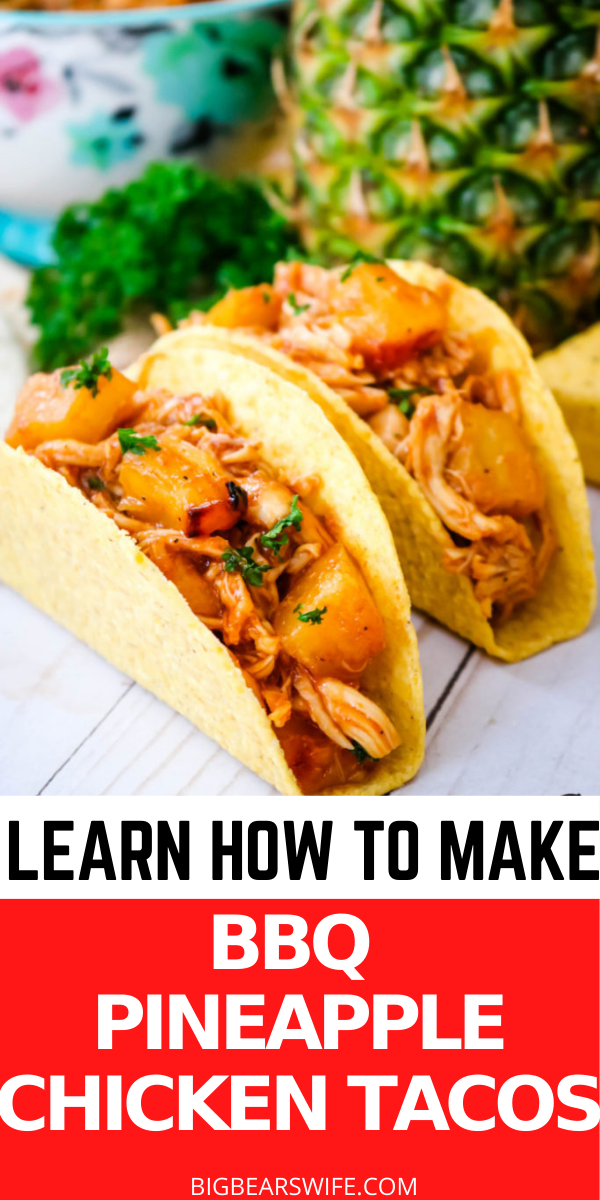 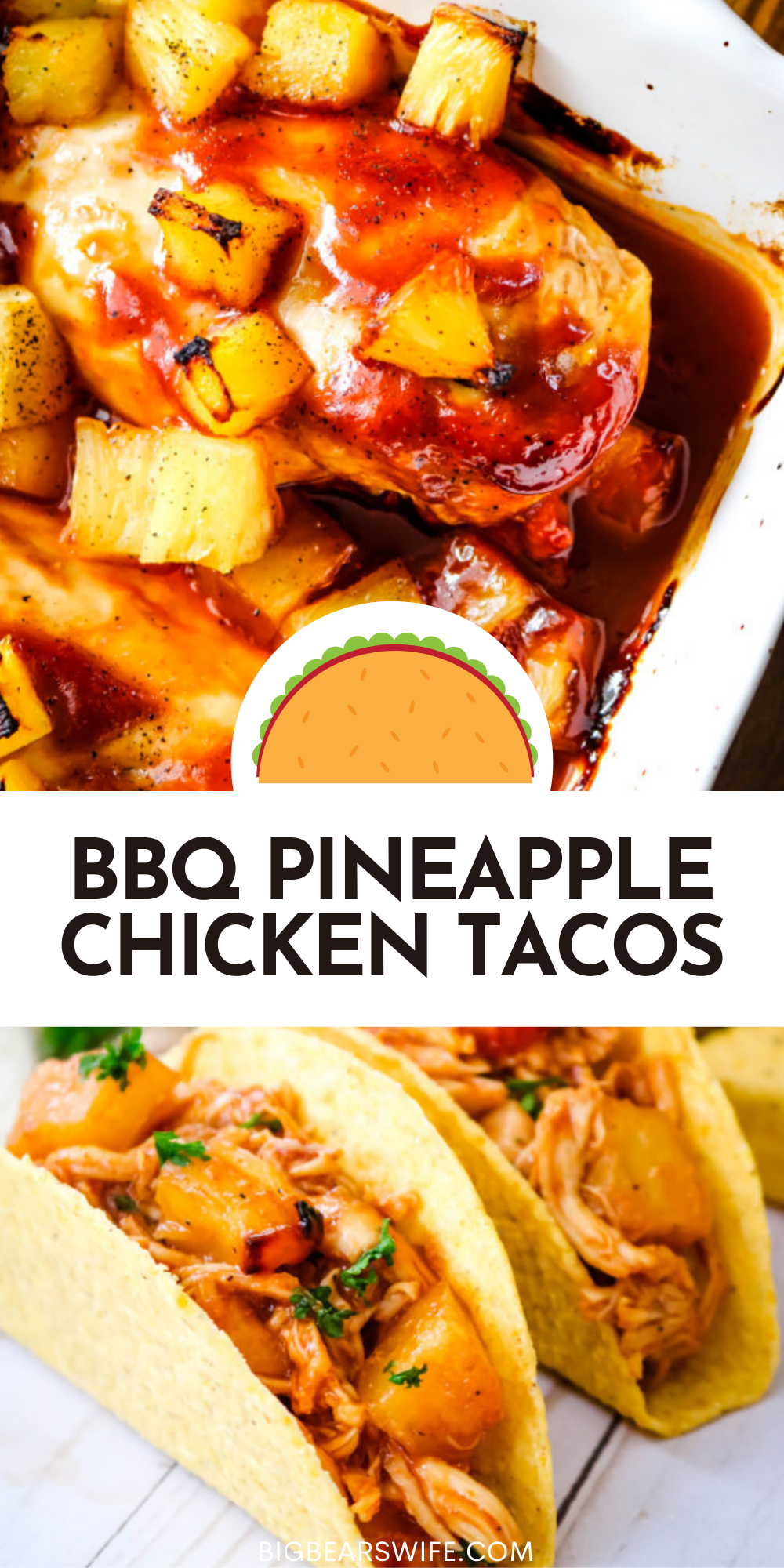 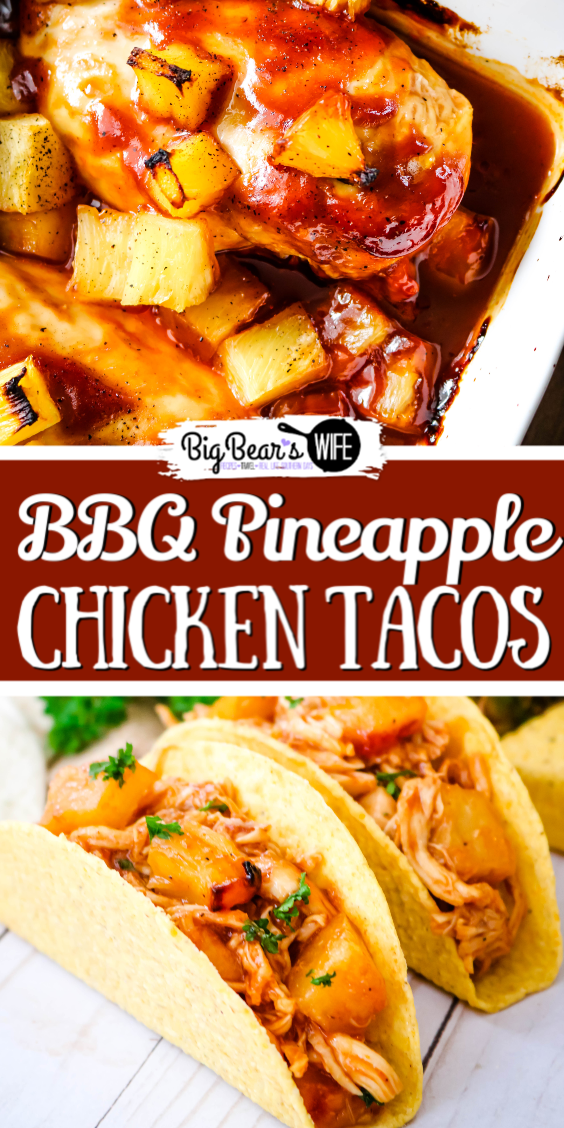 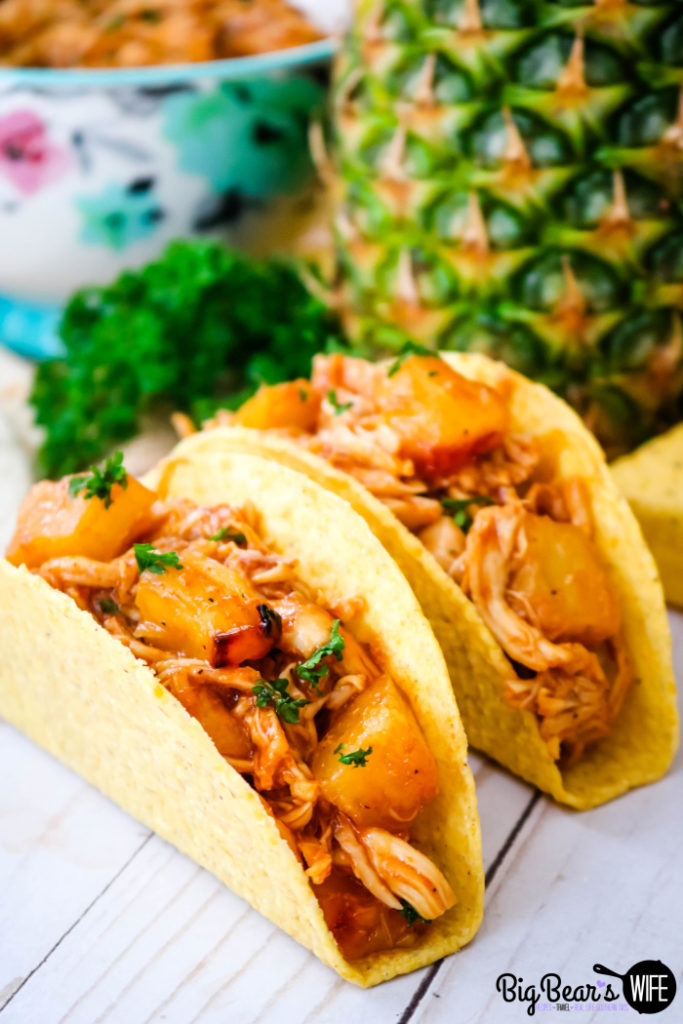 I love collecting recipes. My recipe collection contains recipes that I’ve collected from friends, family members, magazines, TV shows and other blogs. I’m a strong believer in the fact that recipes should be shared, adapted, altered, loved as is and used as inspiration for totally new creations.

While these BBQ Pineapple Chicken Tacos aren’t a totally new creation, they were inspired by my love of BBQ and Pineapple but brought to life thanks to a tasty recipe for BBQ Pineapple chicken that I found online.

While searching for the best way to bake up pineapple chicken for BBQ tacos I found Katerina’s recipe for BBQ Pineapple chicken on her blog, “Diethood”.  I decided to use that recipe, add a bit more chicken and BBQ and cook it for just a tad longer before shredded it, adding more BBQ sauce and turning that recipe into these tasty BBQ Pineapple Chicken Tacos. 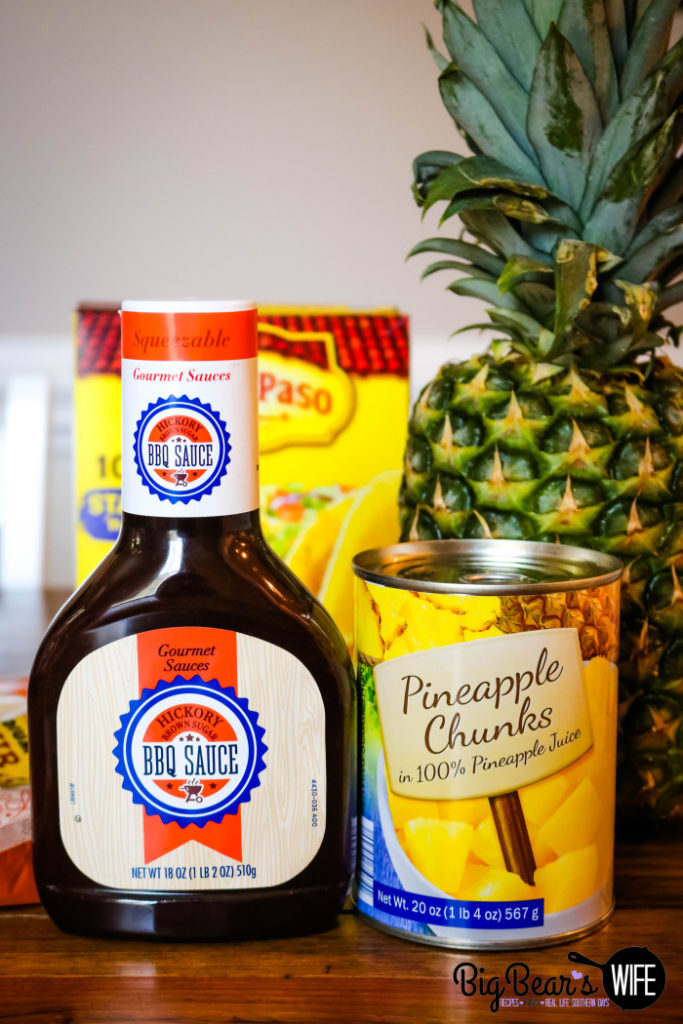 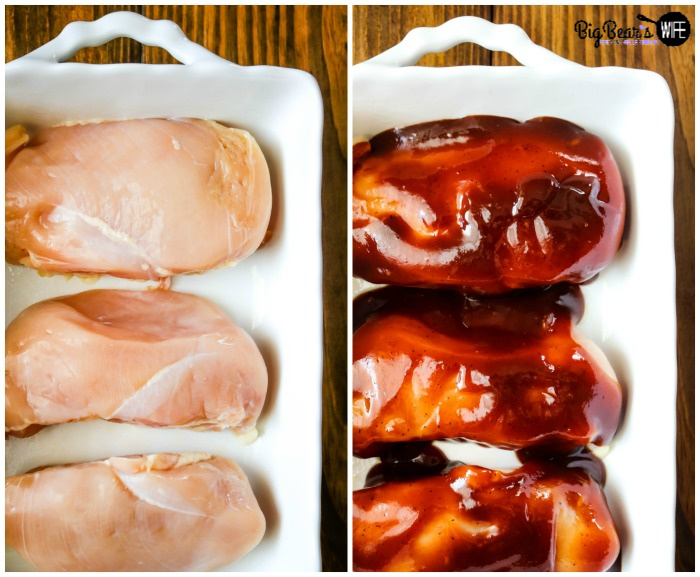 This recipe is super easy and it starts off with boneless, skinless chicken breasts, olive oil, salt, pepper and BBQ sauce.

I use a 1.5 qt baking dish when I make this chicken and it’s perfect for about 3 chicken breasts. I like to rub the casserole dish down with a little olive oil before adding the chicken to the pan. Then a sprinkle of salt and pepper on each side of the chicken gets it ready for it’s BBQ bath.

A bit of BBQ sauce smothered on top is just what this chicken needs!

A note about the BBQ sauce. You can really use any type of BBQ sauce that you’d like to use for this chicken. You could use a homemade sauce, a bottled sauce, regular BBQ, honey BBQ, Brown or Brown Sugar BBQ sauce.

The first few times I made this BBQ pineapple chicken for the tacos I used Brown Sugar BBQ sauce. I loved it but my husband thought it was too sweet. When we went to the beach at the beginning of June with the family, I made it using Stubbs brand of  regular BBQ sauce and Thomas said it was perfect. So go with which ever BBQ sauce you think you’re going to like the best. 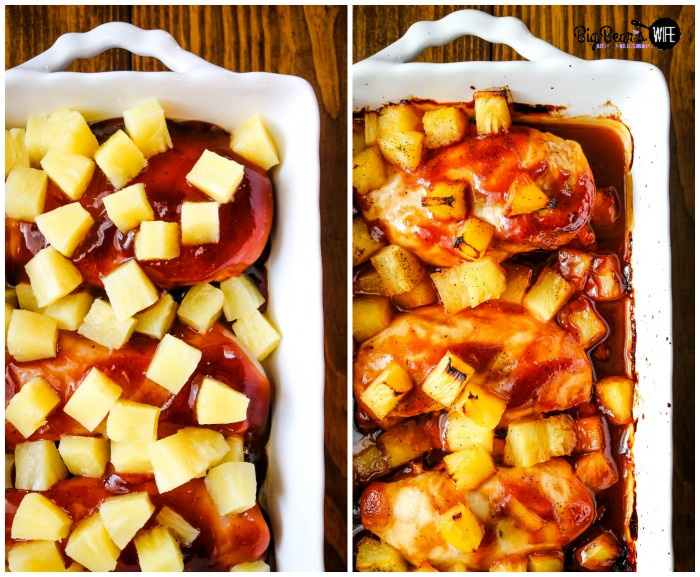 For the pineapple part of this, fresh or canned pineapples will work. 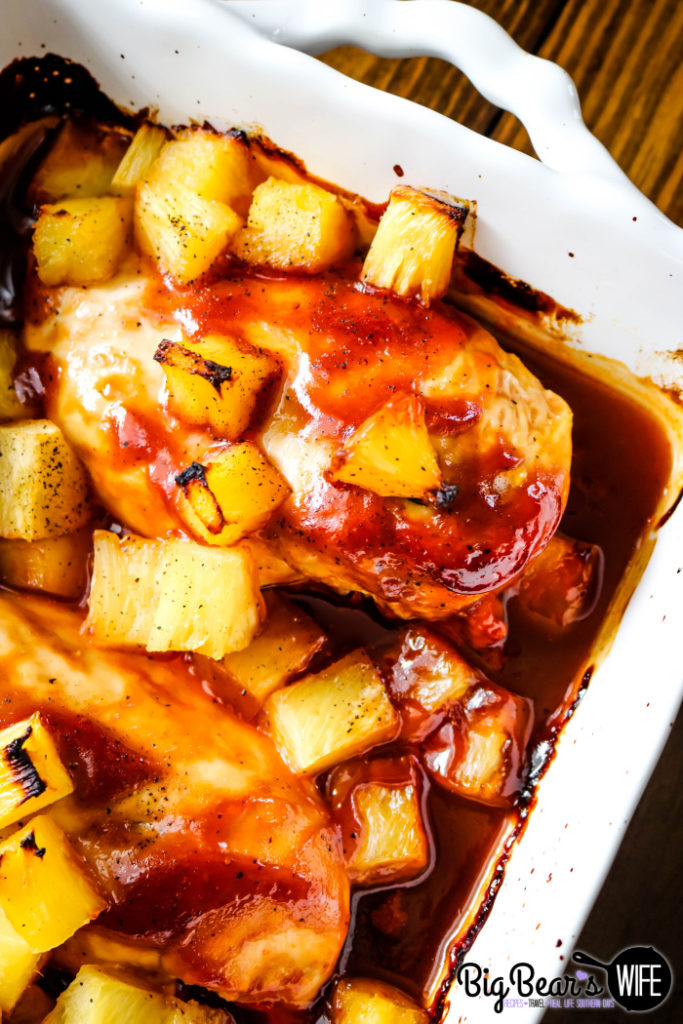 Time to Shred the chicken!

Once the chicken has baked it’s time to shred it for some tasty BBQ Pineapple Chicken Tacos!!

You can use two forks but Thomas prefers to use these crazy Bear Claws BBQ Meat Handler Forks. hahaha They actually do shred it really quick and easy. 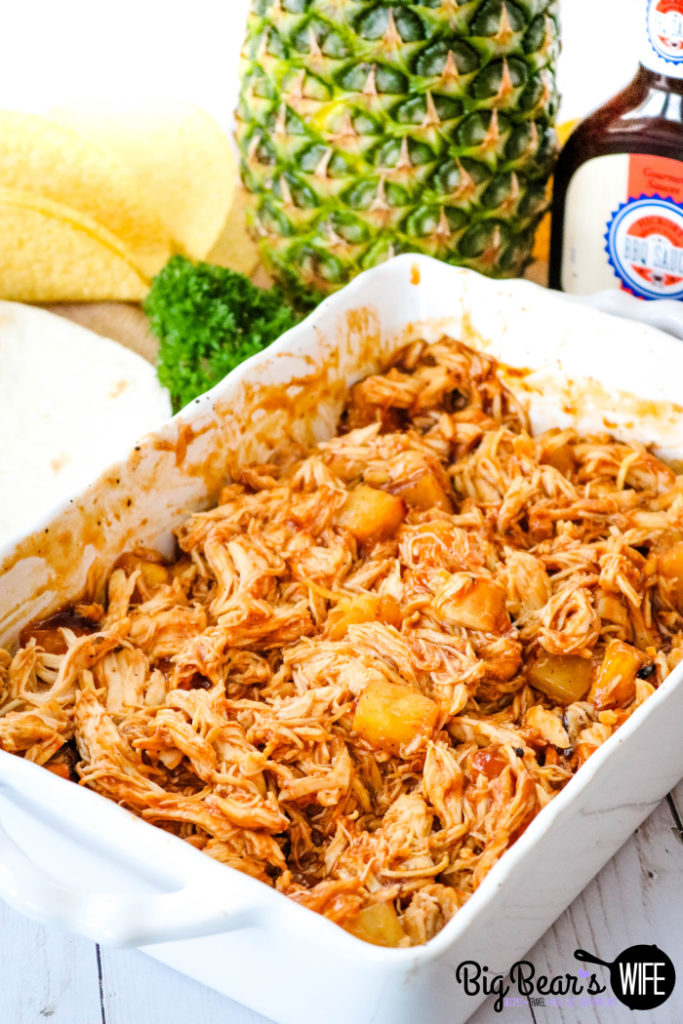 Would you like a Soft Taco or a Hard taco Shell?

The only thing left to do is to make your tacos! I prefer the soft taco shells because I like to wrap mine up like a burrito but m y husband and son love to use the hard taco shells or these! 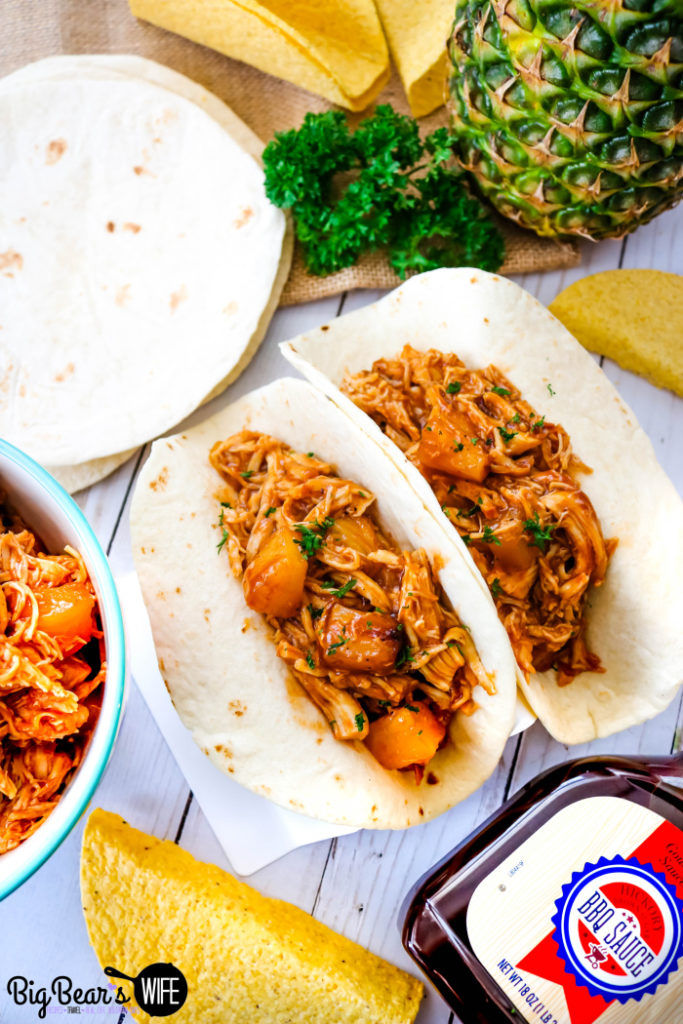 Yep! I’ve tried this with Brown Sugar BBQ sauce and Regular. Both were delicious. You can also use homemade BBQ Sauce.

You can! You may need to adjust the cooking time a bit. Just make sure the chicken is done before shredding it for the tacos. 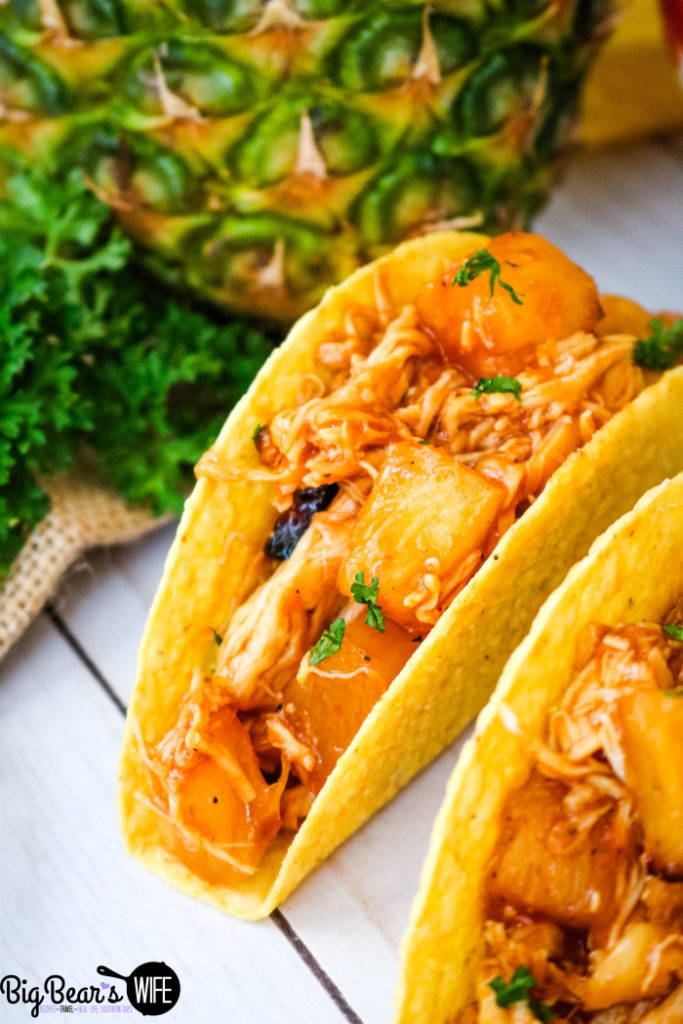 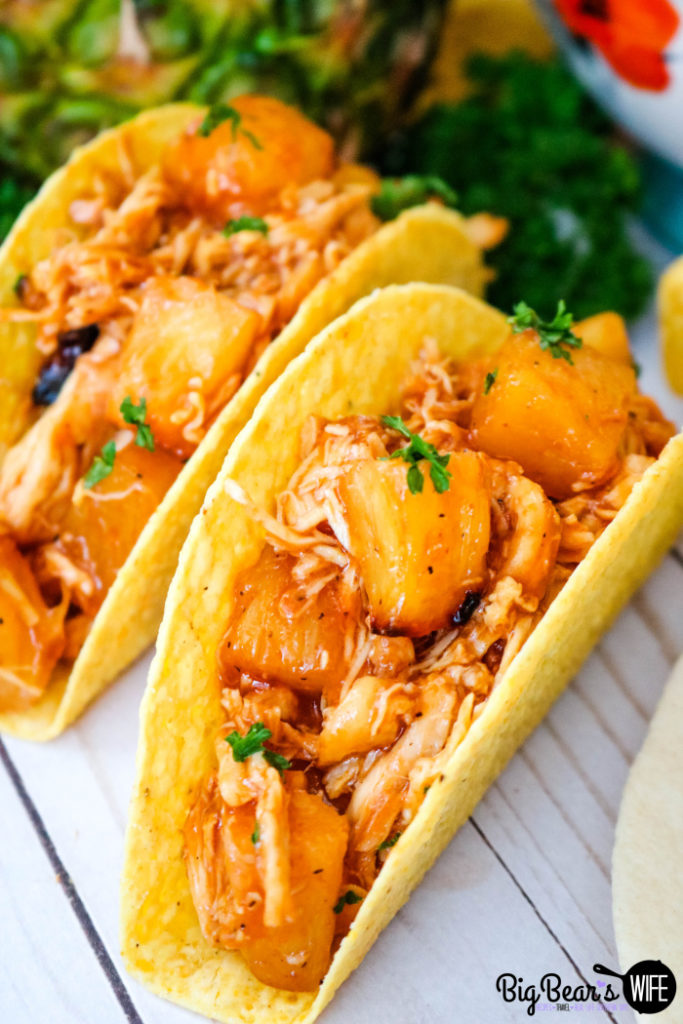 Sprinkle chicken with salt and pepper.

Bake at 400F for 1 hour or until chicken is done. Chicken needs to reach 165F if you\'re checking with a meat thermometer.

Remove from oven and shred chicken. Stir in 1/2 cup of BBQ sauce or more until chicken is well coated. 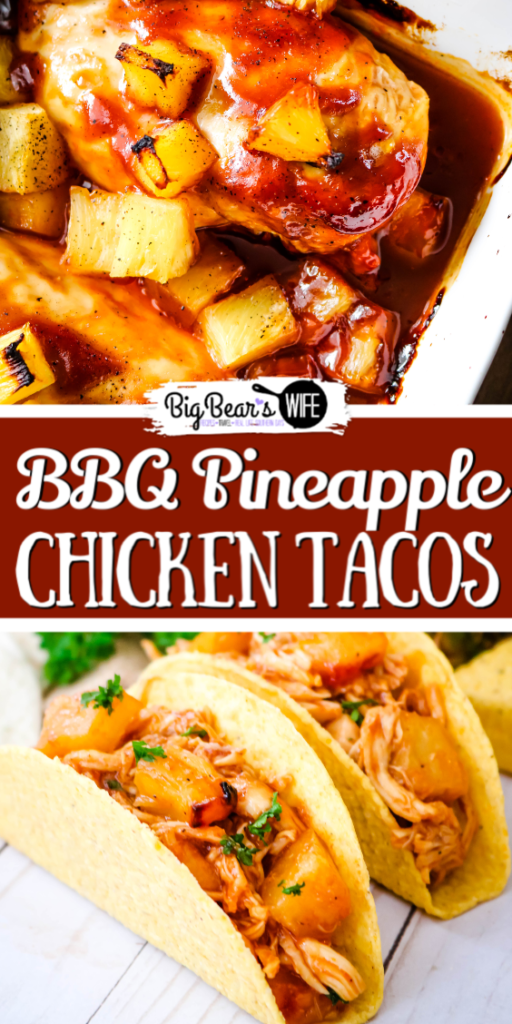