You’ve got about 9 days to come up with your Thanksgiving day menu. Are you ready? Have you picked out everything that’s going to grace your table along side of that perfect Turkey? Yeah… me neither.

I’m a slacker… what can I say.

I know people that have already planned out their entire menu for Thanksgiving and all I know is that I’m having turkey and “other stuff”. 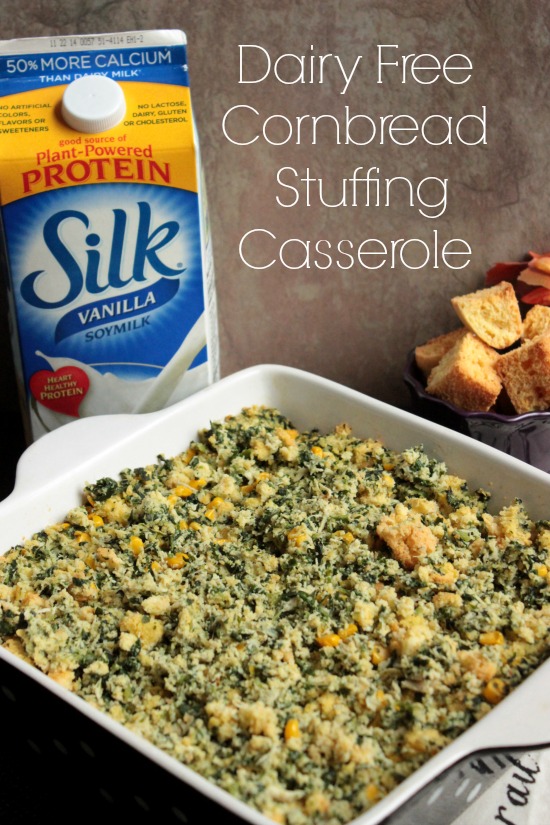 That’s pretty bad isn’t it. Oops. Well that’s ok. I’ll probably sit down with my mom this weekend and figure out exactly what we’re going to be having.

Mom really wants to have Thanksgiving at her house this year so maybe I’ll only have to be in charge of one dish this year! *yeah right* hahaha

So while I have casseroles and side dishes and pies rolling through my mind, let me show you this Dairy Free Cornbread Stuffing Casserole and add another idea in there for your Thanksgiving day menu! 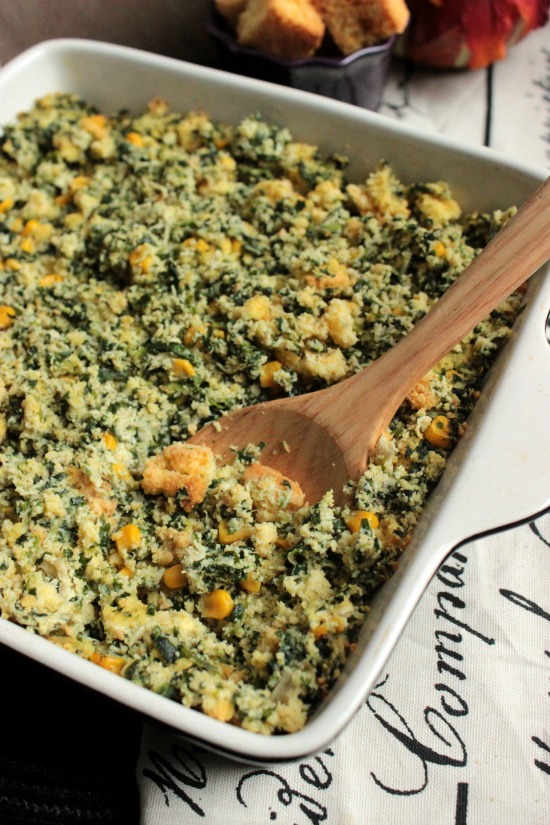 I’m all for stuffing that’s cooked outside of the turkey. I like the way stuffing looks when it’s in the bird but I would much rather pile my plate sky high with stuffing that hasn’t been hanging out inside of Ms. Turkey while she’s been roasting away. 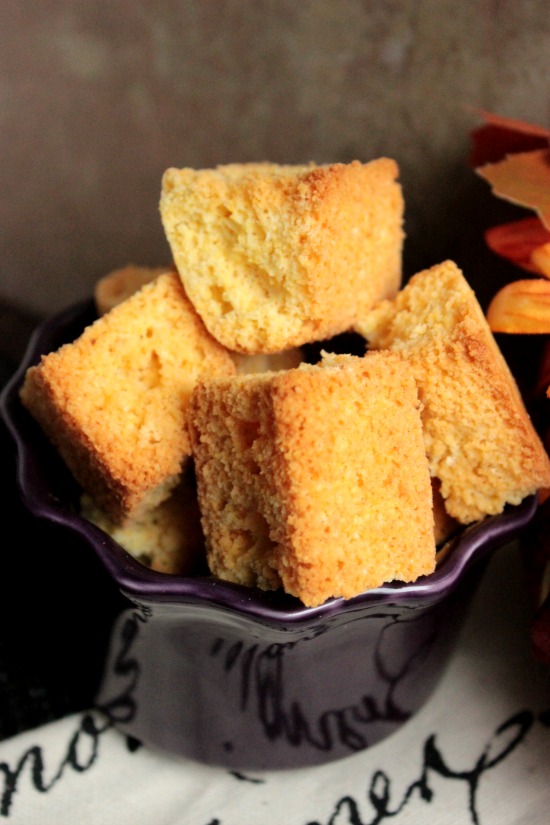 I literally had every thing I needed for this Casserole already in my pantry and freezer so it was a snap to throw together! Oh and Yes, I had everything in the pantry and freezer WITHOUT making a special trip to the store for this recipe. It pretty much includes items that I always have on hand! 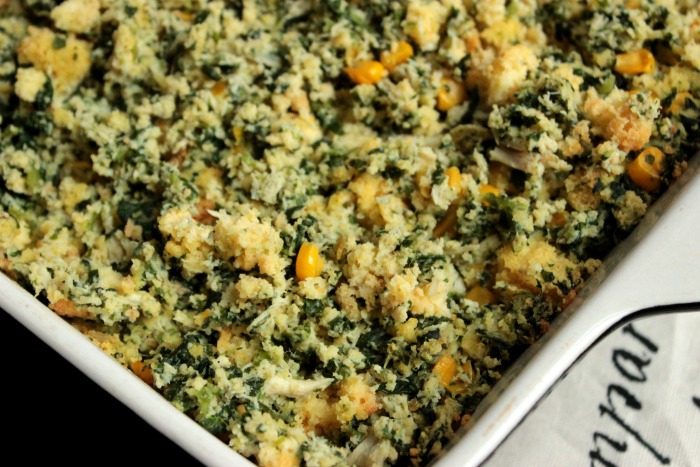 I fixed up the cornbread with Vanilla Soy milk instead of regular milk (a tip from my friend Anne!), baked it up, cut it into cubes and roasted them to crisp them up. After that I tossed shredded chicken, vanilla soy milk, chicken stock, corn and spinach into a bowl with the cornbread cubes and popped it into the oven after a quick seasoning of salt and pepper.

When it’s done, you’ll just fluff it with a fork and serve! There, ya go! That’s one recipe that you can mark as “done”. 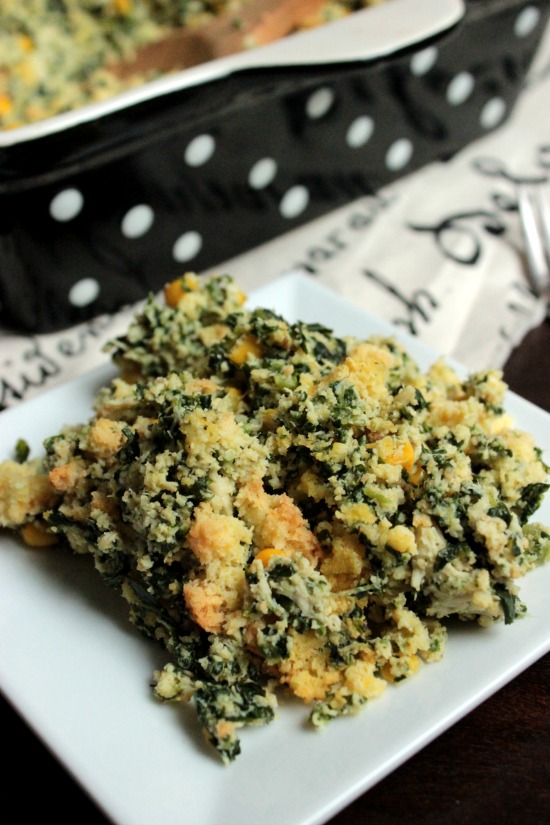 So here is a side note for y’all!

I was really worried about putting salt and pepper measurements in this recipes, mainly because everyone’s taste buds are different when it comes to salt and pepper.

It’s amazing how much flavor salt and pepper can give to a dish but don’t over salt it! Please use your best judgement!

We hardly eat salt so it only took a pinch for me but if you really like to load on the salt and pepper you might need more. 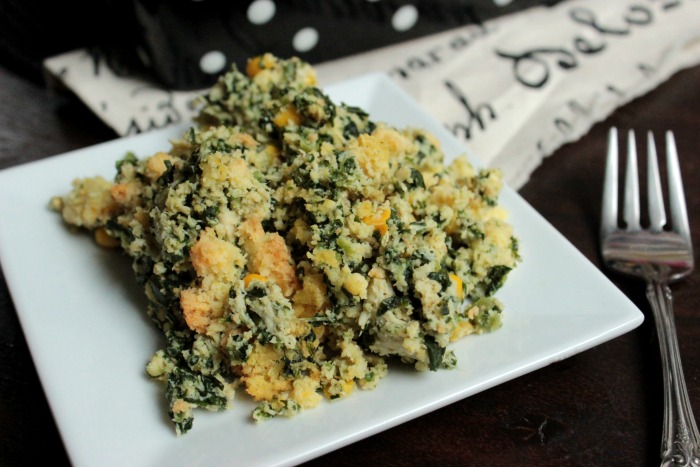 Fill a medium pot with water and season with 1 tablespoon of seasoning salt. Add chicken breast and bring water to a boil. Cook until chicken is done (and white).

Remove from water and let cool.. Shred the chicken. (I use my stand mixer to shred chicken!)

In a medium bowl mix together the cornbread mix, eggs and 2/3 cup Silk Vanilla Soy Milk.

Let rest for 5 minutes and then pour into a greased 9×9 pan. Bake for 20 minutes or until done. Remove from oven and let cool.

Cut cornbread into large cubes and spread them out onto a baking sheet.

In a large bowl mix together the shredded chicken, broth, spinach, corn and 1 cup Silk Vanilla Soy Milk. Season with salt and pepper. Break cornbread cubes in half and stir into spinach and corn mixture.

Pour stuffing casserole into a 9×9 dish.

Lower oven heat to 350°F and bake for 20 minutes or until the casserole is hot.

Sign up to be a Silk Member and get coupons, chances to win, recipes and more!

This conversation is sponsored by Silk. The opinions and text are all mine.

END_OF_DOCUMENT_TOKEN_TO_BE_REPLACED 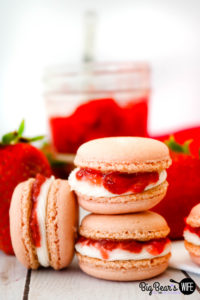 These Strawberry and Cream Macarons scream summer with their freshly made ...