A super tasty snack or a perfect party appetizer! BBQ Chicken Pull Apart Bread is made quicker with a rotisserie chicken from the deli! 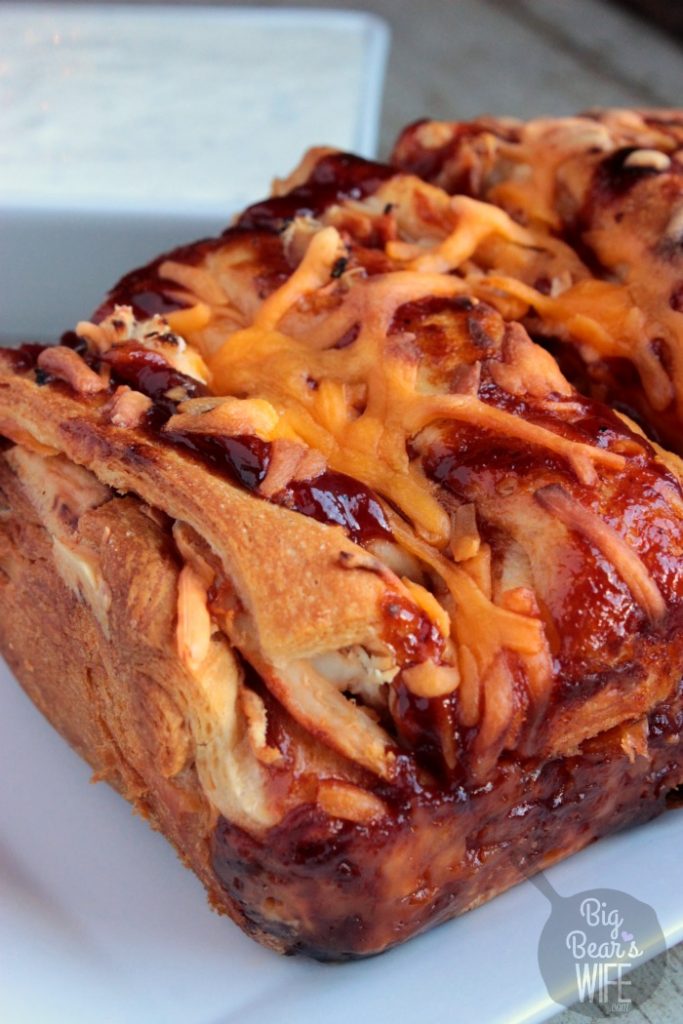 The tree is glowing, the fire place is roaring and there are gifts wrapped under the tree! For the first time in years I’m actually ready for Christmas and it’s not the day before Christmas! hahaha

I have pretty much all of the presents bought except like one and all of the decorations are out and where they’re suppose to be. We limited the number of people that we were buying gifts for this year and that really cut down on the stress. Not only did we limit the number of people we were buying for this year but we also limited the amount of presents.

I know that might seem kind bad but it really isn’t. We just didn’t want to buy people junk that they didn’t want or need. We thought that 1 or 2 awesome presents that they would really love would be better than a bunch of small stuff and our family agreed.

How do y’all do Christmas at your place? Lots and lots of presents or just a few big ones? This is our first year of putting limits on things haha so we’ll see how it goes. 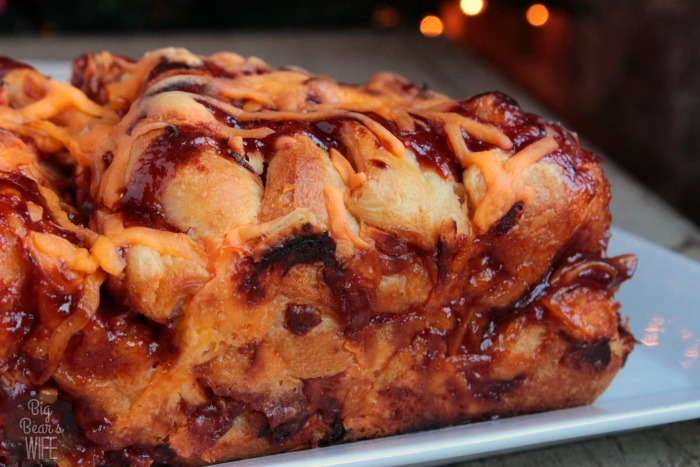 Another thing we’re doing different this year is the food for Christmas Eve. Normally Christmas Eve is a big dinner kind of thing but this year we’re changing it up. We’re going to try to do finger foods instead.

My dad is going to cook a ham and then we’re going to just serve little snacks and appetizers to go with it!

With that in mind I’ve been trying to work on some new appetizer and snack ideas.

This BBQ Chicken Pull Apart Bread is one of those ideas. 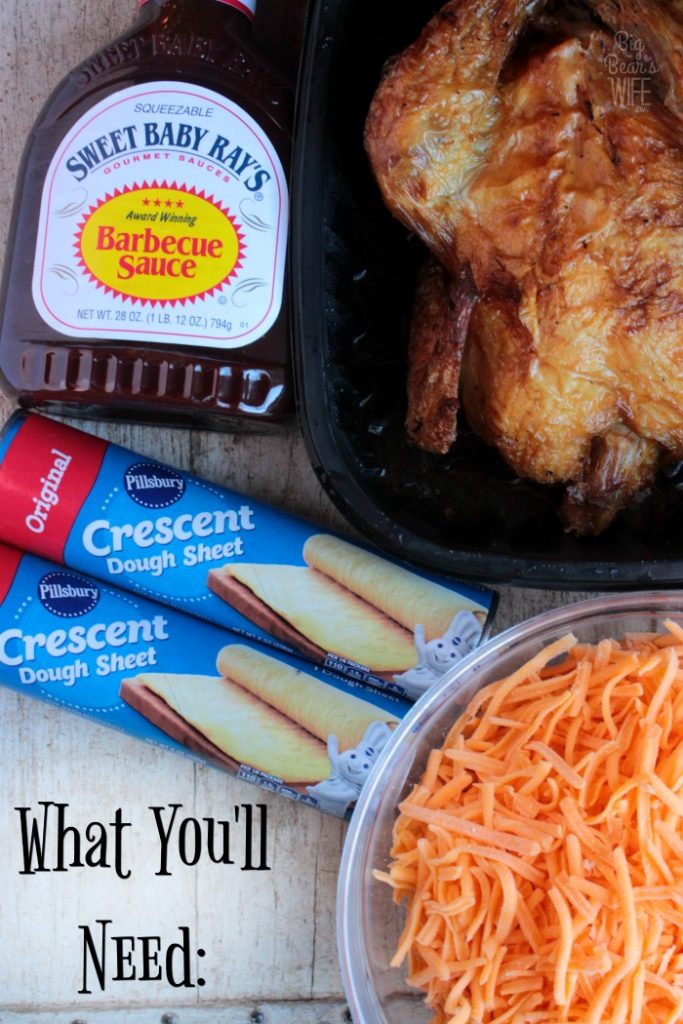 This is what you’re going to need:

Rolls of crescent dough sheets work well for this recipe, I found these over with the biscuits and crescent dough rolls. If you can’t find the sheets you can use pizza dough or regular crescents. 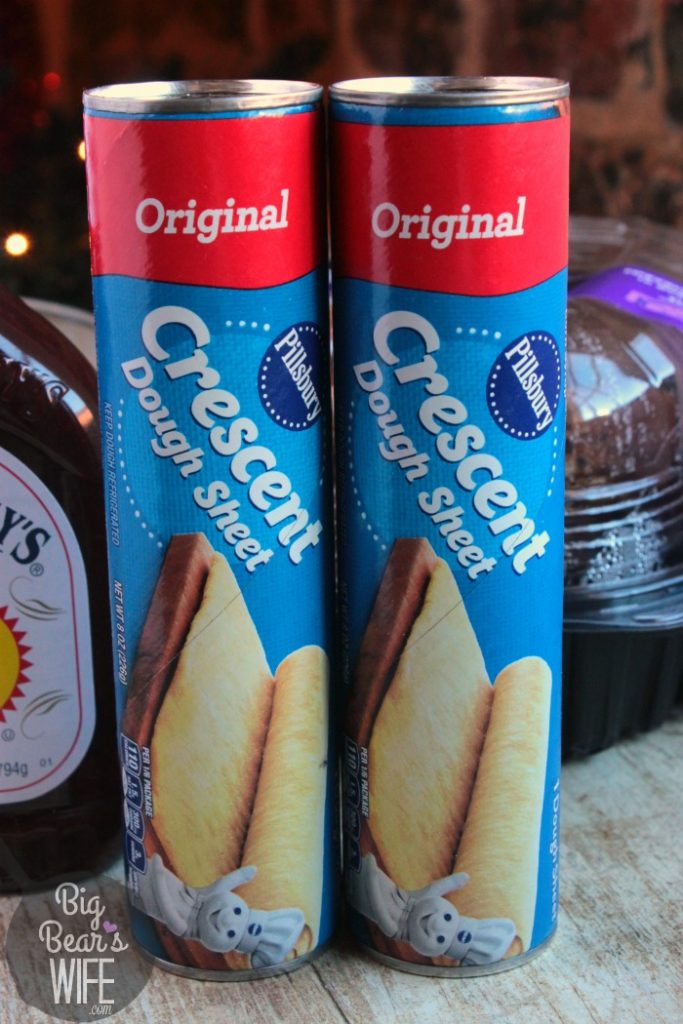 Also, you can totally bake or roast your own chicken if you want but I chose to go with a rotisserie chicken from the grocery store for this recipe to make this even quicker. 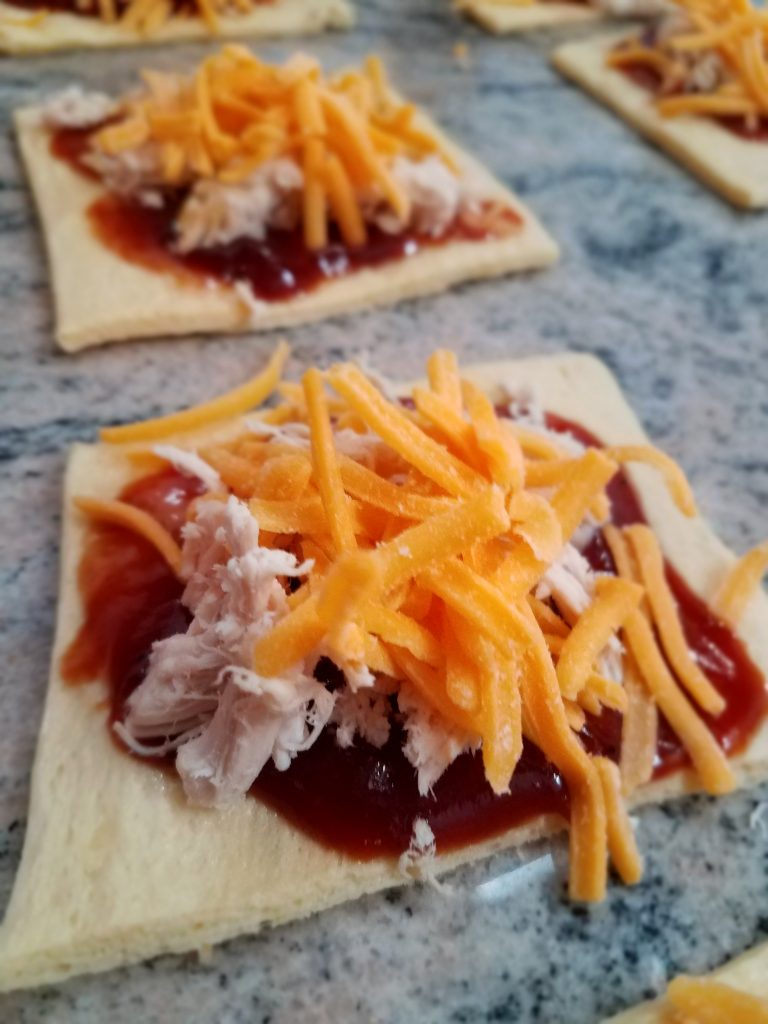 Cut your dough into squares, I got about 8 squares from each can of dough. 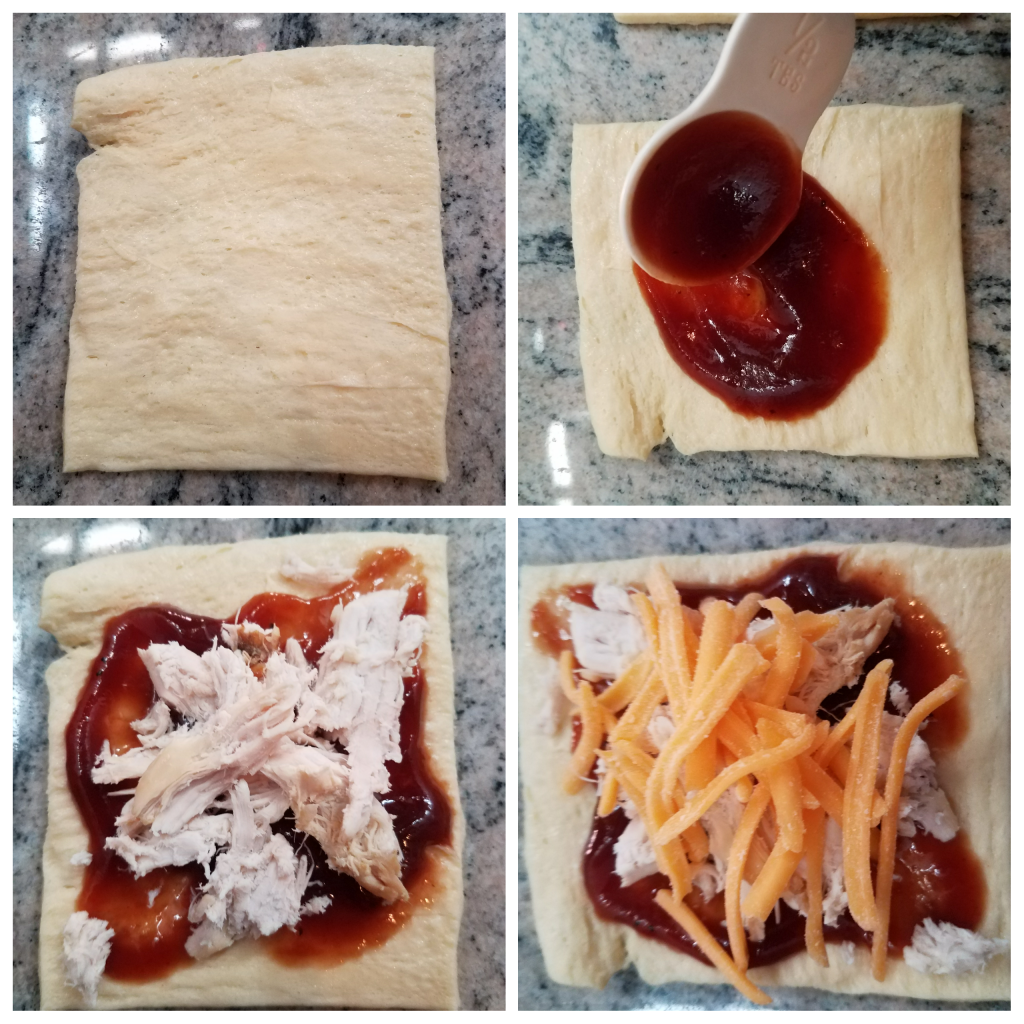 Then top each with some BBQ sauce, cheese, and shredded chicken. 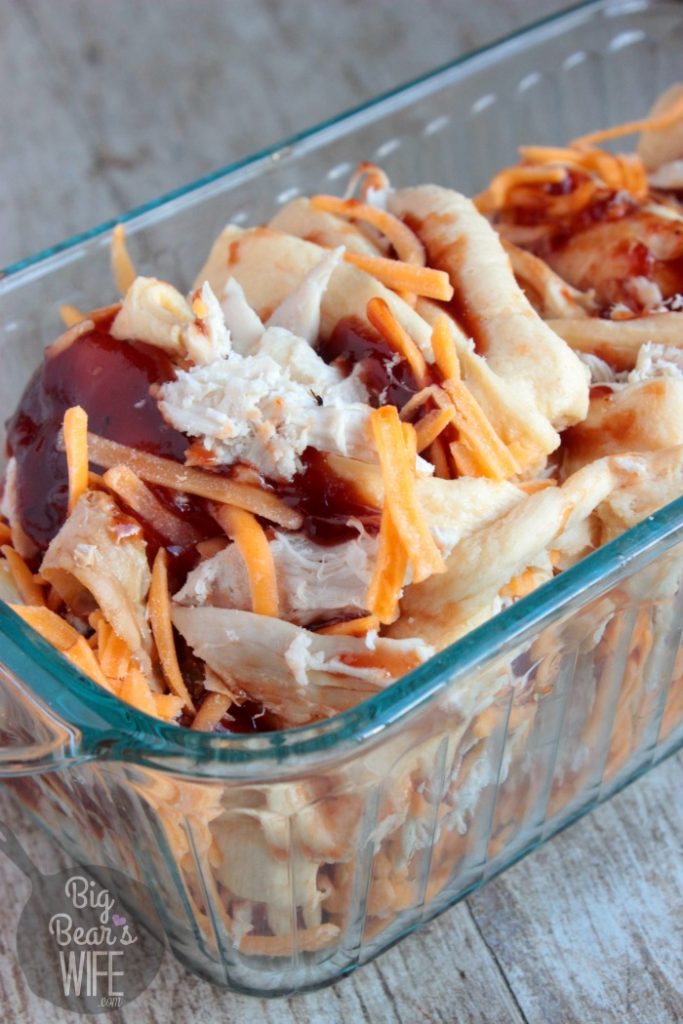 You can find the recipe and exact measurements below but I thought I’d show y’all a few pictures of what this is supposed to look like while you’re working on it. 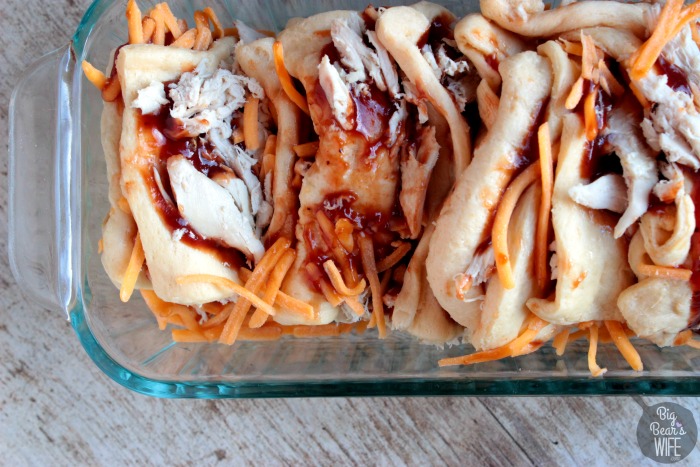 You’ll want to stack everything on it’s side in a loaf pan once you’ve loaded your crescent dough with the shredded chicken, cheese and BBQ sauce. 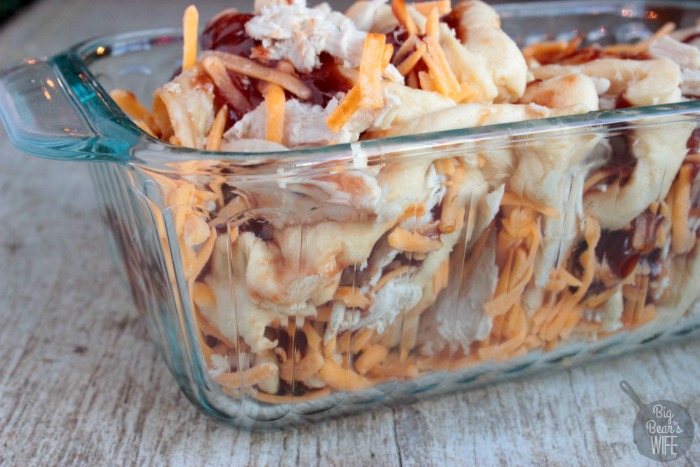 About an hour in the oven and this bread is ready to pull apart and dip. You probably want to bake this for about an hour to make sure everything is done but you don’t want the top to burn. 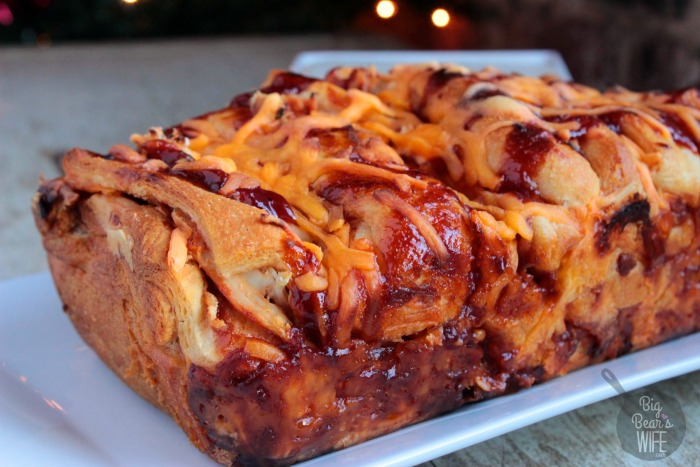 So keep an eye on it after about 45 minutes and top it with foil if you need to. You don’t want to take it out too early though because if you do the dough in the middle will be raw and no one wants that! 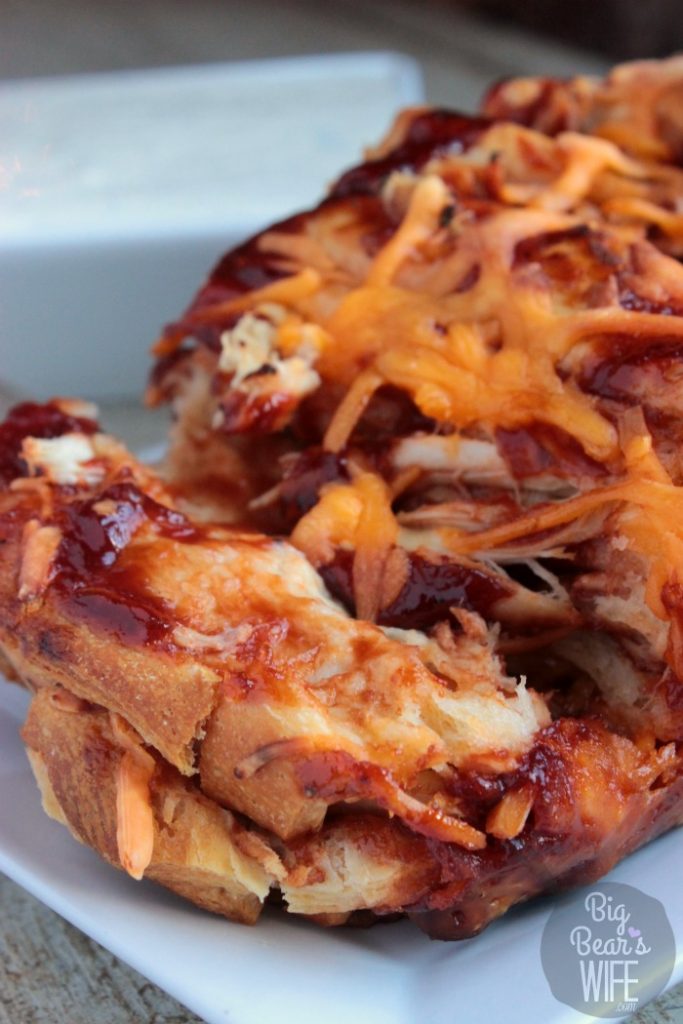 Once it’s ready go ahead and pull it out of the oven and serve it piping hot! I mean it’ll be ok later on but it’s best when it’s right out of the oven. If you wait to eat it and want to re-heat it later you may want to add a little bit more BBQ sauce when you heat it up. 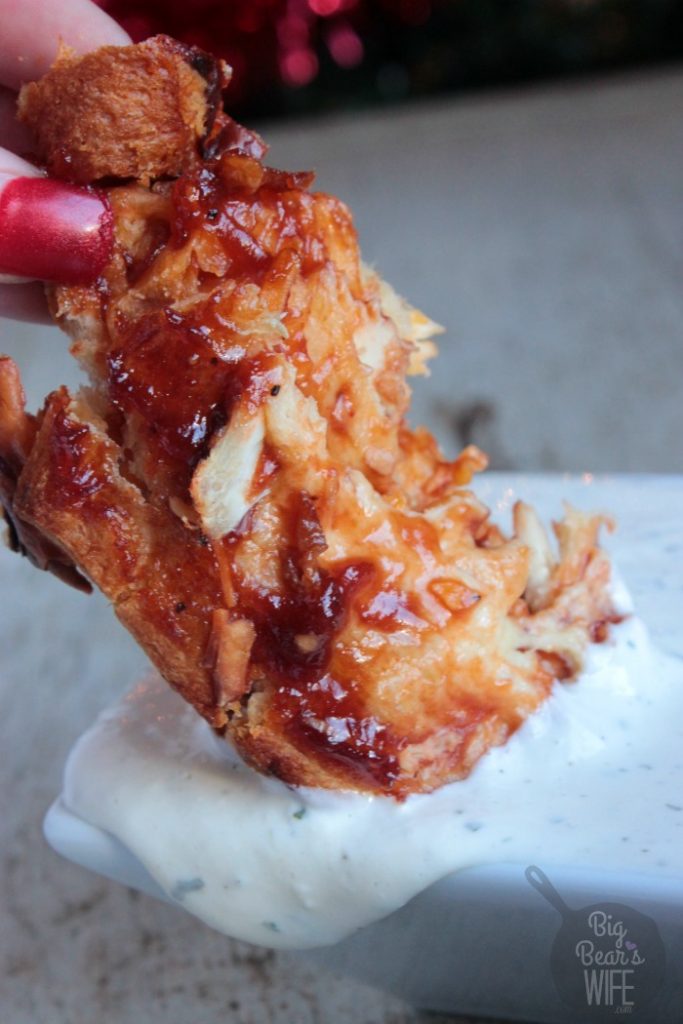 OOO and don’t forget the ranch for dipping! I just made this ranch using a packet of ranch seasoning, Duke mayo and a little bit of milk but you can make it how ever you want it.

Or use your favorite bottled ranch for dipping. Either way, you’ll love it!

Of course you don’t have to dip it in ranch at all.

Just pull it apart and eat! 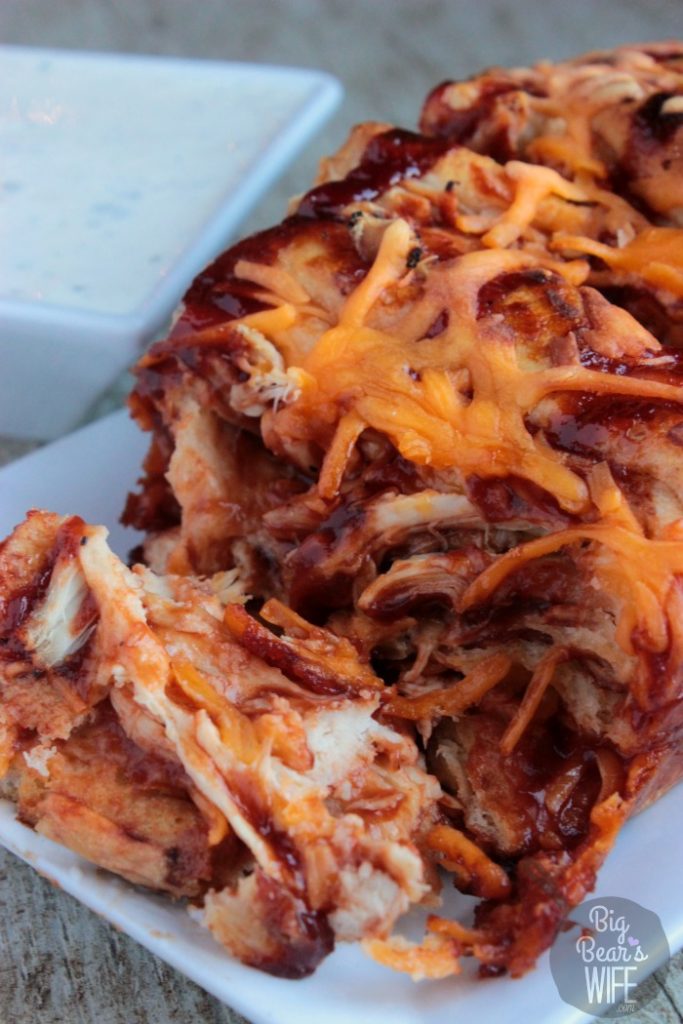 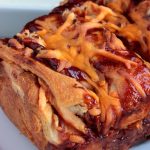 An super tasty snack or a perfect party appetizer! BBQ Chicken Pull Apart bread is made quicker with a rotisserie chicken from the deli!