If you ever take meals to friends and family in need or know anyone that does, you’ll love this new feature! It’s the A Toni Tape and Take Recipe feature! 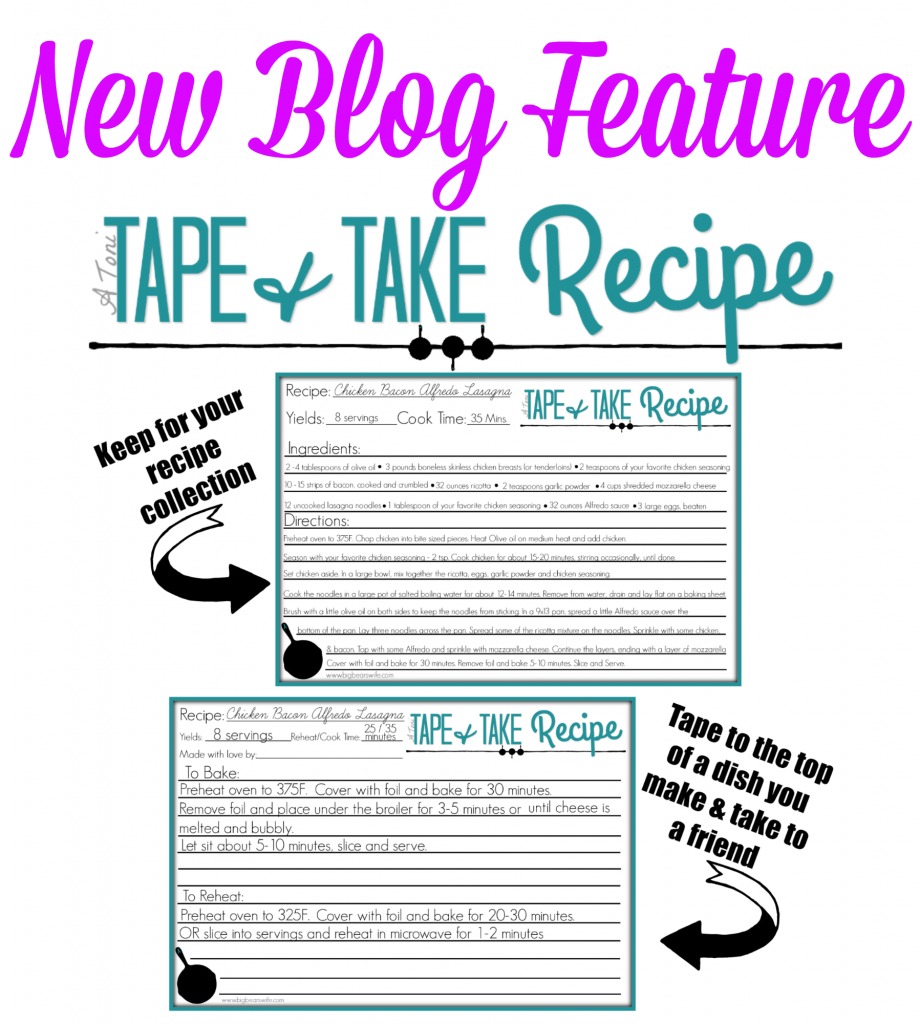 Hey y’all! I’ve got something really special to share with y’all today. I’ve been thinking about this project for a while and started working on it this week.

First I’ll tell you how this project came to be and then I’ll explain to you exactly what it is!

I know a lot of long time readers will remember my courageous friend Toni who lost her battle with Ovarian cancer last year. If you’re new to the blog you can jump over to read this post about her if you’d like.

A lot of y’all also know that before she passed away that my beautiful friend told me that she was going to have a talk to with GOD about us our long awaited baby. If you don’t know that story, we had been trying for 10 years and a few months after Toni got to heaven and had that conversation we found out we were expecting our little bear.

So as you can imagine, I think about Toni quite a bit when I look at the sweet little face of our baby boy.

Well the other night while I was snuggled up with our little bear, I was looking at his sweet face and thanking lucky stars and of course Toni peaked her head into my thoughts.  While I was thinking of her I randomly thought of a conversation that we had had about a year or so before she passed.

Where the idea came from:

Toni was one of the sweetest, kindest people I’ve ever met and she was always thinking about others.  She was also super crafty and she loved to be in the kitchen.  She was also super interested in how my blog worked and I have quite a few e-mails tucked away that she had sent me asking about starting a blog and e-mails of us talking about cooking and baking.

One weekend while my best friend Nikki (Toni’s sister) and I were down in Wilmington visiting with Toni, she walked into the living room and told me that she had a fantastic idea and wanted my opinion.

Toni wanted to start a sort of meal delivery service. She didn’t want to start anything huge, just something that she could run out of her kitchen at home.

She said, “You know, I just want to do something like if your grandmother doesn’t get out of the house a lot but loves spaghetti, I can make a pan of it and take it over there. Or if you’re planning a holiday meal and don’t want to make the side items then I can make the mac and cheese, mashed potatoes and green bean casserole and delivery it to you.”

She said she just wanted to kind of do it as a “word of mouth thing” and maybe promote it on Facebook. I thought it sounded like a wonderful idea and we talked a little bit about maybe starting her a blog as well.

Her vision didn’t come to light, soon after that she was getting a bit too sick to be making tons of food for other people although I knew she wanted to.

So while I was thinking about her and that conversation that we had, this thought came to me.

What if I made something for the blog to incorporate Toni’s idea. Except I wasn’t exactly sure of how to do it. So I laid there with our little guy for a while brain storming, I came up with this!

Toni might not be with us anymore to bring her vision of taking food to others to light but WE CAN!

That’s the new feature, I’ve put something together to be used when you want to take a little something special over to a friend, family member or someone in need.

I’m calling the feature, “A Toni Tape and Take Recipe”!

What is “A Toni Tape and Take Recipe”?

“A Toni Tape and Take Recipe” is a new feature on some of the recipes here on BigBearsWife.com

On some of the recipes here on the blog that remind me of meals and treats that Toni might have made to take to friends and family, I’ve added the “A Toni Tape and Take Recipe” feature!

At the bottom of those recipe posts under the recipe you’ll find recipe cards like these: 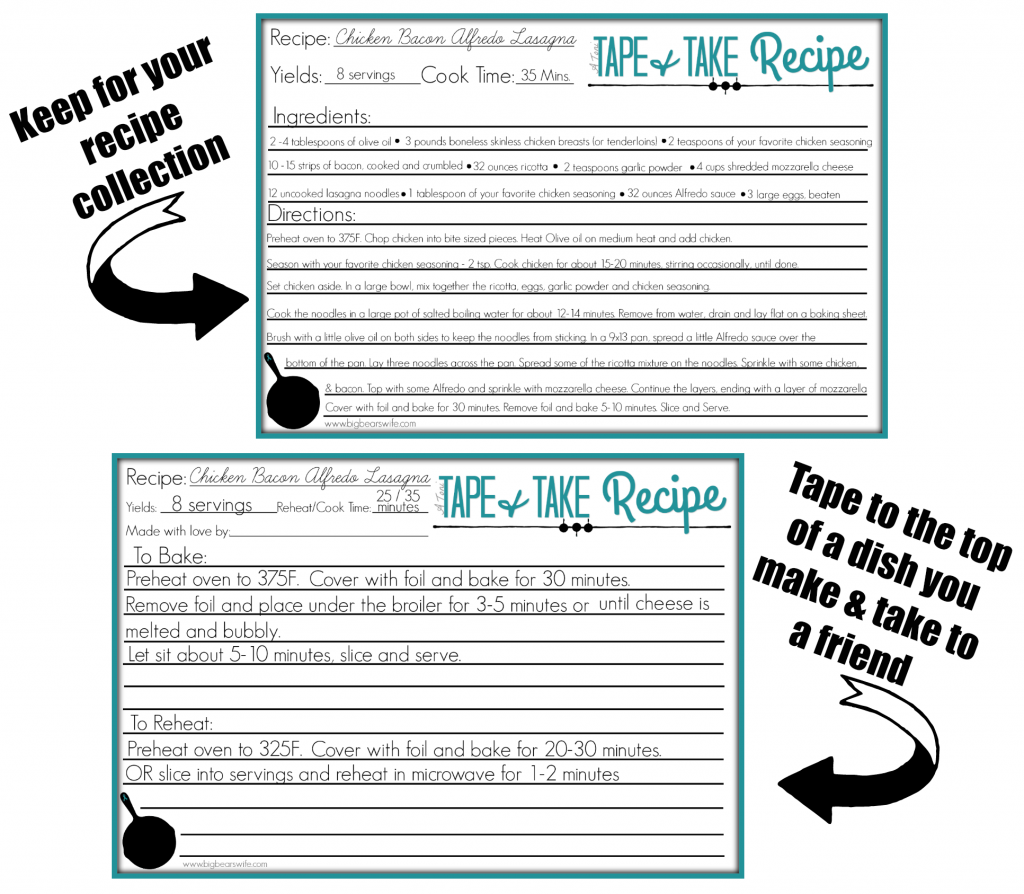 There will be a link to click on and then you can download and print the recipe cards!

The top recipe card is for you to keep for your own recipe collection.

Then once you’ve made the recipe for a friend, family member or person in need, you’ll cut out and tape the other recipe card with the baking or reheating directions to the top of container holding the meal!

You see? It’s a TAPE AND TAKE recipe! You tape the card onto the meal and then take it to someone else! 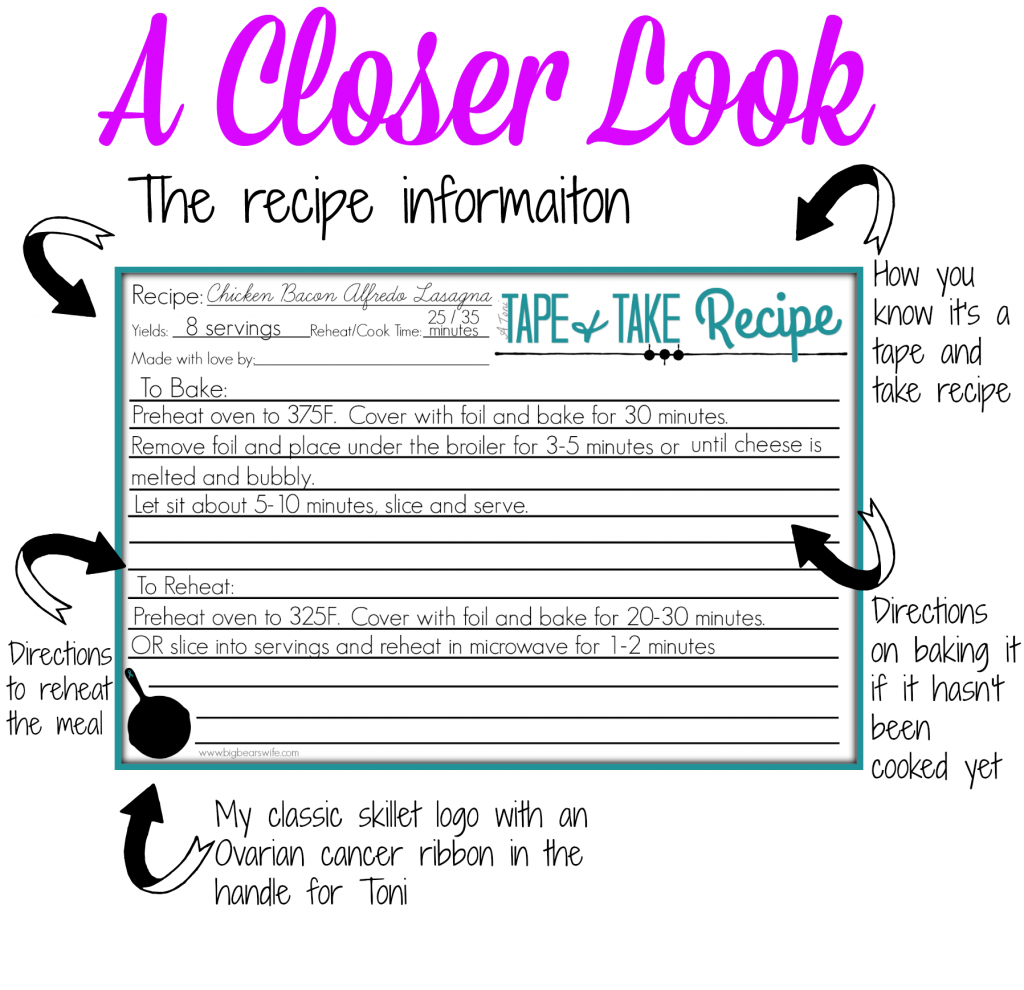 Which Recipes are “Toni Tape and Take Recipes”

So far I’ve set up 4 of the recipes on BigBearsWife.com as Toni Tape and Take Recipes

I plan on adding more soon but those are the ones we’re starting off with.

So let me know what you think!

I know Toni would LOVE it!

I’m going to make some more of Toni’s Recipes for the blog and add them as well.

Which recipes should I add to the collection?

I would love to see these cards in action!