Anne’s Back with more Best Eats from Hawaii!!

So you really want to eat Hawaiian food? Really really really want to? Ok, then toss out your travel brocheure and tourist luau trap and follow me back down to Hole in the Wall Cafe in sunny downtown Honolulu (or you can also go to Ono’s on Kapahulu, which is closer to Waikiki).

My friends and I went to Hole in the Wall today for lunch and each of us had a variation of the Hawaiian plate for $8.75. Nothing says Hawaii like LauLau!

I had the LauLau (let’s define that shall we…it’s a spinach or collard like leaf with Kalua Pork and Monk fish inside, that has been wrapped in a tea leaf and cooked either underground called “Imu” style or steamed in a large pot) and LomiLomi Salmon ( tomatoes, green onions, onions and cured salmon with salt) brown rice, 3 pieces of Pipikaula (cured beef served cold, sort of like Hawaiian Style jerky) and Haupia (it’s a coconut jello like..firmer than jello…dessert) 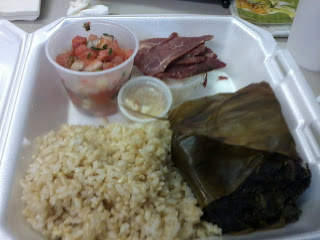 This is the haupia. 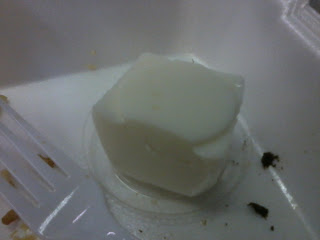 My friend, Sam had the laulau and kalua Pork (cooked shredded pork with a local flavor all it’s own and impossible to duplicate, can be served with cabbage), pipikaula, brown rice and haupia. Maile had the Squid Luau (creamed laulau leaf, coconut milk and fresh squid) lomilomi salmon, white rice, pipikaula, and haupia. 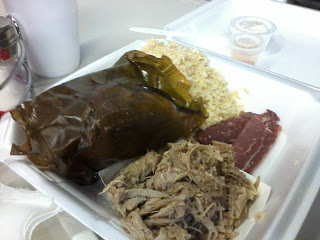 While none of us managed to finish our whole plate we left very happy! Just say pas the chili water!

Until next time, aloha and happy grinding from the 808!