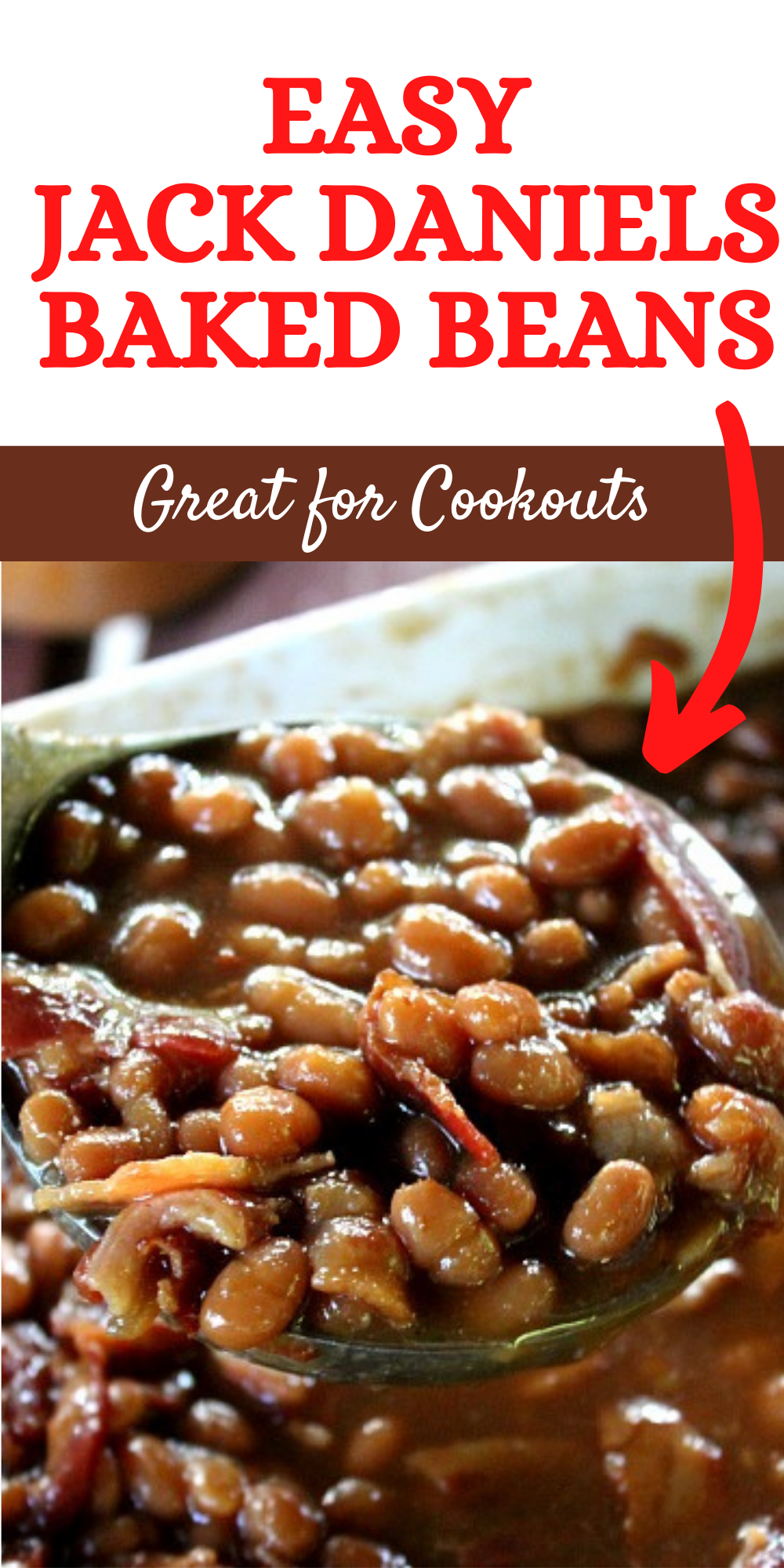 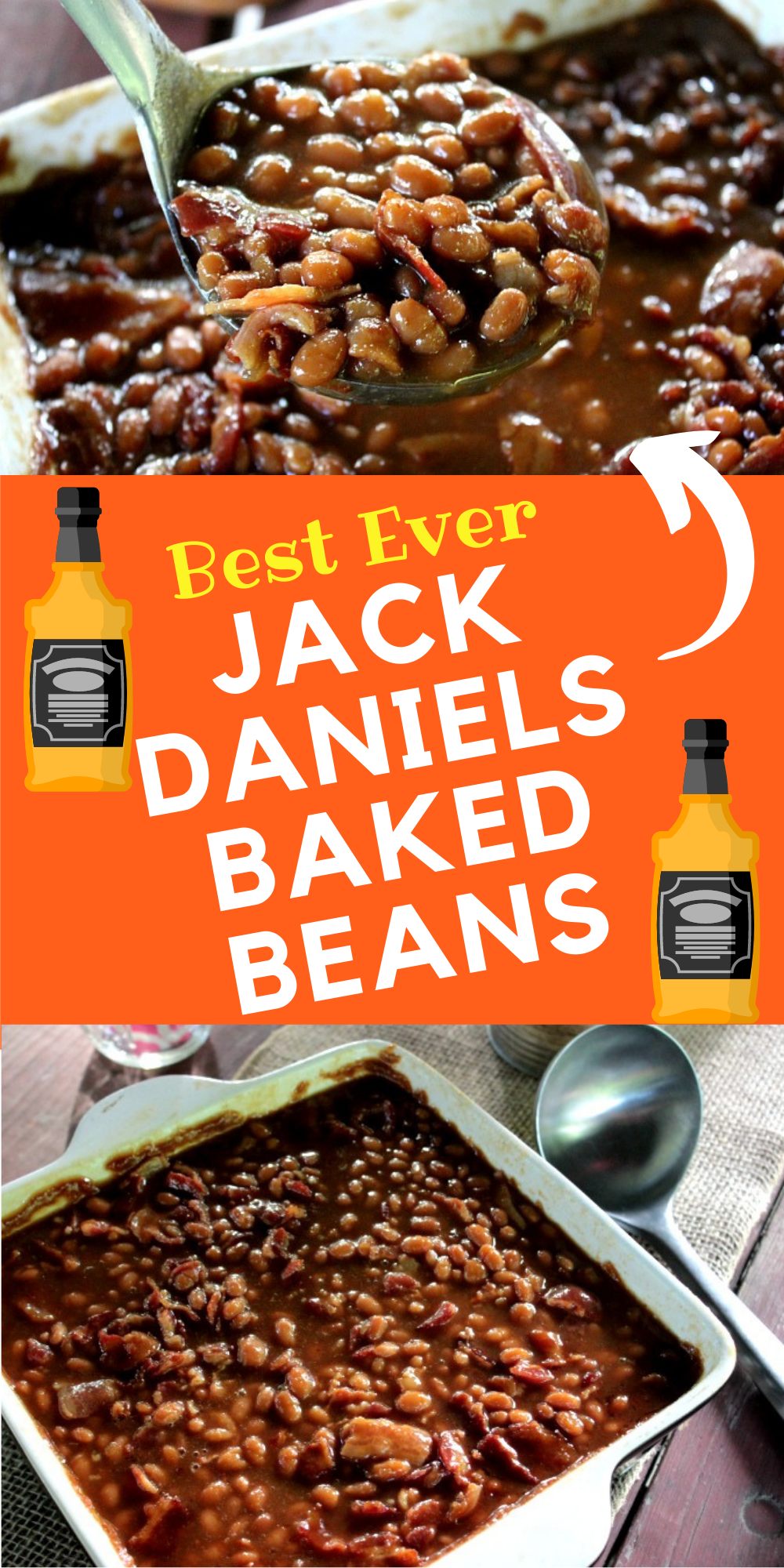 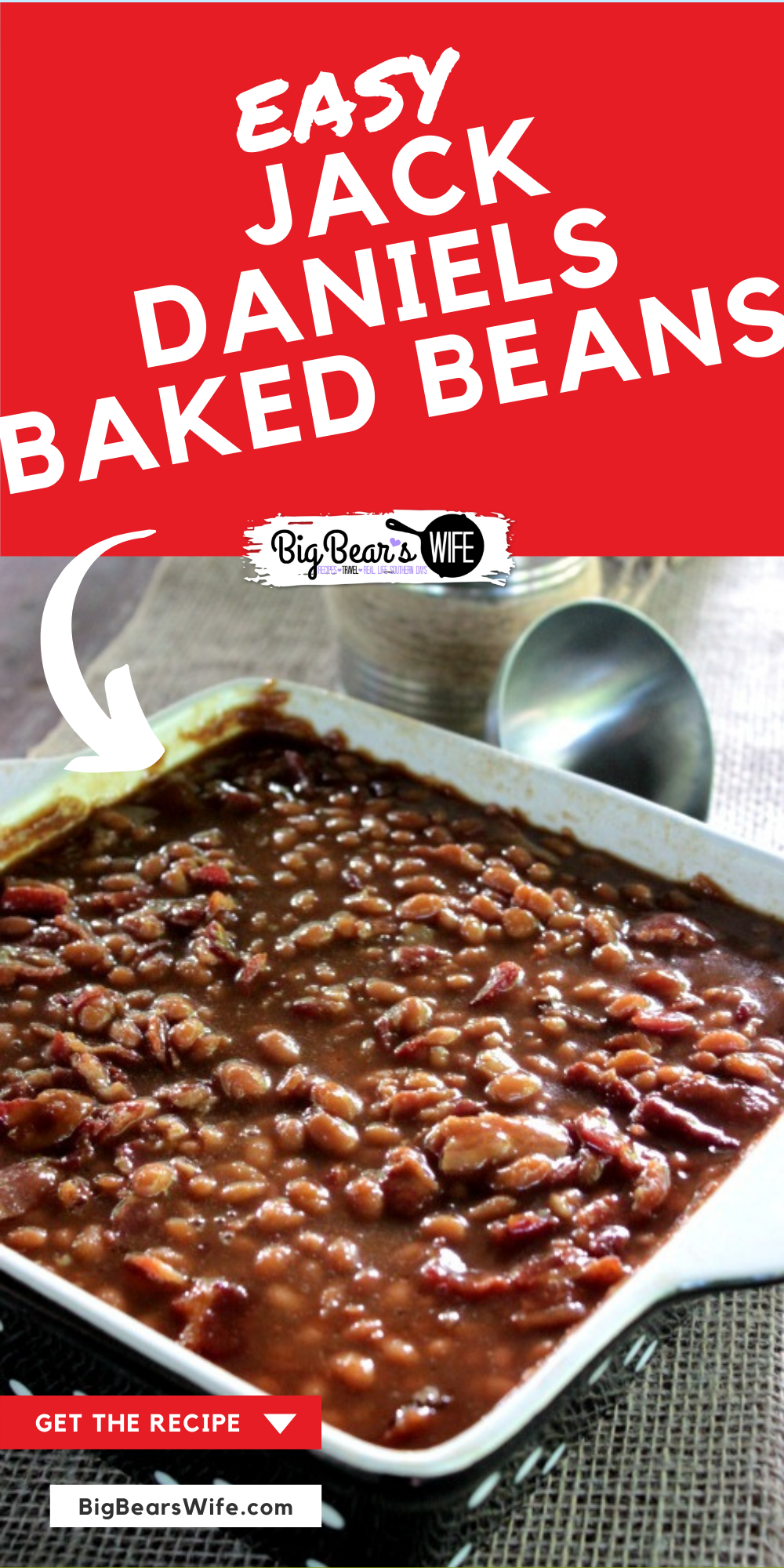 Super easy and tasty Jack Daniels Baked Beans are perfect for cookouts and holidays! Great as a side dish for burgers, hot dogs and anything else you whip up on the grill this summer! 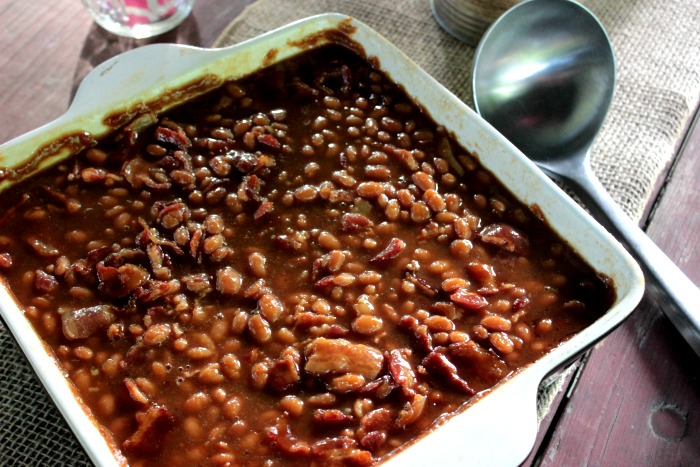 Do y’all know that it took me almost 7 years of marriage to convince my husband to eat baked beans?!

I mean really, why in the world is someone going to fight me over eating baked beans haha. He insisted that he hated them, which I just couldn’t understand because they’re delicious. He had no issues with eating refried beans at the Mexican place but if I tried to put baked beans in the grocery cart he curled his nose up at me.

Then one day, we were just strolling the aisles at the grocery store and the throws a can of baked beans into the cart. “What the heck are you doing? You don’t even like Baked Beans!” — “I know but I have a craving for them so we should get them.” –What tha….yeah that just got you the side eye buddy.

After a moment of side eye staring I just shrugged my shoulders and we went on our way. Some times I wonder about that man of mine. haha

But anywho, so now I finally have BigBear on the “baked beans are awesome” team and now we (thankfully) have baked beans stacked in the pantry to be used as fast side dishes for BBQ’s and cookouts.

So what would be my choice of baked beans? 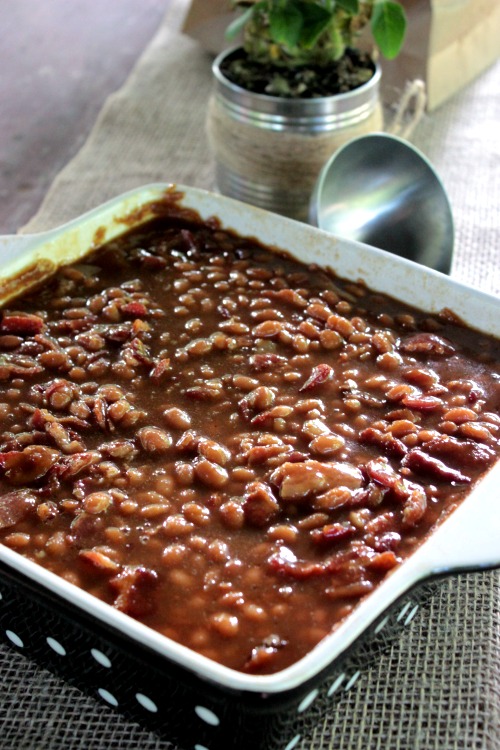 I admit that sometimes I’m reaching for the cheapest can I can find. However, if I’m feeling “fancy” I normally just go for the BUSH’S baked beans but I’ve been known to throw some other brands in the cart. I don’t really find too much of a different in the BUSH’S original baked beans and other brands but I will tell you that I love a good can of their Maple Cured Bacon baked beans and their Country Style Baked beans.

It must be all of the extra bacon and brown sugar that pulls me in.

These are the perfect side dish and you’ve got to have them for your next BBQ! 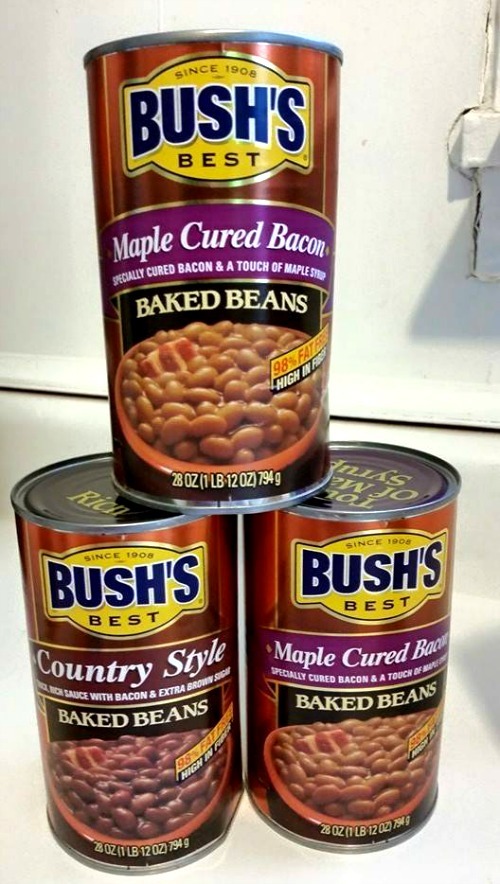 Baked beans with brown sugar, tons of bacon and Tennessee whiskey….I mean really, can’t that just my main meal, does it really need to be a side dish? I think I’d rather just have a huge bowl of these as my dinner. Shhhh I won’t tell if you won’t!

Why did I choose to make Jack Daniels Baked Beans? Well a few years ago I had a reader message me after we had talked back and forth in the comment section of one of my Facebook posts.

She had a killer baked bean recipe and while she wouldn’t share her exact recipe with me she did offer to share the ingredients. 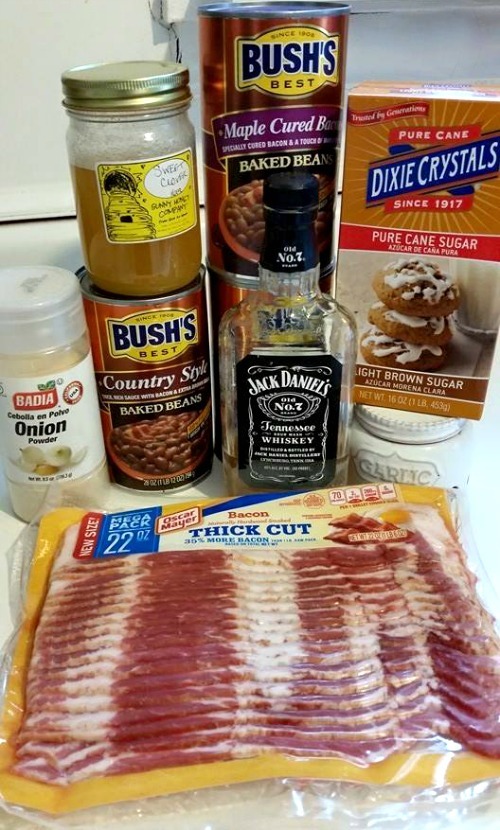 It was then my job to figure it out. Well these Easy Jack Daniels Baked Beans are the result!

What did I use in these Easy Jack Daniels Baked Beans?

(and NO, none of these companies know I’m writing about them but I wanted to let you know why I chose the brands that I did for these baked beans)

BUSH’S Baked Beans — So why did I decide to doctor up the tasty baked beans? Well, because I can’t leave well enough alone. I’ve got to add a pinch of this and a dash of that to everything. Don’t judge me! haha. I loved using these as my base flavors!

Sweet Clover Honey — You can totally use regular honey but if you can get your hands on some sweet clover honey, I highly suggest you use it. I got this honey from Sunny Honey Company. I always went along with the idea that Honey was honey until I had a honey tasting when I went to Asheville, NC the other year and I discovered that not all honey is created equal! haha. I’m officially in love with Sweet Clover honey and Blackberry Honey!

Dixie Crystals — it’s just normal for me to grab a box of Dixie Crystals sugar. I’ve always loved the name haha, after all I do live in Dixie! 😉 So, Dixie Crystals or store brand sugar are both normally found in my cart. If I’m just baking cakes I’m normally using store brands, if I’m making icings, baked beans or anything else that isn’t going to just be baked up in a batter I’m using Dixie Crystals, plus the people behind Dixie Crystals are super sweet (pun intended haha).

Oscar Mayer — Also a brand that I’m drawn too because it’s what we bought when I was growing up. But I also grabbed this pack of bacon because it was the best deal for the amount and these strips of bacon were nice thick cut strips! No one wants thin, flimsy bacon in these baked beans!

The garlic is just regular heads of garlic and the onion powder is a brand called BADIA. I like this brand because I can get a huge bottle and it doesn’t normal cost me very much.  I find the BADIA spices in the “Mexican” section of my local grocery store and their spices are fantastic but way cheaper than the ones in the baking/spice section. You can use a real onion for this if you want too but since Big Bear is allergic to onions, I have to use onion powder in our recipes! Yep, he can’t eat onions but he can handle onion powder. 🙂 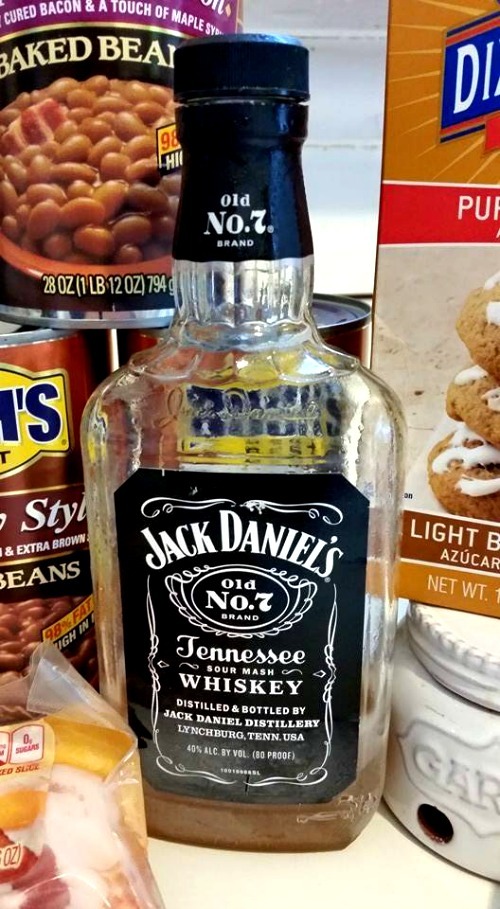 Oooo and then there is the Tennessee whiskey…..Jack Daniels of course! Sorry, y’all I’m awful and I didn’t go out and buy a new bottle for the photo session for these beans. Please forgive me. I pretty much finished off this bottle after taking these photos though, so I’ve got to make a stop to grab some more soon! 🙂 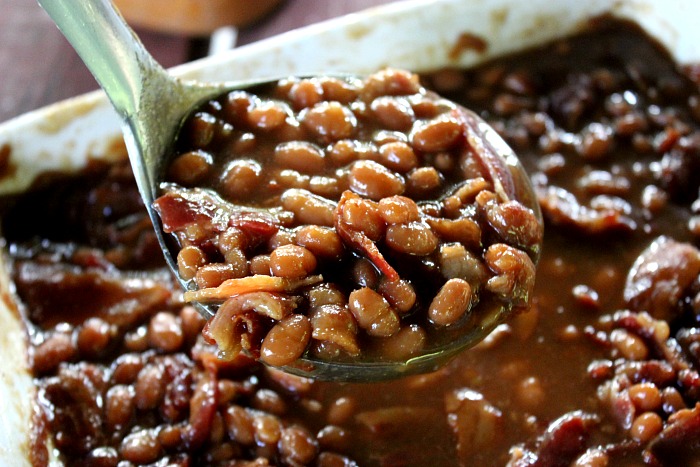 Annnd after going back and reading all of that stuff that I just wrote I think I’ve decided that it’s time for me to shut my trap for now.

Yep, I think I’m just excited about following my heart because these recipes just make me want to talk and talk and talk…… 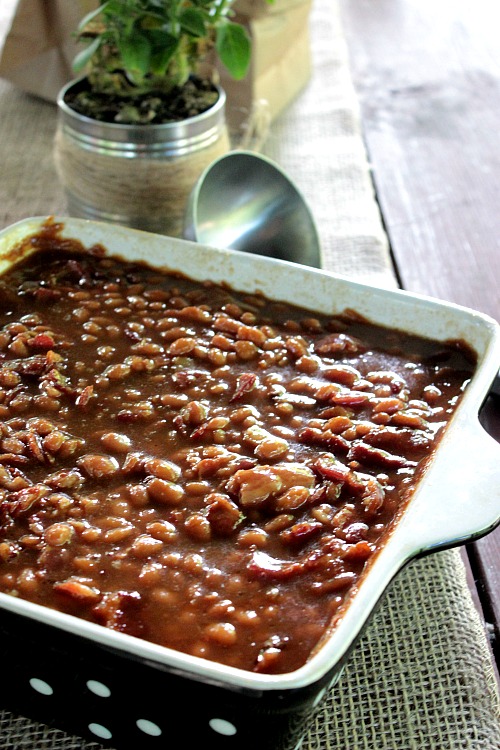 So that’s the 2nd recipe for this week’s “BBQ/Summer Picnic” theme! Saturday I’m finishing up with a sweet and simple dessert so come on back to grab one of those a little later! <3

Did you miss the first recipe of this week’s “BBQ/Summer Picnic” theme? You can grab that here.

Cut the bacon into 1 inch pieces and cook until crispy.

Place cooked bacon on a paper towel to drain and remove all of the bacon grease EXCEPT about 2 tablespoons.

Add the garlic and cook for about 1 minute or until fragrant.

Remove garlic and set aside.

In a large bowl, mix together the beans, onion powder, honey and brown sugar.

Mix in the Jack Daniels.

Mix in the garlic and bacon. (I saved about 1/4 cup of bacon to out on the top before baking)

Sprinkle the 1/4 cup of bacon on top.