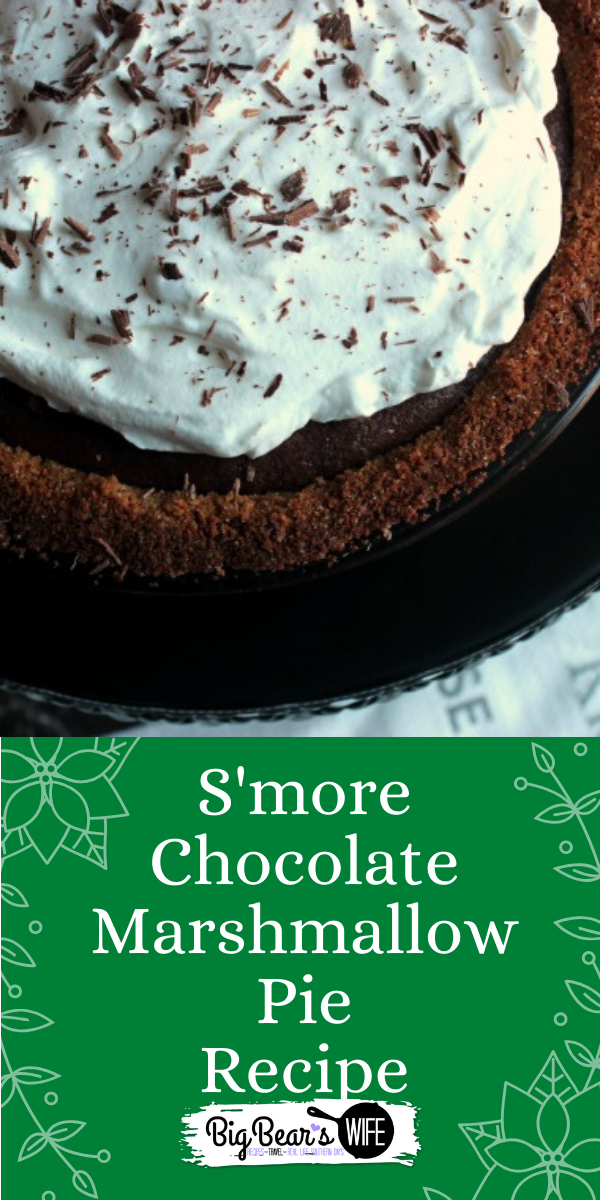 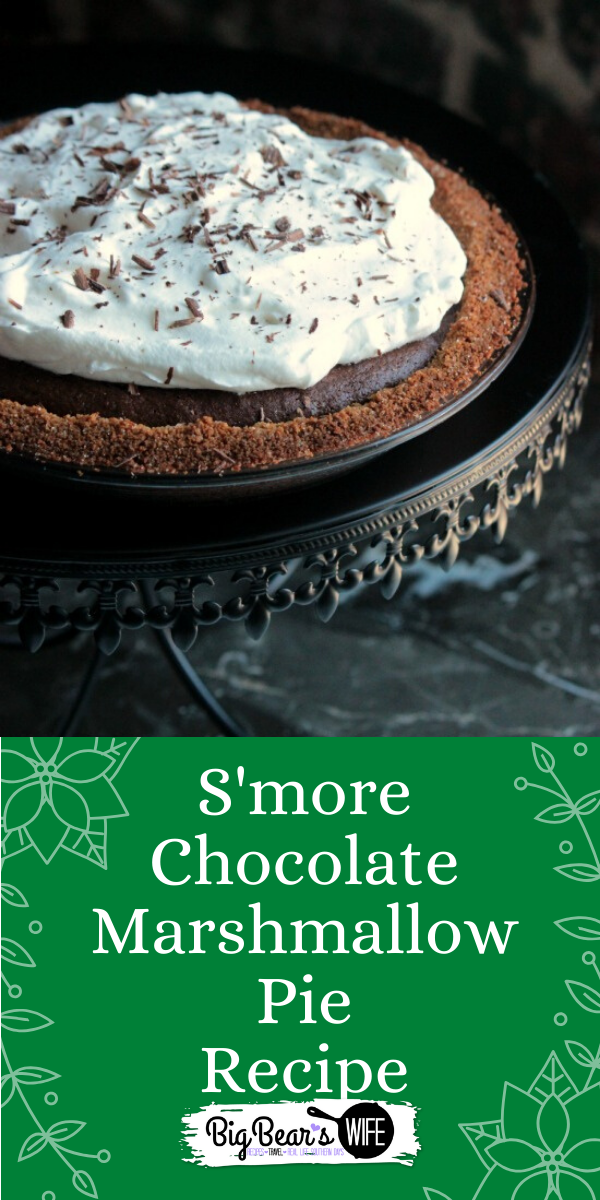 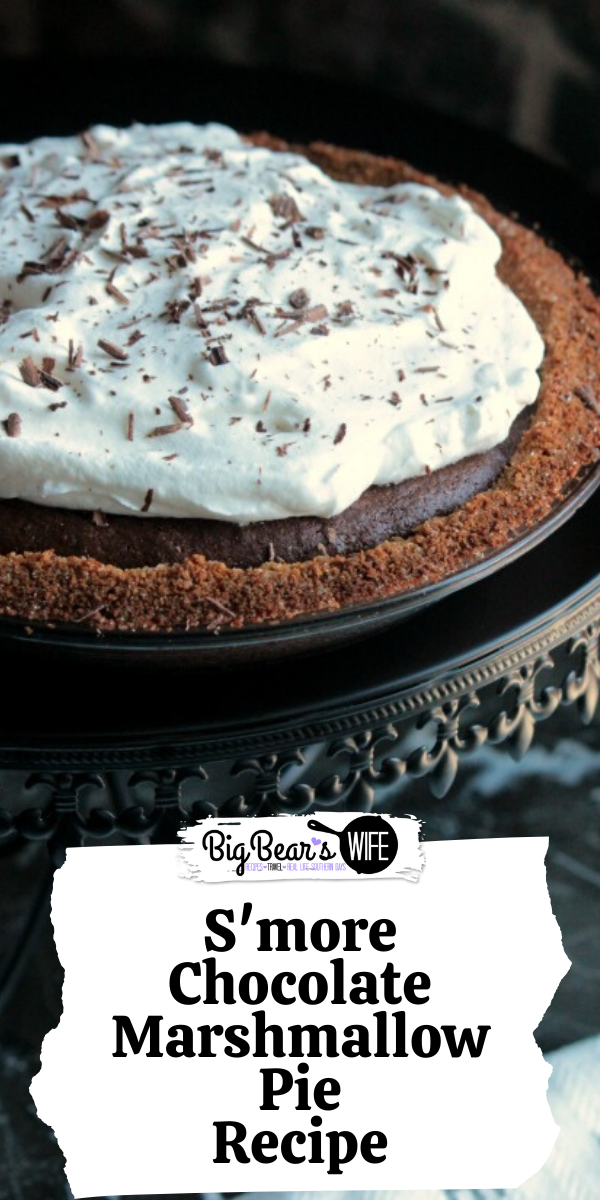 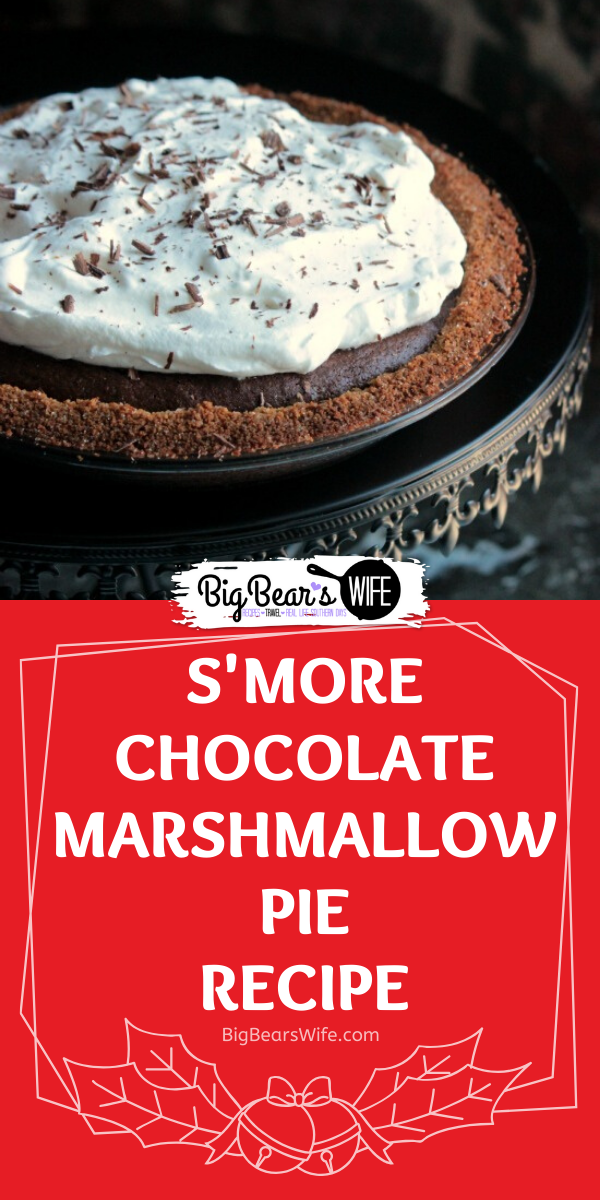 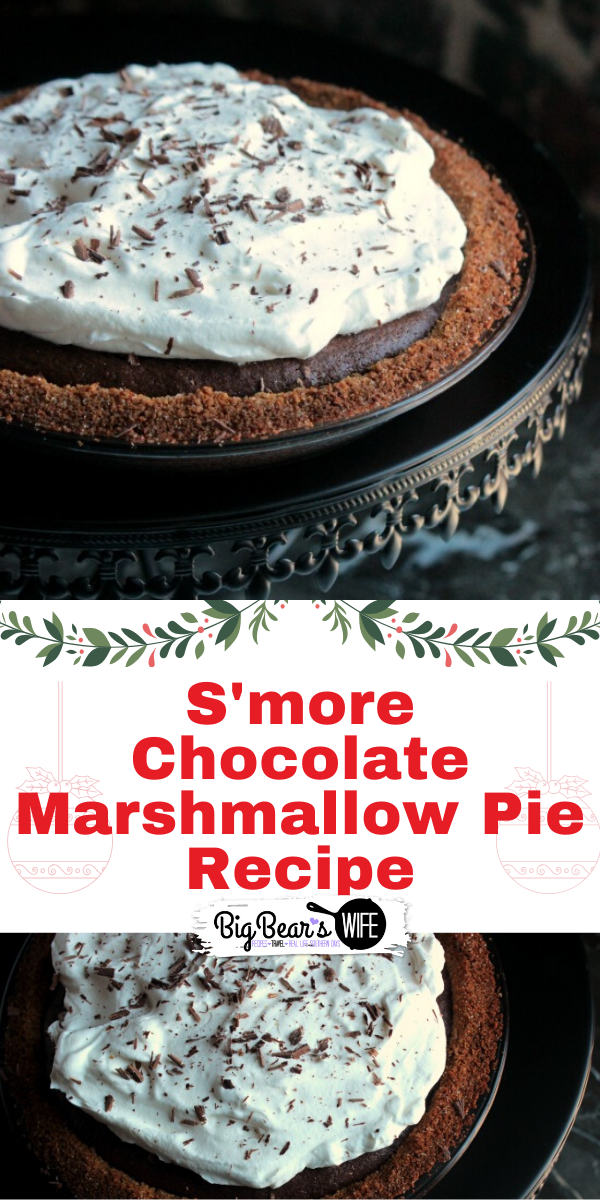 Love Chocolate and S’mores? You’ve got to make this S’more Chocolate Marshmallow Pie! It will wow all of your friends and family! 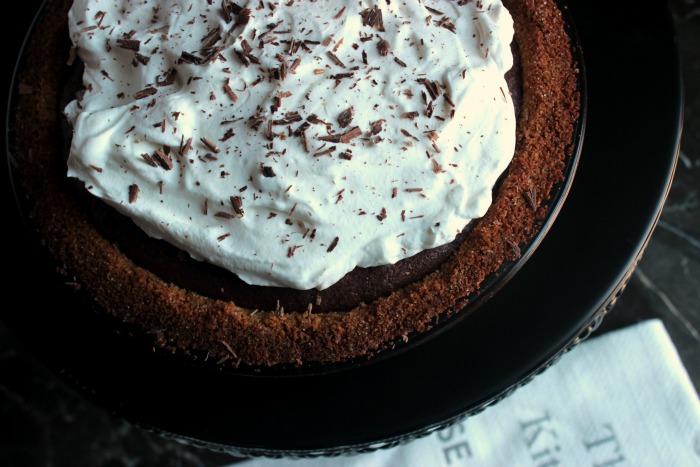 Well, this isn’t really a red, white and green Christmas dessert with an over load of peppermint but I just had to share it with you. I made this a few weeks ago and like the Peppermint Crockpot Hot Chocolate that I made back in November, it’s just taken me a while to get it ready to go on the site.

Literally the two recipes that I’ve loved the most over the past two months took me forever to put together and share with you. 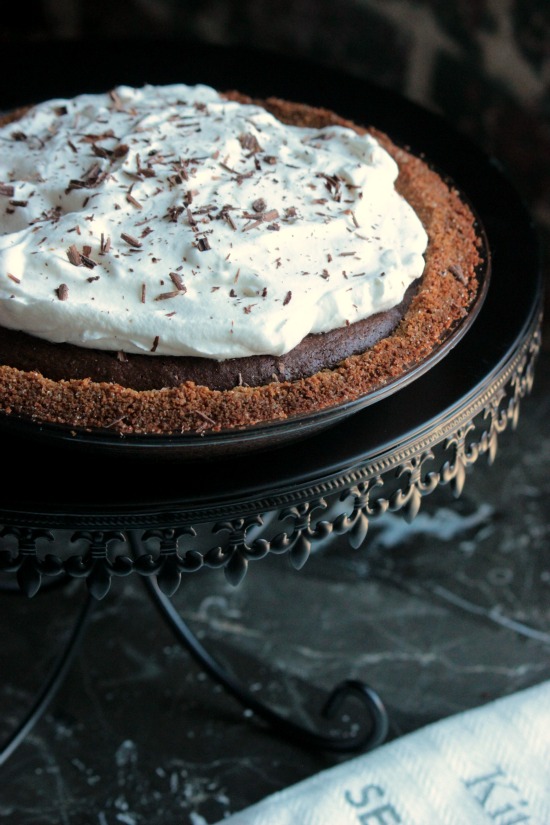 This photo right here might be one of my favorite food photos that I’ve taken. I mean it may not be the best on the world but I’m so in love with it! I’m calling this cake stand my “black fleur-de-lis cake stand” and while it’s beautiful on it’s own, it’s even more stunning with the S’more Chocolate Marshmallow Pie on it against the brick wall.

Have I told you how much I love the brick walls in our apartment? haha Yeah, I know I have. #SorryNotSorry 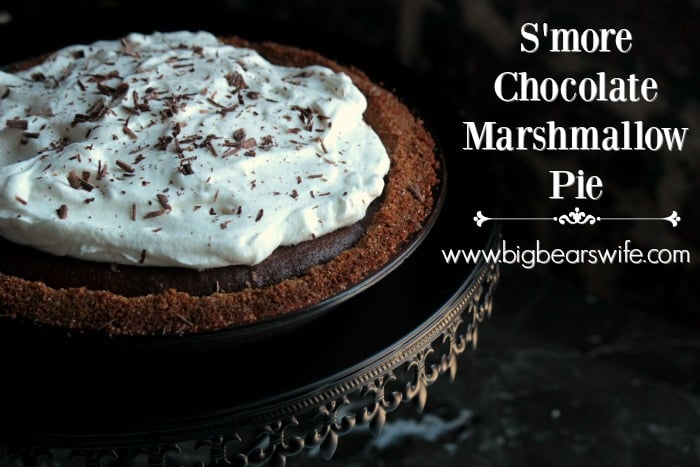 So, why S’more Chocolate Marshmallow Pie in the middle of December? Well, because it’s pie and it’s chocolate and marshmallow. Do I really need a reason other than that?

I suppose that most people think about S’mores in the summer, you know with the campfire, graham crackers, roasted marshmallows and melted chocolate. 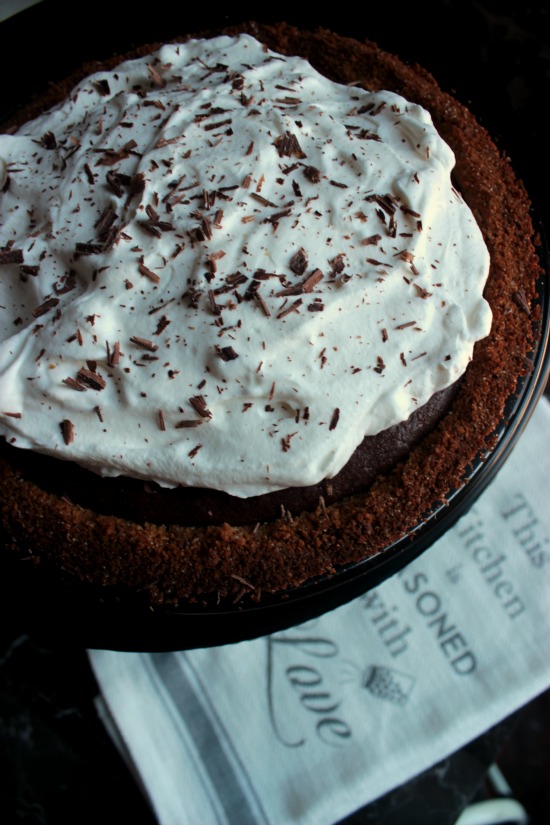 I have really awesome memories of making s’mores around the camp fire when I was in girl scouts and when I use to go off to church camp.

I would literally wait all day and evening for them to tell everyone to head to the fire pits. We’d go search for roasting sticks, they’d pass around the giant bag of fluffy marshmallows and stack plates full of chocolate bars and graham crackers while we huddled around the burning pile of wood.

We’d sit around the fire, sticking the marshmallows into the bright orange flames until they were bubbling and turning black before we would jerk them out.

Most of the time the marshmallows still had flames jumping off of them and we’d blow them off before smashing them in between the chocolate and graham crackers. We would laugh while we told ghost stories with our roasted marshmallows in hand until our tummies were full and our faces and fingers were covered in sticky marshmallow. 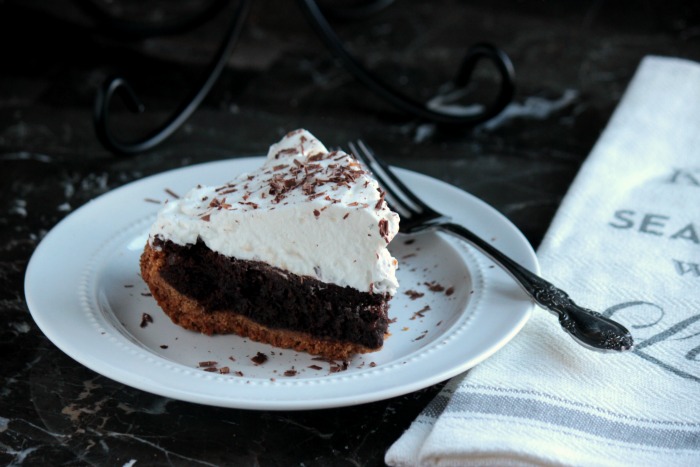 Well this pie has got all that without the burst of flames from the campfire. haha 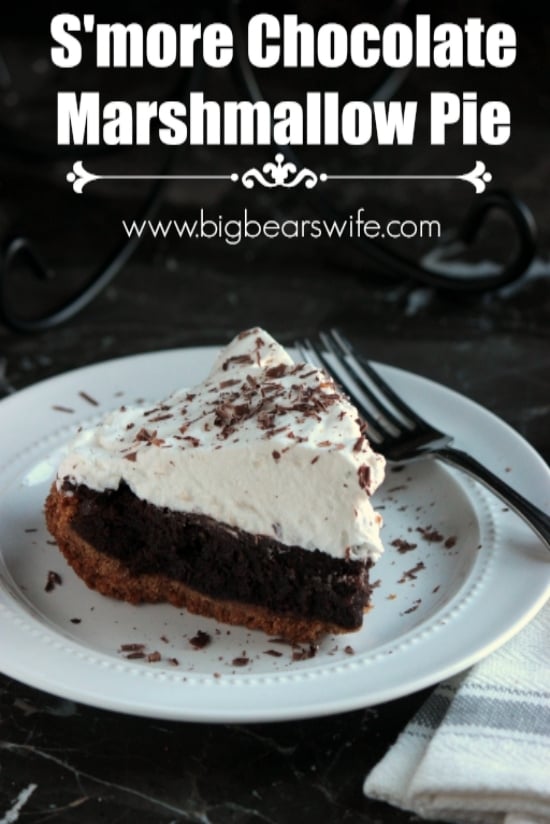 Just like the Chocolate Pie, this S’more Chocolate Marshmallow Pie is really good the day it’s made but it’s so much better if you let it sit in the fridge for about 24 hours.

I know it’s going to be rough. I know that you’re going to want to dig right into this pie as soon as you get the whipped topping piled on but if you can stand to wait, do it. 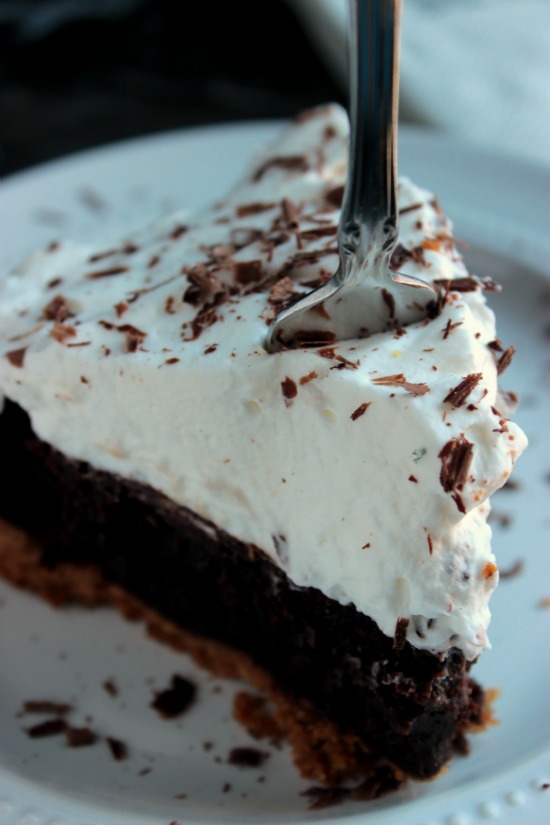 I promise that it’s worth it! Trust me on this one. 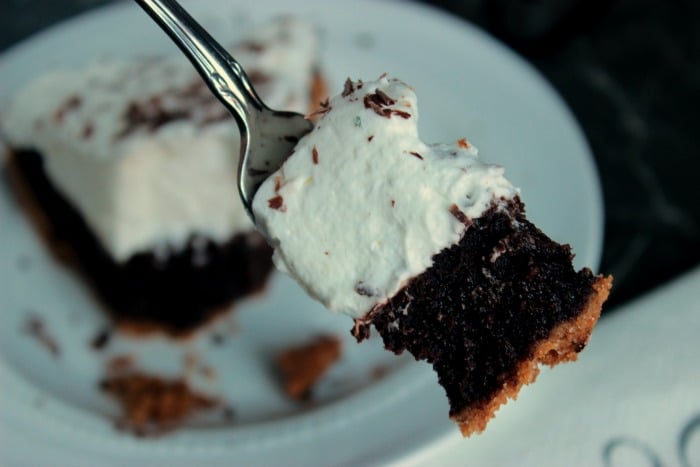 So, so this is totally random but I still have some Christmas photos to show you from last weekends downtown adventures!

Well, maybe it’s not totally random but it doesn’t have much to do with S’more Chocolate Marshmallow Pie. I may just do a post on Christmas day with all of the Christmas photos but here are a few that I thought I’d toss into this post.

This is one of the mansions on Millionaires Row downtown and I call it “The New Orleans House”. It doesn’t really have anything to do with New Orleans that I know of but it just looks like something that you’d see down in New Orleans on a plantation, in my opinion. 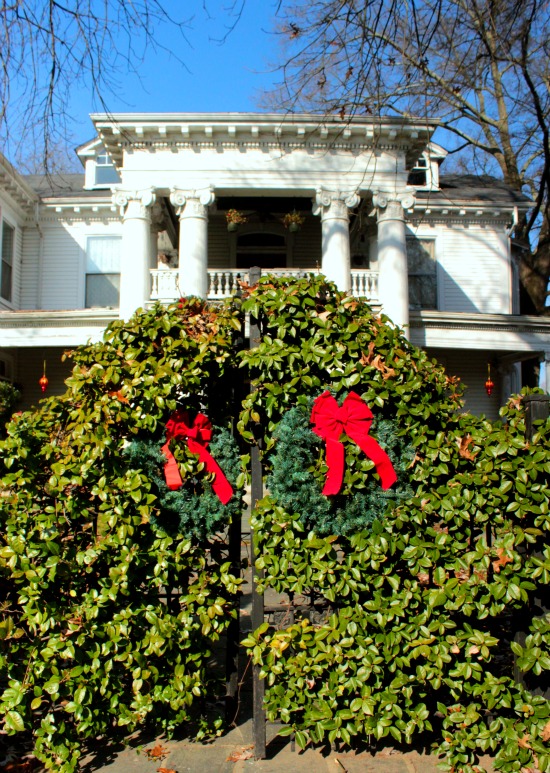 This house was built in 1860 and while at one point it was just 1 huge house for 1 huge family, I’ve heard that it now serves as a main house for one family with two apartments for other people. It would be amazing to see the inside as one huge house! 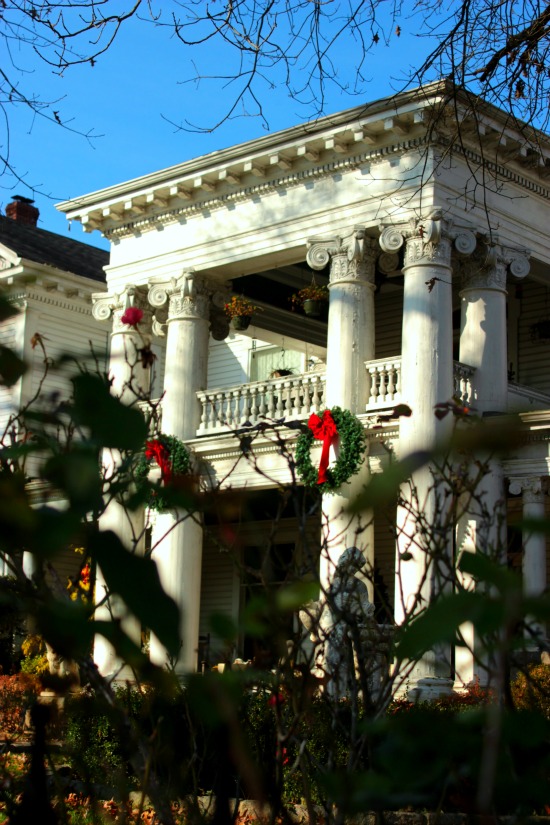 I’ve actually photographed the Bell-Boatwright House house a couple of times. Most of the photos that I have of it are in the spring and summer when the pink roses are climbing up the iron gates but I have to admit that I really loved the Christmas wreaths on the house.
Also, I know that you can’t see them in the photos because of the shadows but there are two huge Christmas trees on the front porch by the front door as well.
So, that was kinda random.
I’m ok with that though because I’m a pretty random person anyways haha.

I know, I know.
But I had to share them. I knew that you’d love them! Who doesn’t love a beautiful, 155 year old southern mansion! haha <3

Break the graham crackers into pieces and add them to a food processor. Add in the sugar and pulse until they turn into crumbs. Add the melted butter and blend until everything is combined.

Press the graham cracker mixture into the bottom and up the sides of a pie dish. I used a 9-inch pie dish.

Bake at 350 F for 9-10 minutes or until the crust is slightly browned. *Don't burn it*Once it's cooked, put it on a cooling rack and let it cool completely.

Pour the chocolate into a bowl and let it cool for 5-10 minutes.

Once the chocolate has cooled, whisk in the sugar, eggs, chocolate extract (or vanilla) and salt. Whisk until smooth and then add in the flour, also whisking until smooth.

Pour the chocolate filling into the cooled graham cracker crust. Bake in a preheated oven at 350F for 30 minutes. Move the pie to a cooling rack and let it cool completely. (This may take an hour or two)

Add the cold heavy cream, marshmallow fluff cream and sugar to a bowl and whisk with an electric mixer for about 3-4 minutes or until the mixture is thick and fluffy.

Spoon the homemade whipped topping onto the center of the pie, use the back of a spoon to spread it out over the top of the pie.

Store pie in the fridge.

*It's good the first day, it's 1000x better the second day after sitting in the fridge for 24 hours* 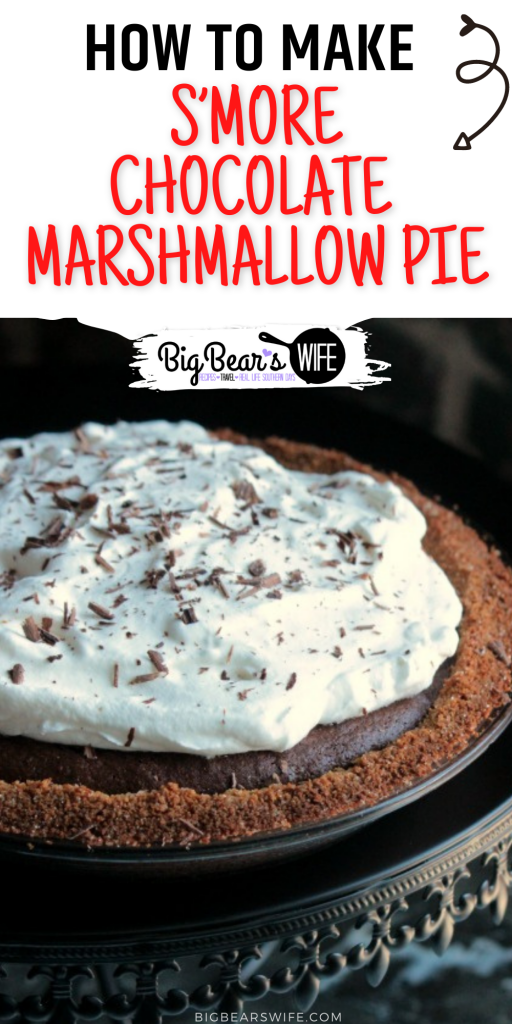