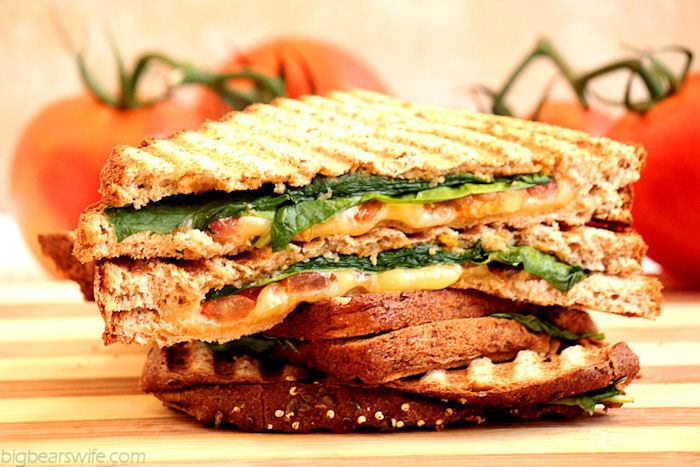 It’s day 11 in Our October Challenge. So far I’ve done so good, except for one slip up. Booooo

Ok, sorry I got off track… back to the slip up. I’m not even sure if it’s a big slip up, I’m sure my brain is just over reacting because I wanted to really kick butt in this challenge. haha.

But the other night after a PartyLite party I finally got home around 9:15pm, so tired and starving. I opted for my normal peanut butter and jelly (with my harvest bread, natural peanut butter and natural jelly) and THEN while standing in the kitchen, talking to BigBear I reached over and grabbed a handful of yogurt covered pretzels and started to chomp. About 3 pretzels in I was like NOOOOOOOOOOOOOOOOOOOOO. You would have thought that I just sunk the Titanic on purpose. I was not a happy camper. 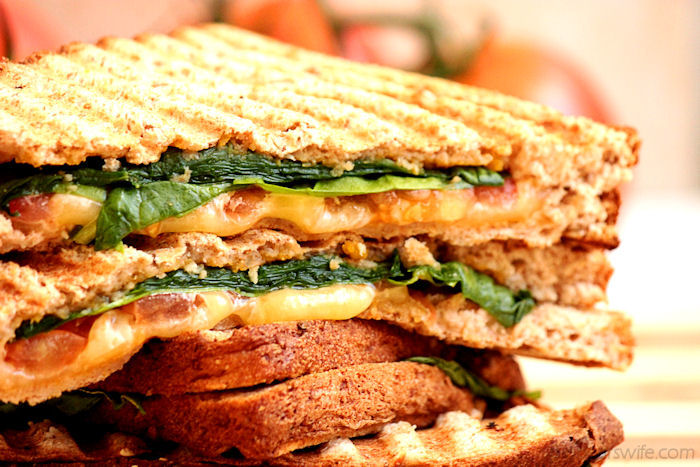 But you say, you just had bread and peanut butter and jelly, what’s the big deal. ……… to that I say, I don’t know. In my mind…. pretzelscome in a bag, chips come in a bag, chips made in factory, chemicals in factory…nooooooo that’s not what I’m suppose to eat! (Yes, even though my Bread, Peanut Butter and Jelly, although natural and with like 5 ingredients is like the same thing)

I know, I think I was just tired and starving and having a mini mental break down BUT I’ve bounced back and I’m ok now. haha. Oh of all the things to get upset over. 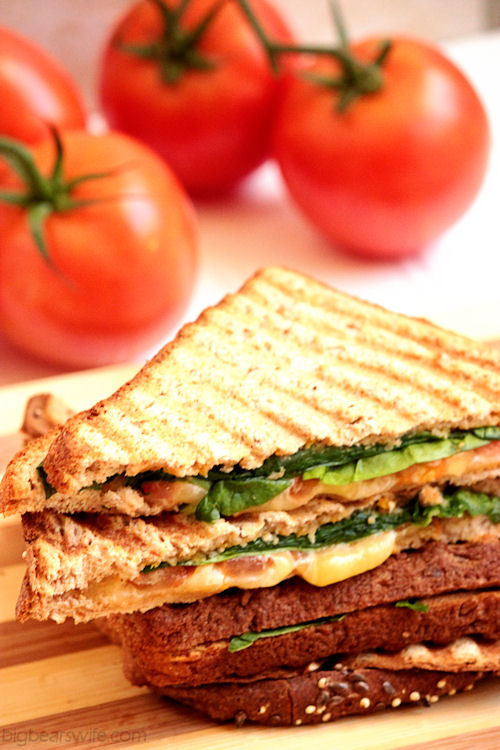 Let’s get onto the real reason you’re here. This Panini is why you’re here, right? It should be.

It’s quite frankly amazing and I don’t I really say that about “sandwiches” unless they really are amazing!

As with a lot of foods/recipes during this Challenge, this panini came about from a conversation with Anne. (Yes, she is my go to for good food and I’ve noticed that I have talked about her a lot in the past few posts haha) 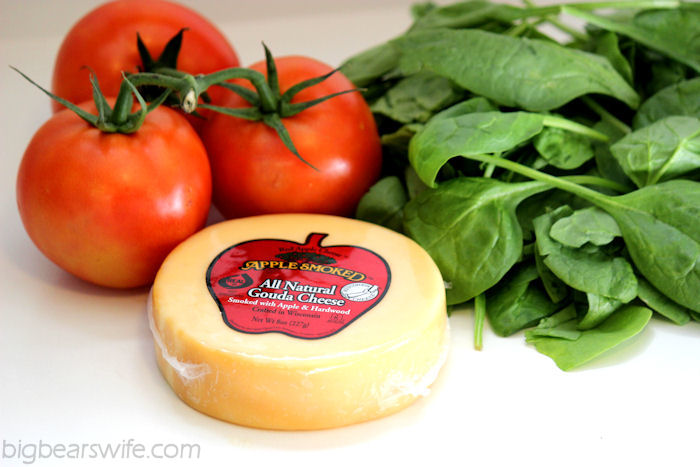 We were talking about food (because that’s what foodie friends do) and I was telling her how I wanted to make some kind of dish with apples and butternut squash. I had wanted to do this before our challenge actually. Back a few weeks ago I stood in the grocery store trying to convince BigBear that apples and butternut squash would be so good together, but he didn’t buy it. I’m not sure that I did either. haha My creative brain was at work though.

So as we’re talking about the subject of apples and butternut squash it moves along with us bouncing ideas off of each other and ends with this Sandwich… um… I mean this Panini…whatever you want to call it. 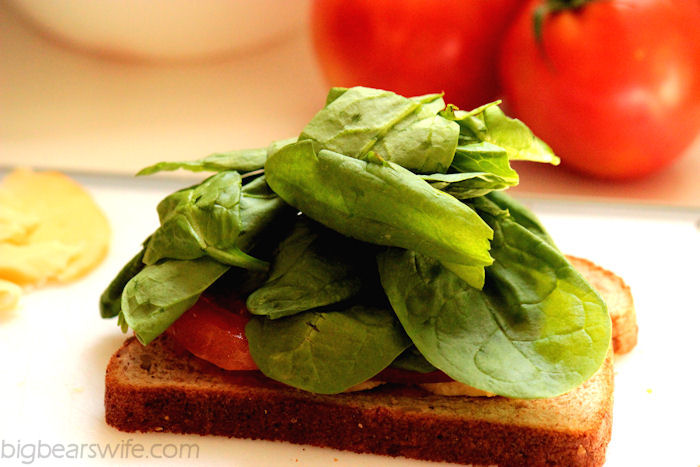 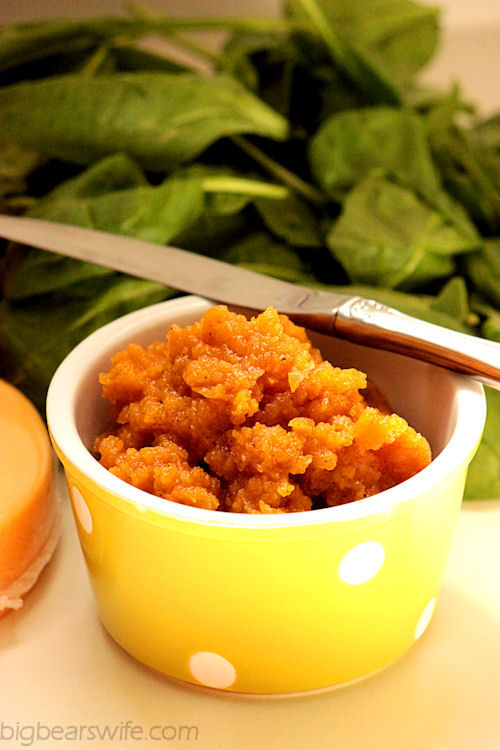 Mmmm, it’s pretty much like Fall in that cup up there. An amber fall spread, if you were to spread fall on some bread that is….. 😉

When I made these sandwiches, I actually roasted the apples and butternut squash and made the spread the night before, put it in an air tight container and then popped it into the fridge. That way when dinner time rolled around the next day all I had to do was assemble these and put them on the panini press. 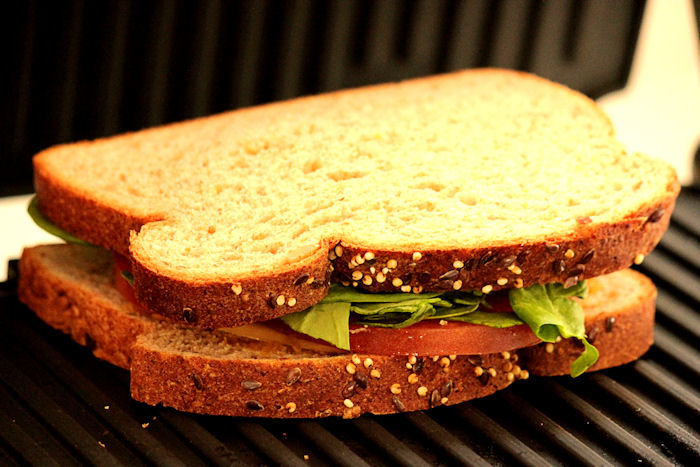 They are really easy to make!

You’ll start by roasted the apples and butternut squash, (I’ve got my full list of direction below), after they’re roasted put those into a food processor (or blender) and turn them into a spread!

Once you have the spread it’s time to assemble the sandwiches!

Spread a thin layer of the Apple Butternut Squash Spread onto the bread. Start to build your panini! Place thinly sliced pieces of the apple smoked gouda cheese on top of the spread, top the cheese with tomato slices and then pile on the fresh spinach!  Top that with another slice of bread that has the apple butternut squash spread on it and place the sandwich onto a Panini press that has been preheated. 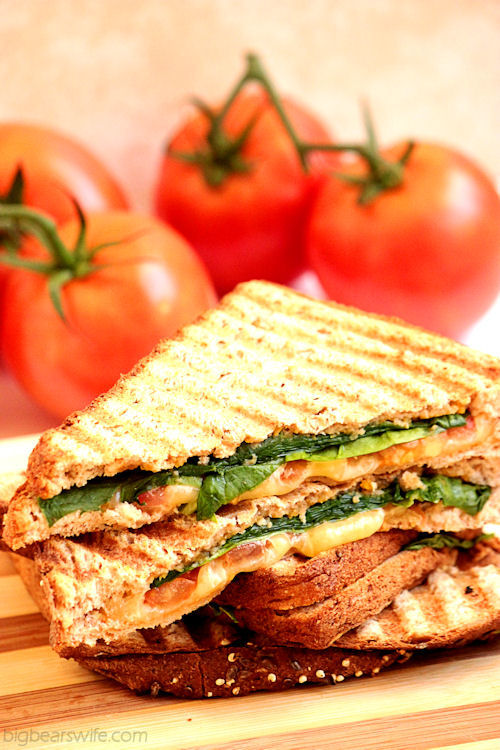 Press down and wait for maybe 2 minutes, just long enough for the cheese to melt and for the bread to toast just a bit! Remove from Panini Press and (as Anne would say) Nom Vigorously! In other words….. you’re gonna like it!
.

For the Apple Butternut Squash Spread


Pre heat the oven to 425F.  On one baking tray lay out the cubes of butternut squash. Toss in olive oil and sprinkle with sea salt. (I didn’t put a measurement for the salt, add just a sprinkle or how ever much you prefer) Spread out into a single layer.

On a second baking sheet, toss the apple cubes with the honey, brown sugar and cinnamon. Spread out into a single layer.

Roast in the oven for about 25 minutes or until fork tender. Remove from oven and let cool.

Toss apples and butternut squash into a food processor with 2 tablespoons of water. Puree until smooth. If you want the spread to be thinner, add more water. Keep in an air-tight container.

Spread a thin layer of the Apple Butternut Squash Spread onto the first slice of bread.

Start to build your panini, place thinly sliced pieces of the apple smoked gouda cheese on top of the spread, top the cheese with tomato slices and then pile on the fresh spinach!

Top that with another slice of bread that has the apple butternut squash spread on it and place it the sandwich onto a Panini press that has been preheated. (Plain Bread Sides on the Outside!!)

Press down and wait for 2 minutes, just long enough for the cheese to melt and for the bread to toast just a bit! Remove from Panini Press