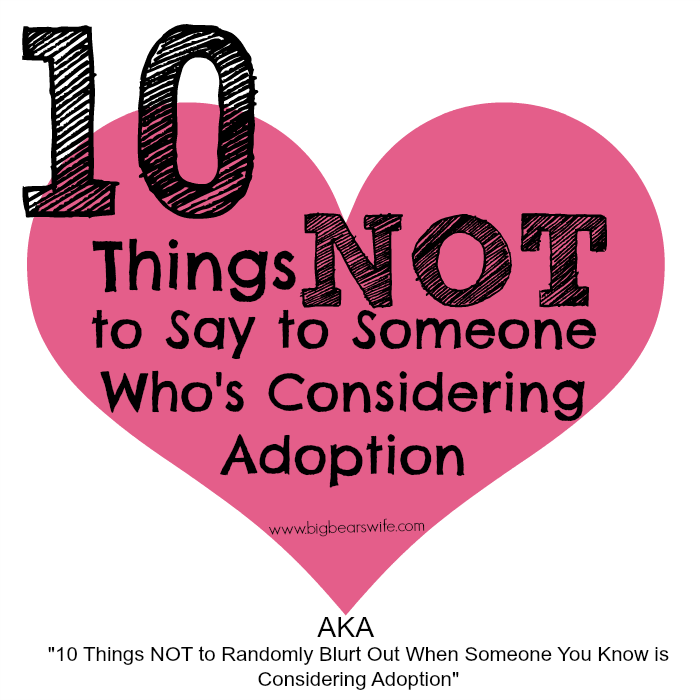 We’re literally just standing at the door and wondering if we’re making the right decisions. We’ve talked about adoption many times in the past but we’re actually getting to the point where it may (or may not) become a reality. Nothing’s happening right this second but we’re checking our options and trying to get as much information as possible. We’re closer than we’ve ever been before but we’re still scared. Actually taking the steps to get closer to adopting is terrifying and at the same time exciting.

But just as we’ve heard the statement “when are you going to have babies?!” throughout our entire marriage, I’m starting to learn that mentioning adoption to anyone can bring on 1,000 new and weird questions!

Adoption can be a scary word for all parties evolved. Sometimes it makes people nervous and sometimes people just don’t know what to say when someone they know is talking about adoption.

Let’s me just say that we are NOT thinking about adopting because we want “kid the easy way”. Adoption is far from easy. It just may be one of our only options if we want to be parents. 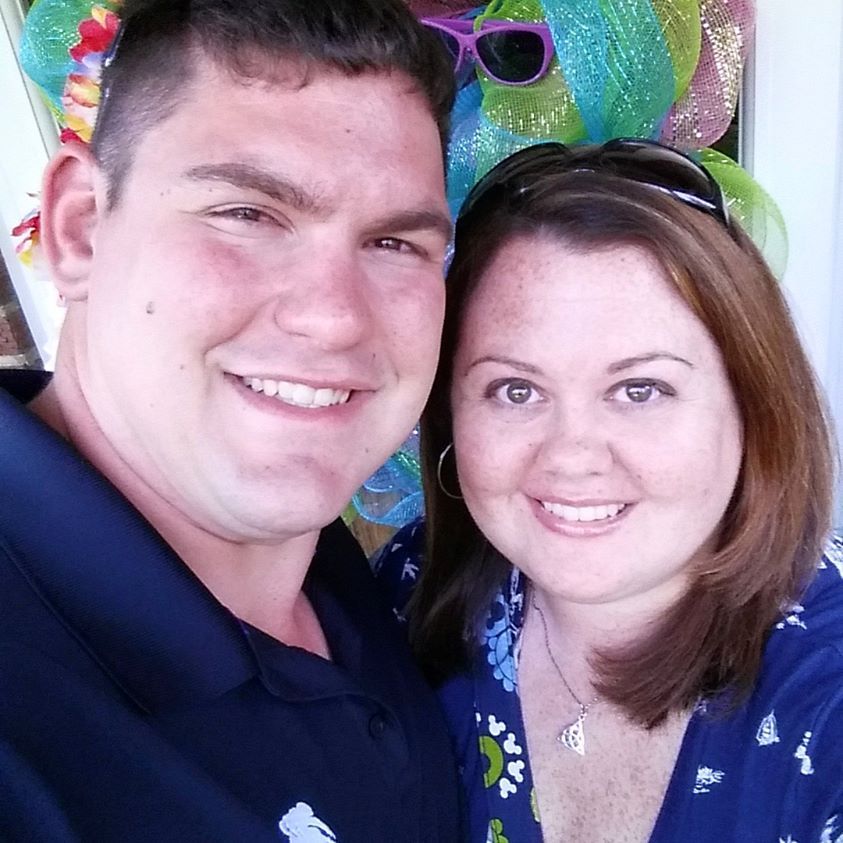 Well, here are 10 Things NOT to Say to Someone Who’s Considering Adoption. And YES, I’ve heard them ALL and we’ve only started our journey.

Also let me say that I’m NOT speaking for everyone that’s decided on Adoption, obviously. I also don’t really mean that your BFF can’t ask you these things if you’re on that level of wanting to open up. These are just random questions that I’ve been asked by people since we let people know we were considering adoption. I’m sure no one was trying to be mean but some times I’m caught off guard by the personal questions people are willing to throw at someone before maybe taking a moment to think about it first.

I doubt there is a coupon in the local paper for adopting but I’ve heard stories from both sides. Some people that I’ve talked to were able to adopted their children with little to no cost while others paid close to $20,000 to adopt! While I don’t have an extra $20,000 laying around, I’m not under an illusion that someone is going to knock on my door with a baby and a gift basket and say “Congratulations, see you later”.

“Too much”? Did it cost too much to get pregnant and delivery your baby in the hospital? I’m thinking that most babies “cost” something depending on how they get to you.

While we’re venturing down the path of adoption, we’re not going to single out one place or another. While I’m pretty sure that we’ll be adopting locally/in America (when the time comes), it doesn’t mean that I’m against adopting from other countries. That plan just might not be the plan for us. However we’re not basing it off of which is easier. Now am I going to be booking plane tickets to Hati or China? Probably not, but I don’t think anyone should say that you should or shouldn’t adopt from a certain country. I think that should be up to the soon to be parents 🙂

#3. Aren’t you worried that they’ll always be looking for their REAL parents?

Um, YES. I’m constantly worrying that if we adopt that we won’t be good enough parents and they’ll run away to find their birth parents. It literally terrifies me. However after talking to a few of my friends that are adopted, my stress level about that has gone down a bit as most of them didn’t seek out their birth parents and all of them loved their adoptive parents as their own. But yeah, stop reminding me that they might run away to find their REAL mom! This isn’t a LifeTime Movie, I know that but still, it makes me panic a bit.


#4.Can you go to the doctor to be fixed so that you can have your own kids?

Well, why didn’t I think of that! I’ll head right on over there and let them slap on a little ol’ band-aid and I’ll be as good as new! Sorry for that does of sarcasam, I know it wasn’t nice. But referring to me as being something that’s “broken” isn’t nice either.

You see, it doesn’t work like that. I don’t want to get all internal organ personal on the blog but let’s just say that sometimes inside parts don’t work like they’re suppose too and there might not be a magic wand to fix it. Sure we could go through hours and weeks and months and years to try and “fix” me but that would cost a lot of $$$$$$ that I probably don’t have and not to mention that’s a bit of an emotional roller coaster that I have yet to agree too. Thomas and I are both on the fence about the “fixing” part.


#5. If you adopt, you’ll end up getting pregnant and then you’ll be stuck with two babies!

Well hot damn. Sorry for the language but maybe I’ll just totally make my body jealous when we adopt and it’ll decide to make one! No, that may have happened to your cousin’s friend’s sister’s BFF but it doesn’t mean that it’s automatically going to happen to me. If it does then we’ll be trilled and we’ll welcome that baby just as we will welcome one that we adopt but if it doesn’t happen then I’ll feel like even more of a failure. Yes not being able to “just get pregnant” does make me feel like a failure, I feel like I’ve failed my husband and my family.


#6.  What if you plan to adopt a newborn and then there is something wrong with it?

It… I really dislike calling our future child an “it” but if the time comes and there where is an issue we’ll cross that bridge and care for the baby just as we would our own! What if I get pregnant and give birth and there is “something wrong” with the baby? Do you think I’m going to just toss it aside and try again? No! Just no.


#7. Your family line won’t carry one, he/she won’t be a REAL “enter your last name here”.

I’ve already prepared myself for this as best I can mentally. I am 100% sure that when we adopt, we will have family members (on both sides) that will say our child isn’t a “Real Barrett”. They may not have the guts to say it to our faces but they’ll whisper it in the comfort of their own homes and make comments about it to others. How do I know this? Because I’ve heard comments they’ve made regarding others so I know they’re not above it. When we adopt, if we’re blessed to be able to adopt then our child will be a REAL Barrett and he or she will carry on our name (you know if it’s a boy). They’re not getting blacked out of the family tree just because we decided to adopt.


#8. We’ll at least you’ll get a baby the easy way and you won’t have to go through (enter some awful birthing story here).

I’m 100% ok with admitting that I’ve never been crazy about the idea of actually giving birth. I’ve always wanted to be a mom but the thought of someone growing in my “tummy”, kicking me in the bladder and head butting my lungs never really appealed to me. 😉 But I wouldn’t say that adoption is the “easy way”. I would love nothing more than to be able to give my husband a son or a daughter that we made together but I don’t know if that’s going to happen. Our journey to parenthood may not turn out to be a physically painful story but it’s already an emotional roller coaster ride and we’re literally just starting, like “standing in the driveway ready to knock on the door just started”.

#9. I don’t understand how someone could just give you their baby.

I’m just going to go out on a limb here and say that I don’t this anyone is just going to be giving away their baby to us. I mean it’s not like they’re at the Piggly Wiggly sticking the baby in the first car they see pull up. It’s not like someone’s just going to wake up one day and say, “yeah, I’m not feeling this whole kid thing, time for me to find you a new home.” (I mean I’m not saying that it hasn’t been done before but I’m doubting that’s the normal trend). This is a seriously decision that someone has made and for the most part, I’m sure it wasn’t an easy one. I have some serious appreciation for birth mothers, they’re probably making one of the hardest decisions of their lives.

For this one I’m literally going to copy and paste a status a put on my Facebook wall a few weeks ago!

“Dear friends and family. I know I’ve received a lot of wonderful comments and messages but have also received concerns over my adoption status yesterday 🙂 . If, IF Thomas and I do decide to adopt it doesn’t meant that we’ve “given up” on having biological children one day. But if the time comes and we are able to adopt, it means we have opened our hearts and home to a child that we would love and raise as our own. I won’t view that as giving up <3 I’ll view it as becoming a mother.”