Home » Side Dish » 4 Minute Steamed Corn on the Cob 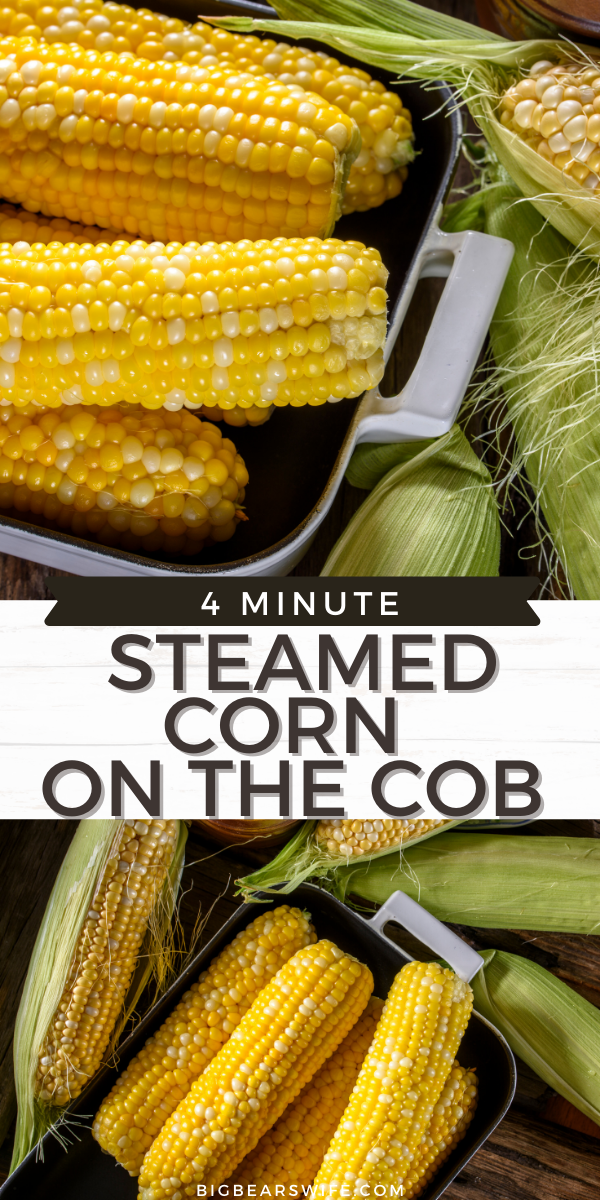 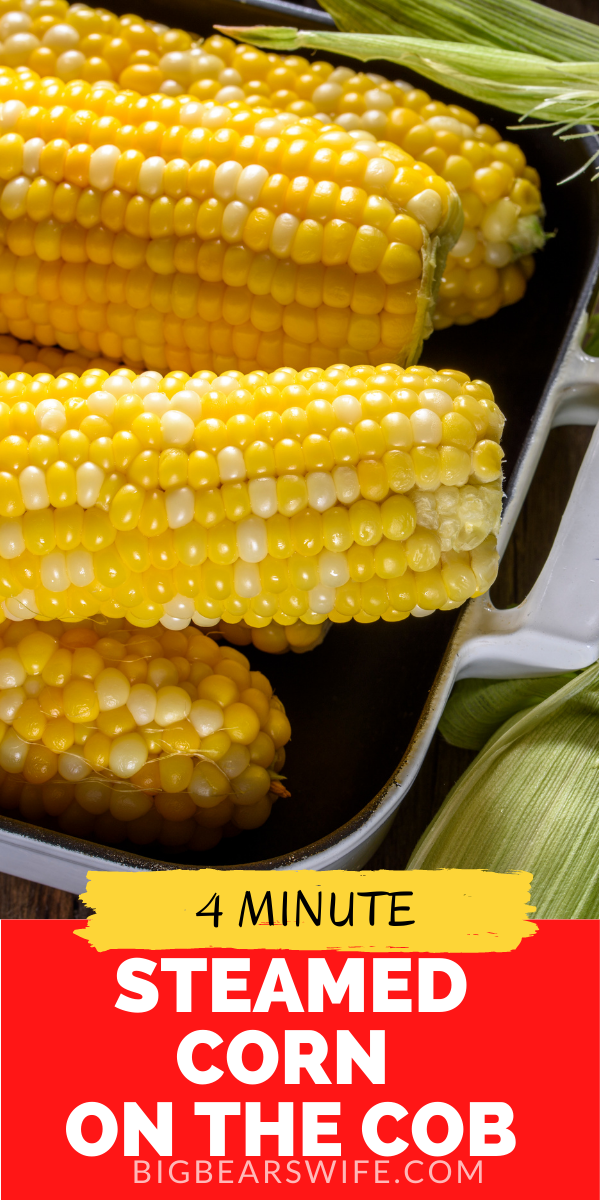 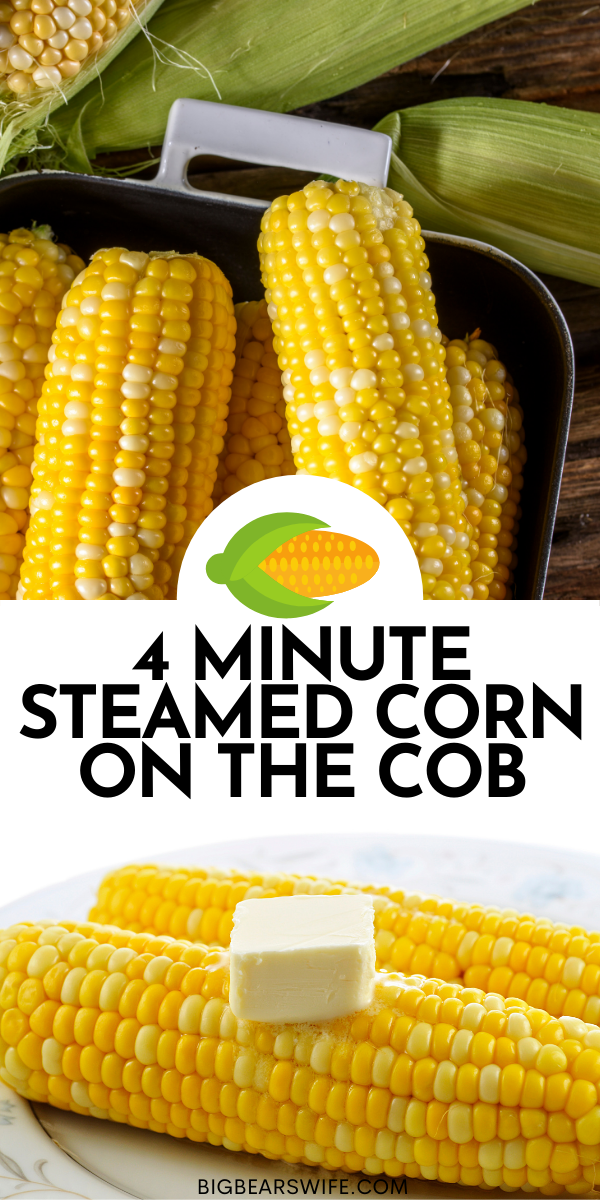 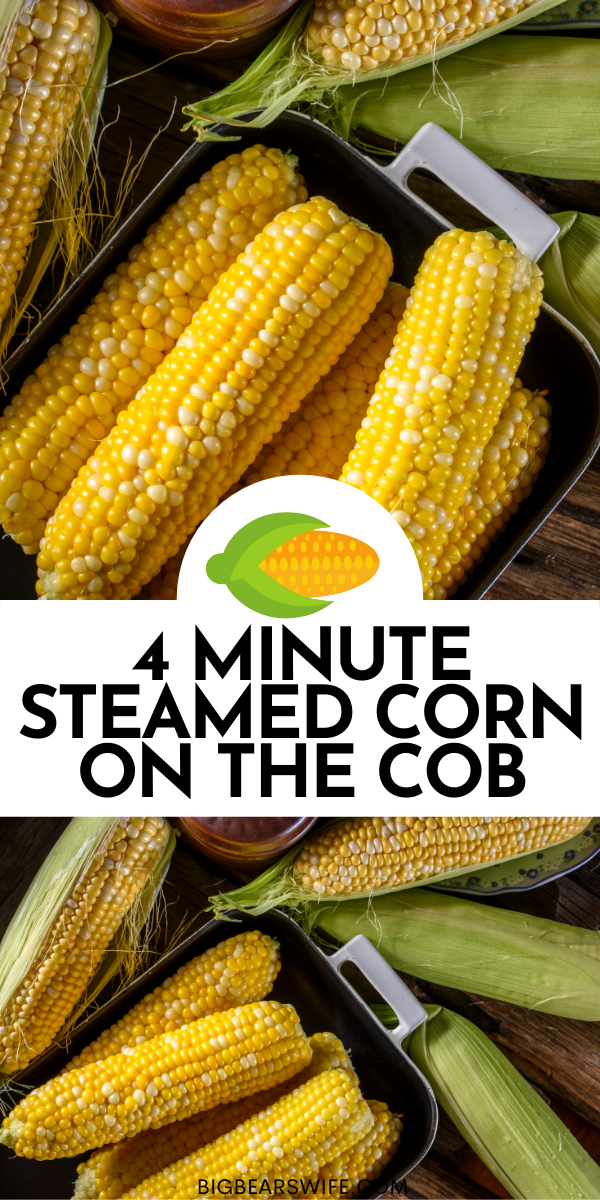 4  Minute Steamed Corn on the Cob! Did you know that you can cook the perfect ear of corn in  under 5 minutes? YOU NEED THIS TRICK! 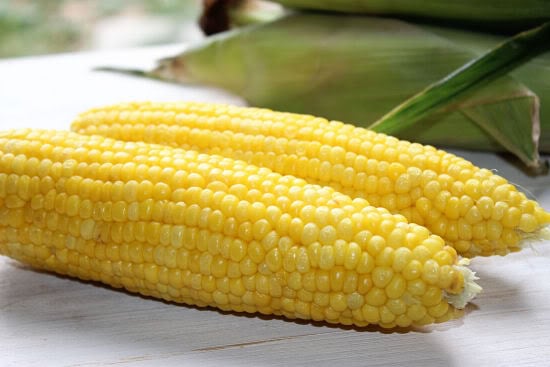 Has anyone else noticed that the temperate outside has pretty much reached HELL up into the 100’s. Holy Moly. It’s hott. Of course… what was I thinking, with all of the people posting on twitter and facebook screen shots of their weather forecasts and talking about it being hot, not to mention that I feel like I’m going to burst into flames the second I step outside, it’s hard to hide that fact that the South is on fire…. I’m guessing other parts of the country are getting pretty hot too, but I’m in the south… so yeah….
As I’ve said 1,000 times before, it’s hot… I don’t want my oven on very long at all, I don’t want the stove top on, and I sure as heck didn’t feel like standing out in the heat today to cook on the grill. I mean I know some people don’t mind that, but me.. no.. no.. no.. I don’t want to be in the heat at all. I know.. I’m a baby… I can’t help it. 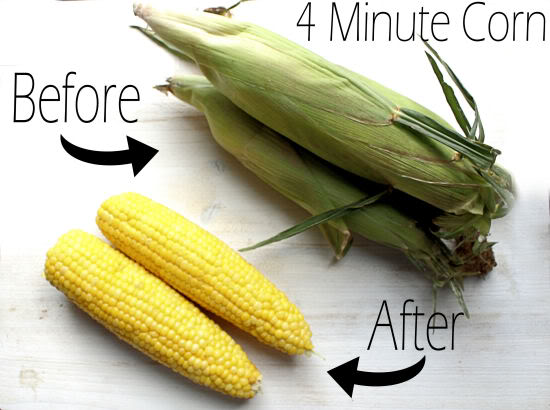 But I dragged myself into the kitchen today to cook 2 bags of corn I got at the store the other day. I got them on sale, and I figured I would cook them, cut the corn from the cob and then freeze it to use later. But the thought of heating up the oven or the grill didn’t seem like a good idea…. since it was already 100F in the house… ok well maybe not that high, but it was hot.
This option was much better, and within 5 minutes my first “test” corn on the cob was cooked, cleaned, scrapped and ready for the freezer.

Place the corn still in the husk into the microwave for 4 minutes per ear of corn. 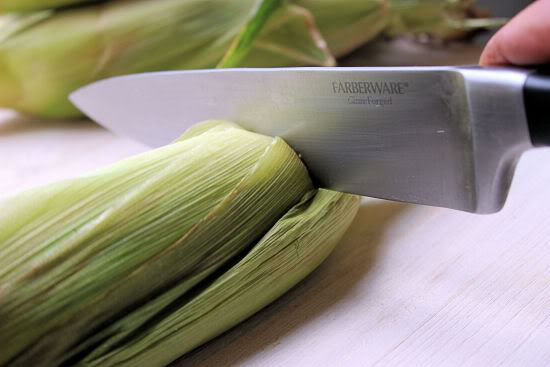 Once the corn is done in the microwave, carefully remove it with an oven mitt. 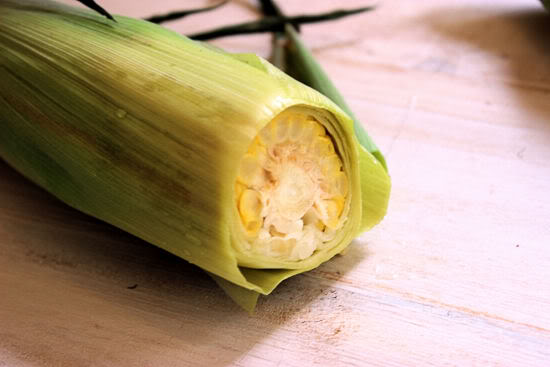 Cut the bottom off of the ear of corn, but NOT the end that opens with the silk. 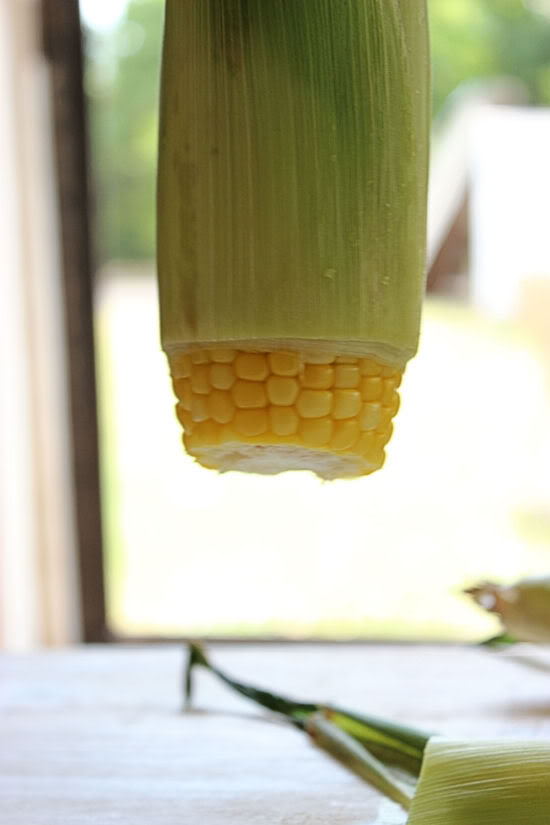 Now grab the silk and husk at the top of the corn with an oven mitt and shake. 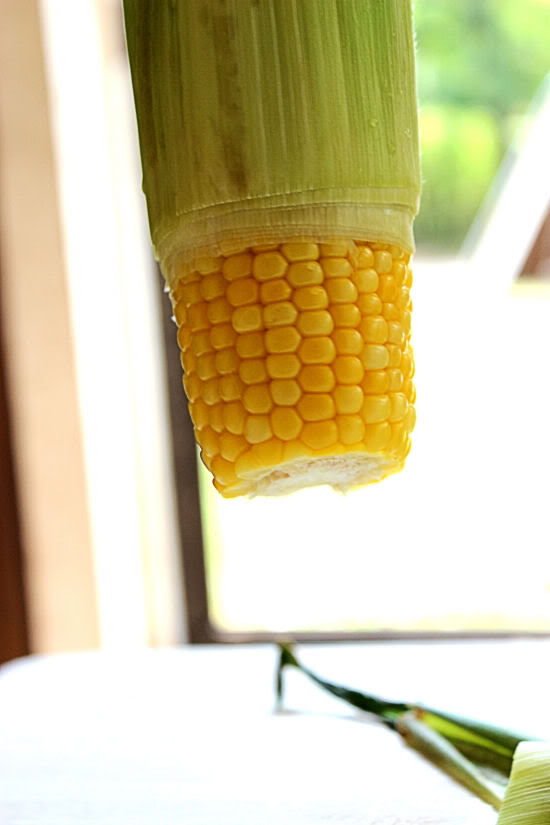 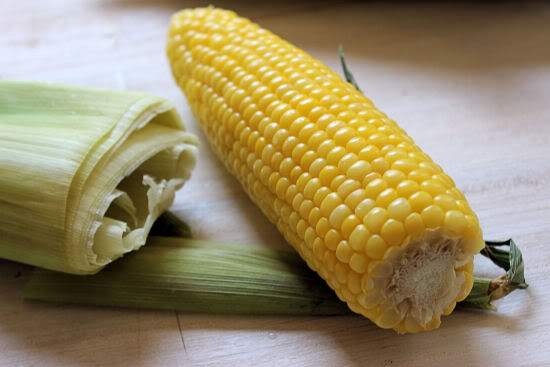 And finally, tada! Steamed corn! Perfectly done in 4 minutes!
I saw a video of this on you-tube, and thought of it today when I was getting ready to cook some of the corn I got on sale the other day.
I didn’t listen to the sound on the video when I watched, so I thought it just heated it enough to remove it from the husk with no silk. I blame it on the heat,  that my brain wasn’t working right because of the heat ….. I didn’t figure out that it was gonna cook in the microwave all the way, because when it came out of the husk already cooked after 4 minutes, it’s like angels started singing behind me haha. It pretty much steams inside the husk.
Here is the video that I found:  Shucking Corn

4  Minute Steamed Corn on the Cob 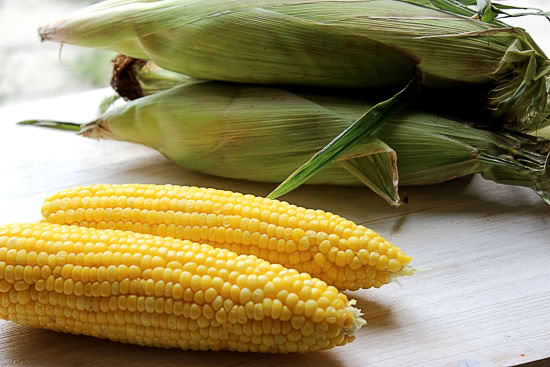 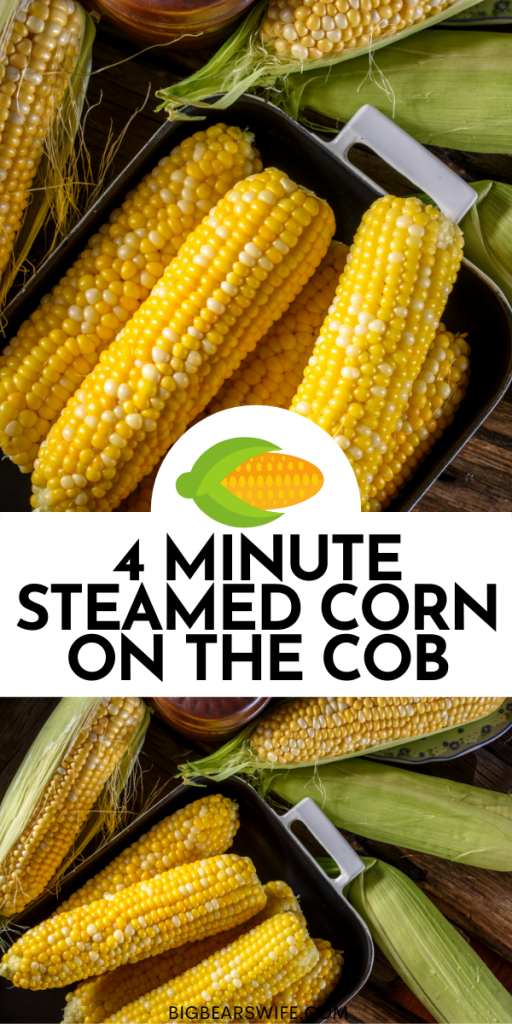