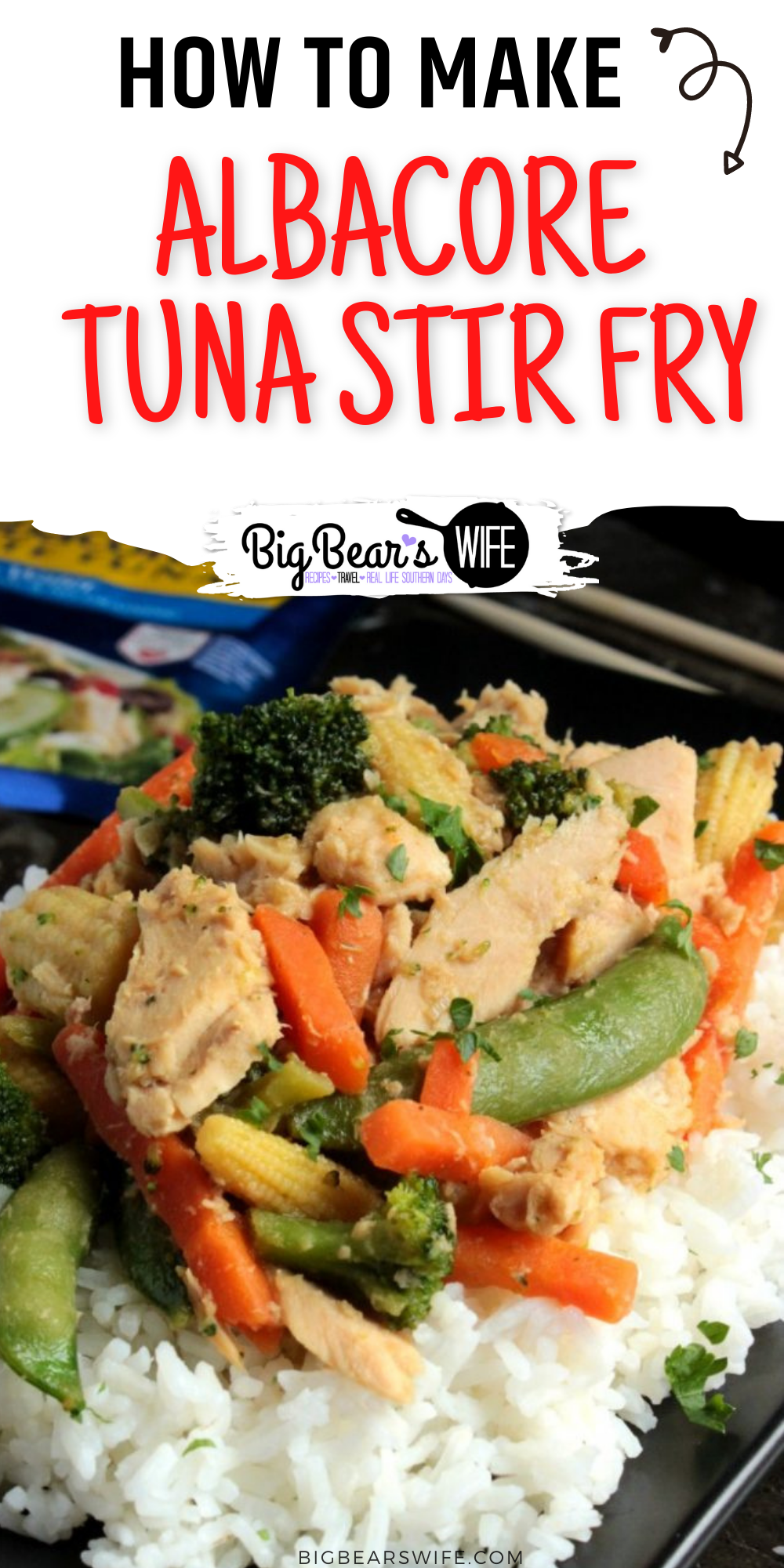 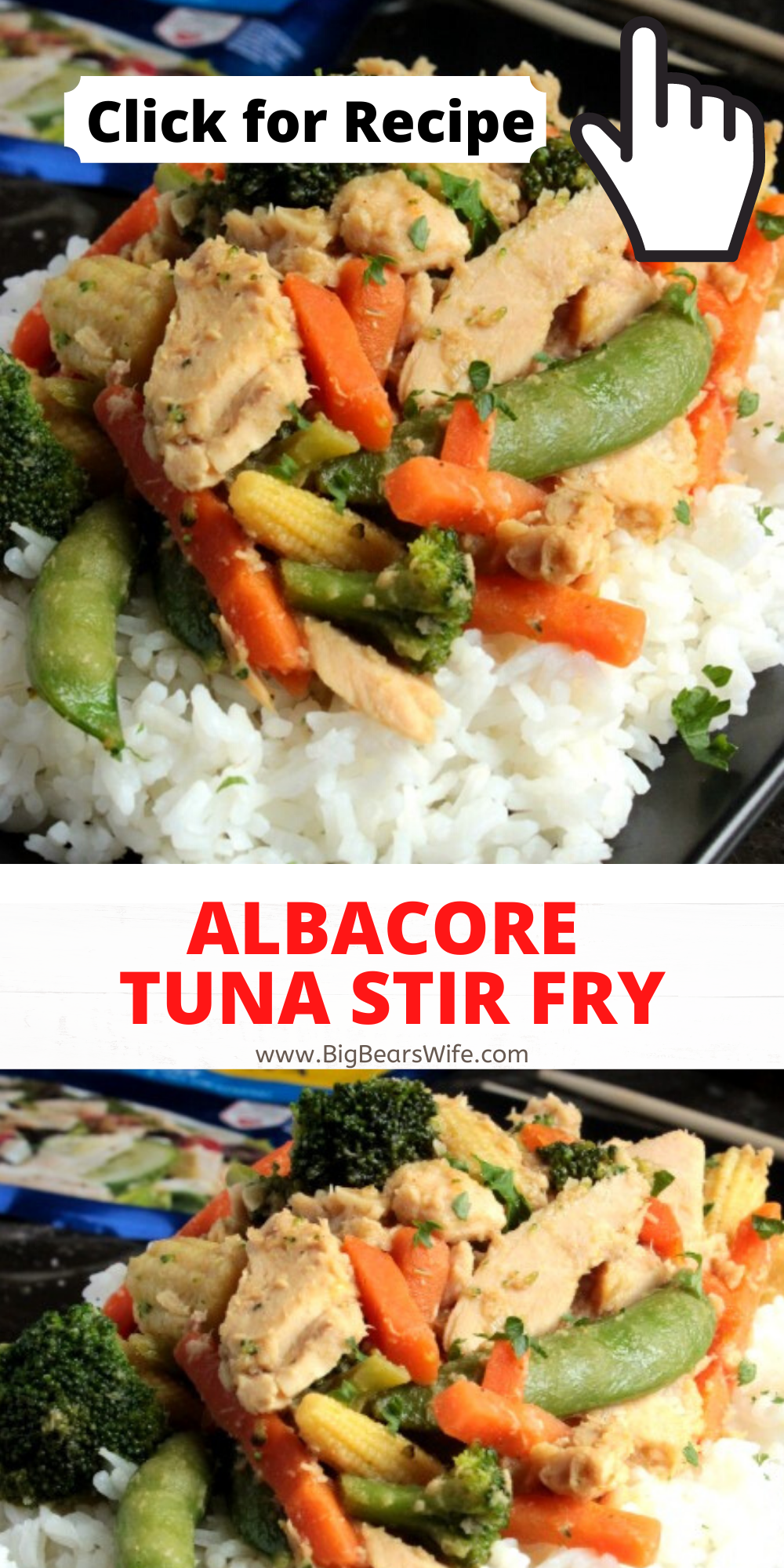 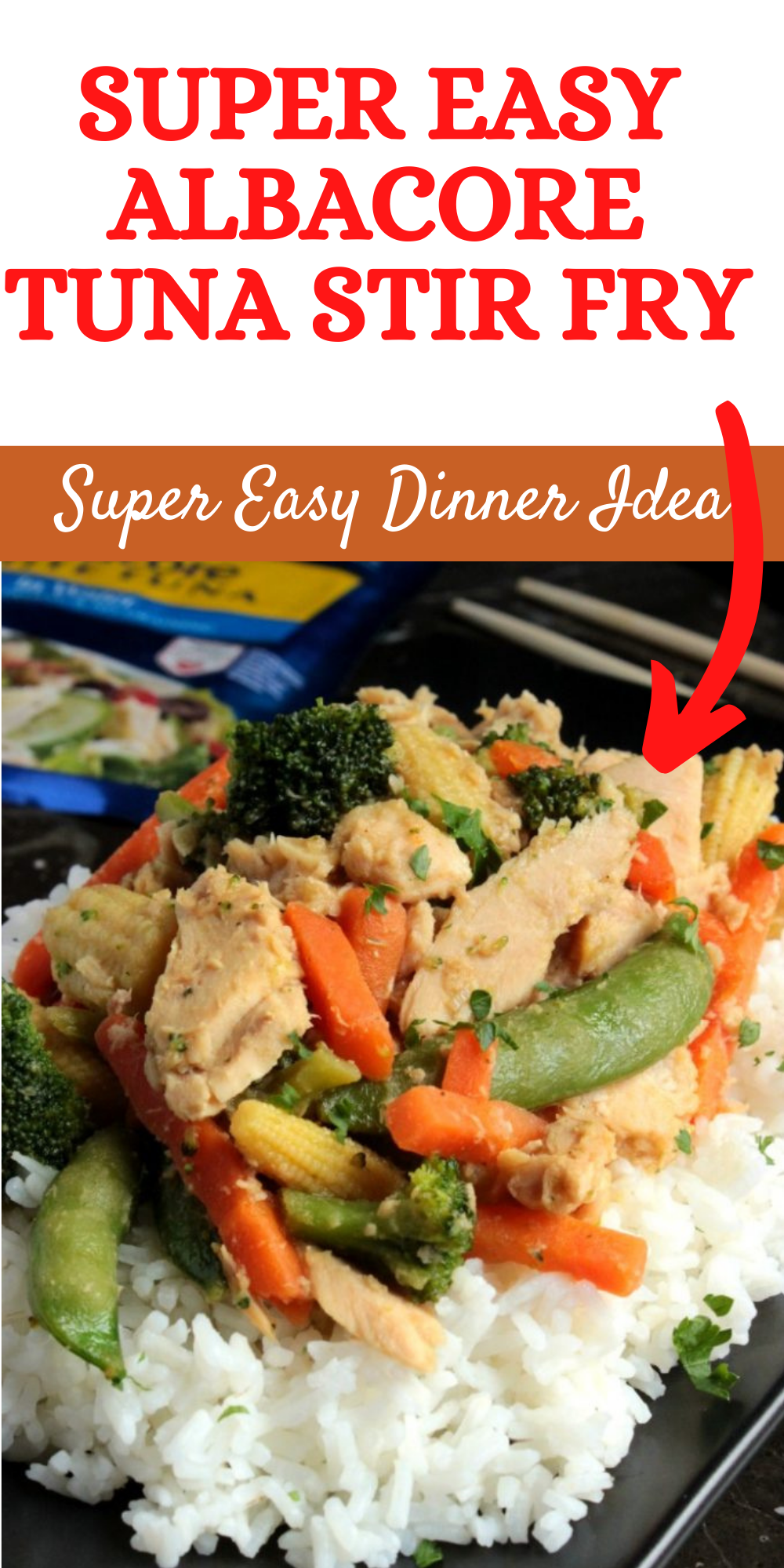 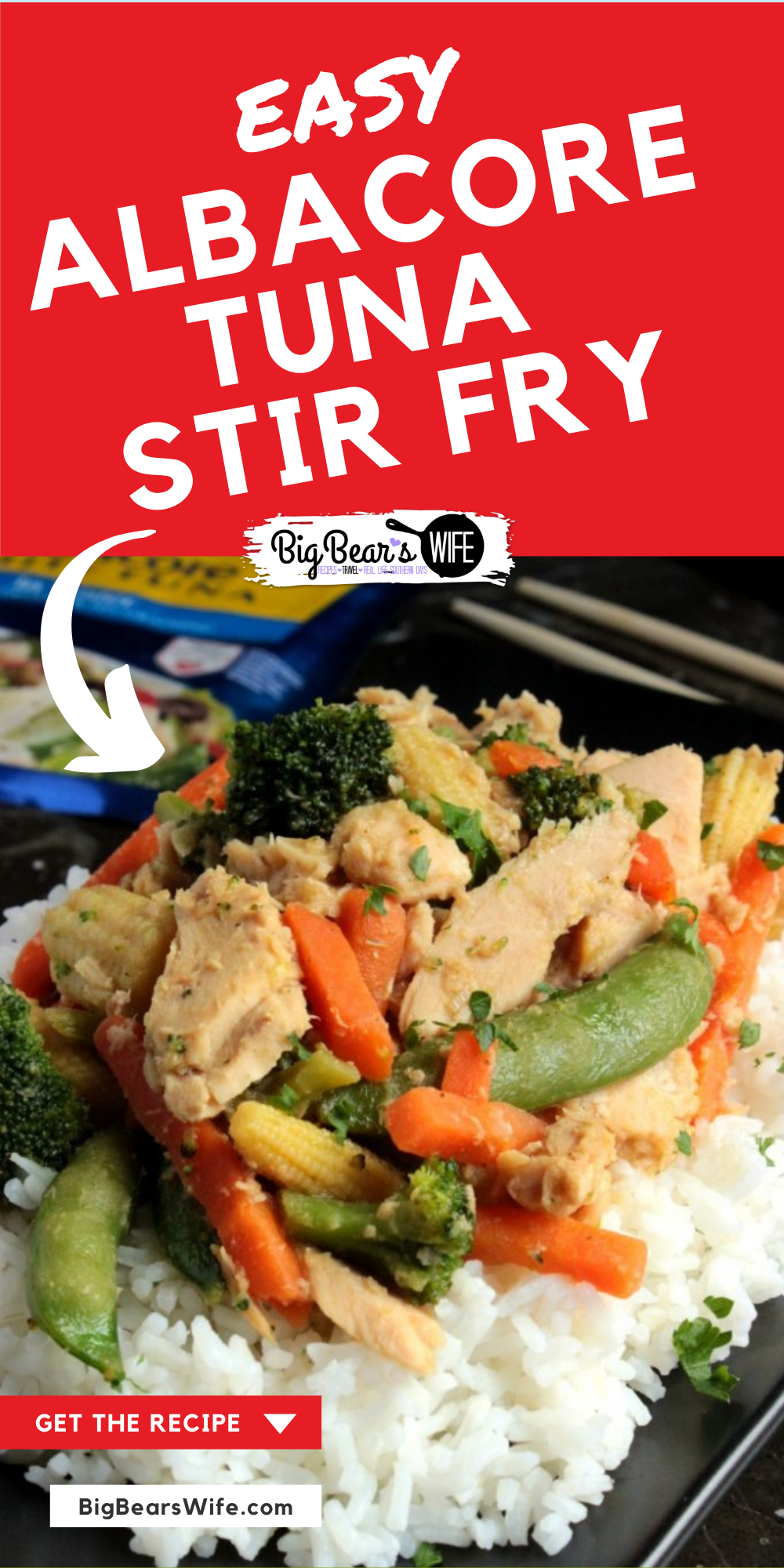 Albacore Tuna Stir Fry is a super easy dinner for 4 that’s ready in under 15 minutes!

Starkist did not sponsor this post. They did sent me a few samples of their flavored tuna pouches but I wanted to post about this recipe of theirs because Thomas loves it. Also posting because Thomas is a huge fan of Starkist and we have a special attachment to these little pouches of tuna thanks to the care packages that I sent him while he was deployed. 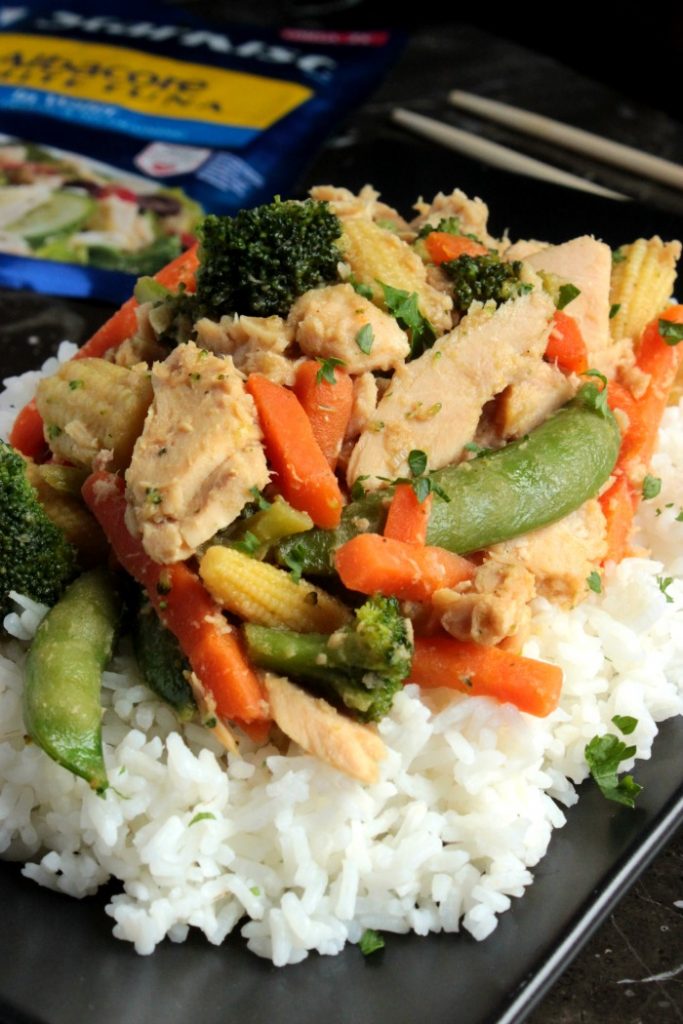 This post is 100% for my husband. haha I know, I know, most of the food that I cook is for Thomas and I but this one, I really did want to share this recipe with y’all because of Thomas and his love of StarKist tuna.

If you know Thomas and I then you already know this but for those of you that may be new to the blog, you may or may not know that Thomas was in the military when I met him. 🙂 When we got married, my sweetheart was a Corpsman for the US NAVY stationed at Camp Lejeune, green-side, with the United States Marine Corp. I went from a small town waitress to a military wife overnight and it was quite an adjustment.

So many things changed for me when I married Thomas, not only was I learning how to be a wife but I had also been tossed into a world of uniforms, military bases and deployments. Y’all marriage is hard enough to get use to but getting married and then being dropped off on a base as a new military wife is even harder. haha.

So what does that have to do with tuna? Well haha I’m going to tell you, don’t you worry. 🙂 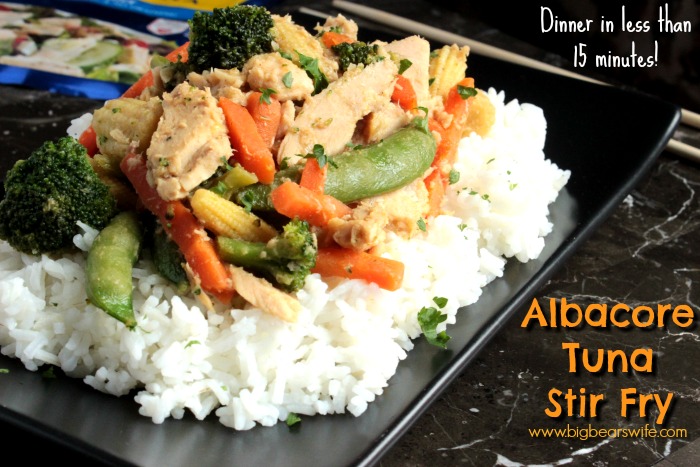 About a year into our marriage Thomas got orders to deploy to IRAQ again. I was beyond scared and when the day arrived I gathered all of the strength that I had while I said goodbye to him and waved as the buses pulled away but I was a mess. I was alone in a military town, hours from friends and family and my husband had just started his 2nd journey to a desert war zone.

Thankfully we were able to chat online while he was gone and some nights I was lucky enough to get 2 am phone calls from him when he had a break during his day. However, since I couldn’t talk to him whenever I wanted to, I resorted to the next best thing. I spent most of my time writing letters to him and putting together care packages for him and his buddies.  I don’t know exactly how many care packages I sent to him while he was over there but I had a “care package” station set up in my office at home with boxes, custom forms, stockpiles of supplies to send to him and cards for every occasion.

I tried my best to send him exactly what he asked for in his e-mails and tried to also throw in a few extra surprises to make him smile when I made his care packages each month. He spent his birthday over in Iraq that year and when August came around, I baked like 8 little chocolate cakes in mason jars, sealed them up and shipped them over to him with jars of chocolate frosting so that he could celebrate his birthday with his buddies with birthday cake. I sent his favorite candy and I sent packs of razors. I sent cans of dip and more socks than I can count.

I also send a huge amount of StarKist tuna pouches, he loved them, he requested them, so I made sure that I sent stacks and stacks of them. I literally sent so many packages of StarKist tuna to Thomas while he was over there that I can’t look at a pouch of StarKist tuna without thinking about his care packages. 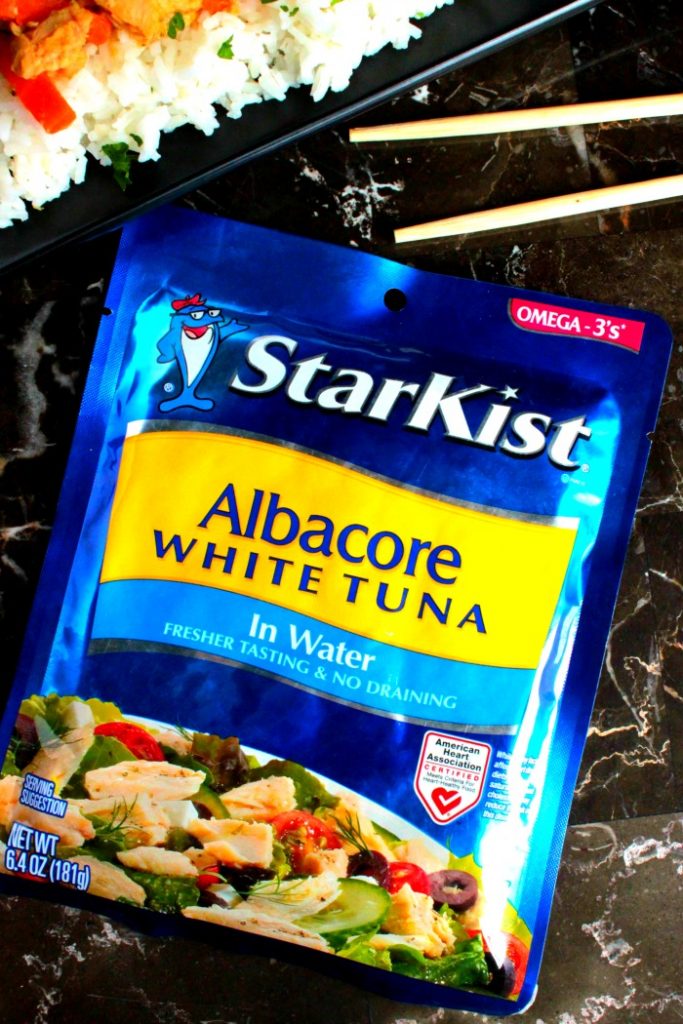 Oh and do you know that even though I sent boxes and boxes of StarKist tuna over to him, he never did get tired of it. He still loves it and he still can’t get enough of it, like right now, I’m pretty sure we have about 10 pouches of it in the pantry. 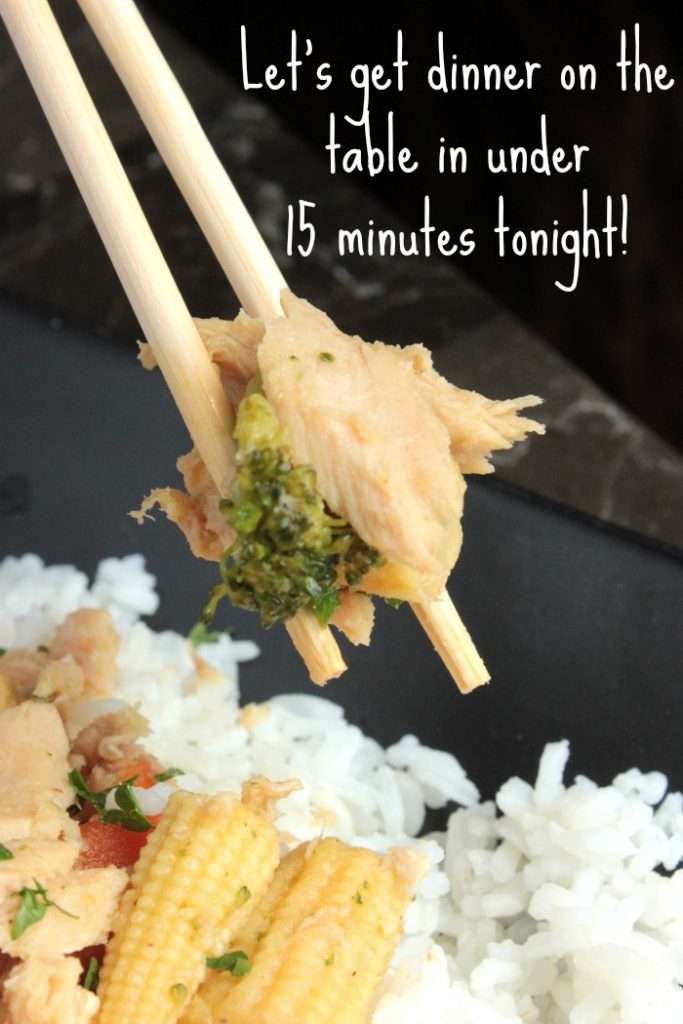 So this may not be the most traditional Memorial Day weekend recipe out there. Ok I know it isn’t….but that’s ok.

I know that the web is going to be spiraling out of control with burger recipes and potato salad recipes for BBQ menus this weekend but I just felt like I wanted to post something a little different. A little something that my husband loves, something that I’m going to make for him this weekend, something to put a smile on his face.

This weekend will be a mix of emotions for us and everyone that has connections to the military. We will be grateful for the loved ones that are still here and we will remember the ones that aren’t.

I didn’t really “feel” Memorial Day before I met Thomas and before I became a Military Wife. Before all of that it was just another long weekend, however it’s become so much more emotionally for me. 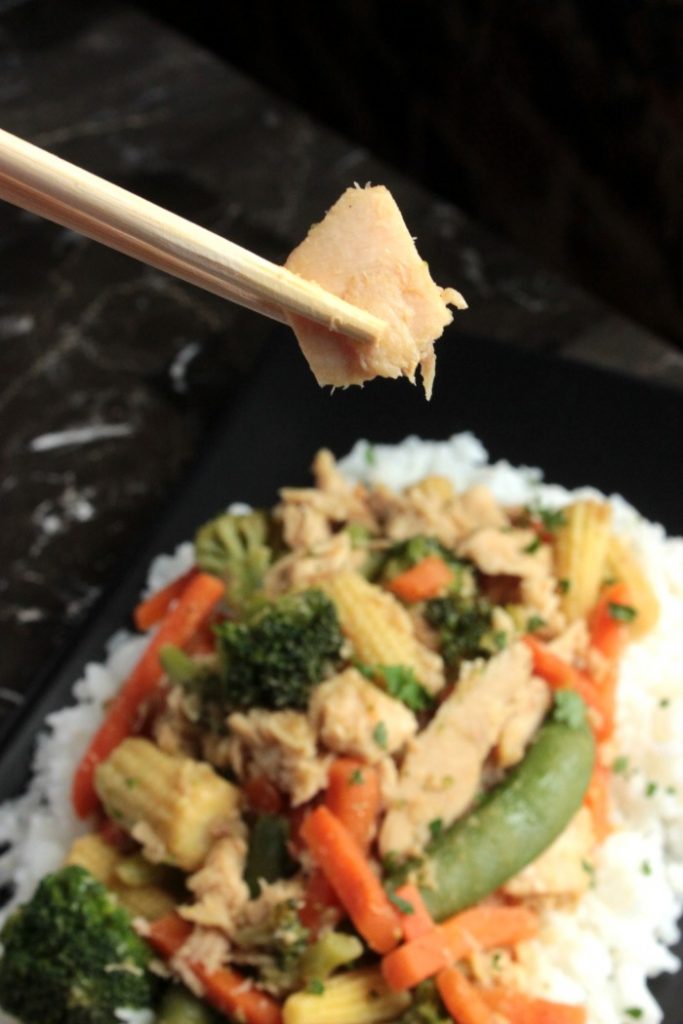 Since Thomas is a veteran I like to make any “patriotic holiday” special for him, but I know that this weekend is for his friends and brothers (and sisters) that didn’t make it home. I know that this weekend he will put on a smile and he’ll be present for family activities but I also know that at some point he will grieve for his friends that he lost, I know that it’ll hurt.  I just hope that we can be there for him and do little things to put a smile on his face this weekend, even if it’s little things like making a stir fry that he’ll love. <3 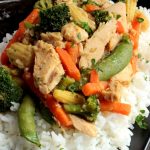 Dinner for 4 that's ready in under 15 minutes!

Source: This recipe re-printed with permission from Starkist 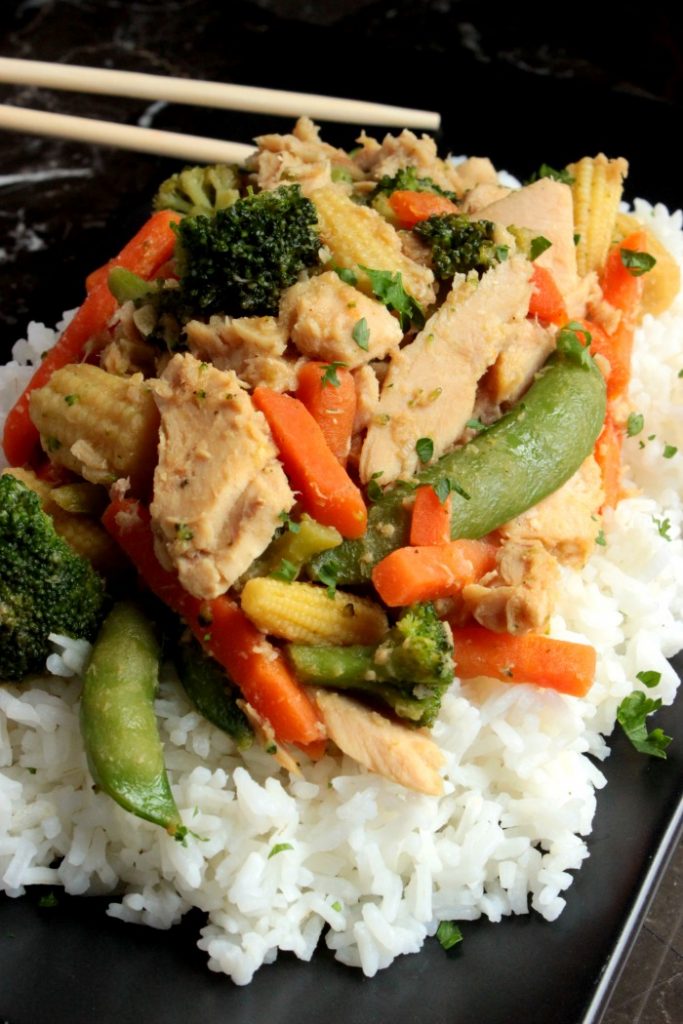