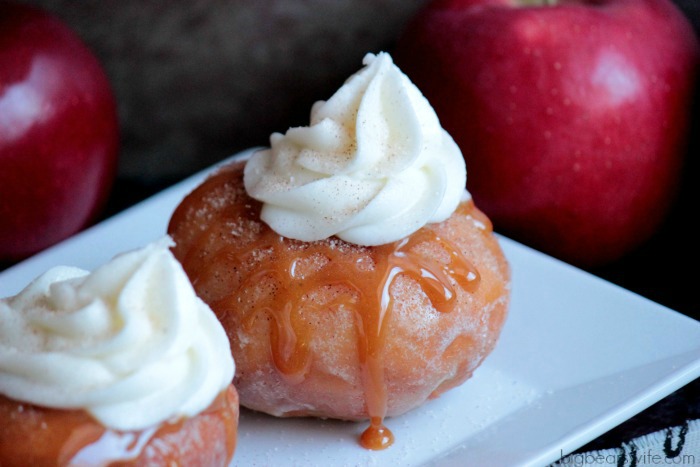 I’ve been kind of getting off of the “healthy band wagon” when it comes to blog post lately. I really tried though, I tried to be all like “I love Lettuce XOXOX” but I just can’t keep it up. haha. I can handle the salads, piles of steamed vegetables and endless grilled chicken once in a while but I can’t, y’all I just can’t eat it all the time. It isn’t going to happen. I’m the worst, I know.

But I mean there are other healthy option right? Like fruit! I can do fruit. I can eat fruit all day long.

I can really get into eating fruit when it’s stuffed into homemade donuts and fried.

Oh and did I mention that I poured sweet heavenly caramel all over those homemade donuts and topped them with whipped cream?! I know…I know…I’m the worst. 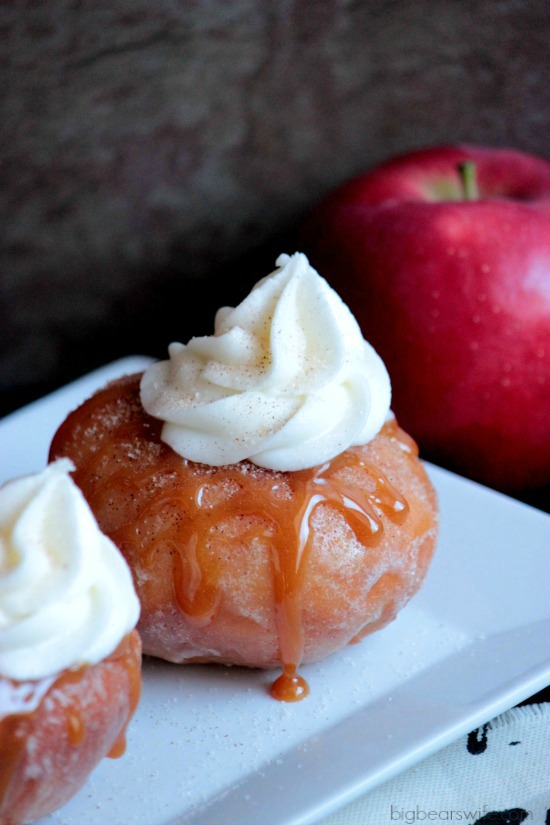 I pretty much just need these apple pie doughnuts and a huge, warm mug of hot cocoa and everything will be right with the world. 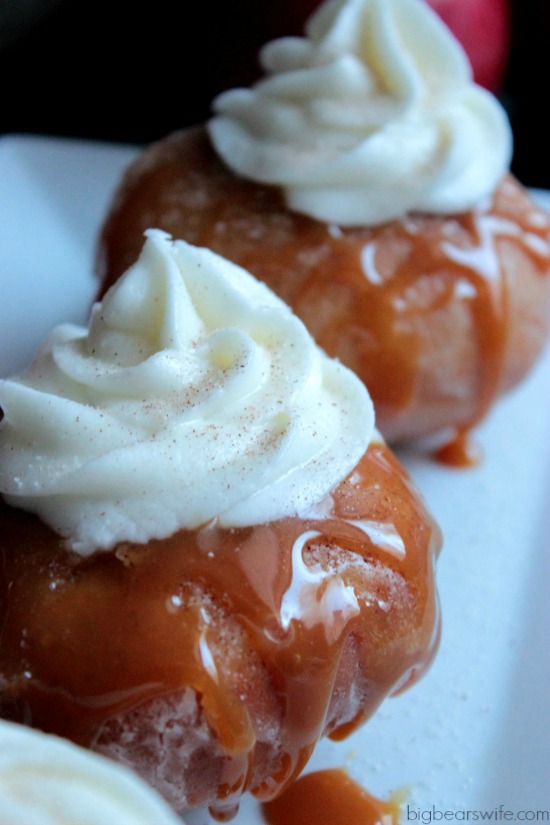 So, I’ve got two settings when it comes to apples.

#1 – Just Eat them – raw, crunchy, apples. This is how I grew up eating them and it’s just how I like my apples.
#2- Bake/Cook them with brown sugar and cinnamon. – If you’re not going to just bite into them and eat them you better be adding brown sugar and cinnamon. Oh and if you really want to be friends, you better just go ahead and add caramel. 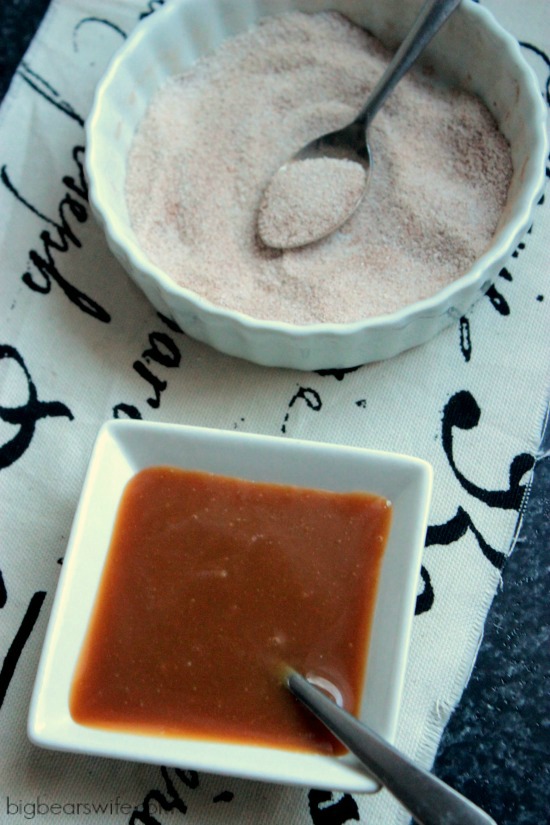 I try to branch out sometimes. I really do. But still find myself reaching for the brown sugar no matter what type of apple recipe I’m trying to create.

It’s just how my brain is programmed. 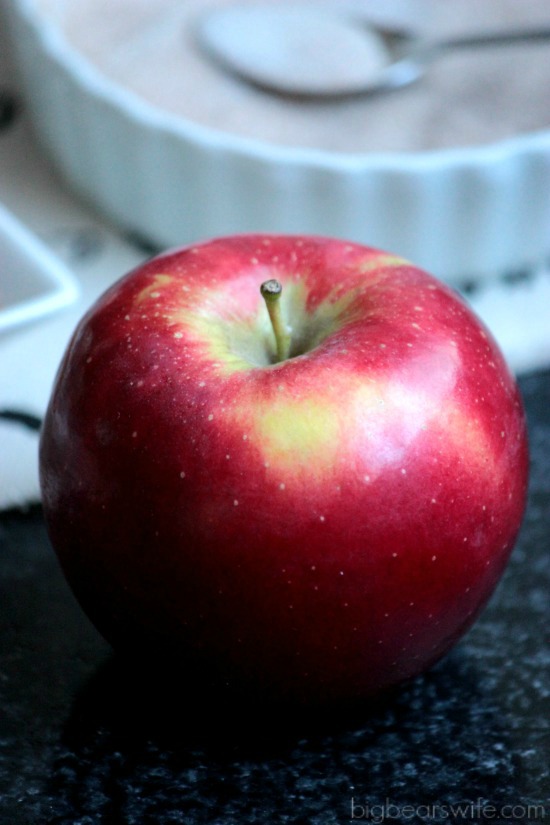 Well, I went with Option #2 when I was working with these RubyFrost apples and the results were fantastic. 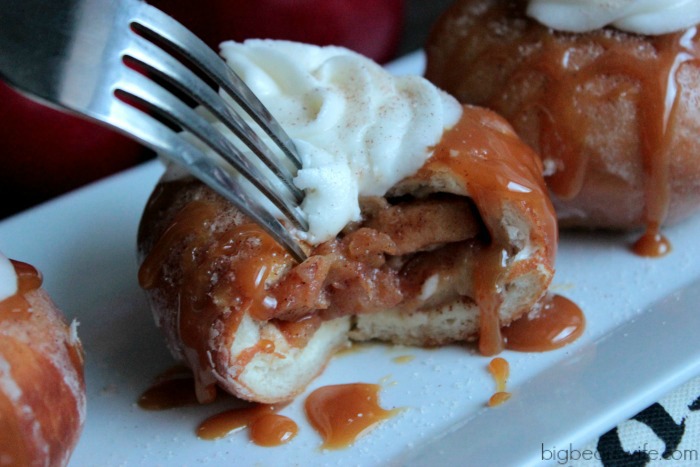 I made up a simple apple pie filling, stuffed that into homemade doughnut dough and got to frying.

Ok, ok BigBear got to frying them…because he’s awesome like that. He tells me that his skin is tougher so he’d rather get burned by the oil in case something spatters. *all together now* Awwwwwwwww!!

Isn’t he the sweetest. 🙂 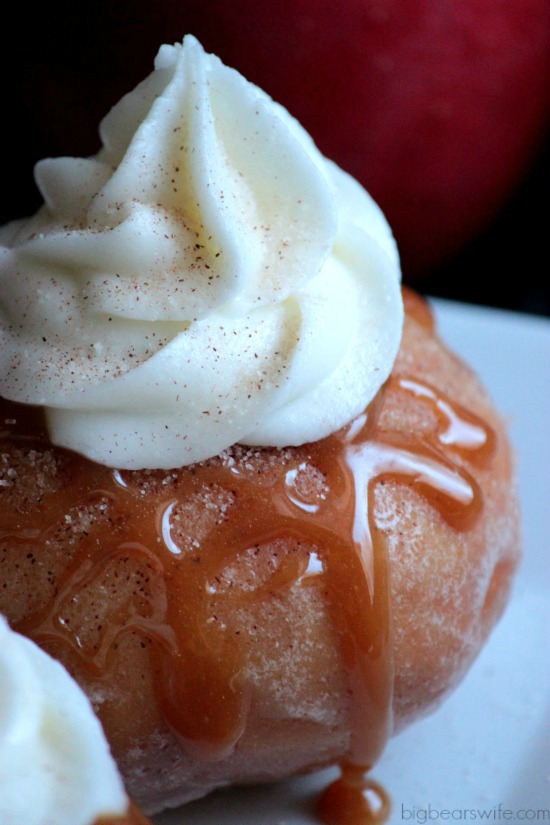 So what are you waiting for? Let’s make some doughnuts!

Peel apples and chop into small pieces. Add apple to a sauce pan.
Add in the water, butter, cinnamon and brown sugar. Stir.
Cook on Medium heat for about 25 minutes, stirring occasionally.
After 25 minutes, remove from heat and let cool.
For doughnut dough:

Add the yeast to the warm water and set aside to rest for about 3-4 minutes.
In the bowl of a mixer, mix the yeast/water with the scalded milk, sugar, salt and butter. Mix well.
Add in 4 cups of flour and mix well. Scrap down the sides of the bowl as needed.
Add in the last 4 cups of flour and mix until everything is combined.
Cover the bowl with a tea towel or loosely with plastic wrap. Let sit in a warm place for 1 hour.
After an hour, remove dough from the bowl and place onto a floured surface. Punch the dough down and roll out until the dough is about ½ an inch thick.
Cut dough into 4×4 squares.
Place a tablespoon of apple pie filling in the center of one of the squares. Bring the four corners of the dough to the center. Bring the rest of the edges to the center as well and pinch closed. Carefully roll the ball of dough in your hands to form a ball.
Place on a baking sheet to rise. Continue with all of the dough and pie filling.
Let doughnuts rest for 30 minutes.
Heat oil to 350F.

When the doughnut is done cooking, lay it on a paper towel lined surface to cool for a moment. But before it cools all of the way, dip it into the glaze, place onto a cooling rack. While the icing is wet, sprinkle cinnamon and sugar onto the top of the doughnut. Let cool.

Repeat steps until all of the doughnuts are done.

To serve: Top with Caramel and Whipped Cream. Serve warm or at room temperature.