A sweet classic southern pecan pie with the smooth touch of bourbon baked inside! The sun it out and the skies are clear! This past weekend the snow started Friday morning and went on forever. Ok, well it didn’t go on forever but it went on for the entire day and way on into the next morning. I know that for people up north that doesn’t seem like a TON but here in the south it’s a lot!

We don’t really get cold weather here until January or February, then during that time we will get snow maybe once or twice and that’s it. We might get some extra snow flurries but nothing that will really stick. So this weekend when we got our first (and maybe only) giant snow of the year, everything kind of shut down.

You know that people down here in the south go crazy when it starts to snow. 😉 So, while we could have forced our way out into the snow with our SUV, we decided to play it safe and cozy up in the apartment for the weekend.

Thomas had to work Friday but he actually got to have Saturday and Sunday off because of the snow, which was perfect because I was home from work this weekend too. We caught up on TV shows together, went on snowy walks around downtown with the dogs and got to relax a little.

Well, Thomas relaxed a lot and I stayed in the kitchen a lot. haha The kitchen is one of my happy places, so with all of this time “snowed in” to the apartment, I took the opportunity to bake a bit and re-do some recipes that needed better photos for the site. This is one of the recipes that I started working on to photograph this weekend. I made my Chocolate Chip Pecan Pie a few years ago and since then I’ve been wanting to work on a bourbon version of this dessert. Now, I know that some people don’t have bottles of bourbon in their cabinet or freezer, so let me tell you what I do. 🙂 You only need like 2 tablespoons for this Bourbon Pecan Pie, so if you don’t have bourbon and don’t want to buy a big bottle for a pecan pie, buy airplane bottles. 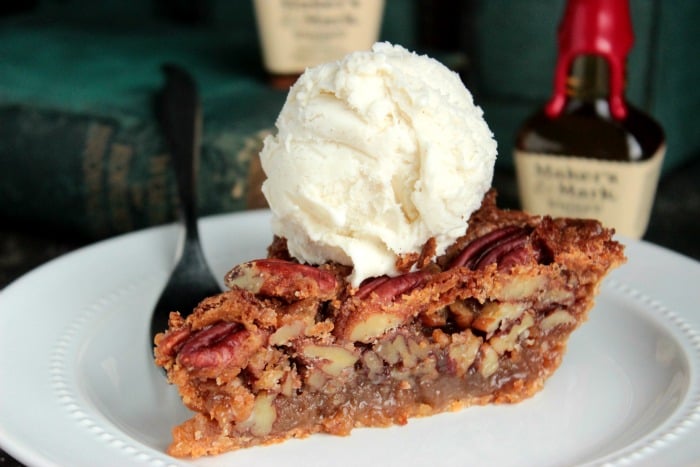 Haha, YES airplane bottles of bourbon come in handy when it comes to baking! I have like one medium bottle of whiskey in the house but other than that we really don’t have big bottles of alcohol laying around.

However, I do have a little stash of airplane bottles of whiskies and bourbons for pies, cupcakes and other recipes. They’re the perfect size for cooking and baking, unless you are one of those people that has huge bottles of bourbon around. 😉 If that’s the case, spare a little for this pie! Press pie dough into a 9- inch pie dish. Set aside.

In the bowl of a stand mixer, mix together the brown sugar, sugar and eggs. Mix until everything is combined and creamy.

Mix in the melted butter, milk and flour. Stir to combine.

Slowly mix in 2 cups chopped pecans. Mix in the bourbon.

Pour the mixture into the pie shell. Sprinkle, or neatly arrange, pecan halves over the top of the pie.

Bake the pie for 45 minutes or until done.

Set the pie on a wire rack and let cook for 30 minutes. Middle of pie will firm up with cooling.