The vacation days have been picked out, the resort has been selected now it’s time to figure out which Walt Disney World Parks you’re going to hang out at! I’m here to tell you how I plan our days and this post will help you figure out what you’re doing when You’re Picking Your Disney World Parks, Days and Tickets!

This post is NOT sponsored, we just love Disney and I love to plan our trips. 🙂 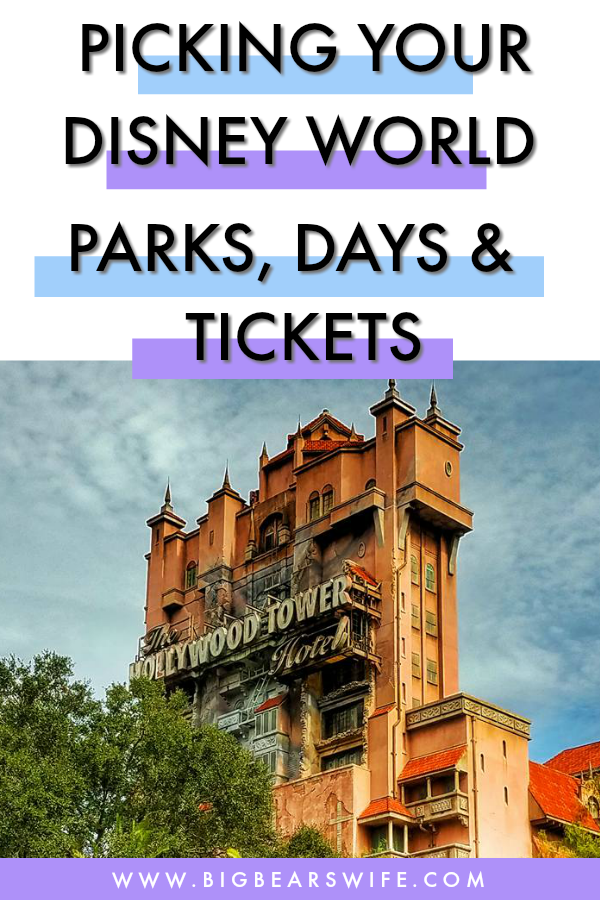 This is a part of a Disney Vacation Planning Series here on BigBearsWife.com – This series is a work in progress and I’m going to be constantly adding to it. To see all of the parts, visit the Disney Section of my blog!

If you’ve been following along on my Disney Vacation Planning Series, you’ve read about picking your dates, and finding the perfect resort. Now it’s time to figure out which parks you want to visit, when to visit them and what types of tickets you need.

Park and Ticket preferences are going to vary from person to person. They’ll also depend on who’s in your group and what everyone is interested in. 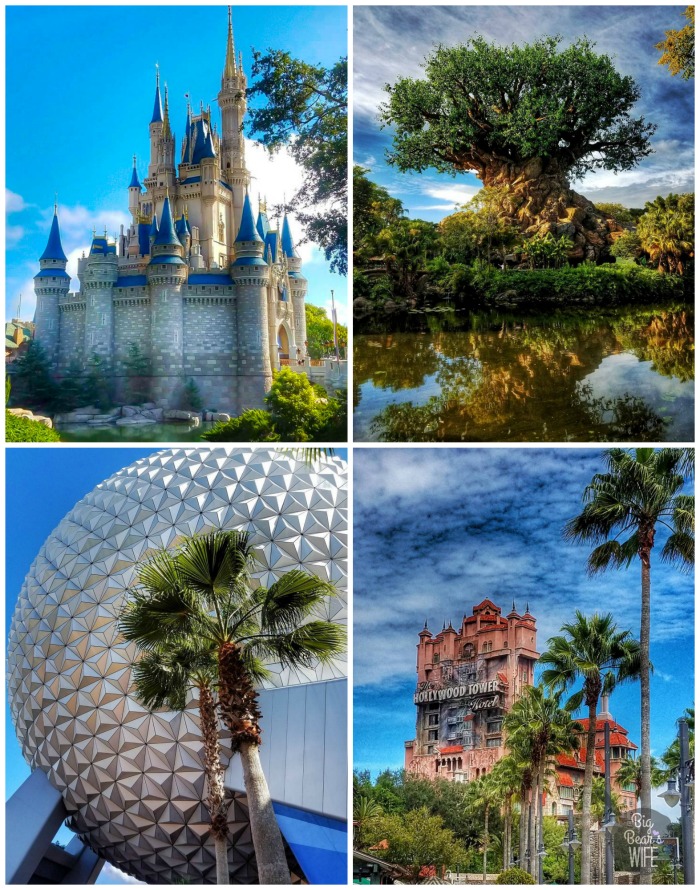 There are 4 major theme parks at Walt Disney World and 2 water parks.

I’ve never been to the water parks. Even though I love water parks, I can go to water parks in Virginia so we don’t work those into our plans. Plus, I’m a red headed, freckled, pale skinned person….water parks = painful sunburns for me so I normally stay away. 😉

The Parks and what they offer:

Epcot – a few rides, shows, festivals, restaurants, World Showcase (sections of the park built to look like and seem like different countries with restaurants and shops), fireworks. I always feel like this park is geared more towards adults but some kids might love it. I hated it as a kid and love it as an adult.

I’m going to go into more details on the parks and tickets in this post here, but I wanted to give you a quick idea about picking parks.For instance, if you’re going for a short trip, you might want to go to the Magic Kingdom and Epcot and save the others for another time. If you’ve got kids you might want to shoot for Magic Kingdom, Animal Kingdom with some rest/resort days thrown into the vacation.

For Thomas and I, we spend all day at Magic Kingdom, we spend a day at Epcot and then we split a day for Animal Kingdom and Hollywood Studios.

Hollywood Studios isn’t my favorite and normally by lunch time I’ve had enough of the humidity of Animal Kingdom. 😉

However, now that we have Jackson, we’ll probably do more time at Magic Kingdom and Animal Kingdom and less time at Epcot because of him.

It’s just going to depend on what you want to see and who is in your group.

When to go to each park?

We ALWAYS go to Disney Springs on our first evening at Disney. It’s free, there awesome restaurants, great shops along with live music and performances! It’s a great way to get into the Disney mood!

I base our park days by which days we’re traveling and which days have Extra Magic hours! YES! Extra magic hours are awesome and I’ll go more into detail on how I plan our days and park days here.

There are four types of tickets. (Actually probably more but these are the 4 I’m talking about)

This tickets get you into all four parks in the same day so you can hop from park to park during the day.

These tickets are special event tickets! During Halloween and Christmas, Disney hosts special holiday park parties for guests! You have to buy separate tickets for these parties. Prices range from around $70-$100 per ticket depending on date and holiday.

Disney’s water parks are open year round, except each of them close for a couple of months at different times for refurbishments. So make sure to check your vacation dates to make sure they’re both open or the one you want to visit is open!

Planning Which Park for Which Day:

I plan our park days by Extra Magic Hours!

What are Extra Magic Hours?

Extra Magic hours are extra theme park hours either before the parks open or after the parks close and they are available to guests that are staying at Disney resorts! Each park has it’s own day and on these days, depending on which park has Extra Magic Hours that day, you can enter a that park one hour earlier or stay in a park up to two hours later than normal hours.

We always drive to Disney World and it’s our tradition to leave here about 2am or 3am and drive straight to Disney with a few stops for breakfast, lunch and of course rest stops. With stops, we normally arrive at Disney World around 3pm. We check into our resort and then we change and head to Disney Springs for the evening.

Then our park days depend on which parks have Extra Magic Hours.

Example of my planning using the hypothetical trip that we started at the beginning of this series May 6th – May 11th.

Here are the Extra Magic Hours for that week: 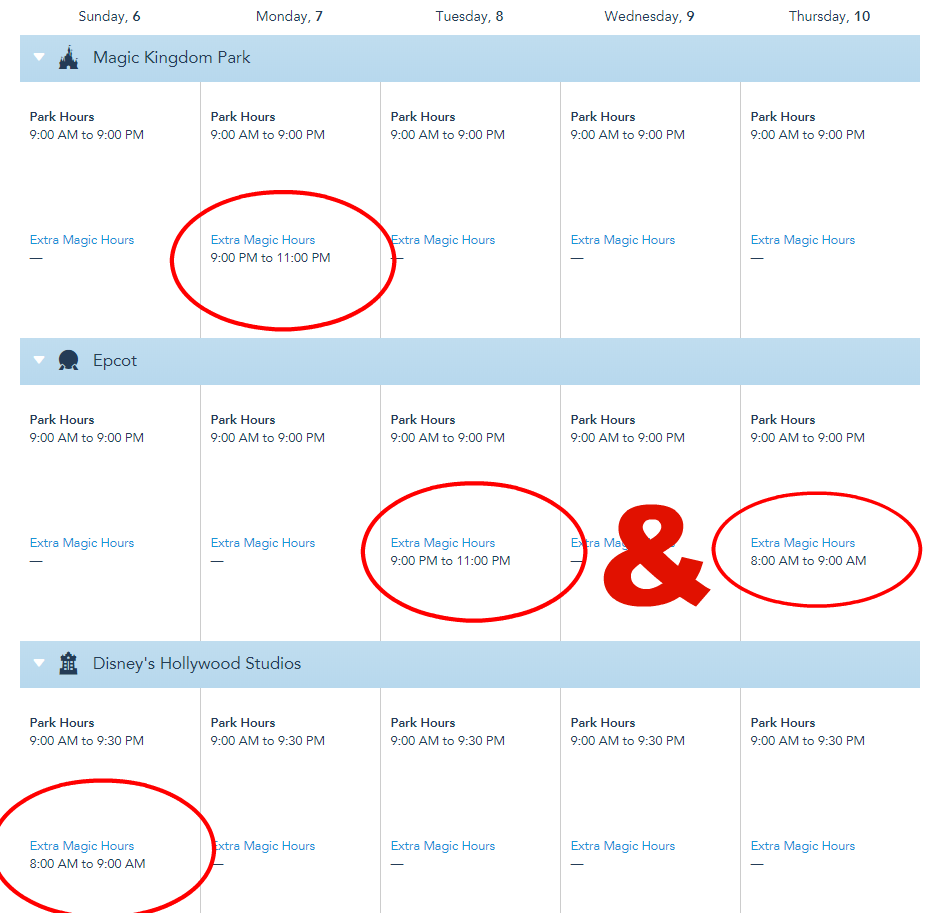 So if we were really going this week we would go to the following parks or areas on these days: 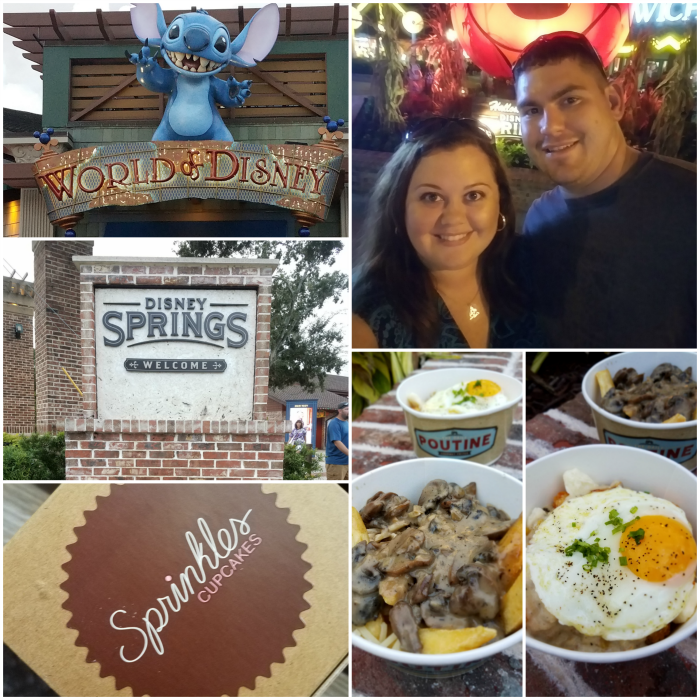 Monday –  Extra Magic Hours are at the Magic Kingdom on Monday from 9 PM – 11 PM — We’d Probably sleep in a little, have breakfast at the hotel and then head over to the Magic Kingdom, staying late after the fireworks to ride even more rides with hardly any crowd!

We only do Animal Kingdom 1/2 a day so we’d probably get a hopper pass for this day and go to Hollywood Studios today too!

Of course add more days or change it up if you want to do the water parks or have more rest days!

Next in the series………

To read more about how pick our Restaurants at Disney for our Disney vacation, check out this post, “Disney Vacation Planning Series: Picking Your Disney World Meals, Snacks and Dining Reservations”. (POST COMING SOON!)