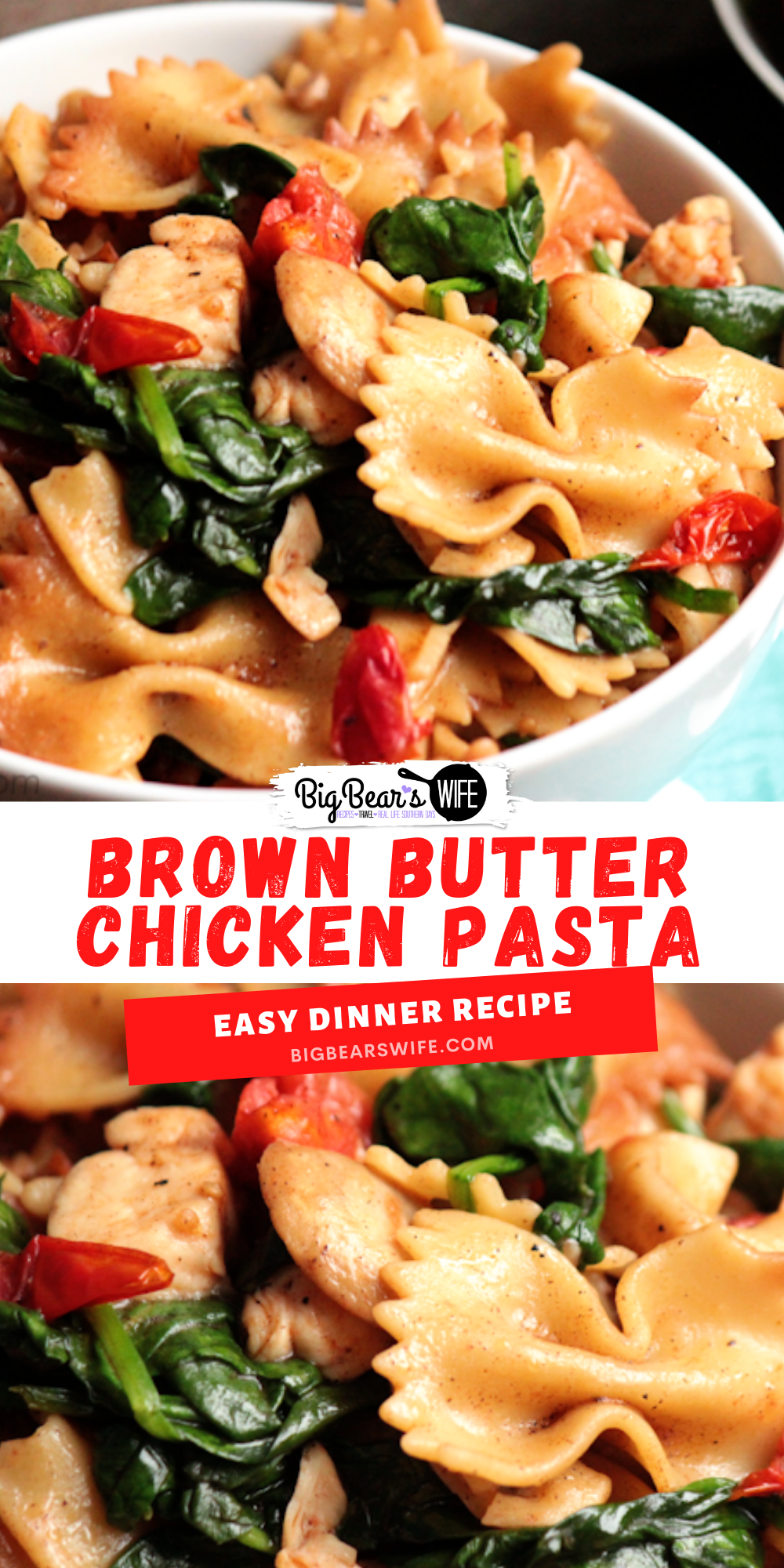 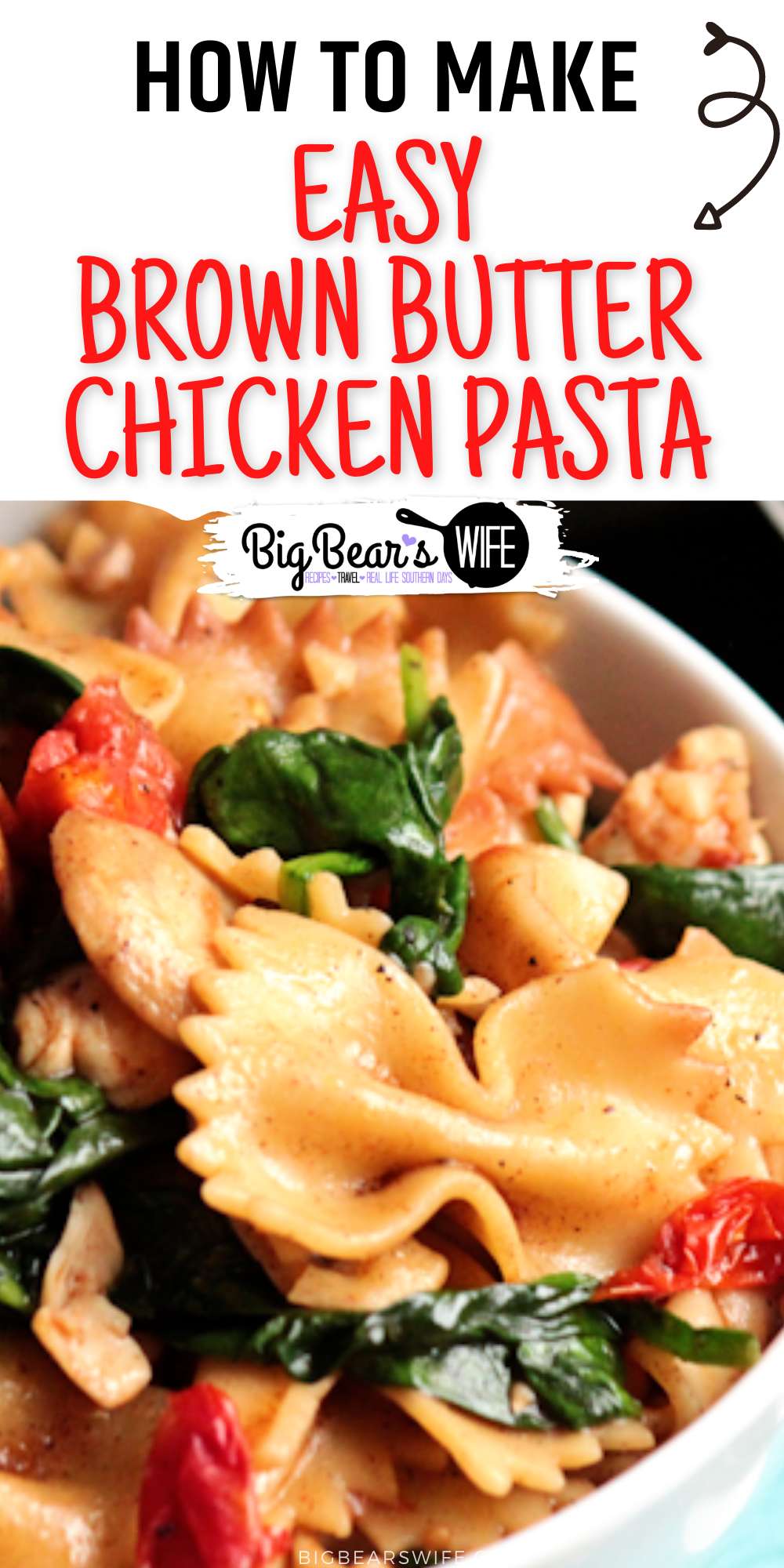 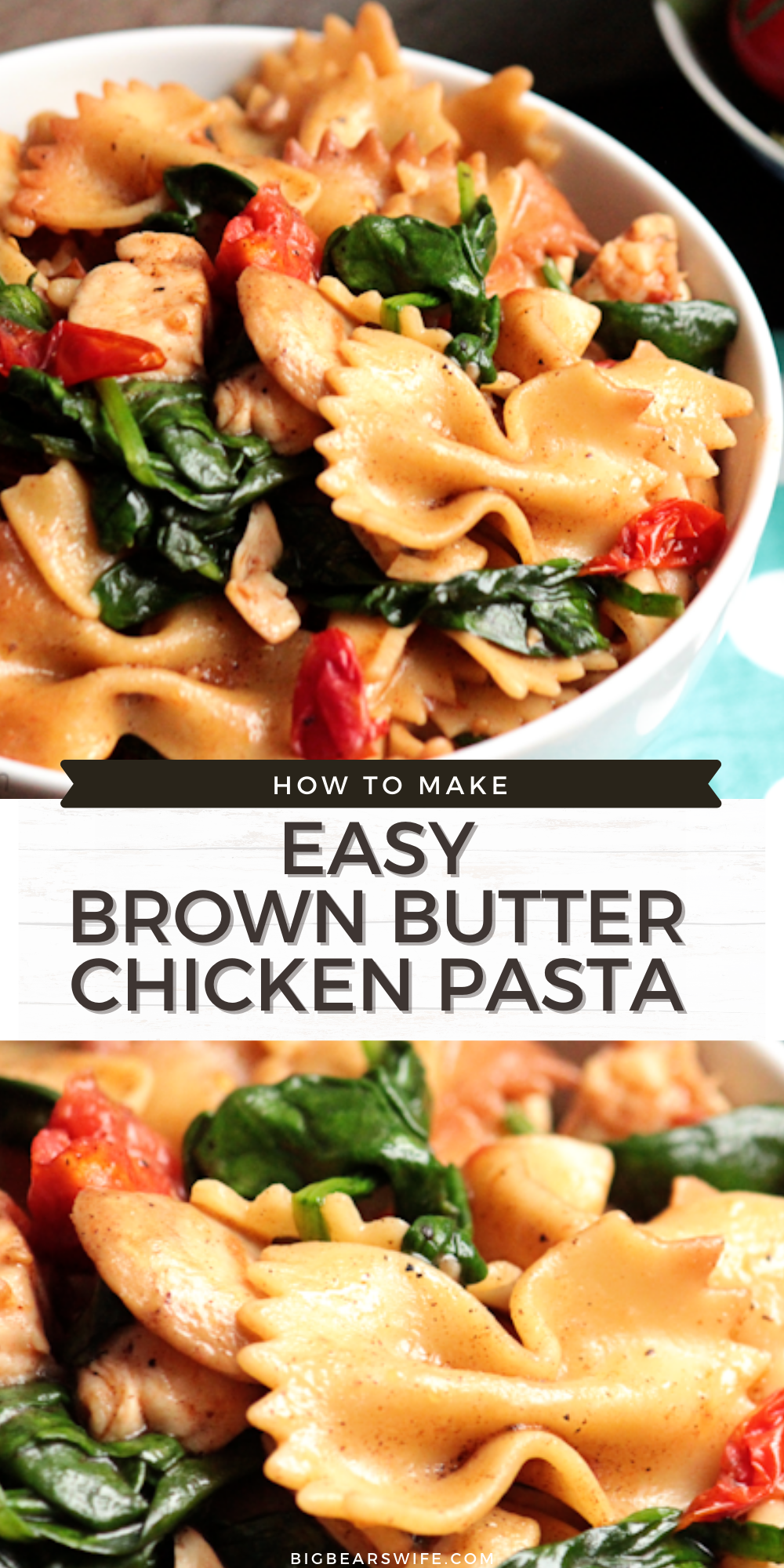 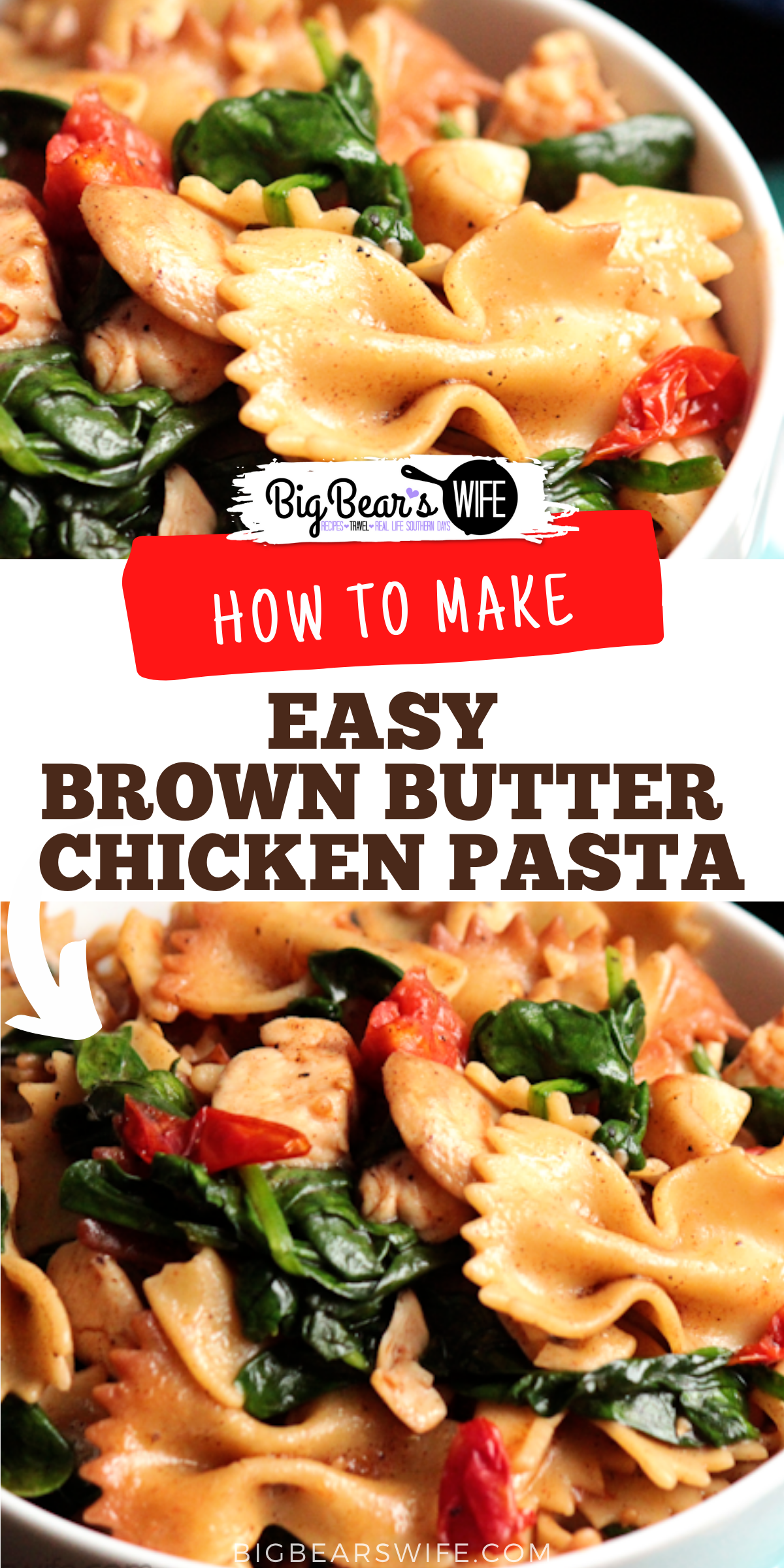 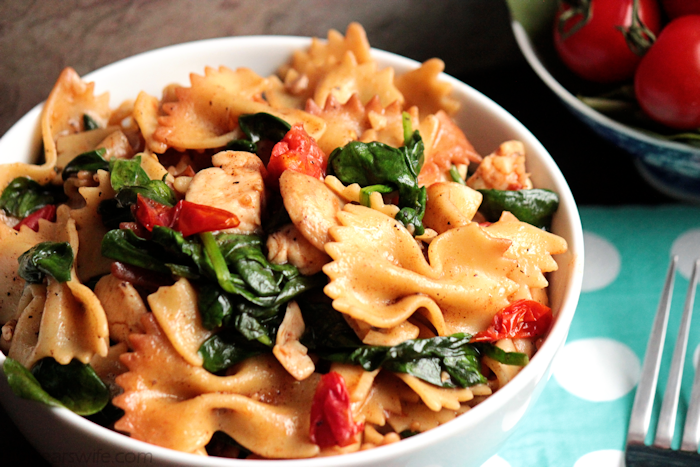 If you’ve been reading along, you might remember that back in November I went to Roanoke and competed in the 2013 Frugal Food Lion Cook Off. I was partnered with Elizabeth from E, Myself and I, and we totally kicked butt and won! Woot Woot!

I was SO nervous about the whole thing, so the night before the event BigBear and I went to Food Lion and I did a little “trial run”. I knew that we had a budget of about $15 but that was all I knew. I figured we would be using the Food Lion ” My Essential” brands too, which is perfect because that’s what I normally buy anyways. 🙂 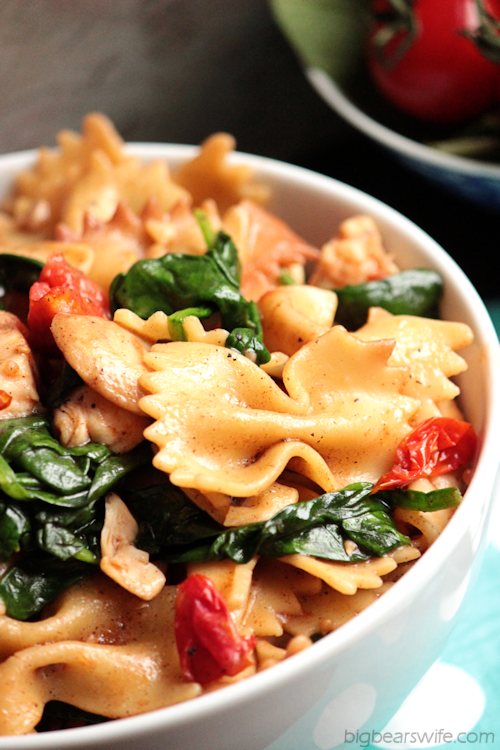 So off we went to our local Food Lion. I grabbed a bunch of things with a small idea in my head and we went home to practice my dish. I set everything out on the counter started a timer for “30 minutes” and just went at it in my kitchen. I felt like I was on “Chopped” haha. I think I finished with 4 minutes left on the clock and I wasn’t really “running around” too much.

So 30 minutes later, this is what I presented to BigBear as my final dish haha. It turned out to be some of the best darn pasta that I’ve ever made. It was so good and we just couldn’t stop eating it! 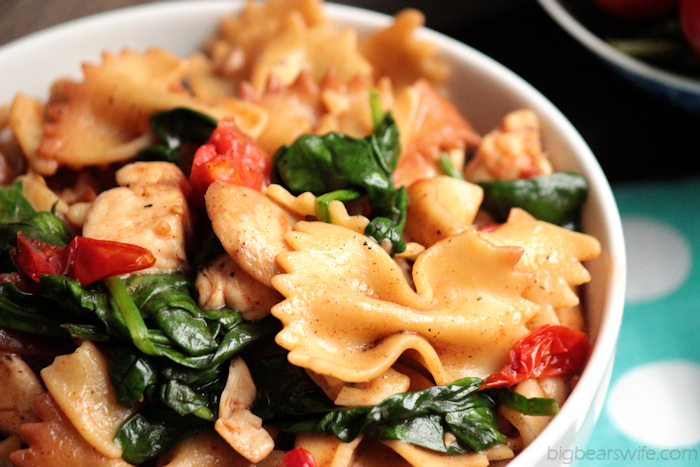 I thought “YES, if they have some of these items then I’ve got this”! Well they did end up having some of the things I used at home for practice but I had made one dish…..at the competition we had to make 3 parts to the meal so… my “practice dish” didn’t make it’s full appearance at the Cook-Off but it gave me some great ideas to incorporate into my winning dish (that I’ll be posting on the blog soon)! 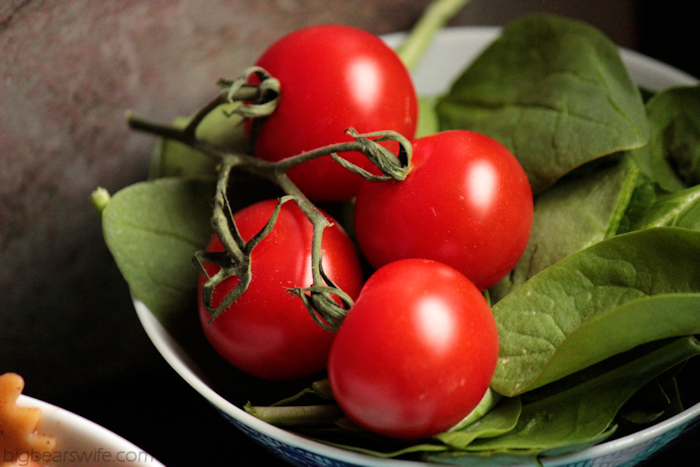 But that didn’t mean that I wanted to just sweep this one under the rug and not tell you about it! No way! It’s too good for that! We had it for dinner last night and BigBear just loves it so much that I had to limit him on how many bowls of it he could eat! I think it’s the brown butter on the pasta; it’s just addictive. I also absolutely love the pops of color that the spinach and tomatoes give to the pasta dish! 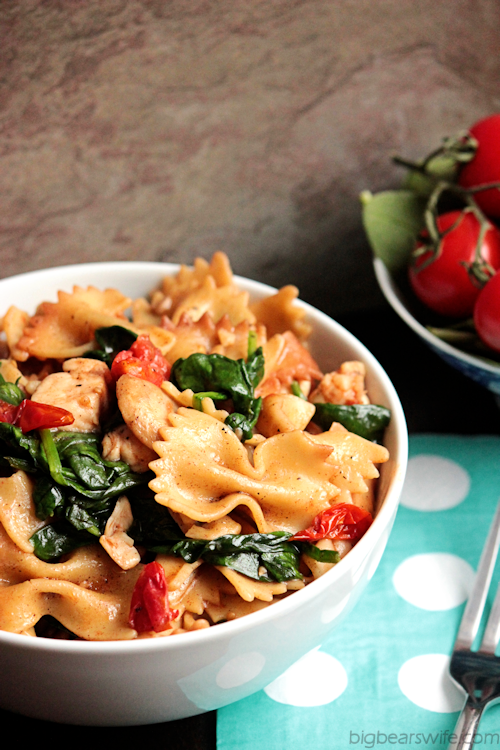 Oh and by the way…. GUESS WHAT I just did!! I just bought my ticket for BlogHerFOOD 2014 in Miami! Ahhhhhhhh I am literally jumping for joy right now! I’ve never been to BlogHer Food and I’ve never been to Miami so double ahhh! Are you going? I’d love to see you there!

oh…and ps… 17 days until we leave for Hawaii! I can’t wait to share that with you! I’ll be sharing tons on twitter and Instagram so make sure you’re following me over there! 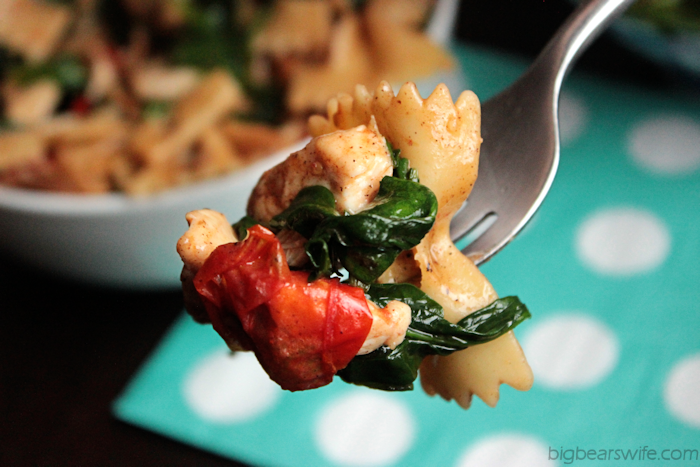 Melt the butter in a large stock pot on medium heat. Once the butter is melted, continue to cook butter until it bubbles and turns a caramel brown color.

Add in chicken broth and stir. Reduce to a simmer.

Simmer until all liquid is absorbed by pasta, stir occasionally.

While the pasta is simmering in the chicken broth, add 1 tablespoon of oil to a skillet and heat on medium to high heat.

Cut chicken into bite size cubes and season with a little soul seasoning, salt and pepper.

Add chicken to the hot skillet and cook until done.

Remove chicken from skillet and set aside, cover with foil to keep warm.

Add the mushrooms and tomatoes to the skillet. Sprinkle with a dash of soul seasoning. Add in the tomatoes and saute until mushrooms are soft.

Once the mushrooms are tender, add in spinach and cook until spinach has wilted.

Once all of the chicken broth has been absorbed into pasta, toss the mushrooms, tomatoes and chicken into the pot with the pasta. Add in the chicken and stir well to combine everything. Sprinkle with Parmesan Cheese and serve! 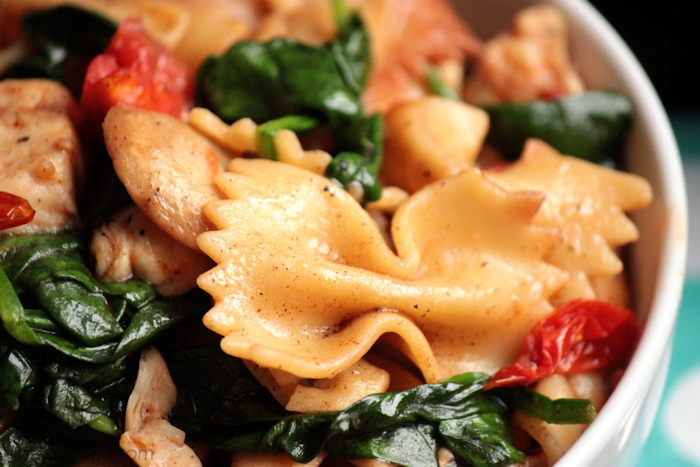 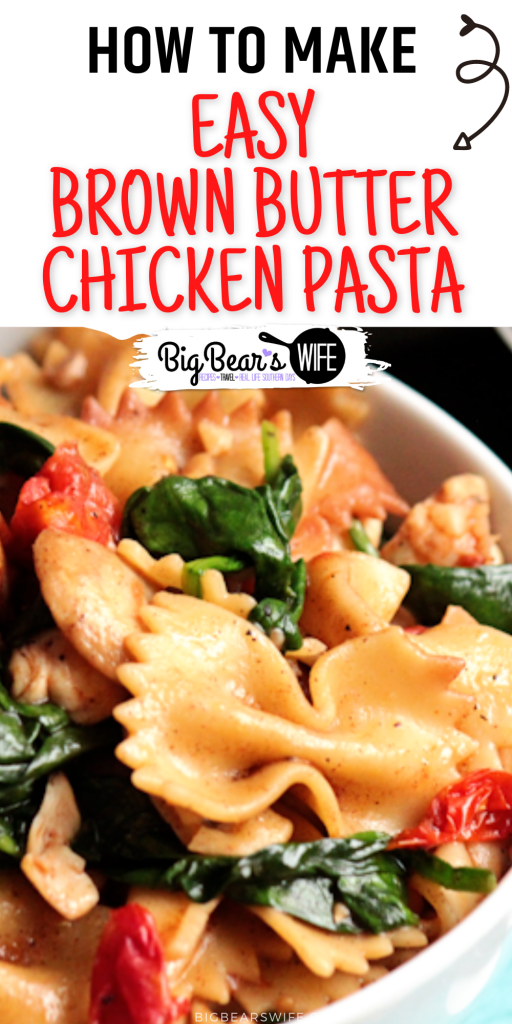