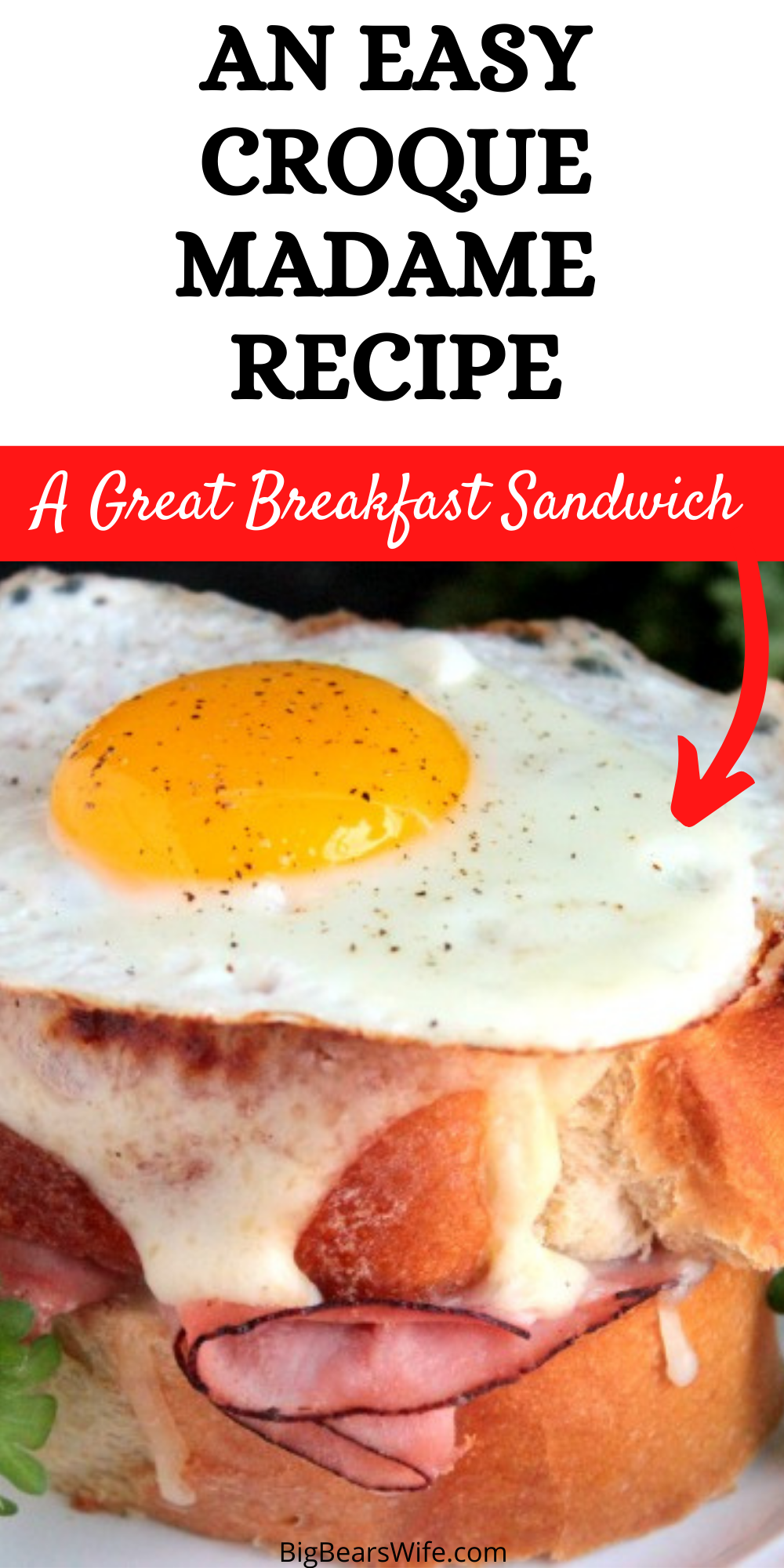 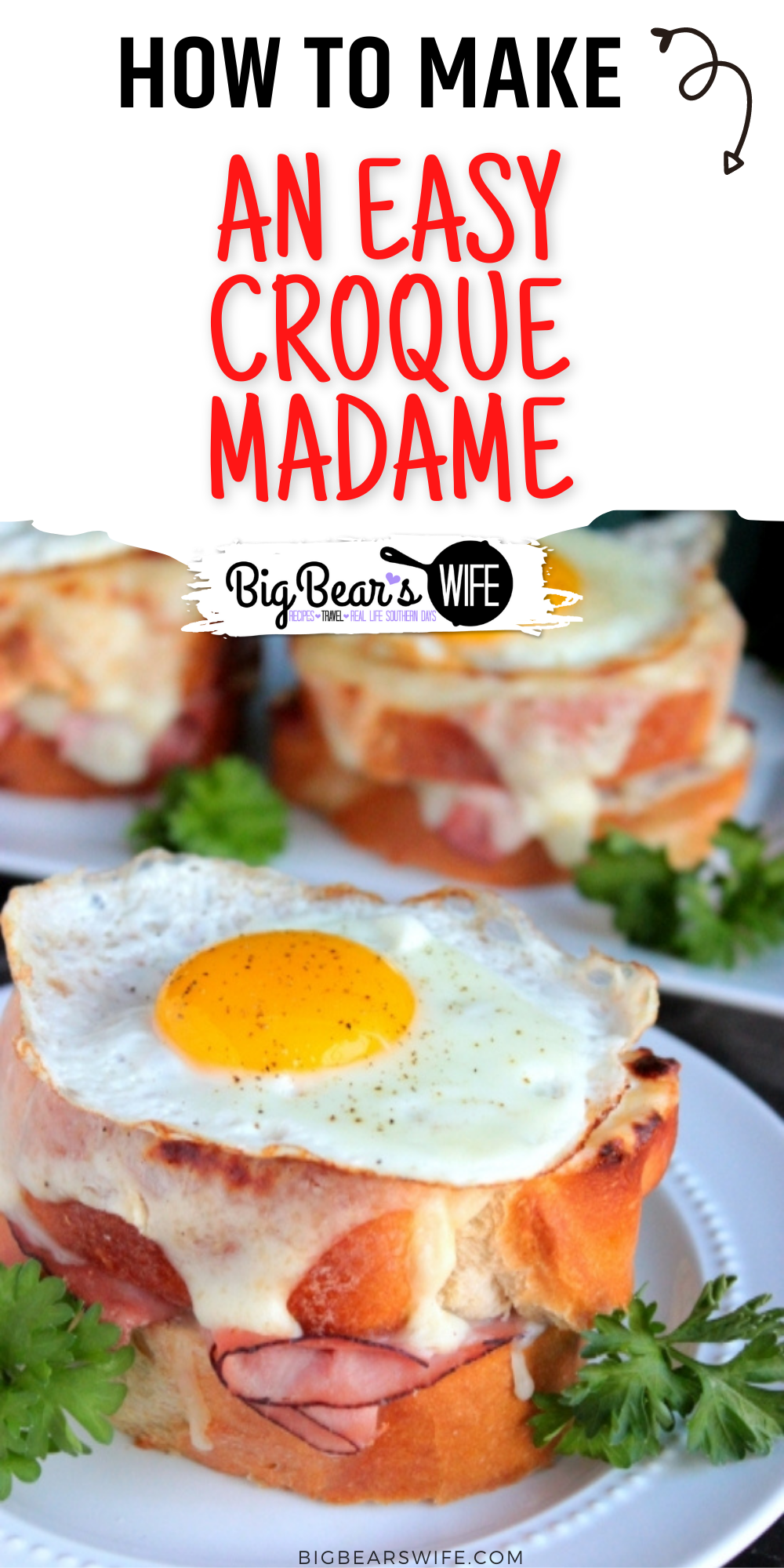 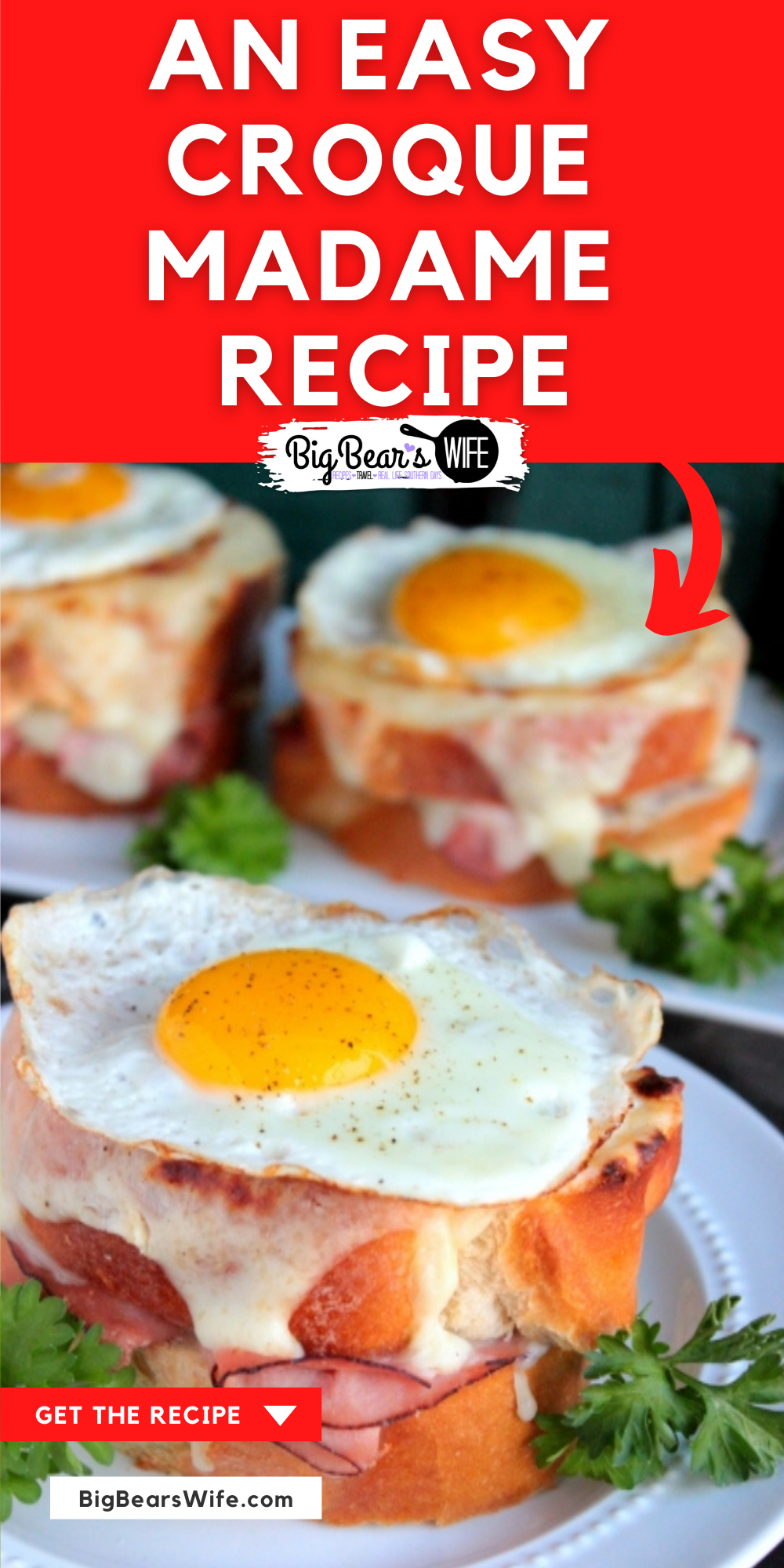 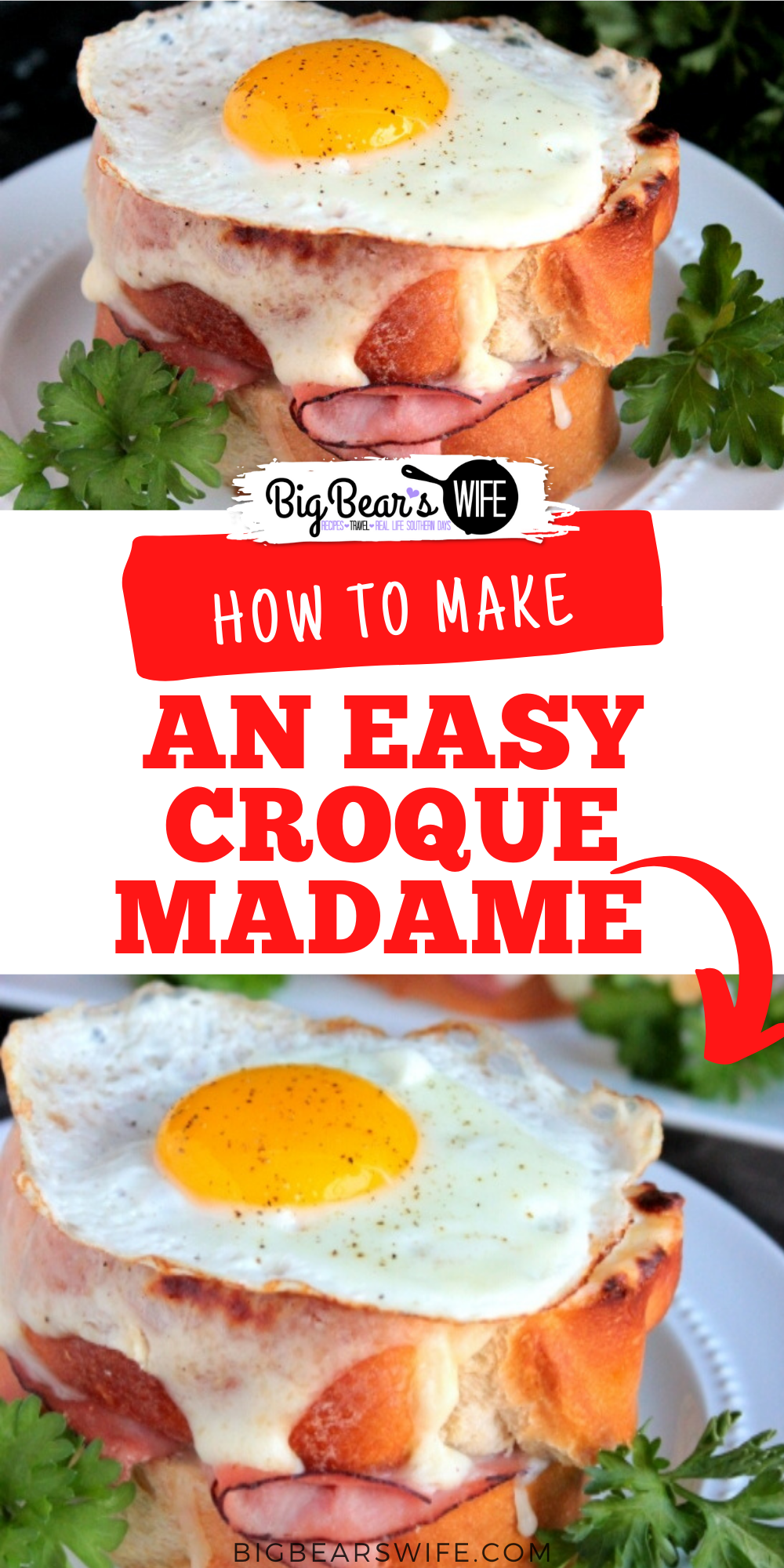 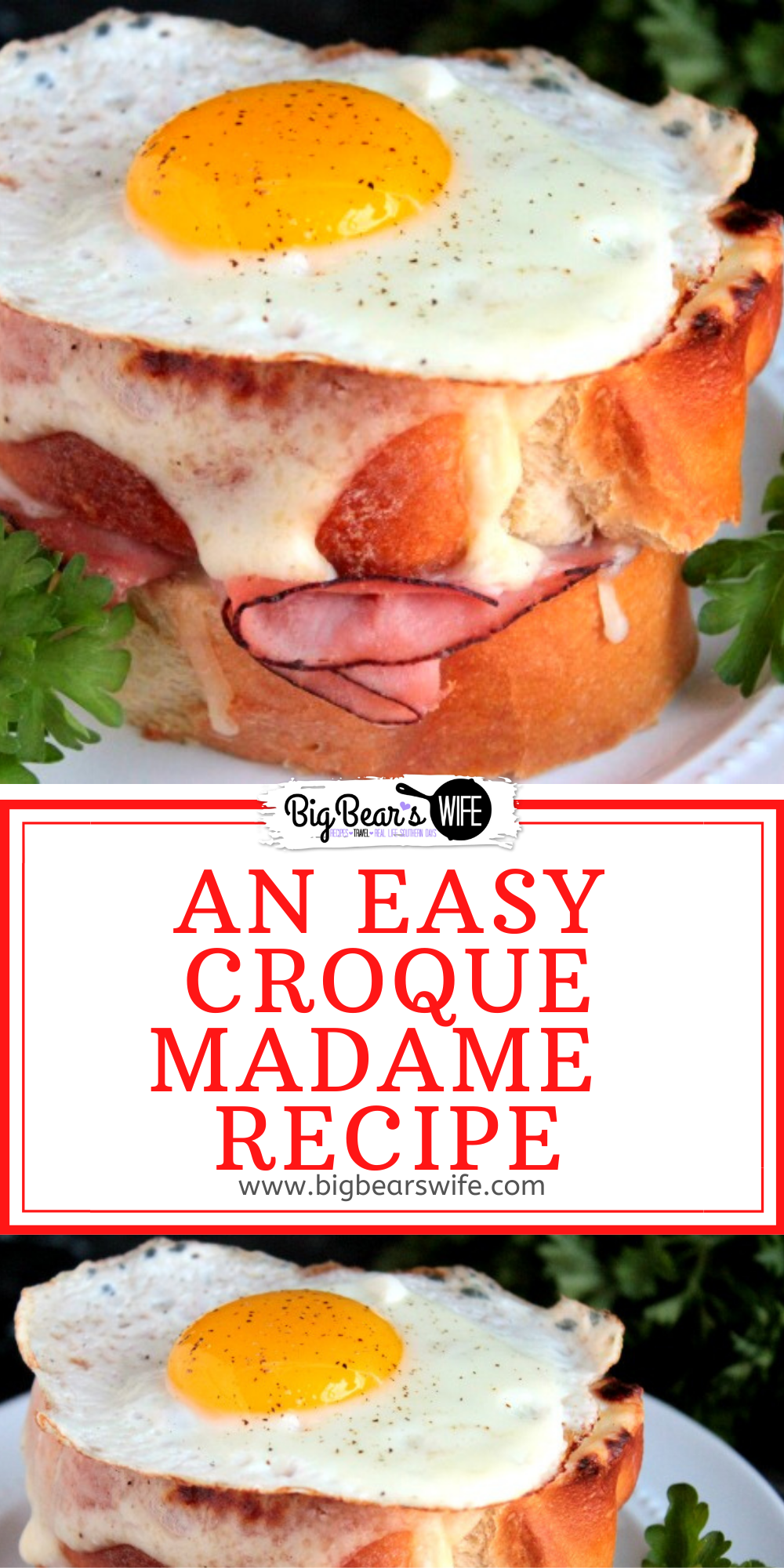 A perfectly made Croque Madame is a toasted ham and cheese sandwich with a cheesy Bechamel Sauce and a fried egg resting on top! The perfect breakfast sandwich. 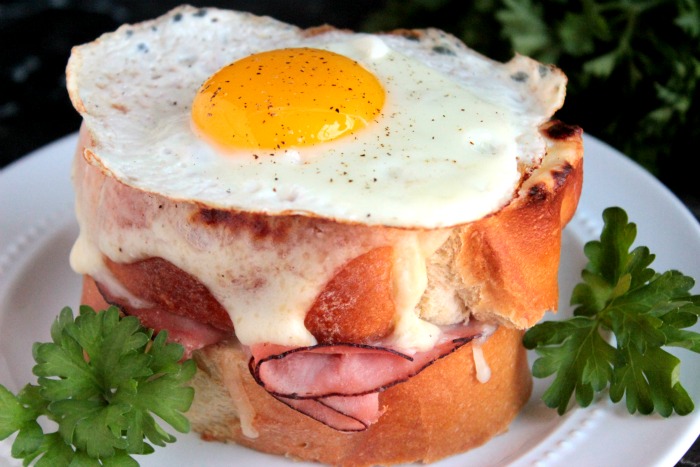 Everyone is out clearing the shelves at our grocery stores because we’re suppose to get some snow this weekend. I had plans to go to the grocery store yesterday evening before I even knew about the weather this weekend.

I wish I had planned better and went earlier. I suppose that it wasn’t so bad, but people sure do go crazy when snowflakes start falling. Snow started yesterday around 4, right before I got off work. Oh, but by the way people were driving you would have thought that a full on blizzard had just been dumped on us. haha.

It was pretty snow. It was melting as soon as it hit the road, so it was fluffy rain. However, you know we’re in the south and everyone panics when they hear the S word.

If snowflake are falling you better believe that people around here are driving like it’s their first day behind the wheel of a car and they’re running out to the store to buy all of the milk, eggs and bread.

However, you know we’re in the south. Everyone panics when they hear the S word. If snowflake are falling you better believe that people around here are driving like it’s their first day behind the wheel of a car. They are also going to be running out to the store to buy all of the milk, eggs and bread. 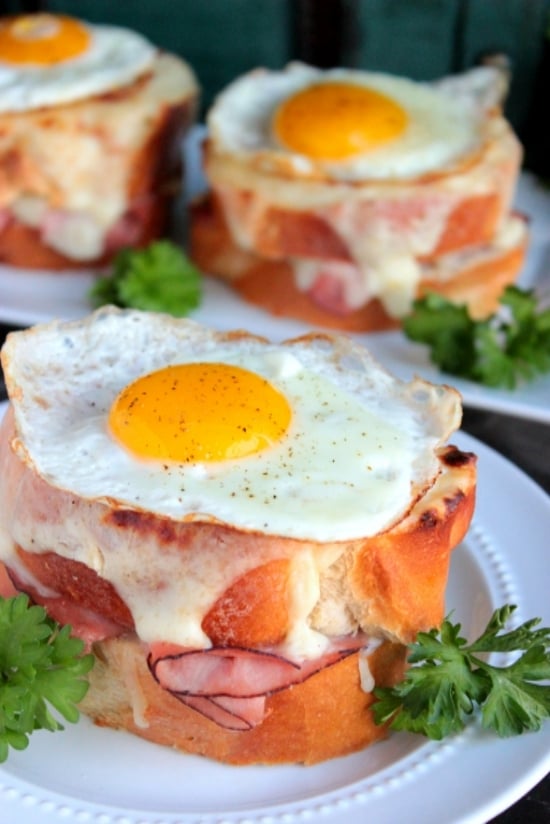 There are two reasons that I’ve never understood why people go crazy with buying milk, eggs and bread when it’s going to snow haha.

#1. Do you really going to survive on milk, eggs and bread if you’re snowed in? I always imagine that people are this items because they want to live off of french toast when it snows. haha 😉

#2. If you really think it’s going to snow that bad, why are you buying food that needs to be refrigerated? If the storm is going to be THAT bad it’s a possibility that your power might go out. soooo milk and eggs + no power… haha 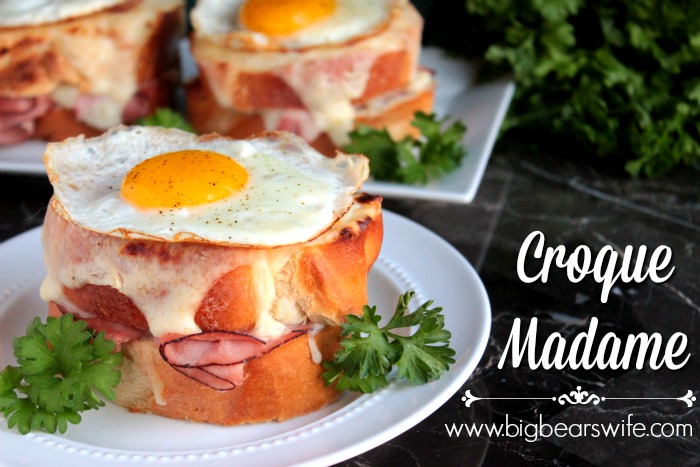 Even though I envision people making french toast for days when they’re stocking up on milk, bread and eggs, let me give you another idea for your snow day groceries! Let me introduce you to the Croque Madame!

Now some of you have probably already met a Croque Madame. Perhaps you’ve had a Croque Monsieur before.

They’re almost the same and they’re both equally delicious. The Croque Madame is a Croque Monsieur with a fried egg on top.

Toss an egg on top of that perfect ham and cheese sandwich and you’ve got yourself the perfect Croque Madame. 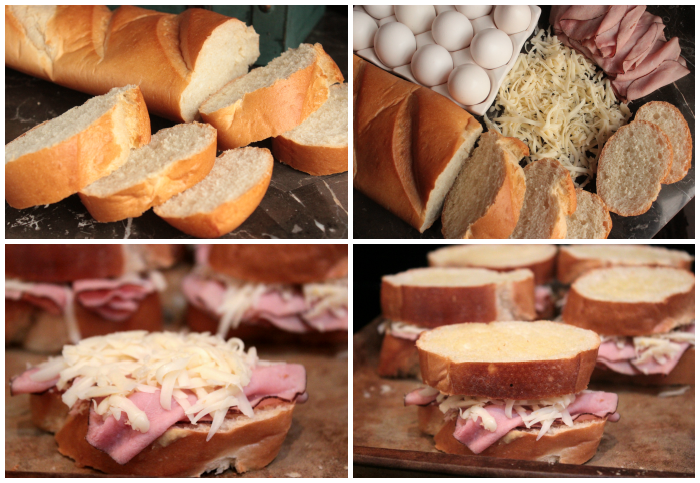 For this Croque Madame you’ll need to pick up a few things. a load of french bread, I mean you can use regular bread for these but I love how thick they are when I use a loaf bread like french bread or a loaf of Italian bread.  You’ll also want to grab some thin slices of ham, a bit of shredded Swiss cheese, some Dijon mustard and the items to make the Bechamel Sauce. I’ve got everything listed below for you so don’t worry.

I’ve got everything listed below for you so don’t worry.

Oh also, I know that “Bechamel Sauce” might sound hard to some but don’t worry, it’s really  easy to make. 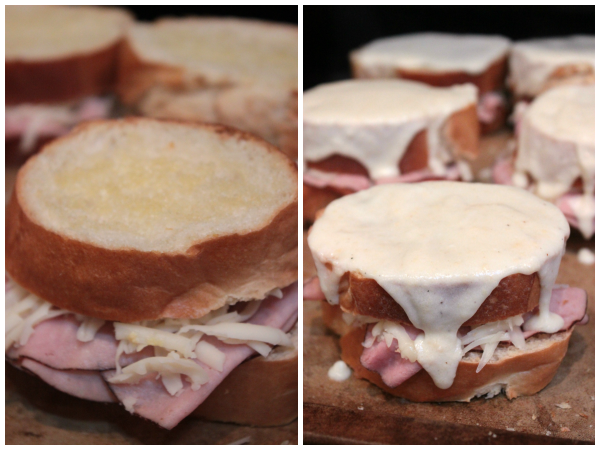 Once you’ve got your sandwiches assembled per the directions below you’re going to want to spoon that homemade bechamel sauce over them and pop them into the oven under the broiler.

Once they’re under the broiler they’ll toast up nicely and the cheesy bechamel sauce will get nice and brown and bubbly. 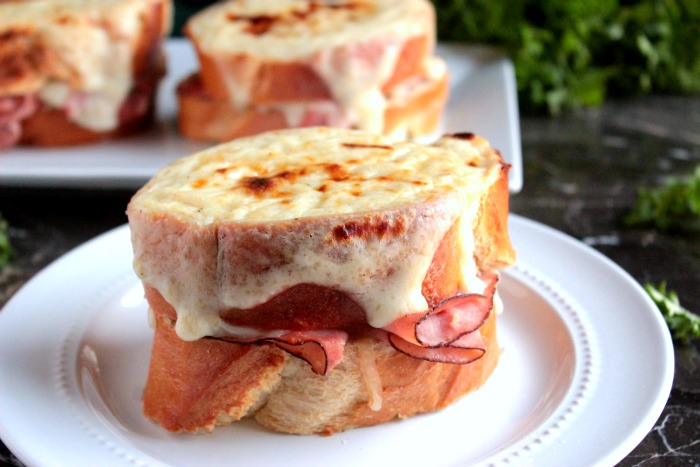 For the egg part of the Croque Madame I’ll let you decide on when you want to make those. 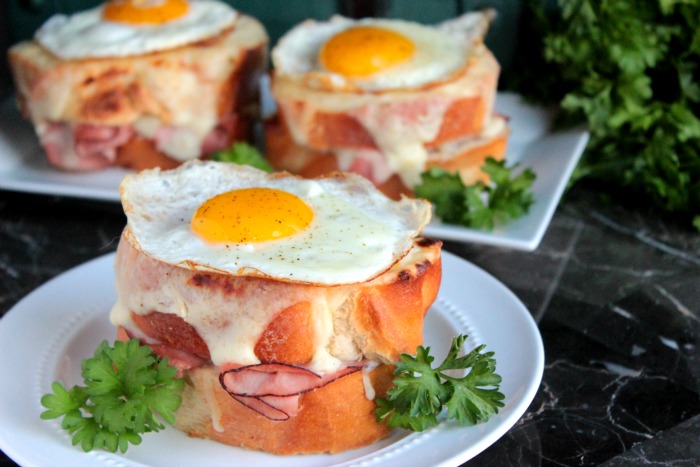 However, depending on how many eggs you’re making, you might want to broil the sandwiches and then make the eggs to finish the Croque Madame.

I’ll leave that up to you. 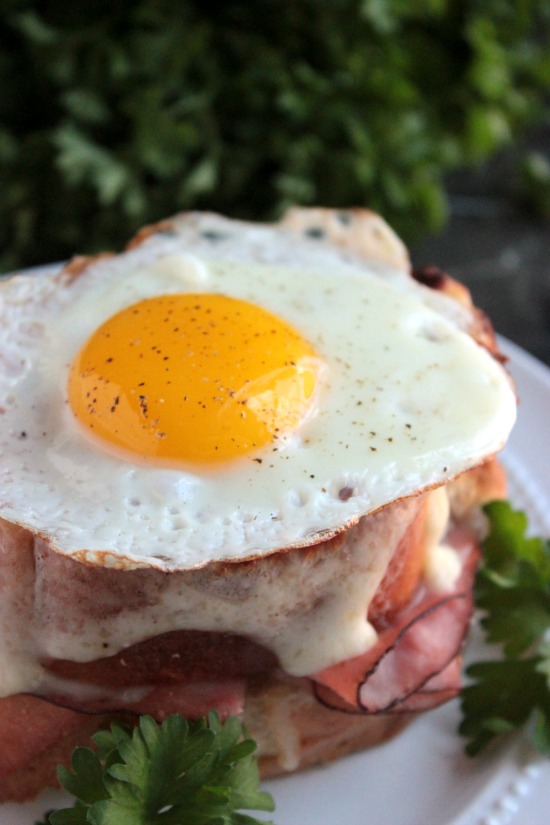 I like to cook my eggs for the Croque Madame just until the whites are solid and the yolk is still a little runny. I tend to always eat a Croque Madame with a knife and fork.

Instead of just picking it up and eating it like a normal sandwich so I love the egg like that when I slice into it.

If you’re not a fan of a runny yolk just cook your eggs for a wee bit longer.  I normally cook them for about 4 minutes, untouched, in a hot skillet with a tad of butter and a sprinkle of pepper.

Need some help in the fried egg department? Check this out. 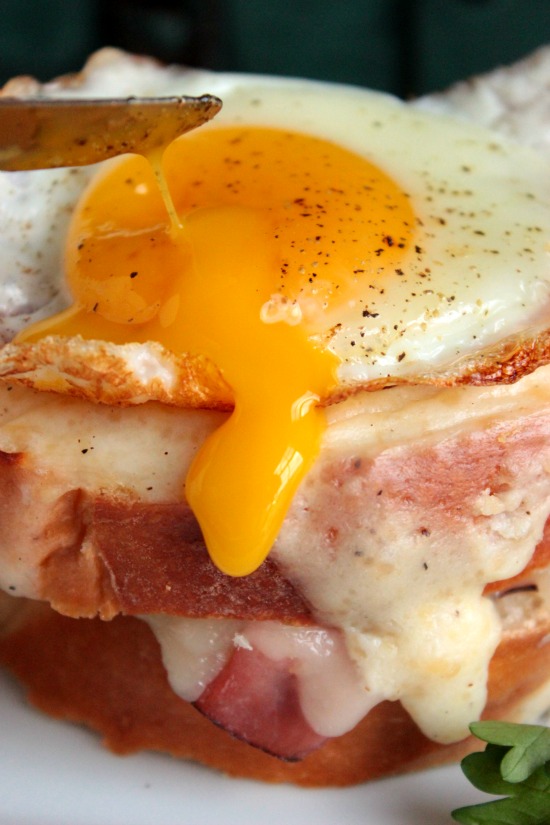 Oh and here’s a little trick that I like to use when I’m trying to get that “Perfect Looking” fried egg. Crack your egg into a ramekin instead of directly into the pan. Slowly pour a little of the egg white first without dumping the whole egg at once. 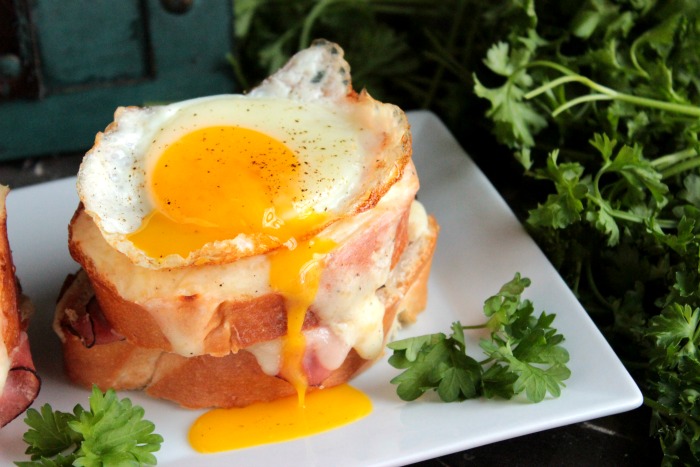 I don’t normally want snow on the roads but I have to admit that I kind of want a little bit. I need to be “snowed in” a bit this weekend. Maybe then I’ll get a little bit of rest.

haha Who am I kidding? We all know that if I get snowed in I’ll be working on recipes and blog stuff all weekend. I can live with that. 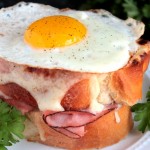