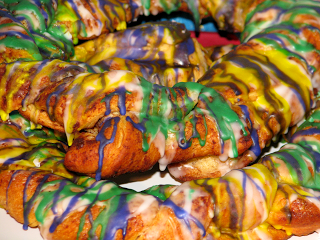 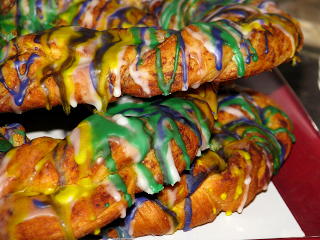 or in English…..Let the Good Times Roll! 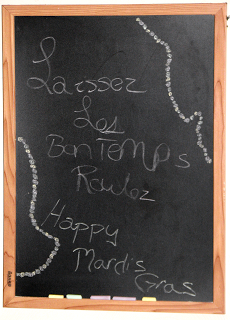 🙂 I love Mardi Gras. I’ve been to New Orleans twice for Mardi Gras and I loved all of the Parades, Shops and People there!

I didn’t get to go this year, BUT I did Make a King Cake this year.

Ok, I didn’t have time to make a traditional king cake but I did make a short-cut one 😉

Also… no Plastic baby or Coffee Bean In this King Cake but Just cause I didn’t have one.

Maybe you’re wondering what a king cake is…

Here is a blurb from Wikipedia on the King Cake:

The king cake of the New Orleans Mardi Gras tradition comes in a number of styles. The most simple, said to be the most traditional, is a ring of twisted bread similar to that used in brioche topped with icing or sugar, usually colored purple, green, and gold (the traditional Mardi Gras colors) with food coloring. New Orleans king cakes are traditionally deep-fat-fried as a doughnut would be, and there are many variants, some in more recent years featuring a filling – the most common being cream cheese, praline, cinnamon, or strawberry.

It has become customary in the New Orleans culture that whoever finds the trinket must provide the next king cake or host the next Mardi Gras party. 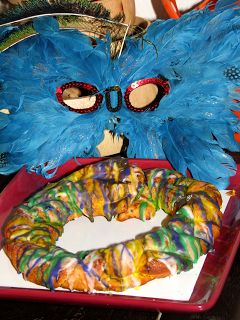 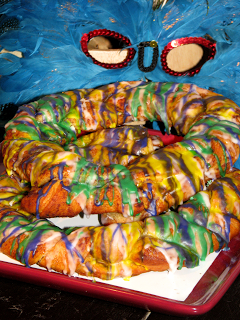 SO here is my Easy Short-Cut King Cake

Braid the 3 ropes and to 1 strand. Loop it into a circle and place it on your baking sheet.

Brush the rope circle with melted butter and sprinkle with cinnamon and sugar.

Take out o oven and let cool on a cooling rack.

Meanwhile, mix powdered sugar and icing in a mixing bowl until it turns into icing. The Icing should drizzle well but not be thick nor watery.

Add More Powdered Sugar if to Thin or add more water if to thick.

Tint one bowl of Icing with Yellow Food Coloring.

Tint one bowl of Icing with Green Food Coloring.

Tint one bowl of Icing with Purple Food Coloring.

And leave the 4th bowl of icing plain.

Place a paper towel under your cooling racks to catch the icing once you start to decorate the cakes.

Once the cakes are cooled, Drizzle the cake the white icing. I used a spoon to drizzle lines of white icing over the cakes.

Next Drizzle your yellow icing on the cakes, next drizzle the green icing and then drizzle to purple icing.

Let Dry for about 10 minutes. 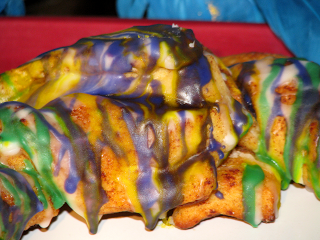 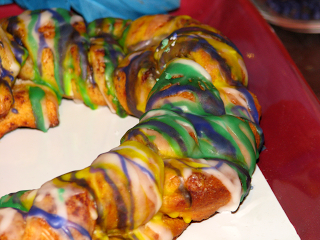