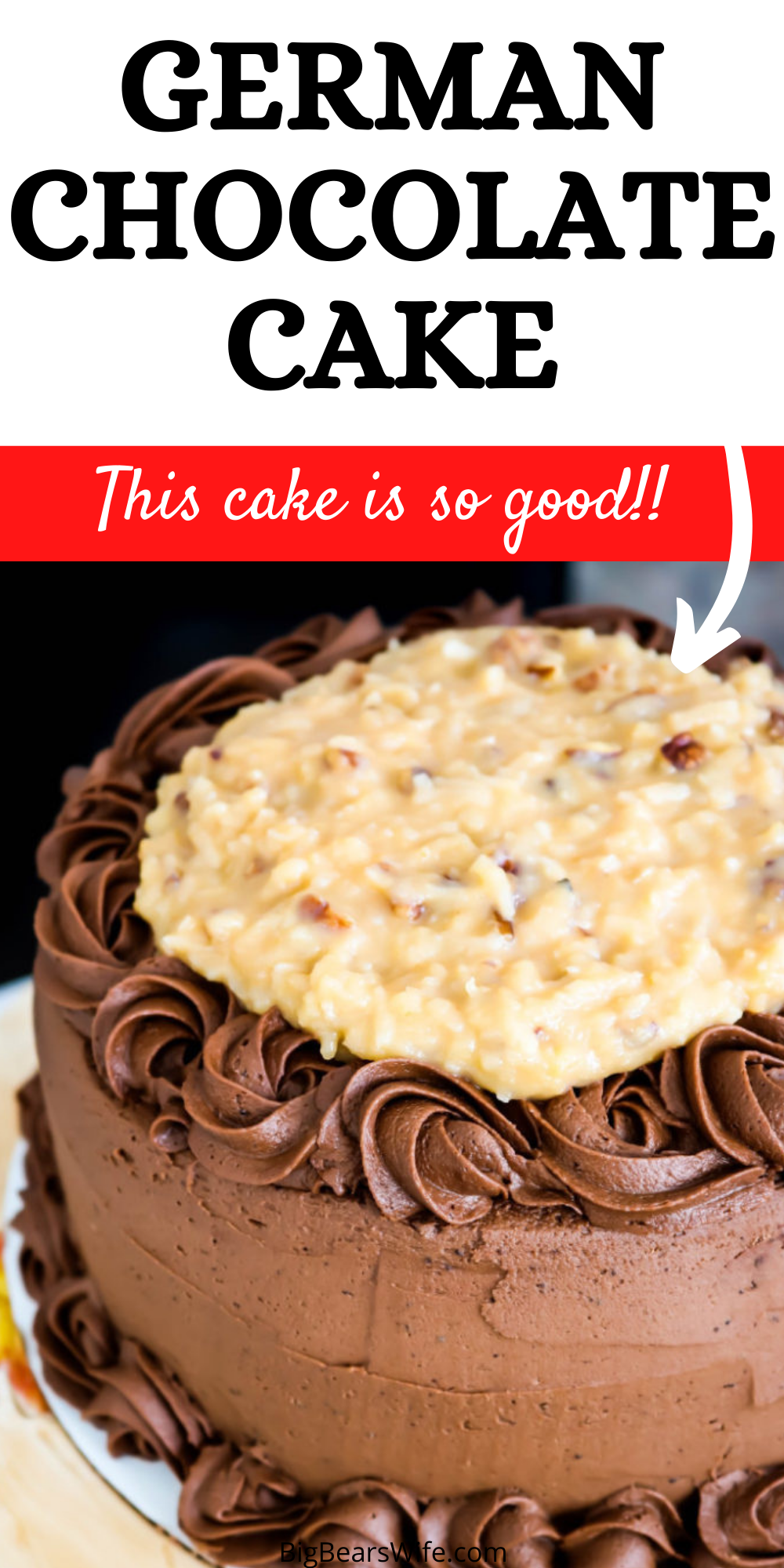 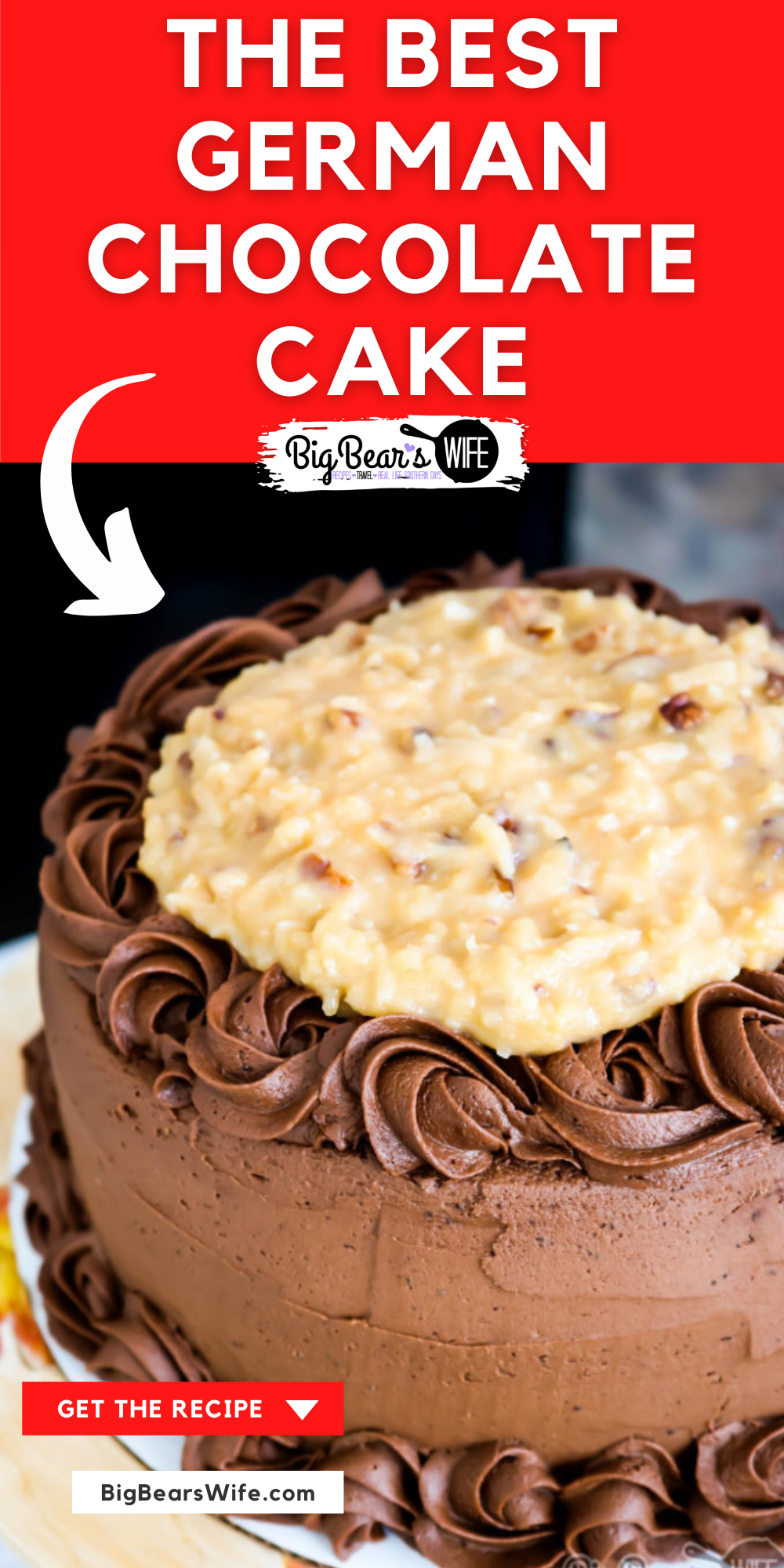 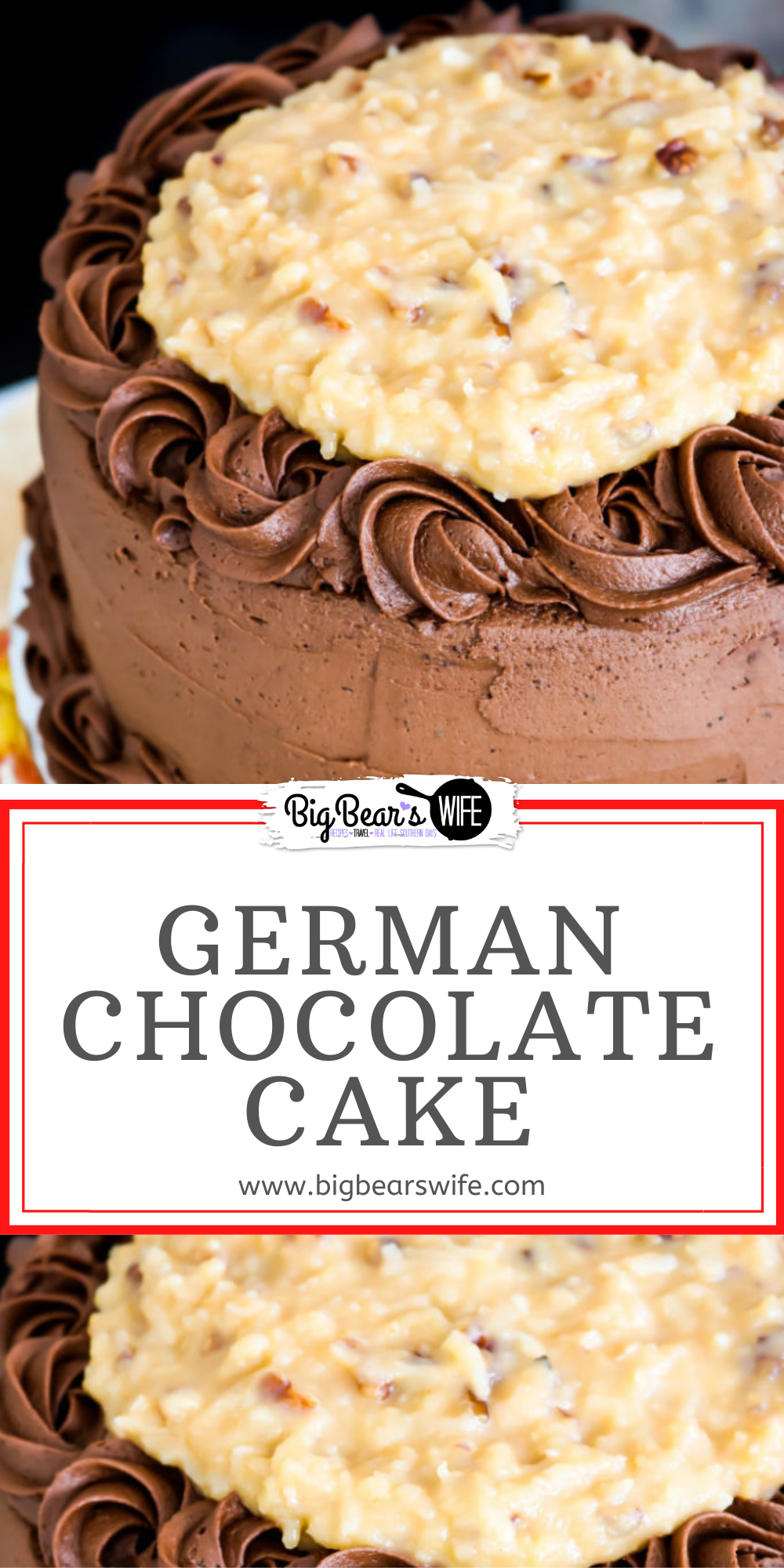 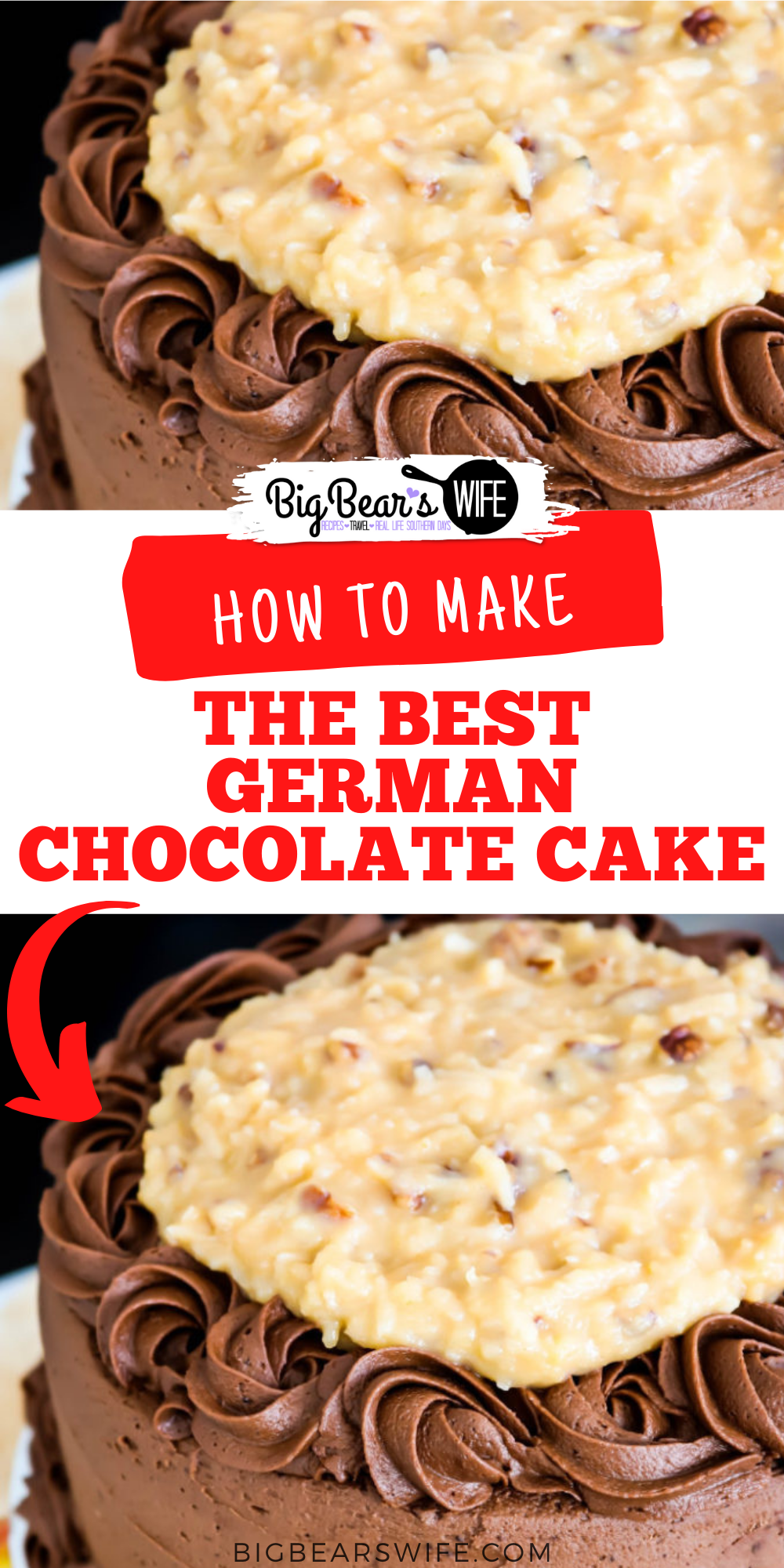 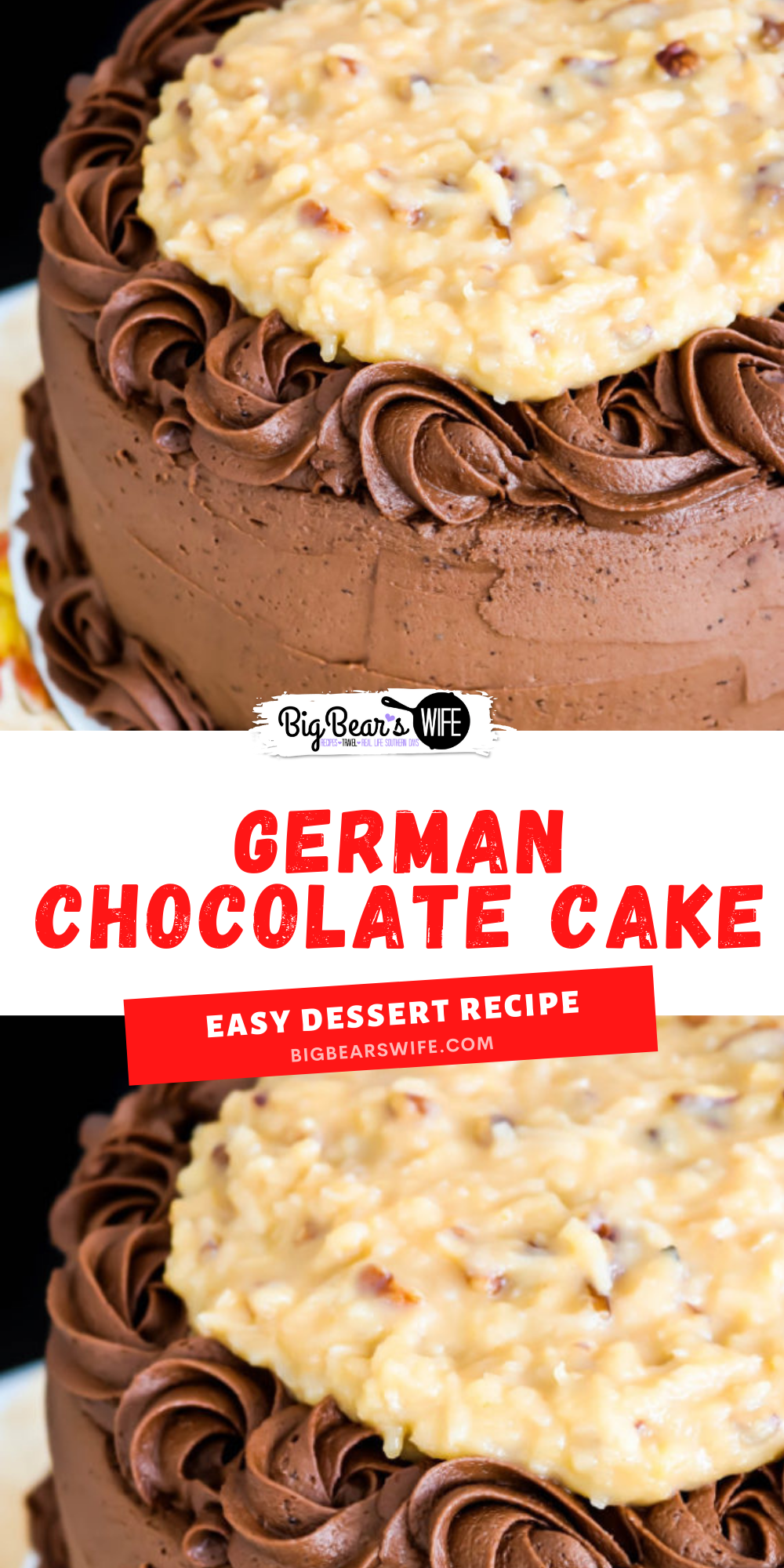 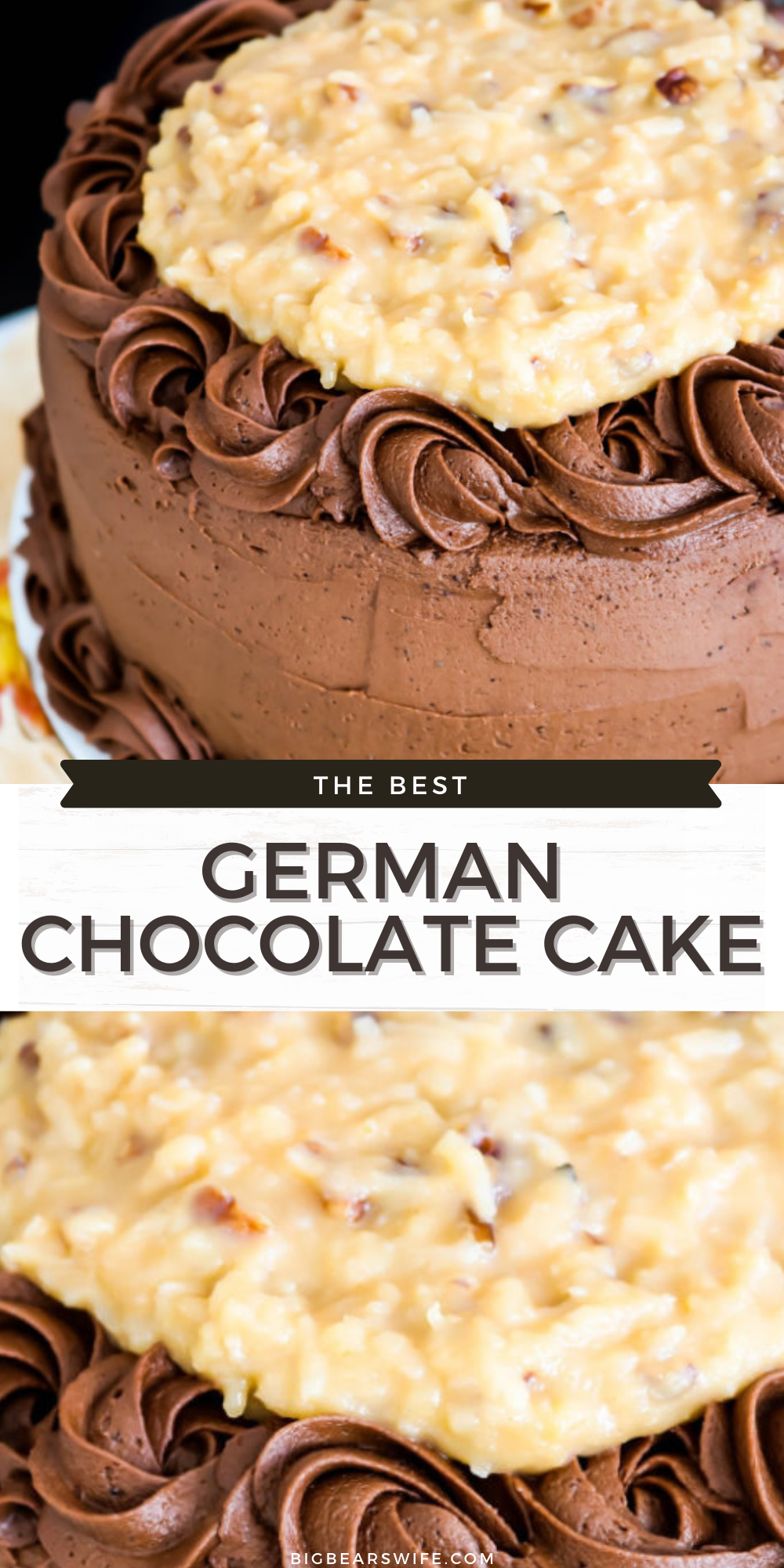 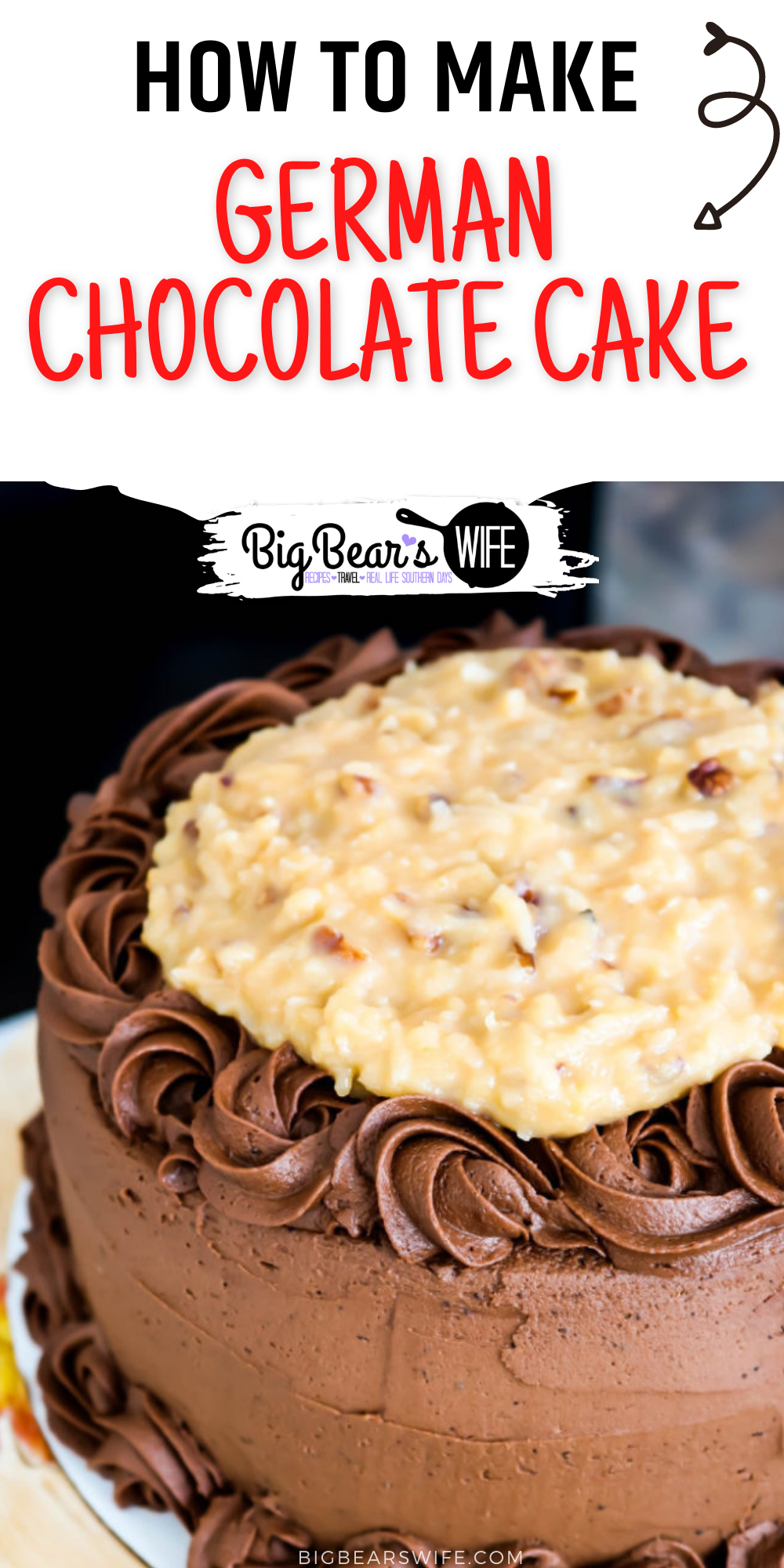 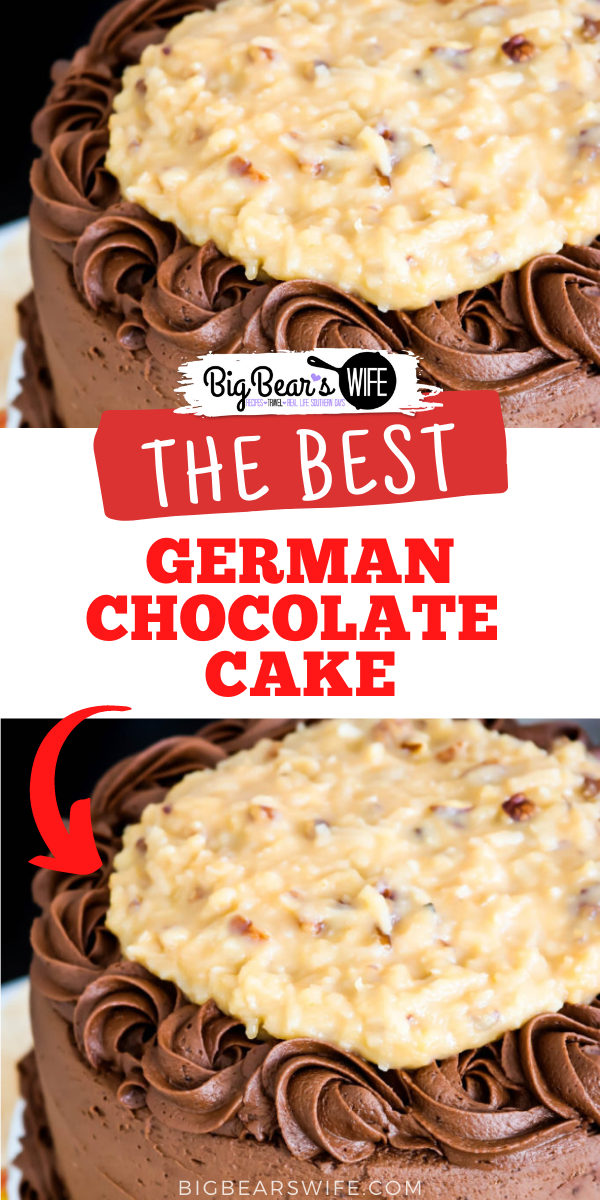 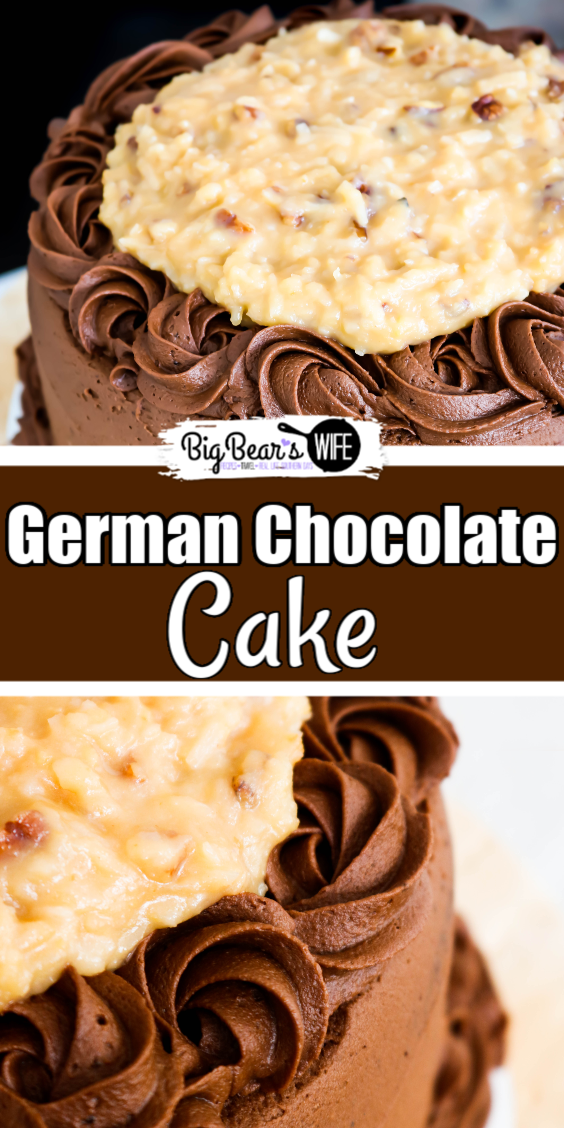 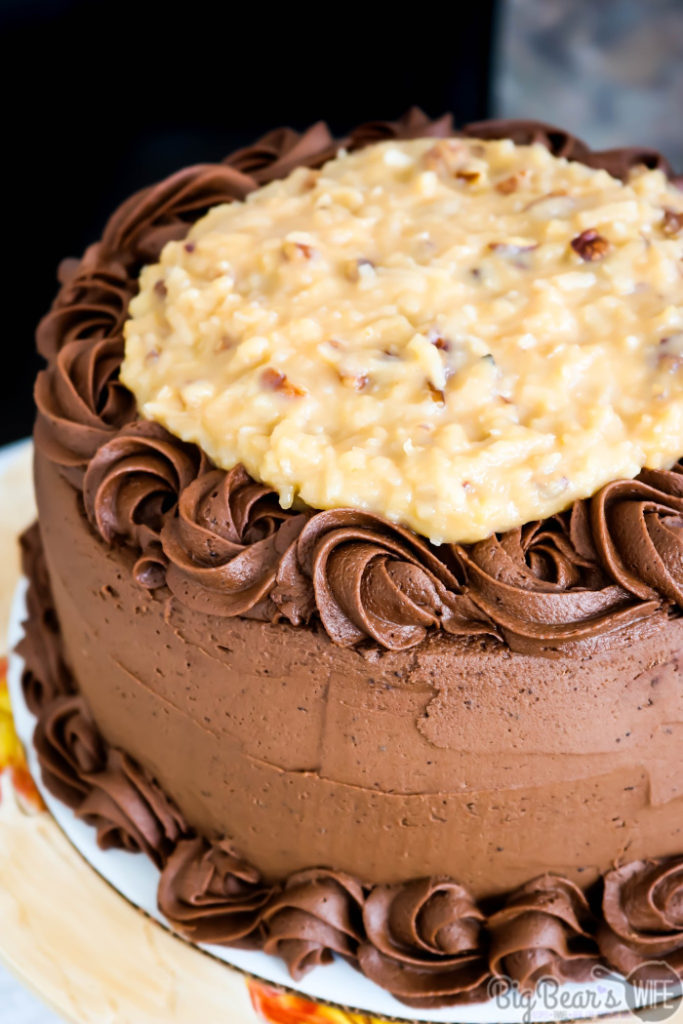 My dad loves German Chocolate Cake and I make him at least one every year and that’s normally for his birthday! This cake is wonderful and packed with tons of chocolate goodness and topped with a fantastic homemade pecan coconut filling that’s just out of this world good!

A lot of y’all love my German Chocolate Cupcakes so I wanted to share with you how I turn that loved recipe into a 3 layered cake that’s perfect for holidays, celebrations and Mondays!

This cake here has everything made from scratch – The cake, frosting and filling. If you find that too overwhelming, try it with a boxed cake mix or canned frosting to help with some of the work. 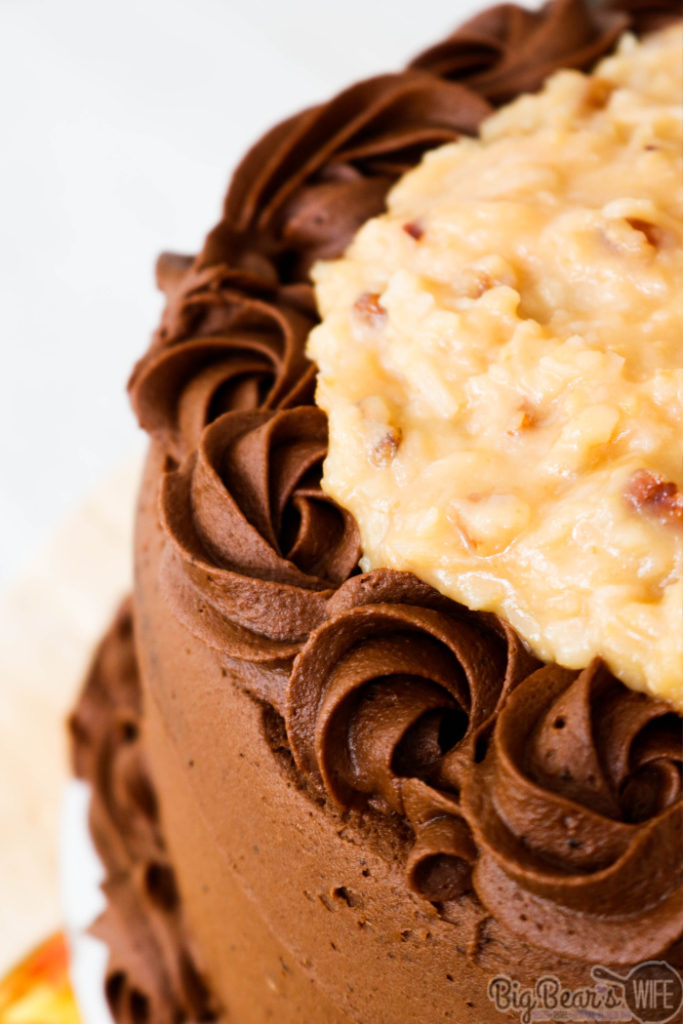 Where did German Chocolate Cake get its name?

You would think that from the name that this cake was German!

It’s not. I know, I’m kinda side eyeing that name too.

So while the concept of German chocolate cake is super popular, it really isn’t that old of a recipe or idea! 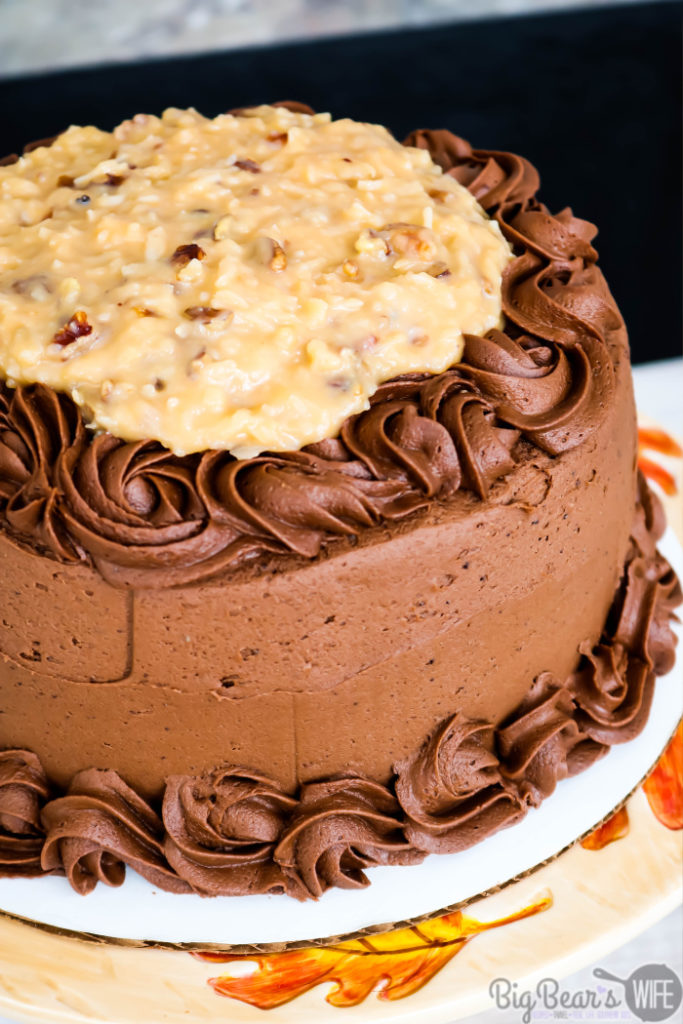 I don’t know what Mrs. Clay’s original recipe was but this is my take on the classic German Chocolate cake!

Love Chocolate and Coconut? Here are more  Recipes to make:

Once cooled, level the cakes if needed by carefully cutting off the rounded tops to make a flat surface. Stack them onto a cake board, adding a layer of chocolate frosting in between each layer.

You can also make extra filling and add a bit between the layers as well.

Frost the cake with a crumb coat and place into the fridge for 1 hour. Crumb Coat just makes, spreading icing all over the cake, gently smooth it out but it doesn't need to be perfect. This is just your base coat.

Remove cake from fridge. Finishing frosting the cake and decorate with details.

I piped a boarder around the top and bottom with a large star tip and then filled the top with the pecan coconut filling. 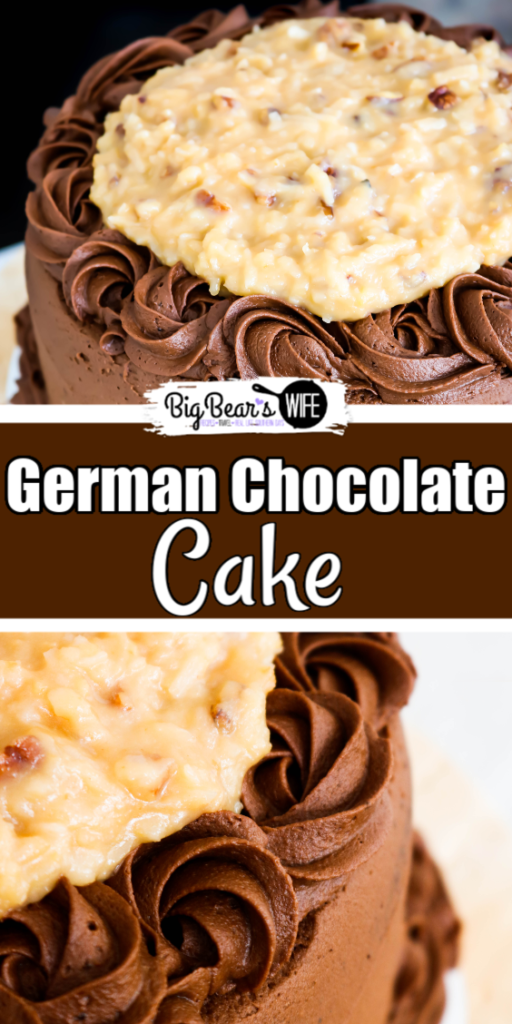