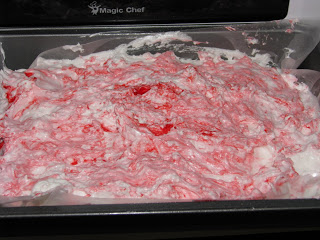 First I’d like to start off with a big *smack* to the forehead. I cant believe that I didnt take a picture of these after I cut them into little squares. BUT they were sooo good and super easy to make. They were heavenly mixed into hot chocolate. So anyways. Here is the recipe. try it and let me know what you think! Recipe from http://www.marthastewart.com/

Coat the parchment with cooking spray, and set pan aside.

Meanwhile, sprinkle gelatin over 3/4 cup water in a heatproof bowl; let stand 5 minutes to soften. Set the bowl with the gelatin mixture over a pan of simmering water; whisk constantly until gelatin is dissolved.
Remove from heat, and stir in extract; set aside.

Beat egg whites in the bowl of an electric mixer fitted with the whisk attachment until stiff (but not dry) peaks form. Whisk gelatin mixture into sugar mixture; with mixer running, gradually add to egg whites.
Mix on high speed until very thick, 12 to 15 minutes.