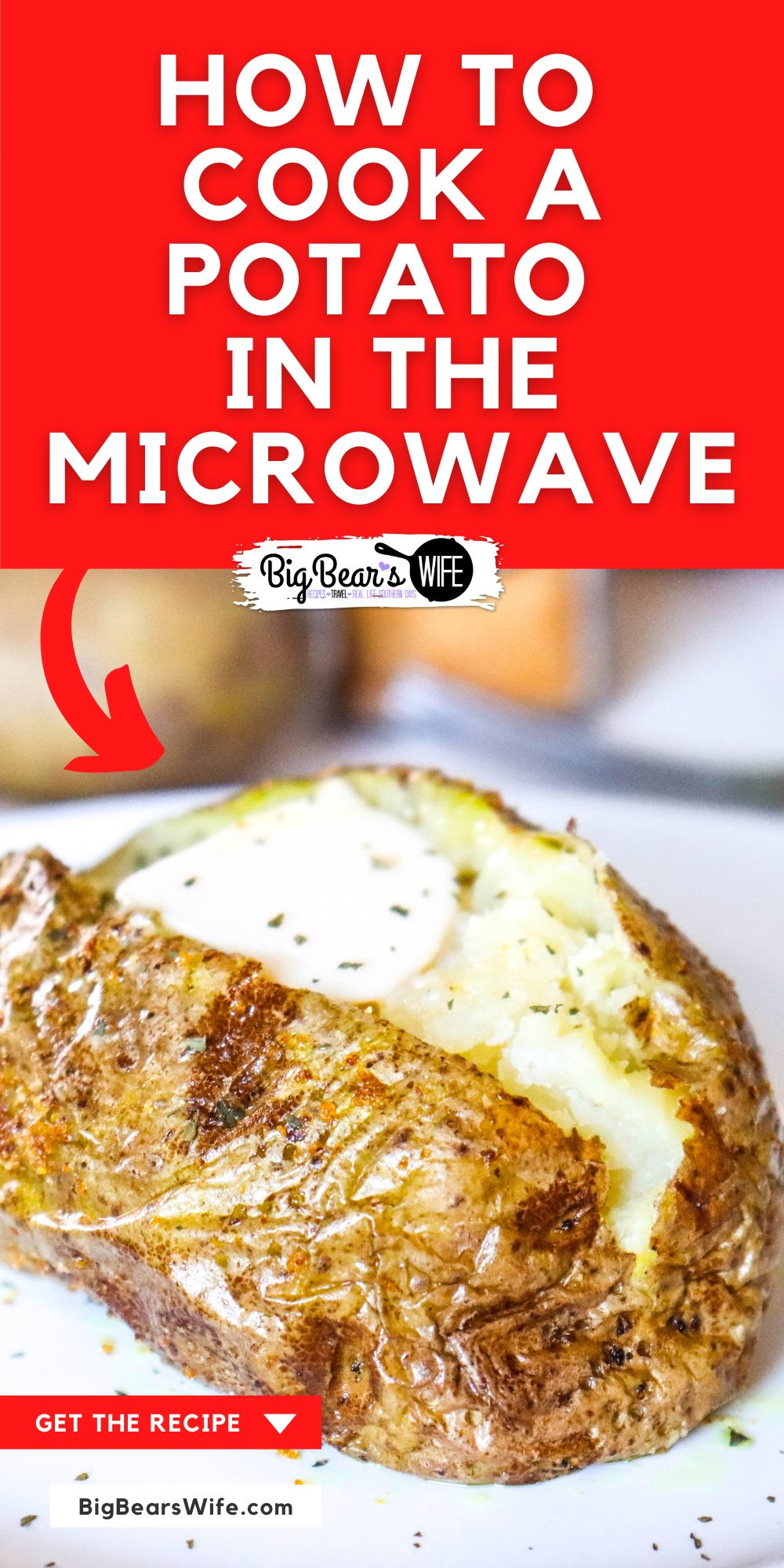 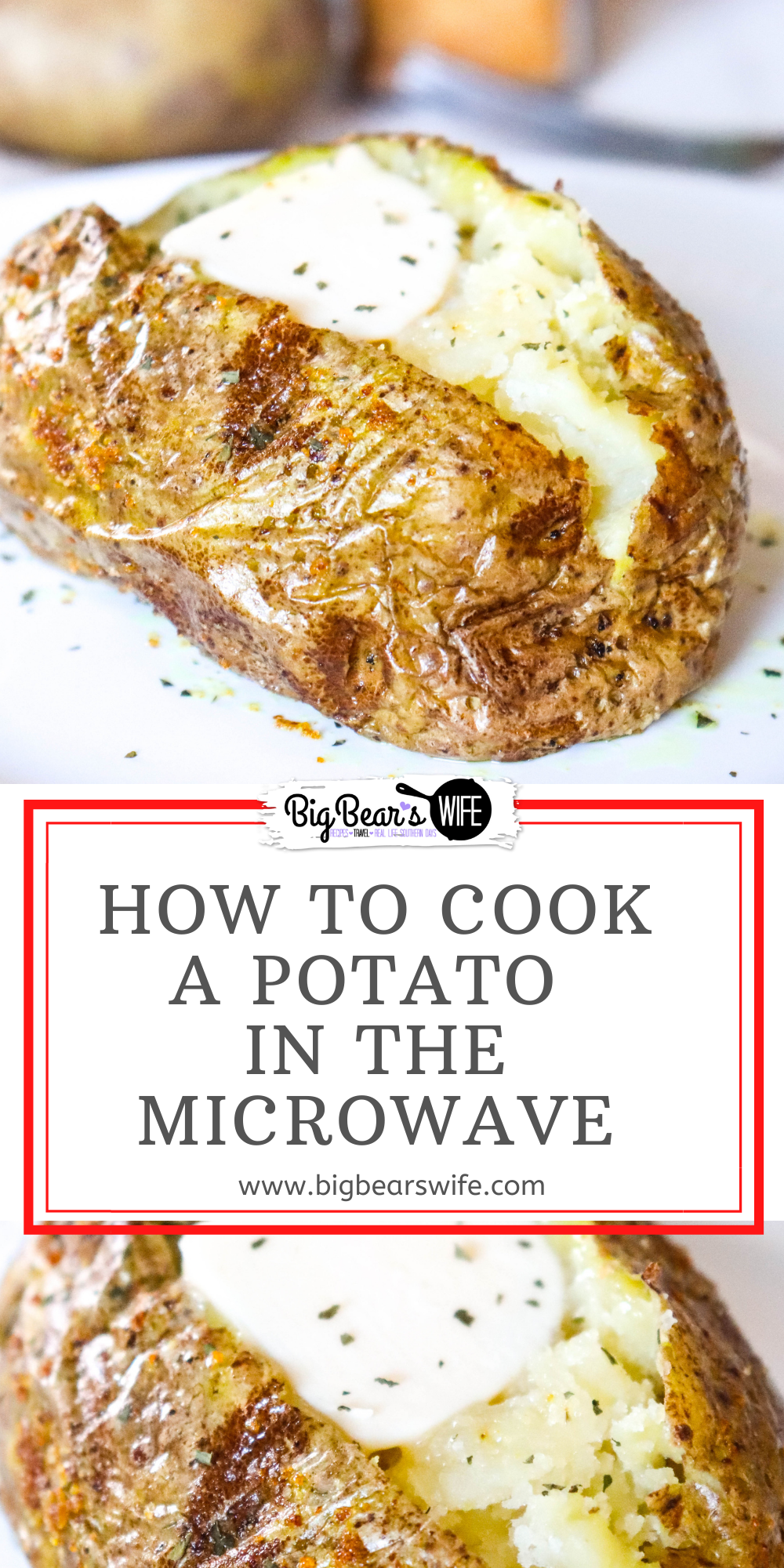 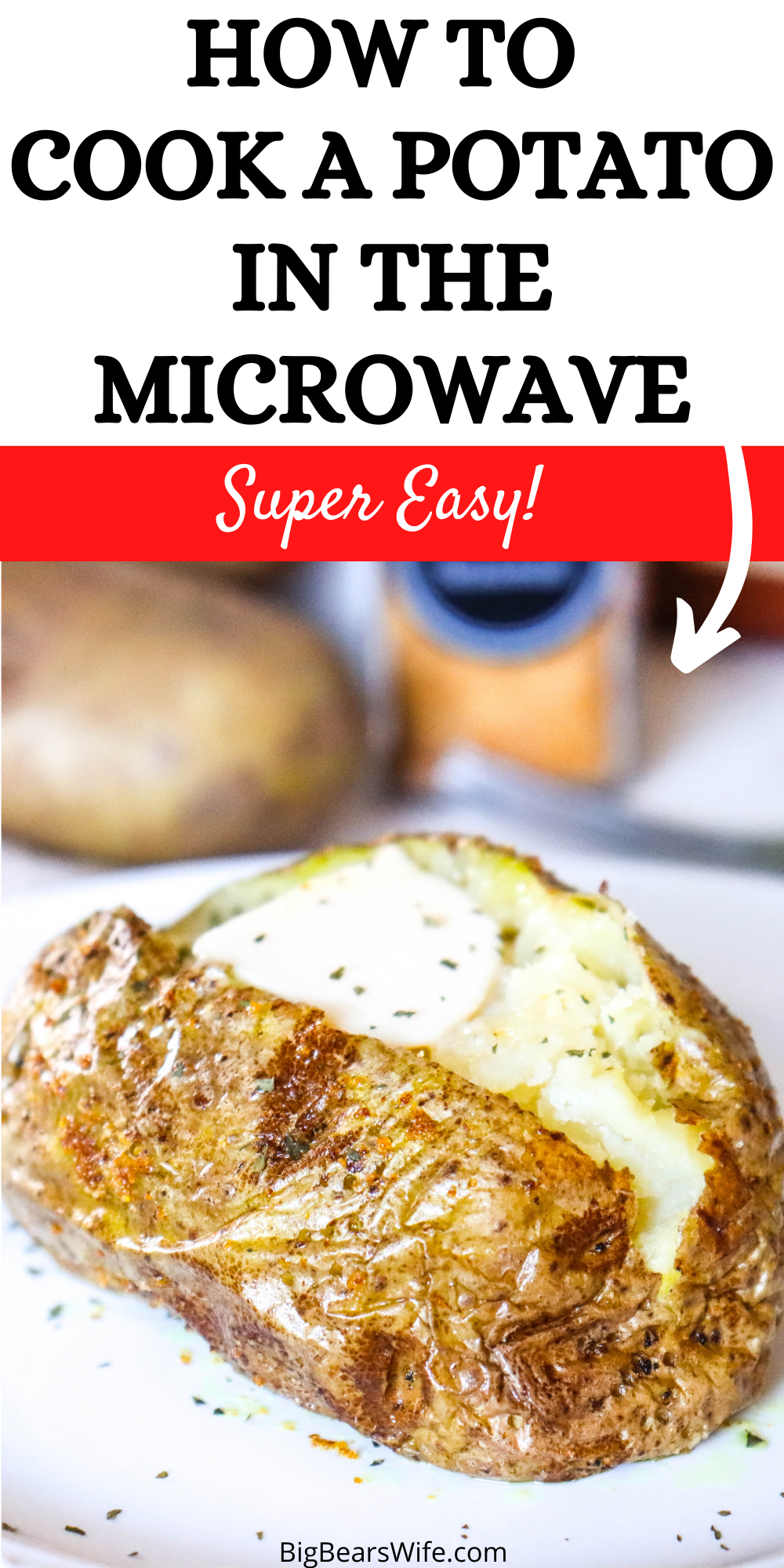 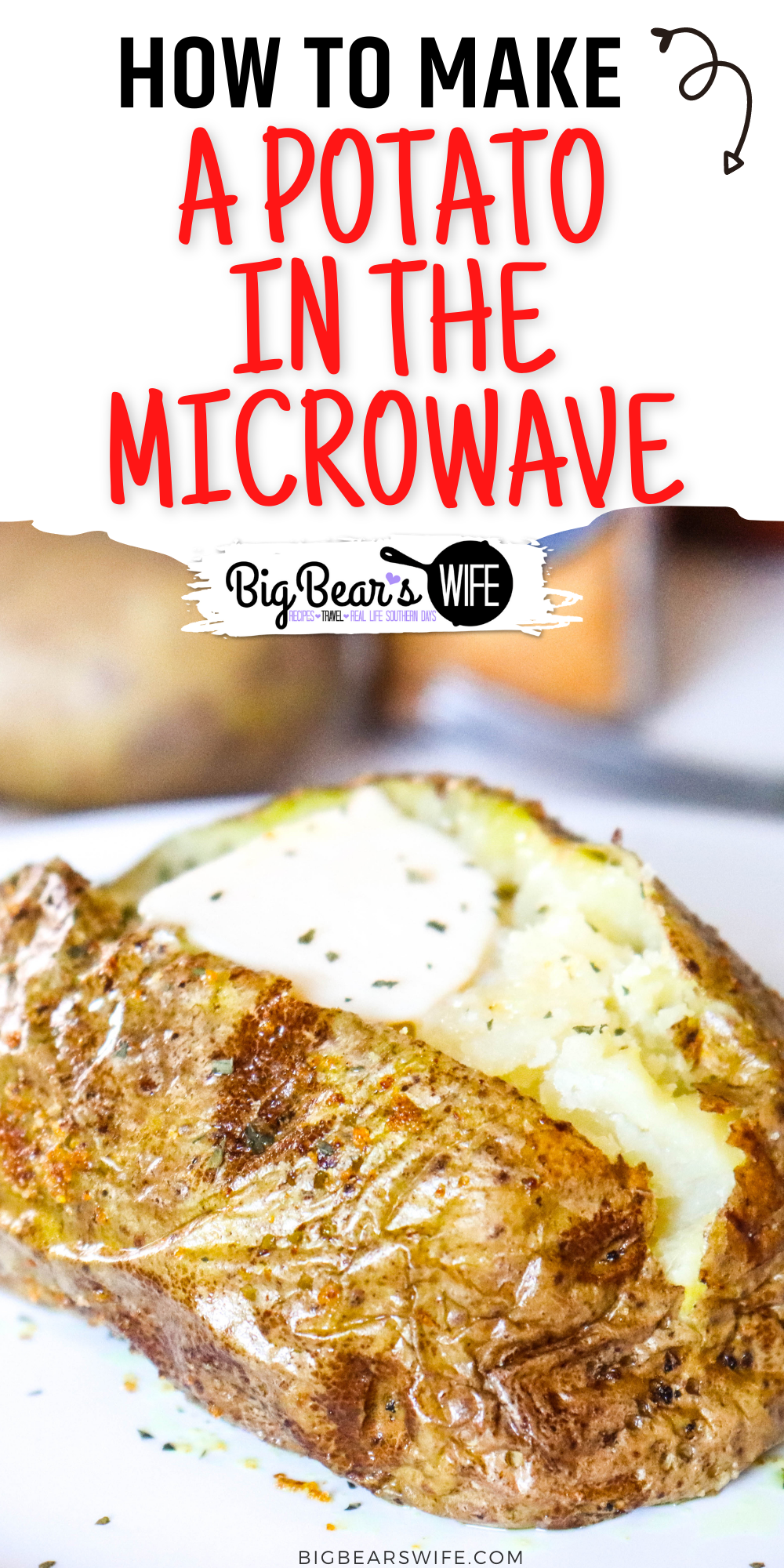 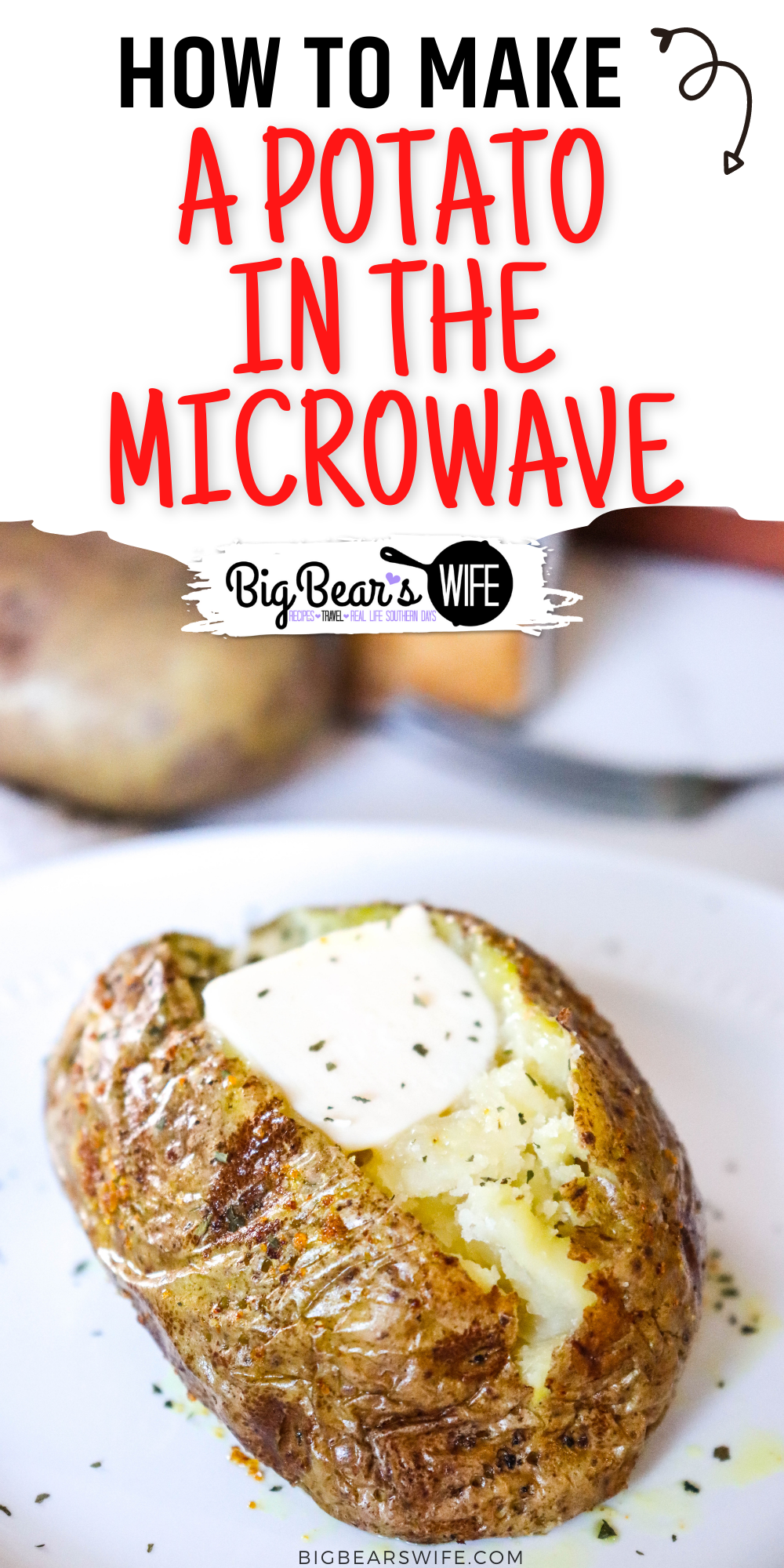 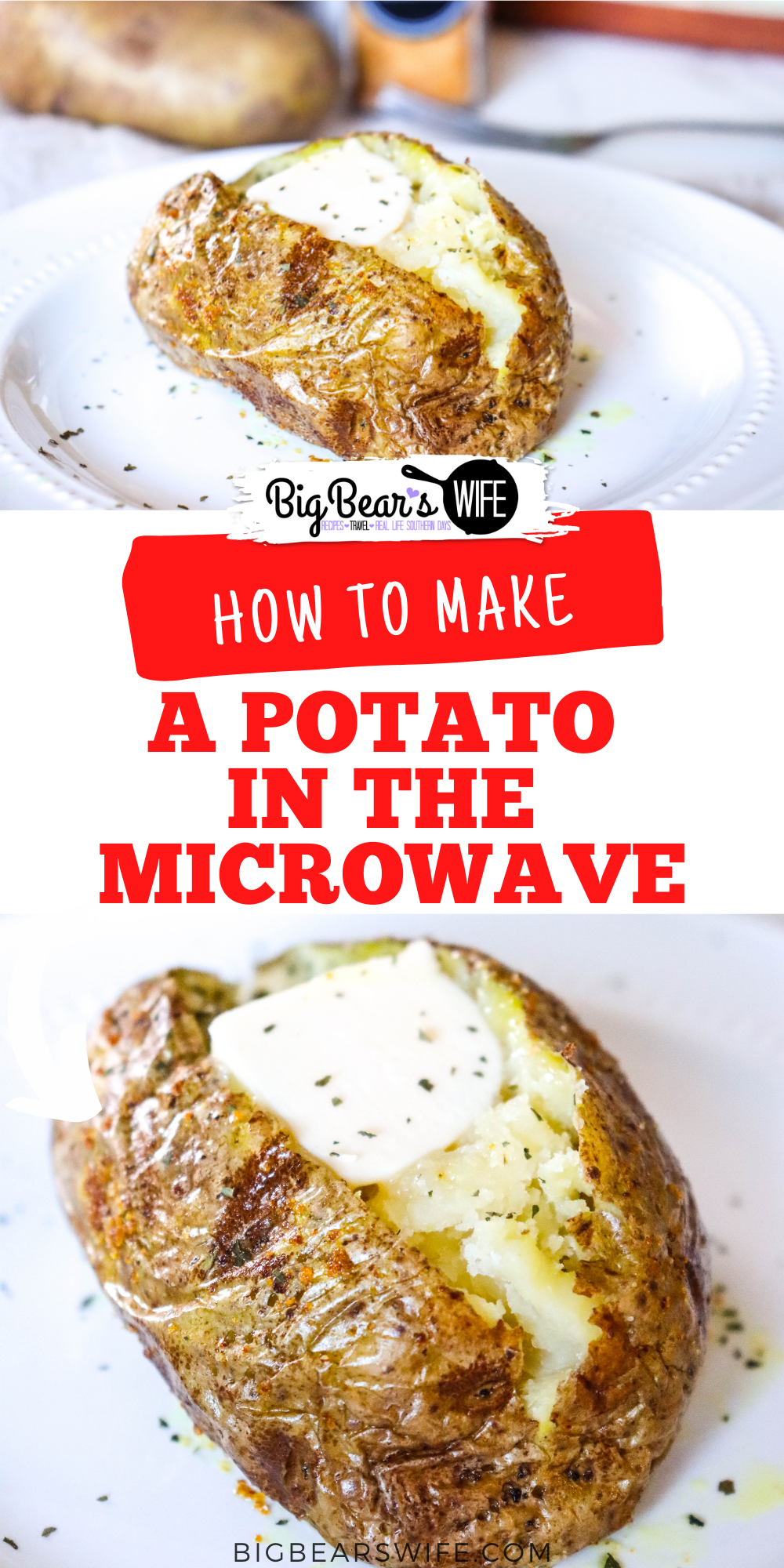 Love Baked Potatoes but short on time? No problem! I’ll show you How to Cook a Potato in the Microwave in 5-10 minutes! 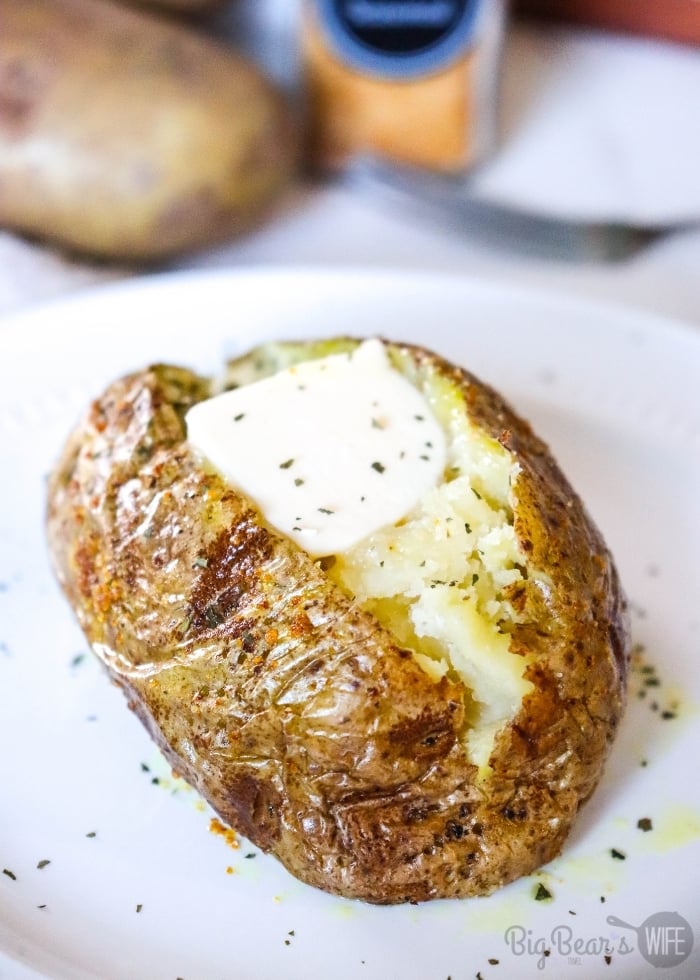 Want recipes delivered right to your inbox? Sign up here!  I send out free e-cookbooks too!

RECIPE IS BELOW IN PRINTABLE RECIPE CARD BUT BLOG POST IS FULL OF “HOW TO MAKE IT”, TIPS, INFORMATION AND FAQ

Baked Potatoes are one of my favorite things to make as a side dish and as a main meal sometimes. However, most days, I don’t always have the patience or time to cook them in the oven. That is why I love to pop them into the microwave. In this post, I’ll show you how I like to cook “baked” potatoes in the microwave.

Quick Glance at what you’ll need to Cook a Potato in the Microwave: (ingredients and amounts in recipe card below)

How to Cook a Potato in the Microwave:

We’re starting with the good ol’ Russet Potato for these “baked” potatoes.

Start by washing and drying the potato. Most of the time they will still have some of the farm dirt on that and we just want to go ahead and get that off. 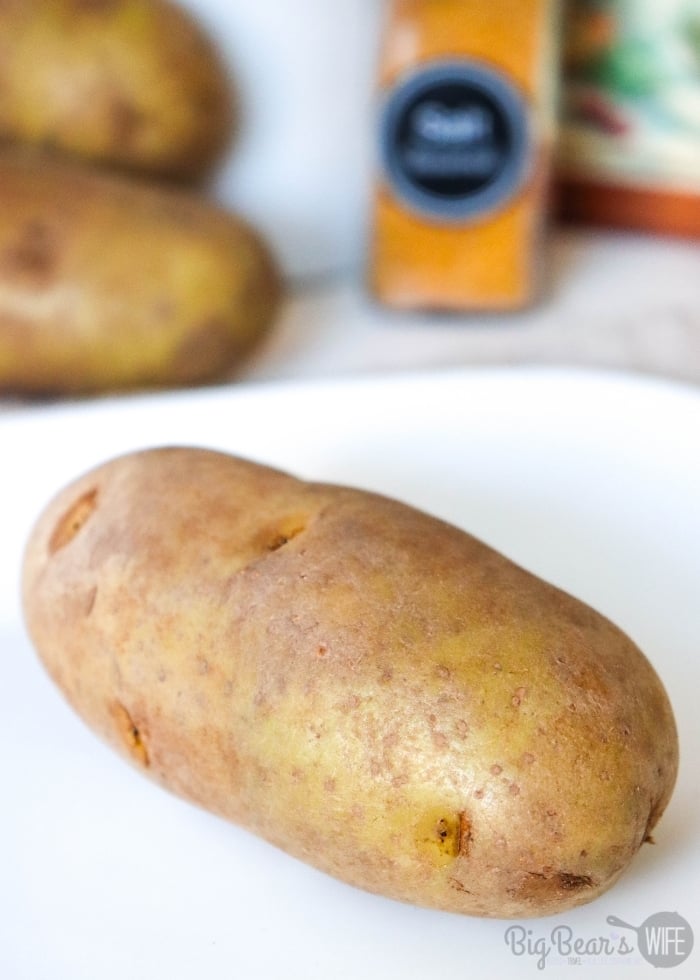 Once the potato is washed and dried, it’s time to start prepping it for it’s trip to the microwave.

Use a fork and prick holes on all sides of potato. This is suppose to keep the potato from building up too much pressure and exploding. I’ve ready lately that you don’t have to do this BUT I’m not taking any chances. I don’t want a potato exploding in my microwave.

So just take about 15 seconds and prick all sides of the potato. Yes, we’re going to poke holes into the potato. 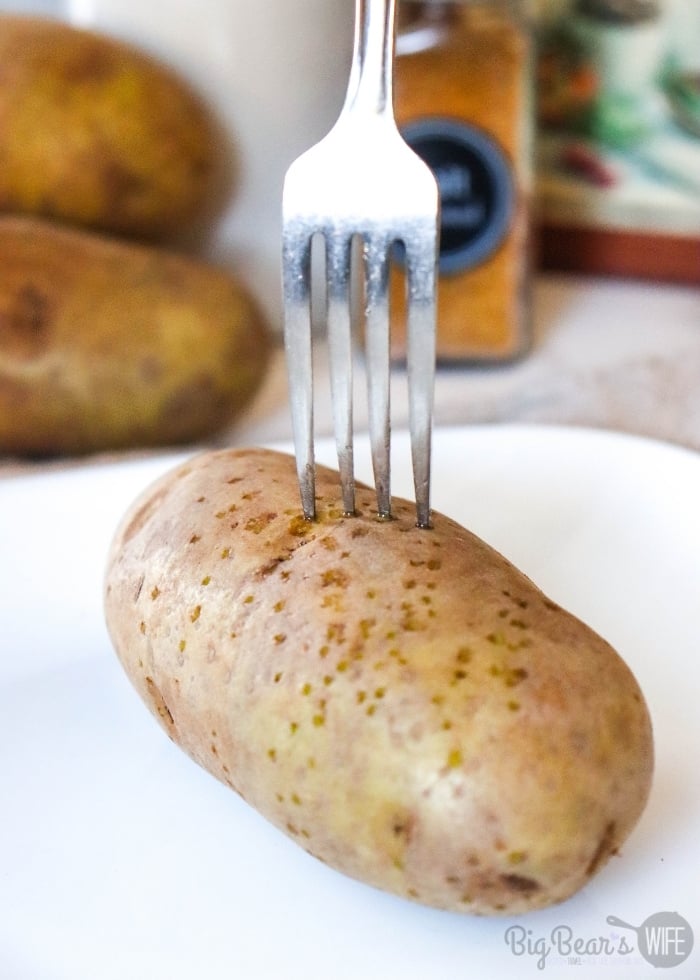 This part is kind of, sort of optional. I think you should do it but my husband would probably skip this part.

One of my favorite parts of a baked potato is a nicely seasoned potato skin. That’s where the olive oil and seasoning salt comes into play. 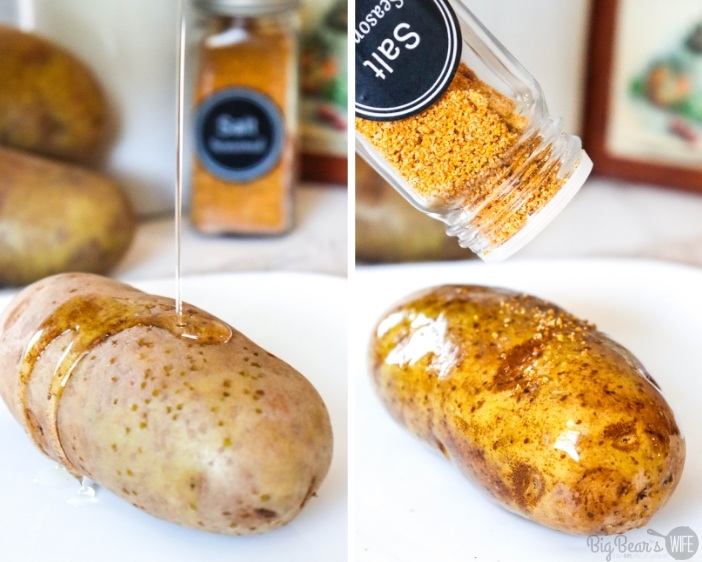 Lightly cover potato in olive oil and then sprinkle potato on all sides with seasoning salt. You could use no salt seasoning salt if you’re worried about the amount of salt or maybe even something like a Cajun seasoning to change it up a bit.  Black pepper is fine too if you want to sprinkle a little of that on but I normally save that for the inside of the potato. I think the salt or seasoning salt on the outside really adds to the flavor of the potato skin.

Place potato on a microwave-safe plate and into microwave. 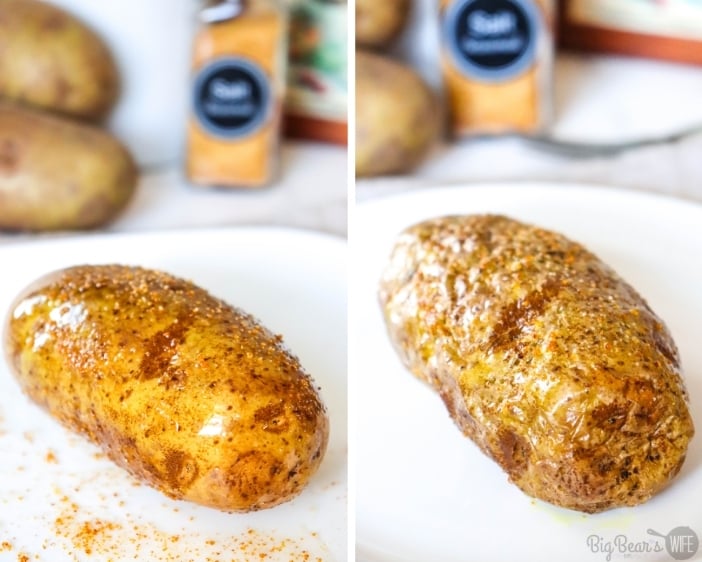 How long does it take to cook a potato in the microwave?

When 5 minutes is up, use a toothpick or a fork to gently pierce the top of the potato. If potato is tender and soft it’s ready. If not, stick it back into the microwave for 3-5 more minutes.

Cooking time on the potato is going to vary depending on the size of the potato. That’s why I don’t want to start off at 10 minutes. Sometimes I’ve stuck a potato in for 5 minutes and it’s done but then other times, it takes the full 10 minutes to get the potato soft. Smaller potatoes won’t need as much cooking time as the larger ones.

If your microwave has a “potato” button, you can always use that but I have found that due to potato sizes that sometimes it has to do the “potato button” twice to be soft. 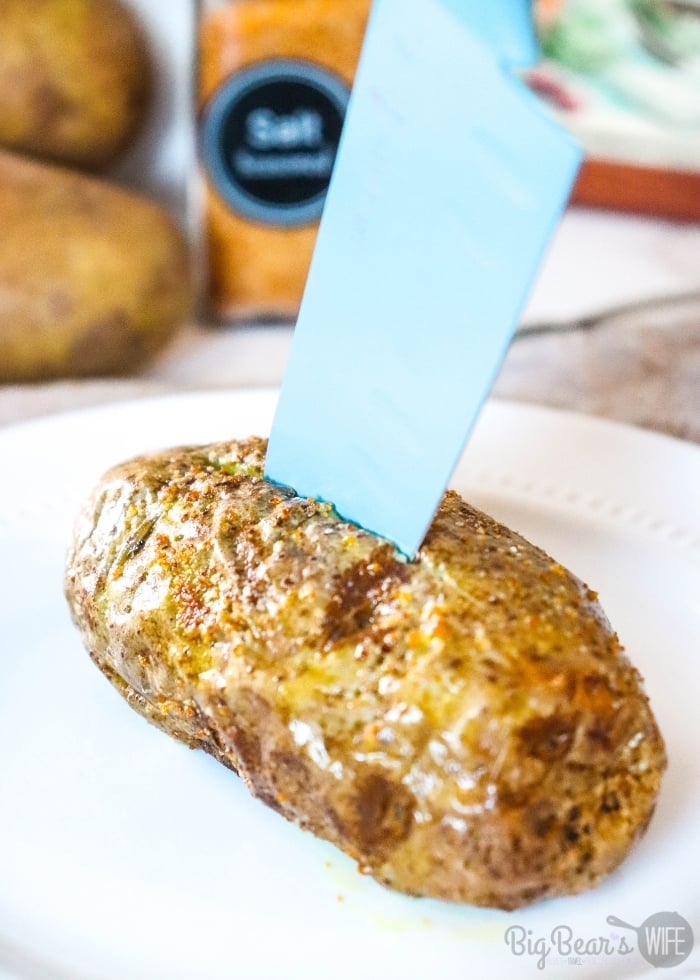 Once potato is soft and has passed the toothpick/fork test, it’s time to open it up for toppings. Be careful because this is going to be one hot potato.

Carefully split top of cooked potato lengthwise with a knife. Place palms if hands on each of potato and press towards center to open. 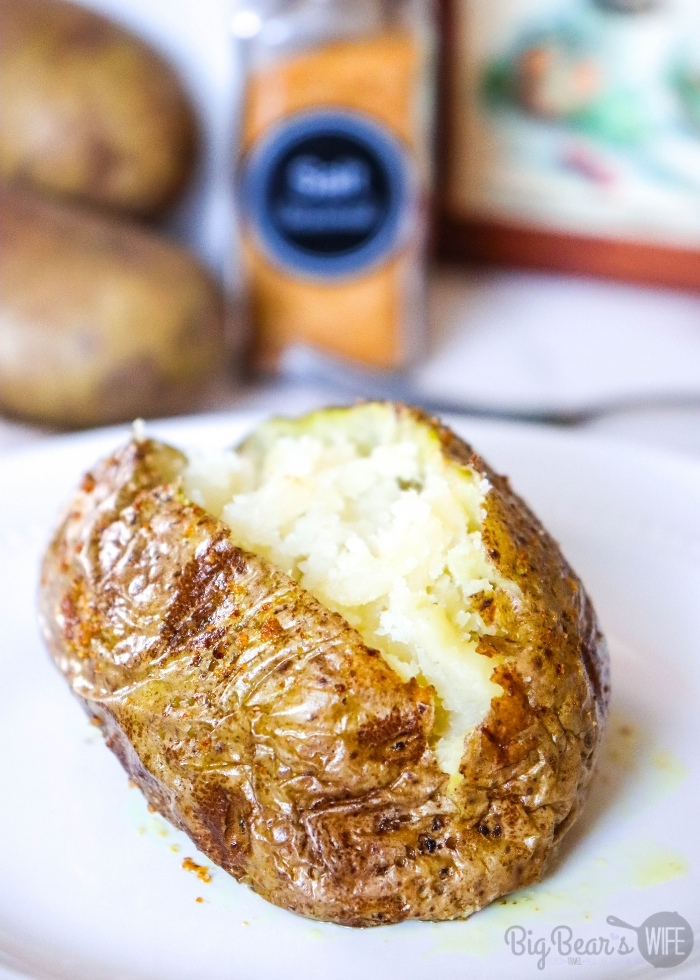 Top with butter, parsley or any of your favorite baked potato toppings. My favorite toppings are butter, sour cream and cheese.

How long does it take to cook a potato in the microwave?

Do I need to add olive oil and salt to the skin?

You don’t have to but I recommend it to make it taste better.

Can I cook more than one potato at a time in the microwave?

Yes but the time will increase! Depending on the size of your microwave, you can cook around 2-3 at a time. The time may need to increase, so just check each potato after about 7 minutes and add 3-4 minutes if needed.

What types of potatoes should I use for baked potatoes?

Russets potatoes are the best for baked potatoes because they are high in starch and low in moisture which makes them nice and fluffy after being cooked.

Making potatoes like this is also great if you’re going to be having a baked potato bar like we had for Jackson’s Puppy Dog Pals birthday party.

Ps. Did you know that you can also cook “baked potatoes” in the air fryer? You sure can! I have a post here on How to Cook Air Fryer Baked Potatoes!

How to Cook a Potato in the Microwave

I love to see what you’re cooking from the blog!