I found this recipe online and for the life of me can not remember where. I thought my printed version would have had the URL but it didn’t so I’m sorry. But whoever you where THANK YOU!

Also to my readers: I’m so SORRY about the horrible picture! I was way to hungry to snap more lol 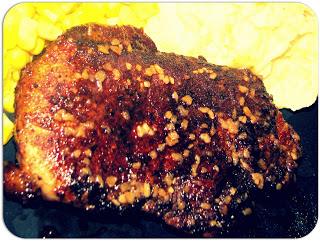 I have been trying to save money everywhere I go and food is no exception. So when I went to Dan Valley a few weeks ago I hit the jackpot on meats. Some were to expire in a few day but hey all i had to do was freeze it and it would last at least a few more months.

I got so many awesome deals like the pork tenderloins. I got a pack of 3 pork tenderloins for $2.10. Yep $2.10. That’s pretty good in my book. Especially since I had all the other ingredients at home. That Means this dish cost be about $2.00. Dinner for Hubby and I and leftovers for lunch for me today!

When I was fixing this last night my husband was in charge of mixing up the glaze while I was cooking the tenderloins…………the whole time he was mixing it he turned his nose up at it….. “brown sugar and garlic gross”! BUT lets just say by time everything was done and finished eatting his last comment was “This must be on the menu once every 8 days”……random i know but i think he liked it 😉

I was missing Cumin so I subbed Paprika

For the spice rub: 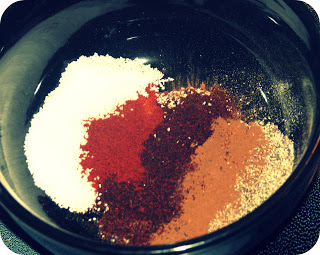 Combine the salt, pepper, paprika, chili powder and cinnamon in a small bowl. Stir together with a fork to blend. Pat the mixture over the pork tenderloins.

Heat the oil in an ovenproof 12-inch skillet over medium ( I used a cast iron skillet for mine) . Place the tenderloins in the skillet and brown on both sides, turning occasionally, about 4 minutes total. Remove from the heat, leaving the pork in the skillet.

Stir together the brown sugar, garlic and Texas Pete in a small bowl until blended. Spread evenly over the tops of the tenderloins.

Place the skillet in the preheated oven and cook for 20 minutes. 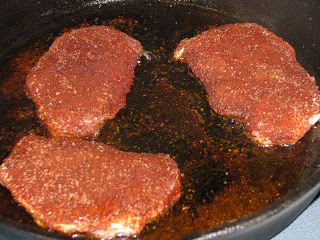 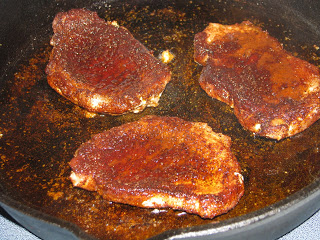 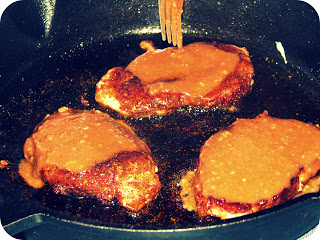