I have yet to see the new Monsters University movie. I’m going to blame it on the fact that I don’t have kids yet so I normally don’t see those kinds of movies until they come out on DVD. 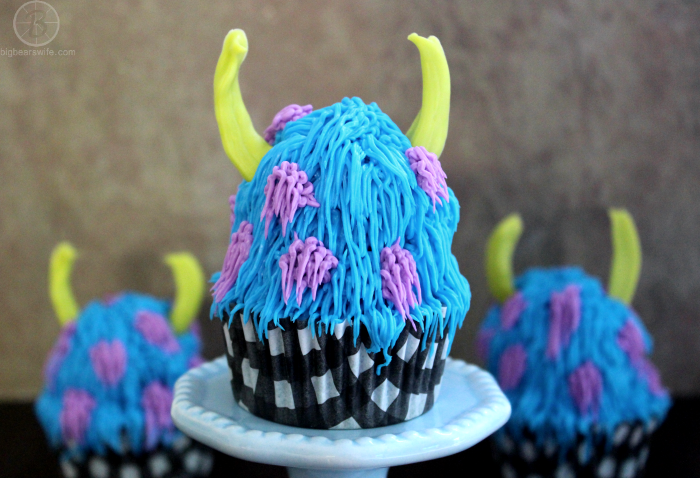 #1 because I don’t have any kids to use as an excuses to go and #2 I don’t like crowded movie theaters…. and I figure a kids movie is normally going to be packed with kids and their parents, too many people in such a small space. 😉

It takes everything I have to make myself to go the movies when it’s something that BigBear and I really really want to see, so normally the kid movies are out of the question. But that’s ok, I don’t mind waiting until they come out on DVD. I like my house better anyways haha.

Back in May, I got to watch the cupcake masters at Disney go thought the steps and motions of making some of the cutest cupcakes ever for our lunch during Food Blog Forum! One of these cupcakes just happen to be Sully from Monsters University! 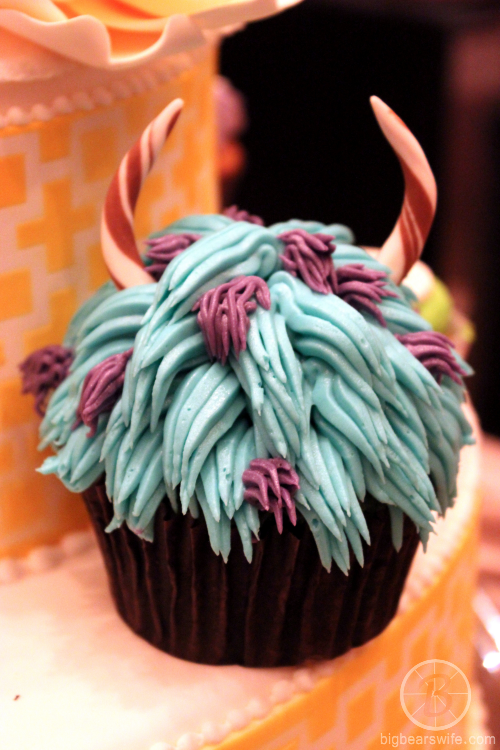 I am not even going to pretend that my version is “just as good” because I know it isn’t. They are quite amazing at what they do there and they were whipping out sully and mickey mouse cupcakes left and right. I mean we all know that those are only super awesome because the magic of Disney is backing them but whatever. 😉 No but really if I had the magic of Disney behind my work, it would rock your socks too! 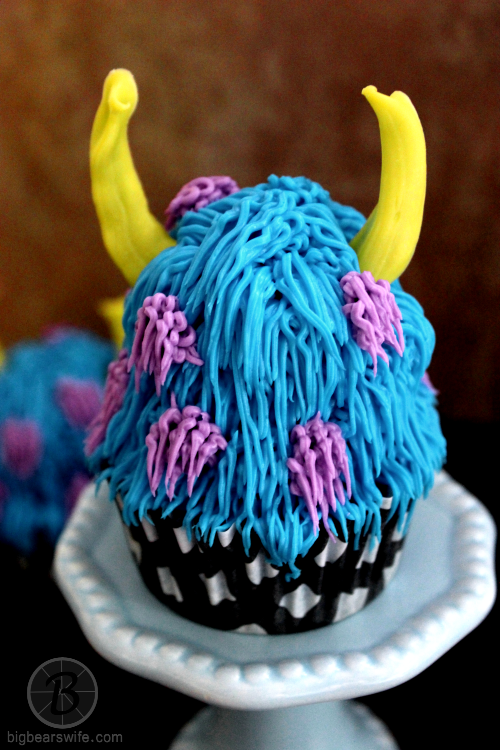 #1. Disney Cupcakes are HUGE. When I say huge, I don’t mean that they’re just kind of a little larger than normal, no… they are ginormous, so detail looks better on them….and probably so that you don’t feel guilty when you spend $6.00 on said awesome, detailed cupcake.

#2. They have awesome candy for Sully’s horns, which I couldn’t find, so I used Chocolate. Green colored chocolate actually. I figured that since Mike in the movie is green, and monsters… well green is a good color for monsters, I figured that it would work for now.

#3. Disney Magic… don’t know what else to say about that one haha

Like I explained with my Mickey Mouse Oreo Cupcakes I just made regular sized cupcakes instead of the giant ones.Also THAT IS NOT A TOWER OF FROSTING haha. I learned a little trick from the Disney cupcake makers!

Then, pipe the icing onto the cupcake, around the cake ball, to add the height.

I also used store bought icing for these because I found the blue and purple I needed in the Pillsbury brand and didn’t have to mix my own colors. But that’s really only because I was playing around with re-creating the Sully cupcake. If I were making these for a party, I would make my own icing because it’s cheaper 😉 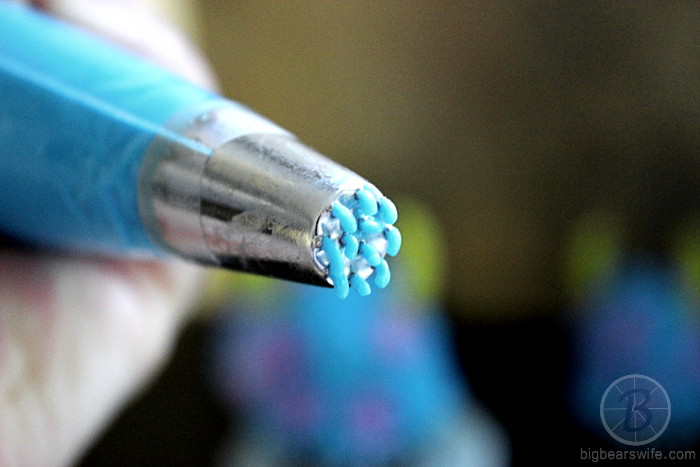 Jade (the Disney Cupcake Maker) was more than happy to build a Sully Cupcake for me so that I could take photos of her making it. I created a little video (below) of her making the whole cupcake so be sure to check that out. Thanks Jade!! 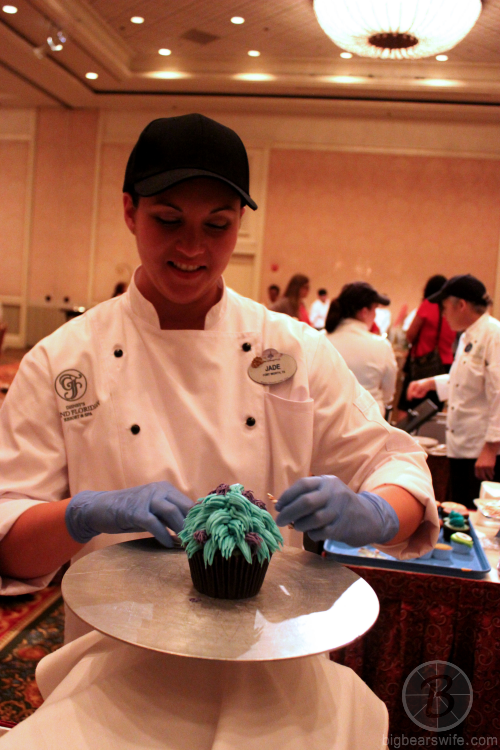 I use this recipe

In a large bowl, mix together cake mix, flour, sugar, and salt.

In the bowl of a mixer, mix together the egg whites, water, and vanilla.

Mix on low for about 10 seconds. Slowly add the dry mix a little at a time. Mixing on low until everything is combined.

Line a muffin/cupcake tin with paper liners. Fill each cupcake liner 3/4 full of batter. Bake for 25 minutes. Remove from oven and cool.

Once cooled, use a small spoon or knife to remove from of the center of the cupcake. Set aside.

Add a few tablespoons of icing to the bowl of cupcake centers. Mix together until a dough forms. Roll dough into 2 inch balls and place one on top of each cooled cupcake.

For the Green chocolate melting wafers for horns:

Melt a little green chocolate according to the package directions. Use a piping bag to pipe little green horns  onto wax paper. Let them harden and then peel away from the wax paper.

Stick in the chocolate horns to finish the monster cupcake. 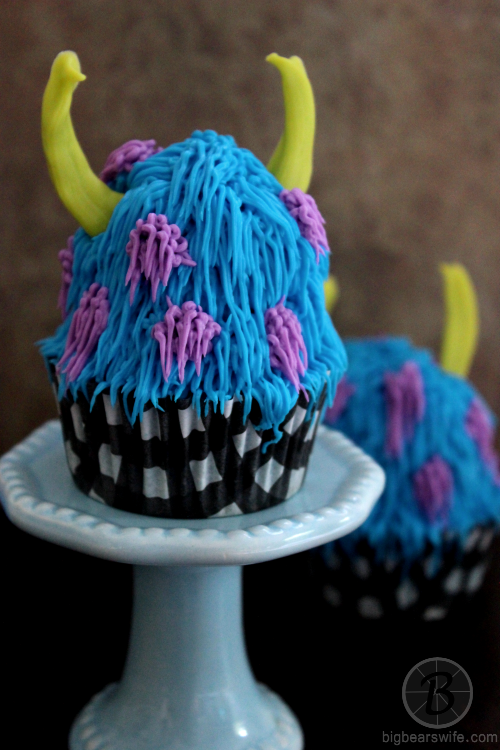 Here are a few other Monsters University goodies that I’ve seen floating around the Internet!