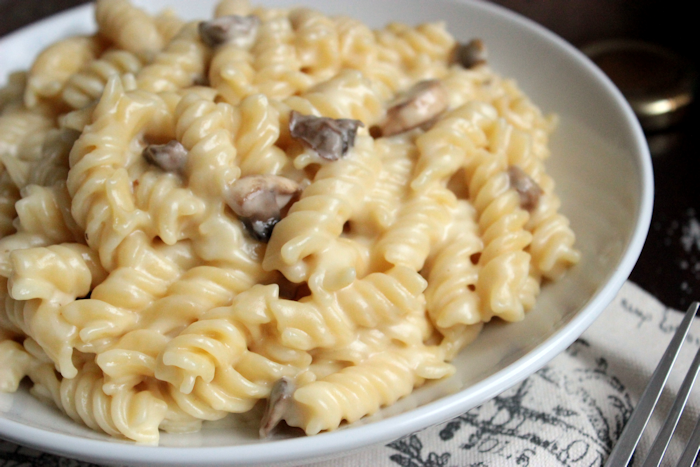 I wish that I could just hand you a fork through the screen and let you taste this Mushroom and Truffle Sea Salt White Cheddar Macaroni and Cheese! It literally makes my taste buds so happy that I have the hardest time describing the taste. It’s a rich, sharp and flavorful Macaroni and Cheese that will have you going back for “just one more bite” over and over again! 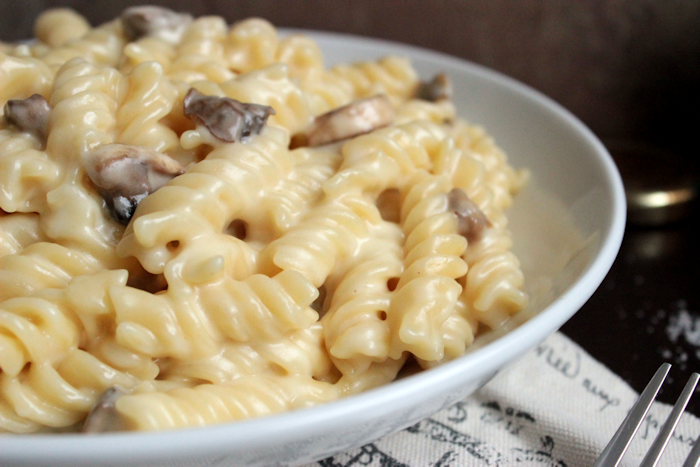 This mac and cheese is a slight adaption from the Black Truffle White Cheddar Macaroni and Cheese that I started making a year or so ago after a trip to Disney! You see, a guy that was working The Spice & Tea Exchange section of “Mickey’s Pantry” in downtown Disney told me about this awesome sea salt called “Black Truffle Sea Salt”. He told me about a white cheddar mac and cheese that he had made before and I scooped up a few little bags of the sea salt right then and there! Oh the smell of the  Black Truffle sea salt was intoxicating. I loved it. 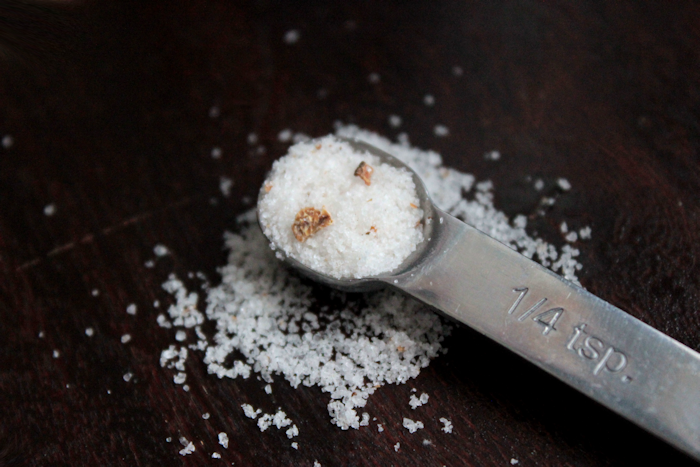 Well I ran out of the beloved sea salt a while back and found a jar of Sabatino Truffle Sea Salt that had the same wonderful smell! I was in love all over again! 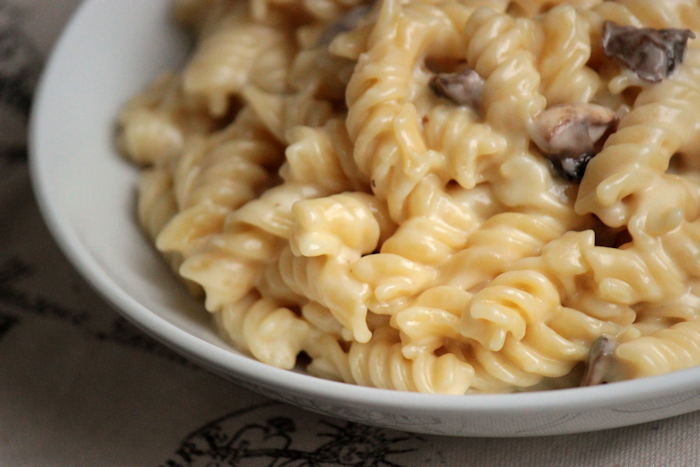 The smell, the taste on my word! But as much as I love it I’ve only made white cheddar mac and cheese with it! I’ve never even attempted to put it on anything else haha. It’s only purpose in my home is to make wonderful mac and cheese! Also, it’s a “special occasion” mac and cheese for me! 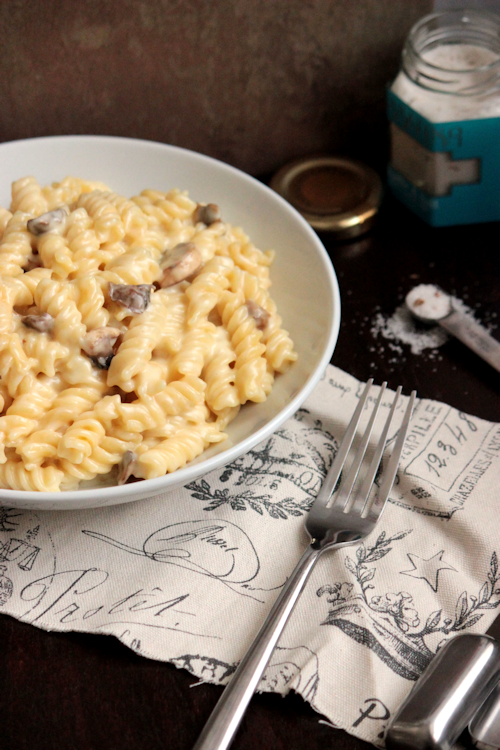 That’s why I’m sharing it with you today! Today starts Mac and Cheese Mania! Rachel from Rachel Cooks and Brandy from Nutmeg Nanny have been working together to bring you Mac and Cheese Mania which includes TONS and TONS of Mac and Cheese recipes and chances to win some fabulous prizes! So after you scroll down and take a peek at this recipe make sure to head over to either Rachel Cooks OR  Nutmeg Nanny to link up your best mac and cheese recipe for a chance to win! (PS. you DO NOT have to be a blogger to enter! Everyone is welcome!)

Mac and Cheese Mania is being sponsored by Door to Door Organics and OXO.

What kind of prizes do they have in store for you?! I’m so glad you asked! Prizes include: Door to Door Organics Gift Cards, OXO Gift Baskets, Zak Designs Prize Pack, a year’s supply of Cabot cheese, a Vermont Creamery gift basket, a risotto kit from Marx Foods, Barilla pasta, Anolon Advanced Bronze 4.5 Qt. Tapered Stockpot, Rachael Ray Stoneware Casseroval, Wusthof CLASSIC Studio Block Set, Microplane Graters and Kitchen Tools, a SavorX Starter Block with spices and Le Cordon Bleu by Swissmar oven to table roasters. All giveaways open to US residents over the age of 18 only.  Ahhh so awesome! 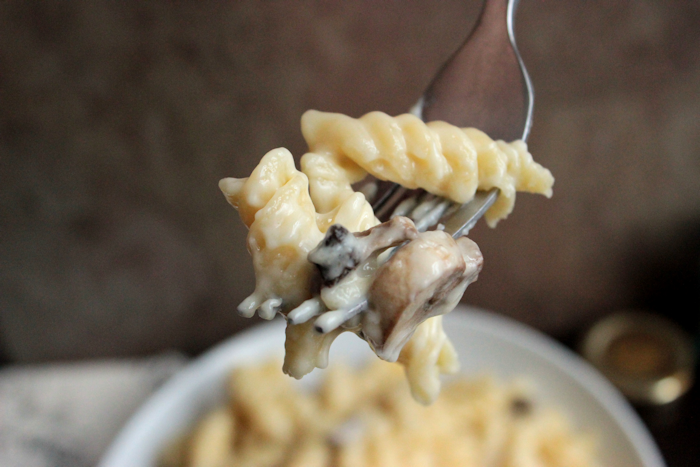 Back to the Mushroom and Truffle Sea Salt White Cheddar Macaroni and Cheese!! I normally just make this with the Sea Salt and white cheddar, but I love to experiment with mac and cheese combinations. So I chopped up a few mushrooms and cooked them with a little of the sea salt before adding them into the mac and cheese! Next time I’m thinking about adding chicken and just making this into a complete meal! 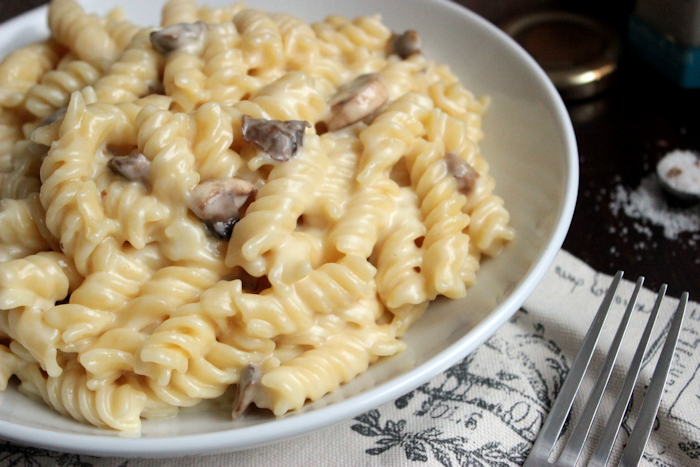 I found this bottle of Sabatino Truffle Sea Salt at Whole Foods but I’ve also seen it at Whole Market, Marshalls and TJ MAXX!

Drain the pasta and set aside.

In a sauce pan, heat a tablespoon or two on medium heat. Add mushrooms. Halfway through cooking the mushrooms add 1/4 teaspoon Truffle Sea Salt and stir. Cook mushrooms until done.

In a saucepan, heat heavy cream over medium heat until hot. Right before it starts to boil, add grated cheese and stir to melt. Turn the heat down to low and stir cheese until completely melted.

Next, mix in the pasta and the mushroom. Stir well! Serve immediately.

To reheat: Add a splash or two of milk before reheating. Macaroni and Cheese will thickening A LOT when chilled. 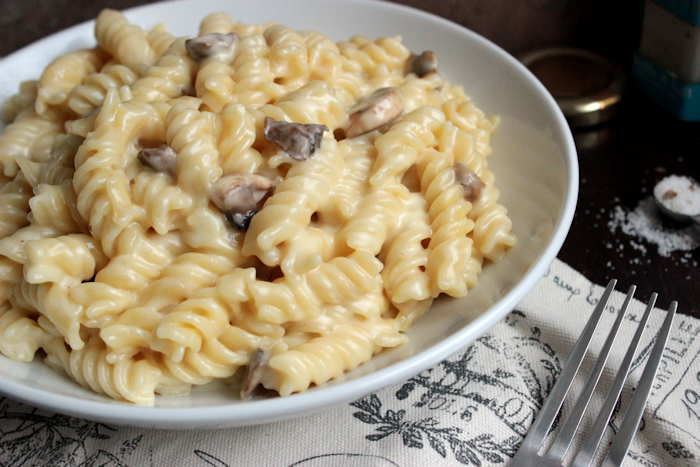 Before you go, I want to share some of the other “drool worthy” mac and cheese recipes that were made for Mac and Cheese Mania! You’re going to LOVE these!