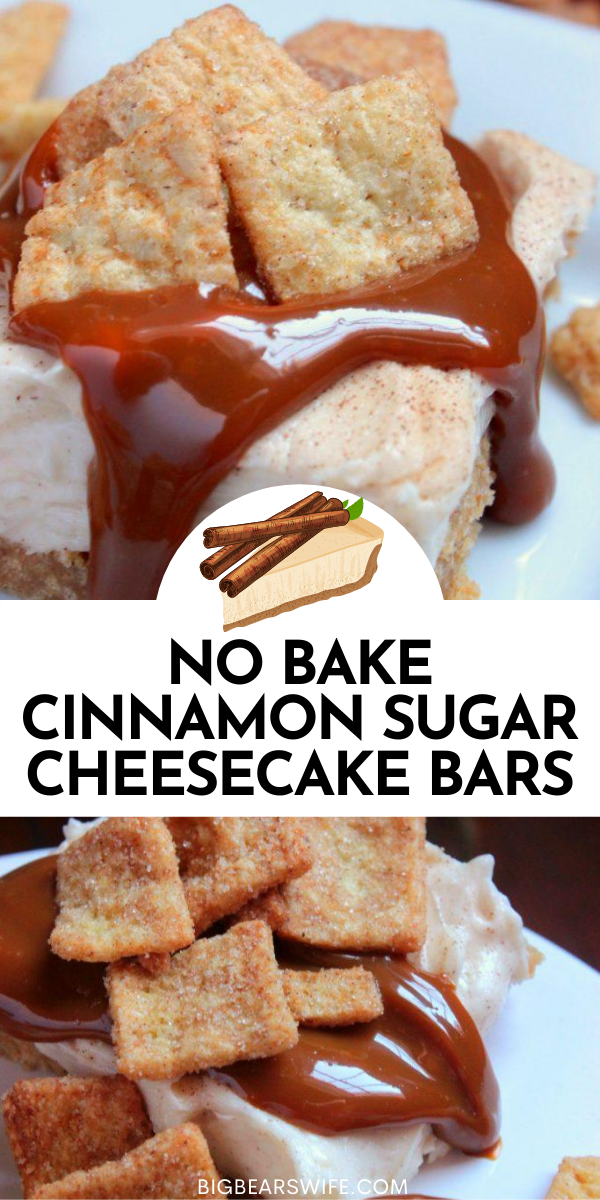 A smooth and creamy no bake cheesecake with a cinnamon sugar cereal crust!! These No Bake Cinnamon Sugar Cheesecake Bars are the best!

This is a sponsored post written by me on behalf of Post Consumer Brands. All opinions are entirely my own. We’ve always been in love with cereal around here. Whenever I think of breakfast as a kid I always think of cereal because that’s just what we had. We didn’t really do giant breakfasts because no one was a morning person; well except for my dad.  My brother and I always got to pick out our favorite cereal at the grocery store, and while it was mostly served as breakfast, I can remember a few “cereal for dinner nights.” Speaking of cereal for dinner, my husband is totally on board with that. We have bags and bags of Malt-O-Meal® cereal in our pantry and he’s more than happy to have cereal for dinner a few times a week. I’m not opposed to that, I mean hey, less dishes for us to do. haha. So as you can imagine, we go through quite a bit of cereal each week. That’s one of the main reasons that I like to buy most of our cereal in the big bags because that’s where I get my money’s worth!  Not only do we love cereal just as is, but I have to admit that I totally have a weakness for marshmallow cereal treats. I probably make them way more than I should but I just can’t help it. They’re so good, and I love making them with all kinds of cereal.  But let’s talk about these No Bake Cinnamon Sugar Cheesecake Bars for a bit! I know we’re crazy about marshmallow cereal treats around here, but you know what else cereal is good for when it comes to desserts? I mean, I know that a lot of people only think of graham crackers when it comes to cheesecake crusts, but oh my word; let me tell you about cereal crusts!  I love them mainly because you can make them with almost any type of cereal to go along with whatever cheesecake flavor you’re making.  For instance, when I made these Cinnamon Sugar Cheesecake Bars I didn’t want just a plain ol’ cheesecake crust. I wanted something with cinnamon that would go with the flavor theme I was working towards. Making Cinnamon Sugar Cheesecake Bars? You’re going to want to have a perfect cinnamon crust for that cheesecake.

But let’s think about that a little more, I mean they  have 34 options to choose from so I know there is something in there for every flavor of cheesecake. For instance, let’s say that you wanted to make a summer time s’more cheesecake. Maybe one with a no bake cheesecake filling with a bit of marshmallow whipped in, covered in a chocolate fudge sauce…well the S’more cereal would be ideal for that.

Or perhaps you want to make a honey type cheesecake, maybe honey and caramel? Well the Golden Puffs are exactly what you’d need for that crust!

Side note, have you ever made marshmallow cereal treats with Golden Puffs cereal or Cinnamon Toasters cereal? Oh my word, you need to! They’re amazing!

But back to the cheesecake and cheesecake crusts! I mean, can you just imagine all of the cheesecake flavors and crust combinations out there! It makes me want to get back into the kitchen and work on more recipes! Why cheesecake? What made me want to make a cheesecake with the Cinnamon Toasters cereal? Thomas, he’s the reason. I know how much he adores cheesecake and how much he loves his cereal, so I knew that these would be a hit with him.

These No Bake Cheesecake Bars do need to sit in the fridge for a few hours but the wait is totally worth it. Plus they hardly take any time to whip up! When I got ready to make these, I stopped by our local Food Lion to pick up everything I needed, drove to the apartment and got to work! Speaking of Food Lion, right now through 9/30/2016, they’ve got an in-store Catalina offer for y’all!

Be sure to check out more fun Malt-O-Meal recipes and 34 family favorite flavors!