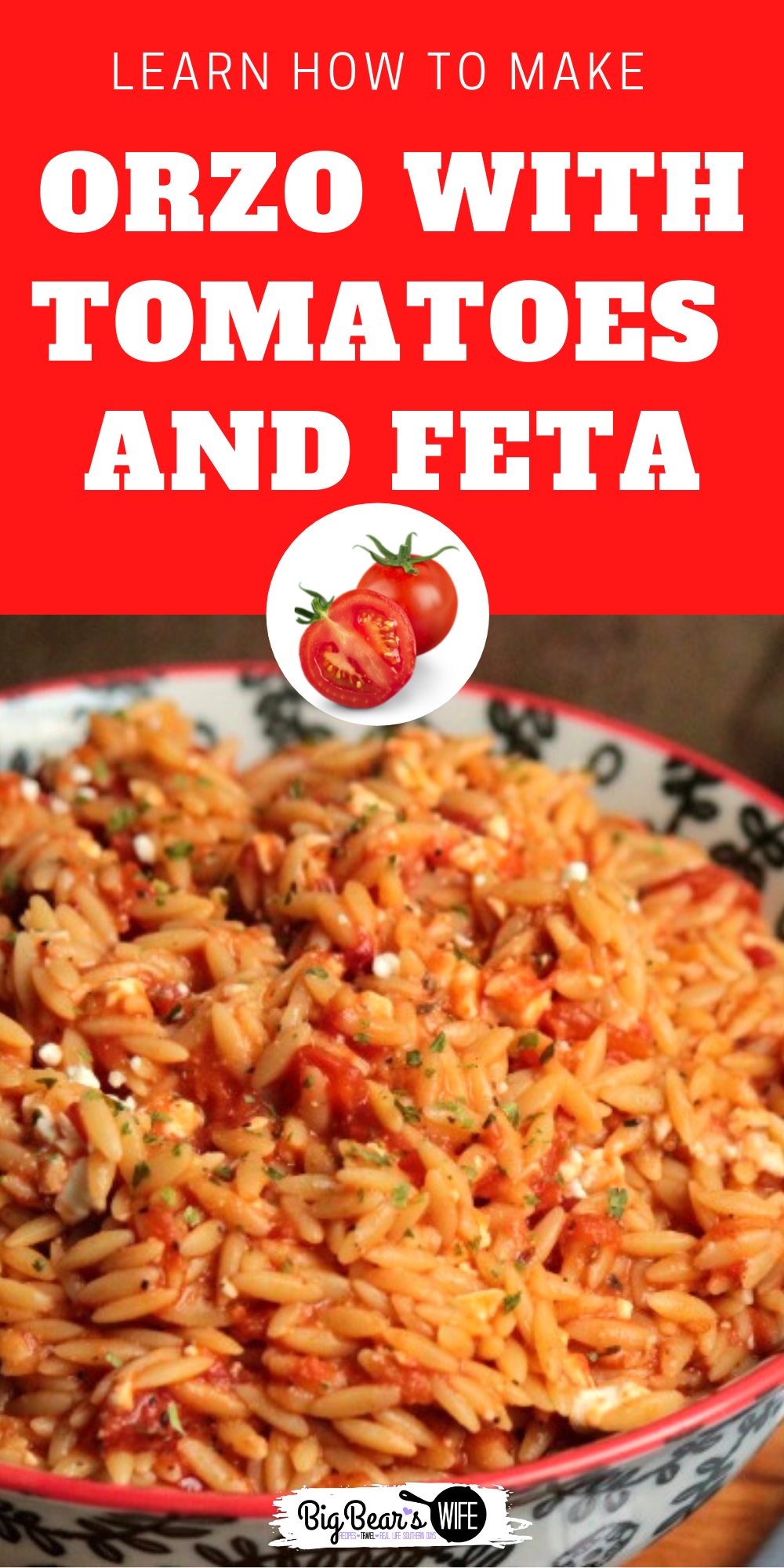 Orzo with Tomatoes and Feta is and would make a great main dish or serve perfectly as a side dish! The crushed red pepper flakes make it a little spicy so if you’re not too keen on spice you might want to leave those out. 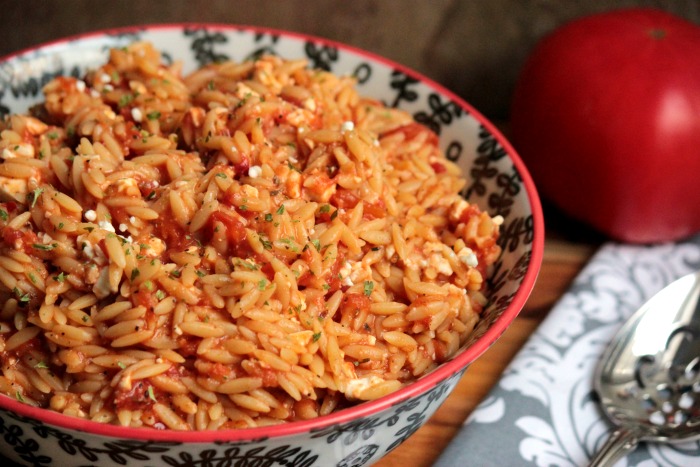 Bumpas was where we went to eat and hang out…a lot. My friend Nicole (Tilly) introduced me to Bumpas and it was there in a little booth by the window that I had my first taste of Greek food. It was the stuffed grape leaves on the menu that hooked me and kept me coming back for more.

I know it’s not the same but anytime I see a Greek Stand or place in a food court, I HAVE to order Stuffed Grape leaves! 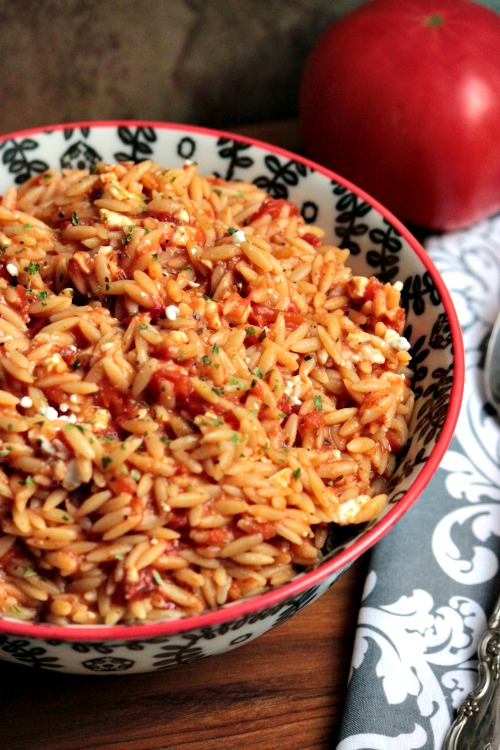 Do you know that I’ve never made them? Why is that? I swear that I put off some of my favorite foods because I’m afraid that I’ll mess them up! However give me one of Thomas’ favorites and I’ll make it and remake it until it’s perfect! Goodness….

Speaking of Thomas’ favorites, I do believe that we’ve added another to his list! I swear he was shoveling in this Orzo with Tomatoes and Feta as fast as he could! Now I’m all for pasta, but “whoa” at the speed he was going! haha Every time I asked him if he liked it he spooned more into his mouth haha.

It was kind of like that song from Alison Krauss where it goes “You say it best when you say nothing at all…..” hahaha 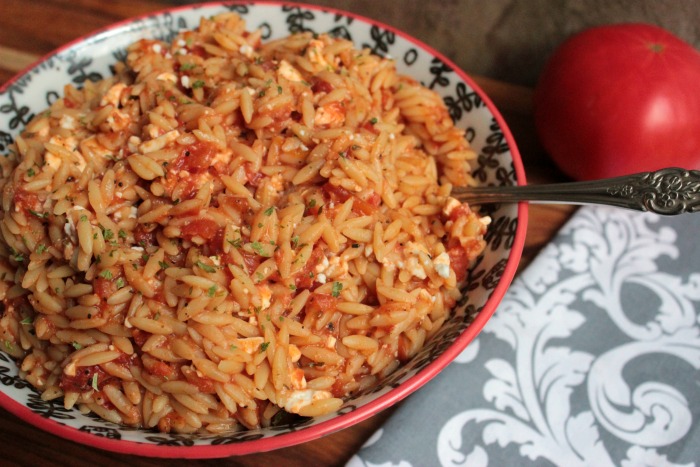 This Orzo with Tomatoes and Feta is from Debbie Matenopoulos’ new cookbook, “IT’S ALL GREEK TO ME”.

It’s light and would make a great main dish or serve perfectly as a side dish! The crushed red pepper flakes make it a little spicy so if you’re not too keen on spice you might want to leave those out. 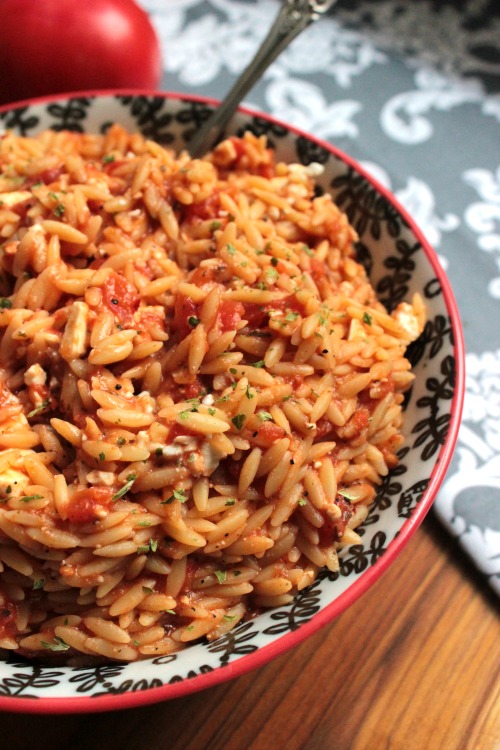 Like most things in my life, I jump back and forth from cookbook to cookbook but I’ve found myself wanting to read “IT’S ALL GREEK TO ME” more and more. Yes, I read cookbooks just like someone else would read a novel. I want to read it from front to back, gaze at all of the photos and catch up on the little stories that are sometimes sprinkles within the pages.

Debbie was born in Richmond, VA (about 4 hours north of me!) and grew up on her mother’s cooking! In the beginning of her cookbook she talks about the importance of family sitting down together and how her mother was an amazing cook. This book is her way of sharing her mother’s wonderful Greek recipes. 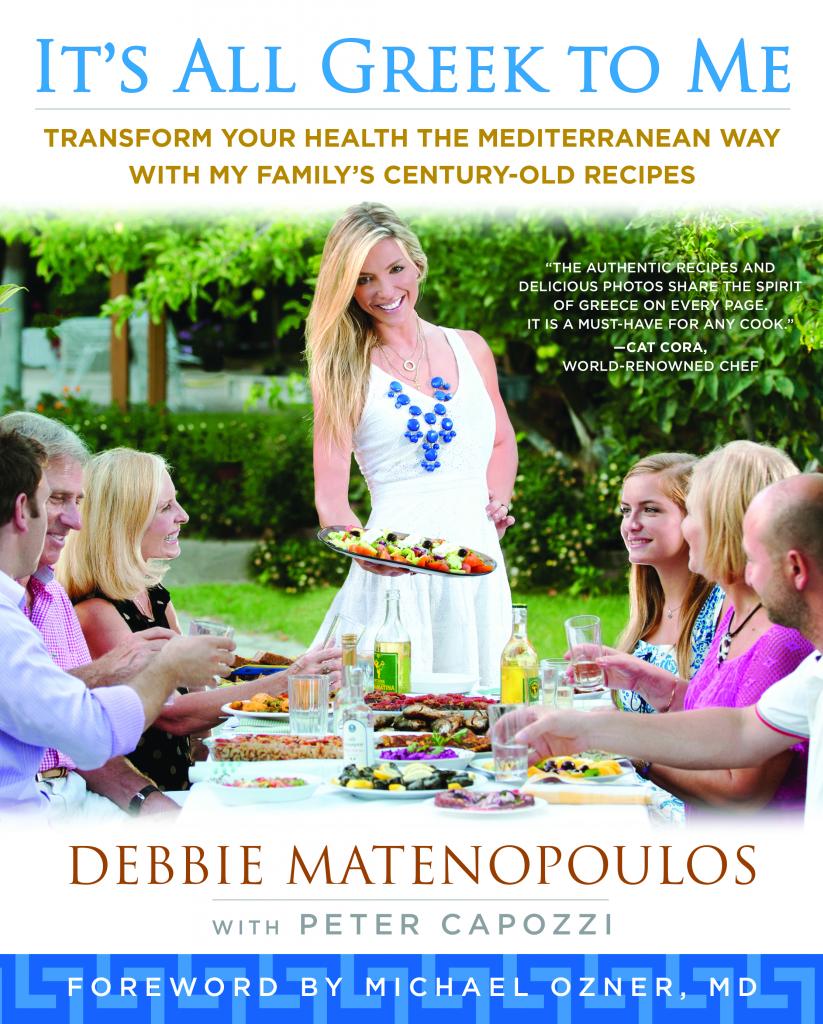 There are tons and tons of flavorful Greek recipes throughout the book as well as an “Alpha – Omega” (A-Z) list (with descriptions) of some of the ingredients you’ll find in the cookbook.

Oh and yes…. there is a recipe for Stuffed Grape Leaves…. now I just need to find some grape leaves!! 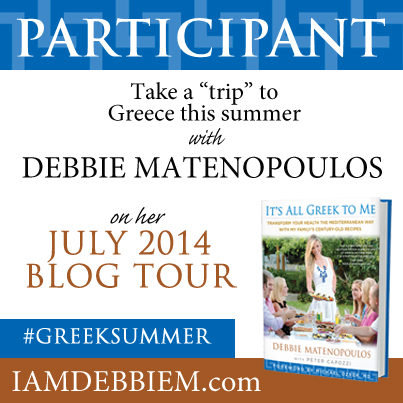 Orzo with Tomatoes and Feta #GreekSummer
by: Angie Barrett 07/23/14                                                (Click to Print)
SERVES 4
Ingredients
4 tablespoons extra-virgin olive oil, divided
1 medium yellow or red onion, finely chopped
2 cloves garlic, finely chopped
1/2 teaspoon sea salt, plus more to taste
1/4 teaspoon freshly ground pepper
1/4 teaspoon crushed red pepper flakes (optional)
1 recipe Mama’s Domata Saltsa  (about 2 cups of Stewed Tomatoes)
4 quarts water
1 pound dried orzo
1/2 cup chiffonade-cut fresh basil
1/4 to 1/2 cup brine-packed Greek feta, crumbled smallDirections
Heat 2 tablespoons of the olive oil in a large saucepan over medium heat. Add the onion and sauté until translucent, 5 to 6 minutes, stirring frequently. Stir in the garlic, salt, pepper, and crushed red pepper flakes (if using) and cook for 1 minute more. Add the stewed tomatoes and simmer for 10 minutes, covered, over very low heat. Taste and adjust seasonings, if necessary. Ladle out 1 cup of the sauce, and reserve.
Bring the 4 quarts of water, liberally salted, to a boil. Add the orzo and cook for about 7 minutes, leaving it slightly undercooked. Ladle 1 cup of the pasta cooking water into the reserved tomato sauce. Drain the orzo well and add it to the tomato sauce. Stir to combine and cook over low heat for 1 to 2 minutes, until the orzo is al dente and well coated in the sauce. If the orzo seems dry, add some of the reserved sauce, a couple of tablespoons at a time, to taste.
Remove from heat and stir in the basil, the remaining 2 tablespoons of olive oil, and the feta. Serve immediately, passing any remaining tomato sauce at the table.
Debbie’s Tip: To make this dish vegan, simply omit the feta cheese. Without feta, this dish is a light accompaniment or bed for many of the heartier dishes throughout the book.

.
Do you have a favorite GREEK recipe? If not, you’ll have one after you make this! 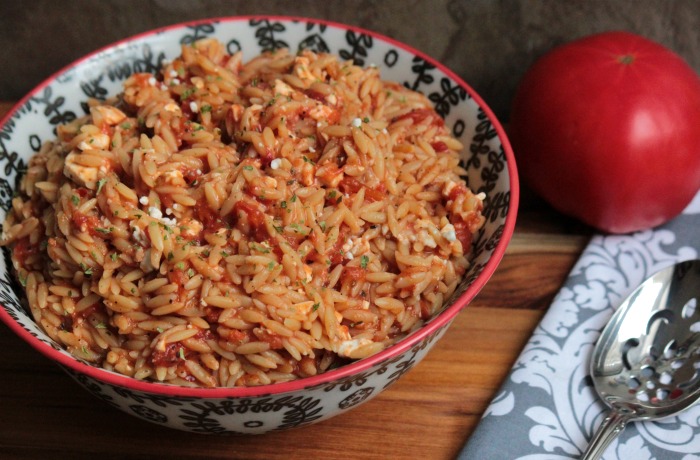