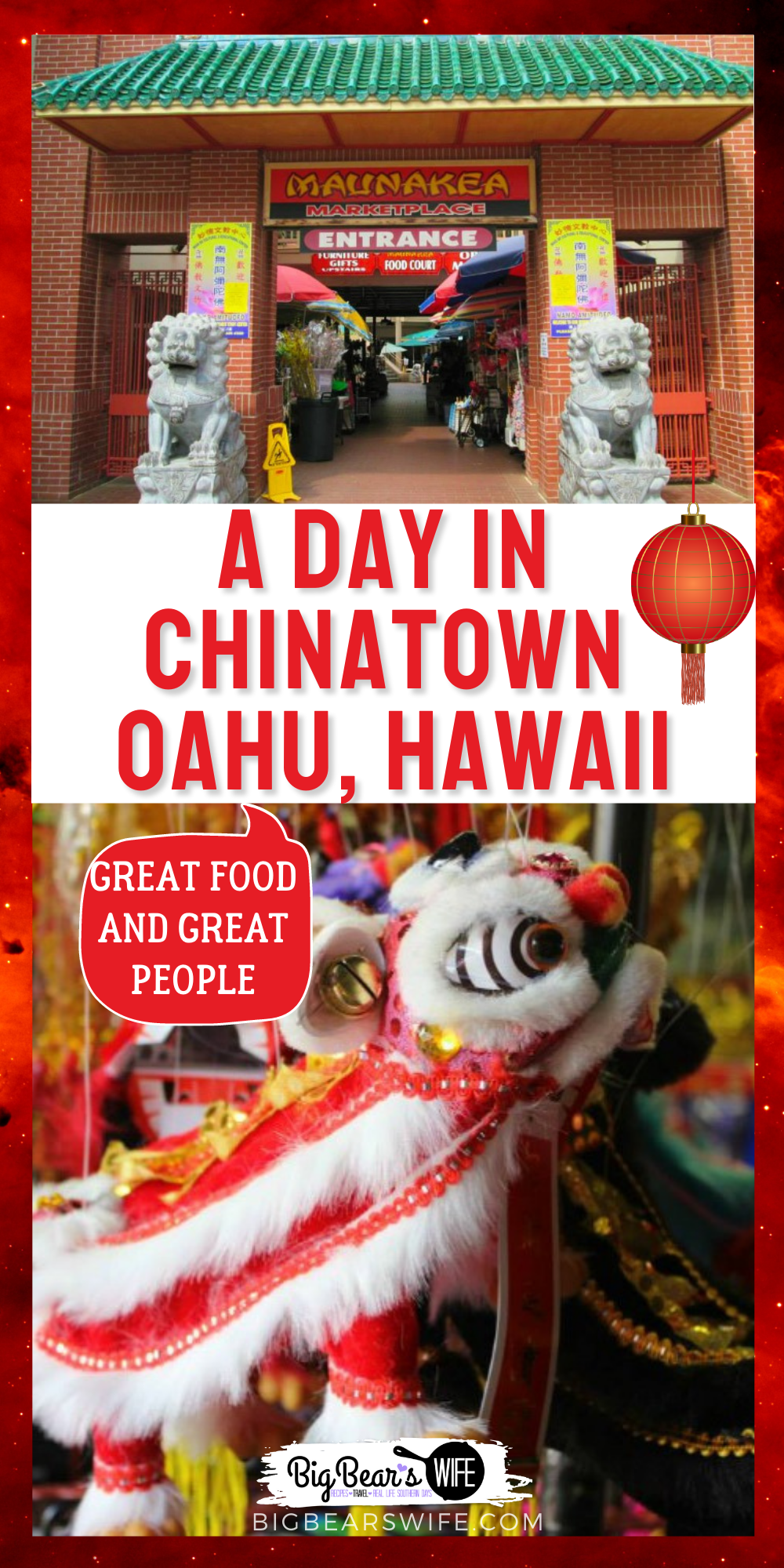 A day in Chinatown Honolulu, Oahu, Hawaii! We got a chance to visit Chinatown when we were in Hawaii for our Anniversary and these are some of the places that we were able to visit! Maunakea Marketplace,  Pork Hash,  Mai tai Soo,  Kekaulike Market and more! 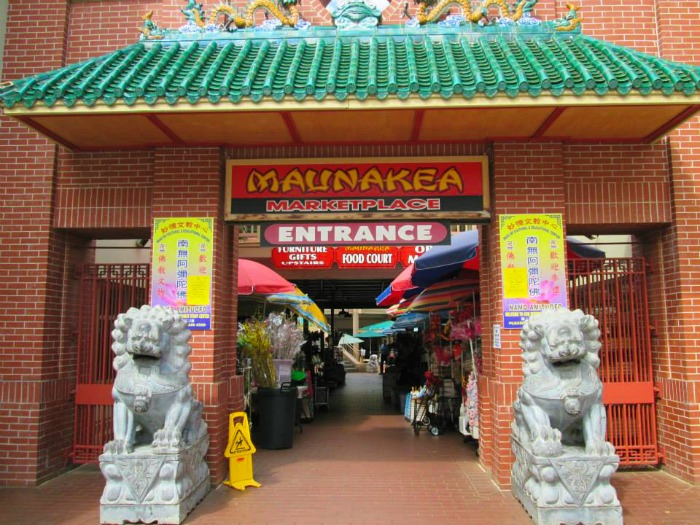 Well what can I say? I totally dropped the ball on writing about our trip to Hawaii. I started off good…I really did! I wrote about it a little while we were in Hawaii, I shared about one of our hotels and I even picked a food truck or two to blog about….all within a month of getting home and then I got side tracked. I got side tracked with this just like I do with everything else. I kept putting it off and telling myself that I’d get around to it and now 5 months later I’m finally getting around to writing a bit more about our trip. Hello? Are you still there? Did you get side tracked too? It’s OK! I forgive you 🙂 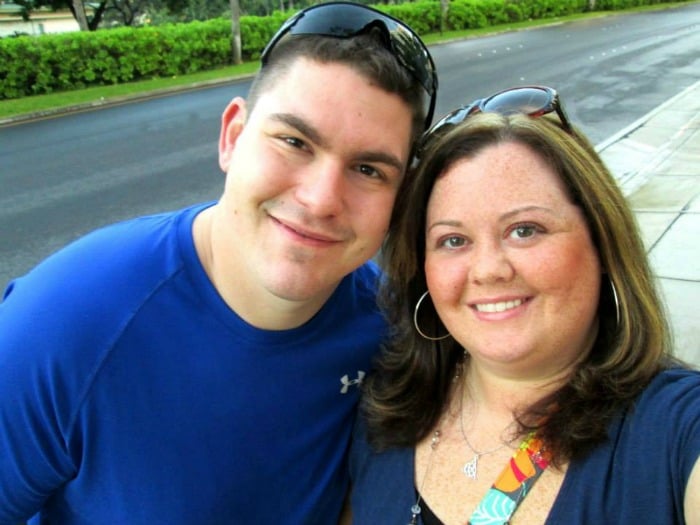 The 2nd full day of our Hawaiian adventures had us moving into the beautiful Hotel Renew by Aston (yes, we do tend to hop hotels on some of our trips) and making a trip down to Chinatown! We hoped on the bus and headed on over there! You can get a bus pass for about $35 from any of the ABC convenient stores and they are good for 4 consecutive days! It took us about 35 minutes to get from the east end of Waikiki to Chinatown but I was OK with that because I got to take in the sights and we got plenty of walking in while we were in Chinatown! 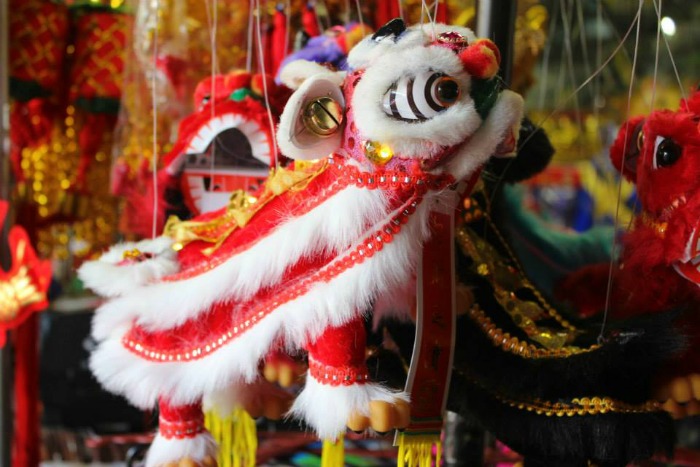 Our first stop in Chinatown was Maunakea Marketplace. There were little shops and food vendors everywhere. I am in love with that little red and white Chinese Lion and I really, REALLY regret not buying him! 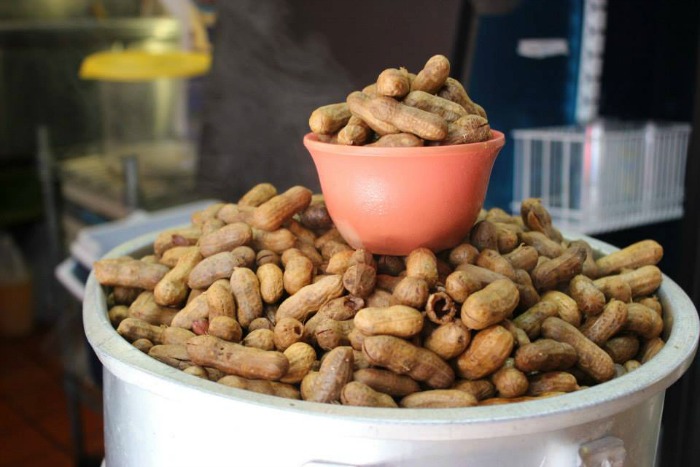 I also regret not buying some of these boiled peanuts! 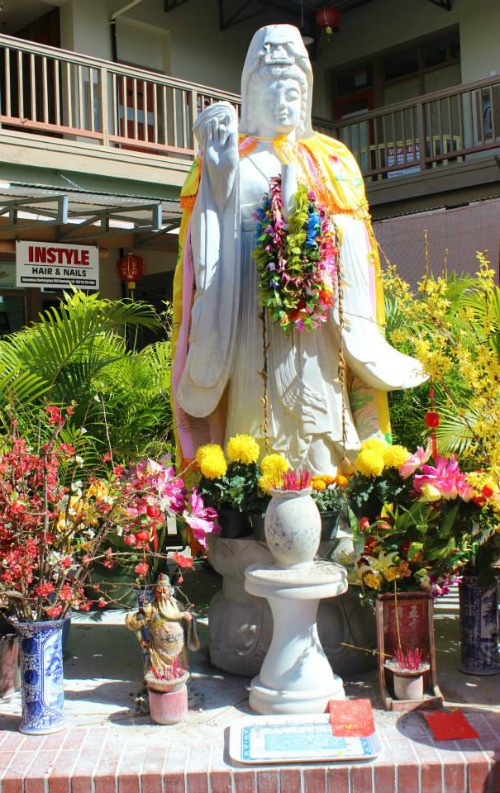 Right in the middle of the marketplace was this beautiful statue that was covered with leis and flowers with incense burning at it’s feet.  Does anyone know who this is? I’d love to know! I tried to look it up but couldn’t find anything! 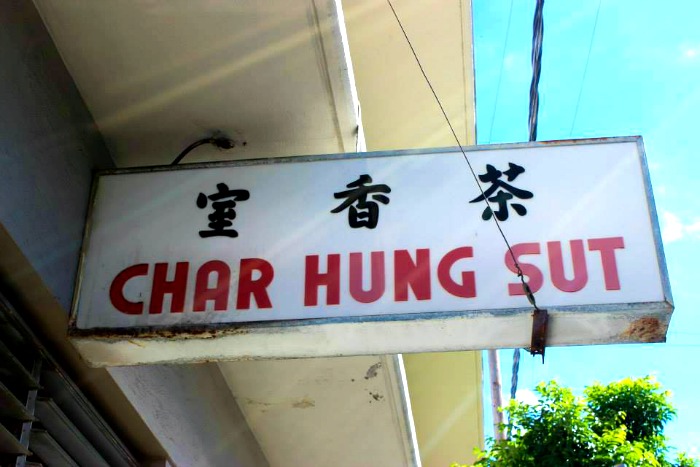 One of my goals in Chinatown was to find manapua! I heard from a few people that Char Hung Sut was the place to go and we were on the hunt! Sadly we got into Chinatown late so we got there right before they closed. They were all sold out of manapua but had a few other goodies that we tried, like the Pork Hash and Mai tai Soo. 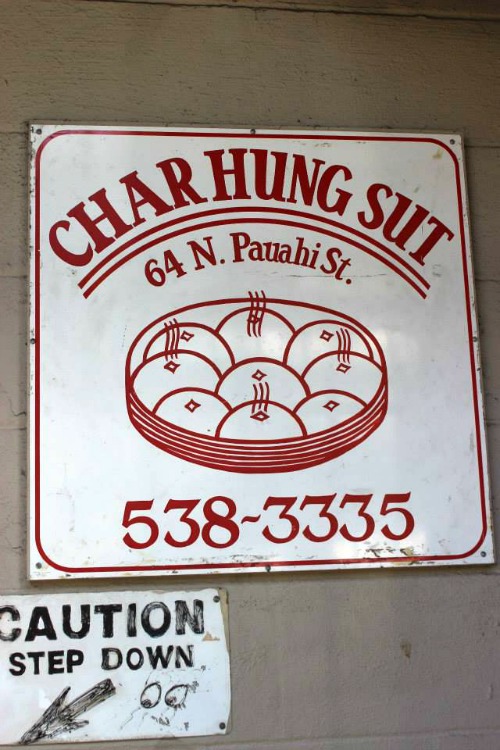 Next time I won’t miss out on your manapua, Char Hung Sut!!

So what’s next? Well, we heard from another source that there was a bakery a few streets over that sold manapua! So that’s where we went! We walked a few blocks over and found Regal Bakery! Ok, now I know, we’re in Chinatown and I’m stopping at a donut shop. I can’t help it! I was enticed by the promise of manapua!

We found manapua but it was baked; I was on the hunt for steamed manapua! However, I couldn’t just leave empty handed! Oh no… I mean DO YOU EVEN KNOW ME? I had to get something….. 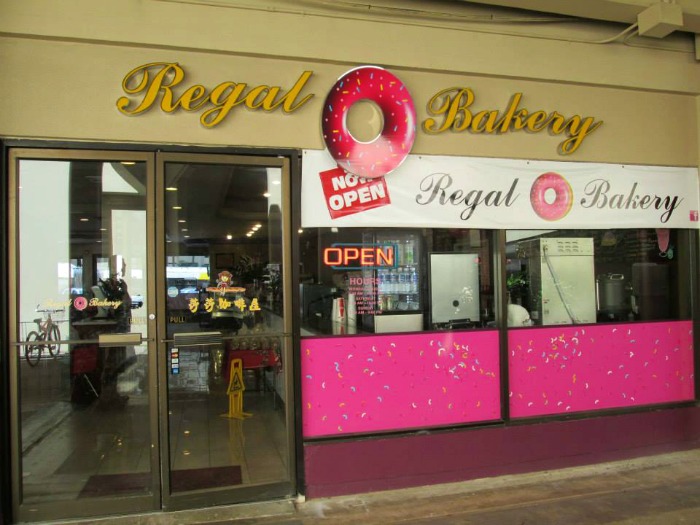 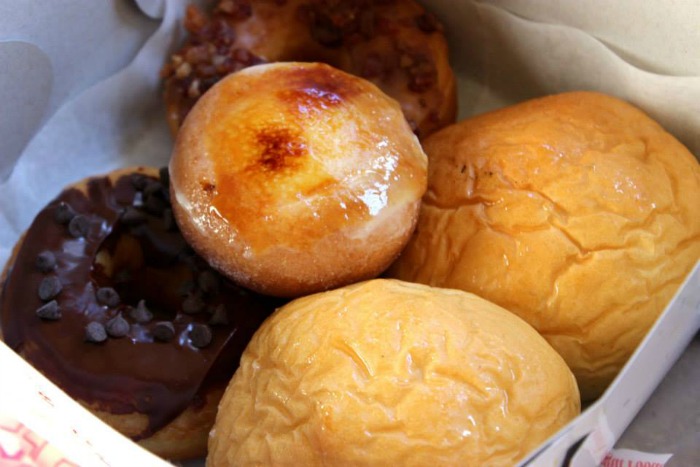 On the left there is a chocolate glazed chocolate chip donut, on the top right there is a maple bacon donut and the other two items are baked manapua! 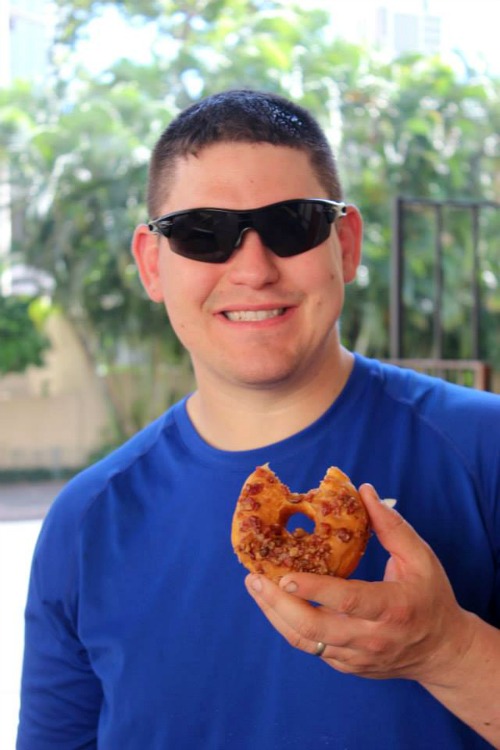 I still don’t know if I’m a Maple Bacon donut fan but Big Bear loved it. I tasted it and it was good but I think I’ll stick to my chocolate glazed donuts!

After a quick donut break we walked back over to the market. Now while you’re in Chinatown beware that there aren’t really any public restrooms. So, if you find yourself in a predicament and need to use the rest room there is a Catholic Church there a few streets over from the main area of Chinatown that has a building beside it (like a fellowship hall) that does in fact have clean bathrooms for the public to use.  The name of the church is Cathedral of Our Lady and the people there are amazingly sweet.

Oh and by the way if you happen to walk in while they’re having a lunch event they’ll insist that you take a boxed lunch even if you insist that you are full. So when this happens, just thank them, leave a little donation for this kindness and once you’ve left the church just give your little boxed lunches to the next homeless person you see. Believe me there will be a homeless person close and they’ll be very thankful. (Never in my life have I seen more homeless people, I swear they were all over Honolulu) 🙁 Makes me so very sad. Thomas had to stop me from buying food for every homeless person I saw. 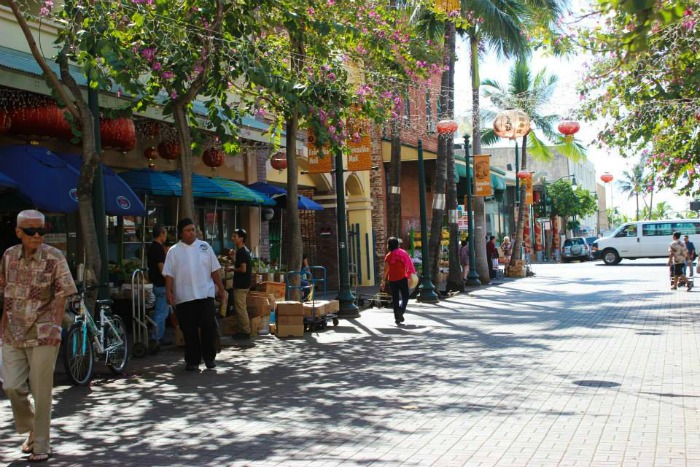 So now that you know where to get cute little Chinese lions, pork hash, delicious donuts and the location of the Cathedral of Our Lady, let’s move back over to the Kekaulike Market.

While you’re in Chinatown you’ll notice that there are boxes and boxes of vegetables, fruits and fungus!!

WAIT… WHAT? Yep… haha lots and lots of boxes of fungus 🙂 It was totally a “Fungus Among Us” moment. 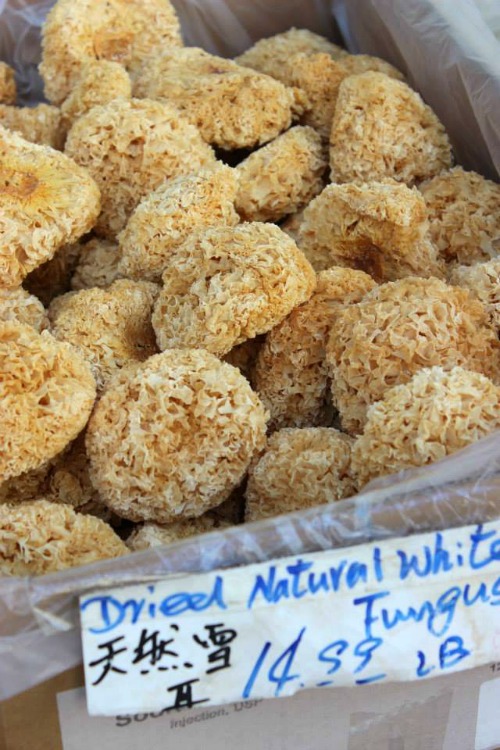 I’ve never cooked with dried white fungus but I totally would… I think… haha. I’m always up for trying new things 🙂 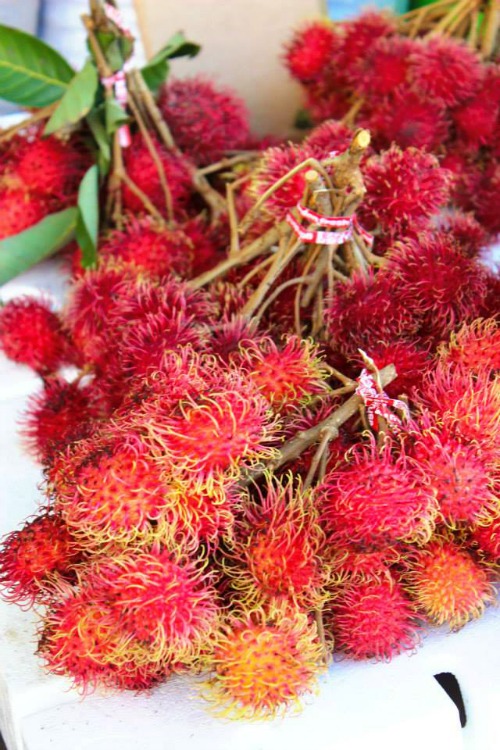 So look at these!! I finally figured out (thanks to Facebook) that these are lychee! I wish I had known what they were when we were in Chinatown because I loved them. Well, I loved the look! I didn’t buy any because I didn’t know what they were, oh by every time we passed them at a fruit stand I had to stop and snap their photo!

I tried to find out from two of the vendors working and well, they either didn’t speak English or just didn’t want to speak English to me so I was left in the dark. Unfortunately I don’t speak a lick of Chinese. 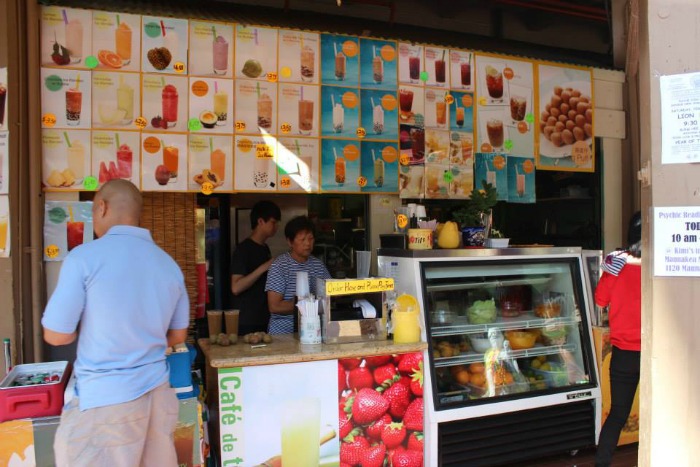 I kept asking what the black dots where in the Bubble Tea and the only answer I got was “Bubble Tea, it’s good”. Yeah…. haha

So turns out that the black pearl looking things in Bubble Tea are tapioca pearls. Well then… I’ll have to remember that when I go back! Sorry I wasn’t to keen on getting a drink with little back dots floating in it if I couldn’t figure out what they were haha. 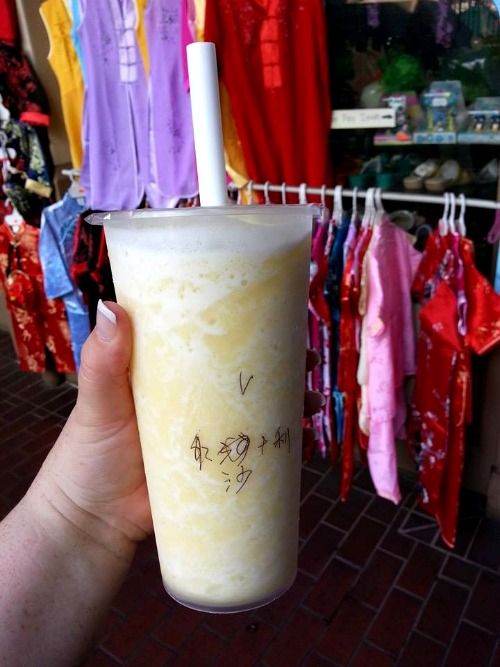 Oh and they do the coolest thing to them! They vacuum seal the top after they make it!! You have to jab the straw throw though the sealed plastic to drink it. Total awesome for keeping the bugs away and keeping the drink fresh in case you wanted to take it with you and not drink it at the moment (you know um… like if you lived closer haha) 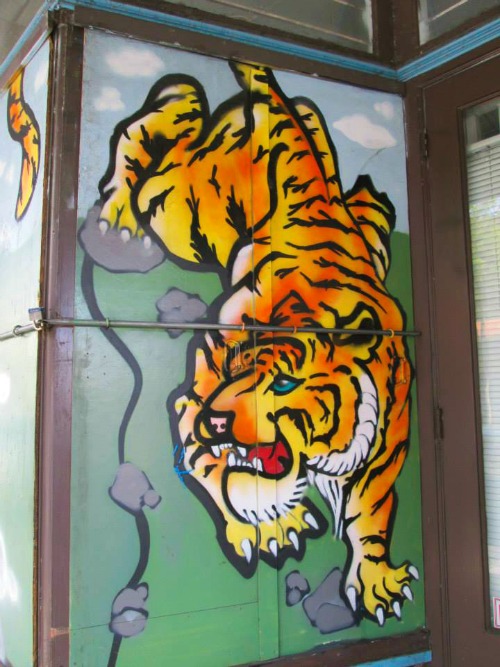 One last thing! I just wanted to show you this tiger! I especially loved all of the random art work we saw when we were in Hawaii. It was everywhere!

So if you go to Honolulu, Hawaii please take a day to go down to Chinatown! Maybe go on a week day though, we went on a Sunday and while there were lots of vendors set up some things were closed.

I’m putting a map below of everywhere we went in Chinatown!