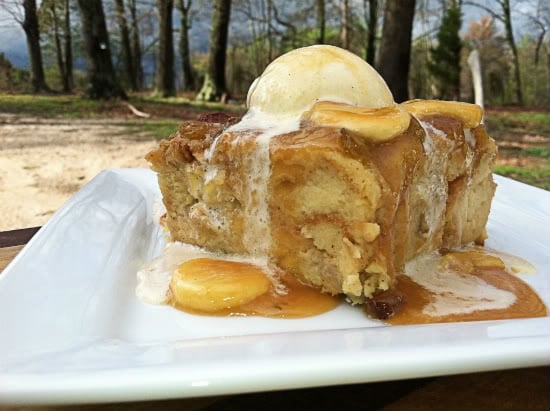 Food is an obsession of mine. Good food that is. You can keep the bad, gross kind 😉

Over the past 10 years, my relationship with food has gone from one extreme to the other.  When I was 16 I hated food. I hated it because food “made you fat”. (Did you know that when I was 16 it only took 1/2 of a cheeseburger to fill me up, that is all I could eat with out feeling like I was going to explode). As I traveled more I started to try different foods and started to embrace it a little more. When I got married I went into full housewife mood and wanted to cook everything. I felt like it was my purpose haha.Big Bear and I were trying new restaurants together, we were challenging each other to eat different things. “I’ll eat this calamari if you eat that spinach”. My taste in restaurants and foods went from Bojangles and Blue Box Mac and Cheese to WolfGang Puck and BreadPudding. Which led me to want to try everything….at least once.

What does that have to do with Pineapple Banana Bread Pudding with Banana Caramel Sauce?Everything!

Had I not started expanding my love for food, or been willing to try new foods, I never ever would have eaten anything called “bread pudding”.  Pudding made from bread… that didn’t sound good at all. Sorry. But it didn’t. But I know now, that isn’t really what bread pudding is. 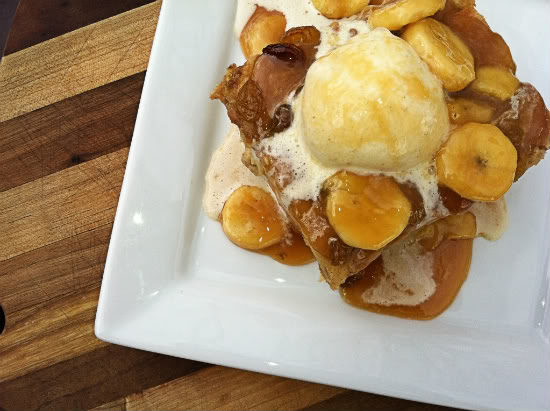 One of my “Fancy” local restaurant favorites, was a place called The Yancey House. We went there for almost every holiday. It was the first place I had lunch with Big Bear’s Grandmother, the first place I tried antelope, were our cousins had their wedding reception and a spot for many family dinners. They bought almost all of the food locally and the food was just fantastic. I even made it a rule that we had to go out for Mardi Gras, just so that we could go there for New Orleans/Creole food. I loved it.

They had a dessert called Jack Daniels Bread Pudding. It became a favorite of mine. I literally had it everytime I went. I loved it so much that I e-mailed the chef and told her how much I loved it, and what do you know she e-mailed me back with “I’m so glad you liked it– here is the recipe”. .I was happier than a pig in mud. Wait…. does anyone really say that anymore? Probably not. But I’m so glad that she sent me that recipe because a few months ago they closed their doors for the last time  🙁

When I was at Walt Disney World for the Food Blog Forum Food Blogger Conference, we went to Ohana for dinner one night. ( a recommendation from Chris, Thanks!) *It’s one of the restaurants at Disney’s Polynesian Resort.* After one of the most massive dinners ever, they twisted our arms and forced us to have dessert. 😉 Which was a Coconut Pineapple Bread Pudding. It was one of those moments where you take the first bite and Disney Fireworks explode around you. yeah.. ok for me it was. So what do I do when I have something in a restaurant that I just must have again? Make it at home of course! Plus since BigBear couldn’t come on the trip with me, I had to make it at home for him to try. I don’t’ think that they would have taken to kindly to me stuffing a whole tray of Coconut Pineapple Bread Pudding into my purse. 😉 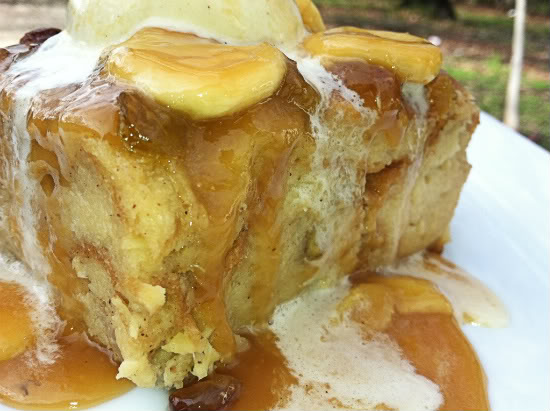 I have no idea what Disney’s Recipe is, but this is my take on it. I used the basic steps from the Jack Daniels Bread Pudding and went from there. Oh and mine has no coconut in it. We’re not really a coconut loving family, so I switched and used Bananas instead as my second flavor. I think that I actually like mine better. 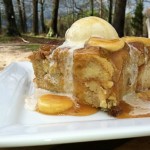 My version of the Coconut Pineapple Bread Pudding from Ohana at Disney's Polynesian Resort. 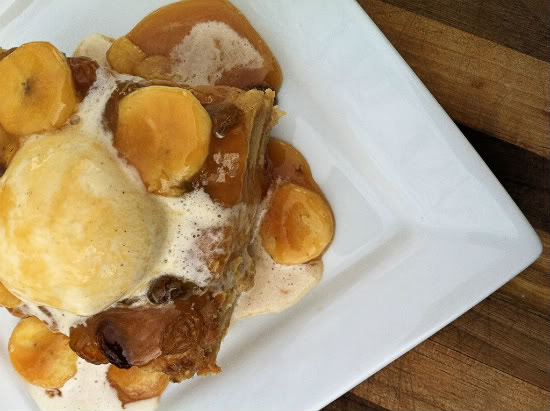