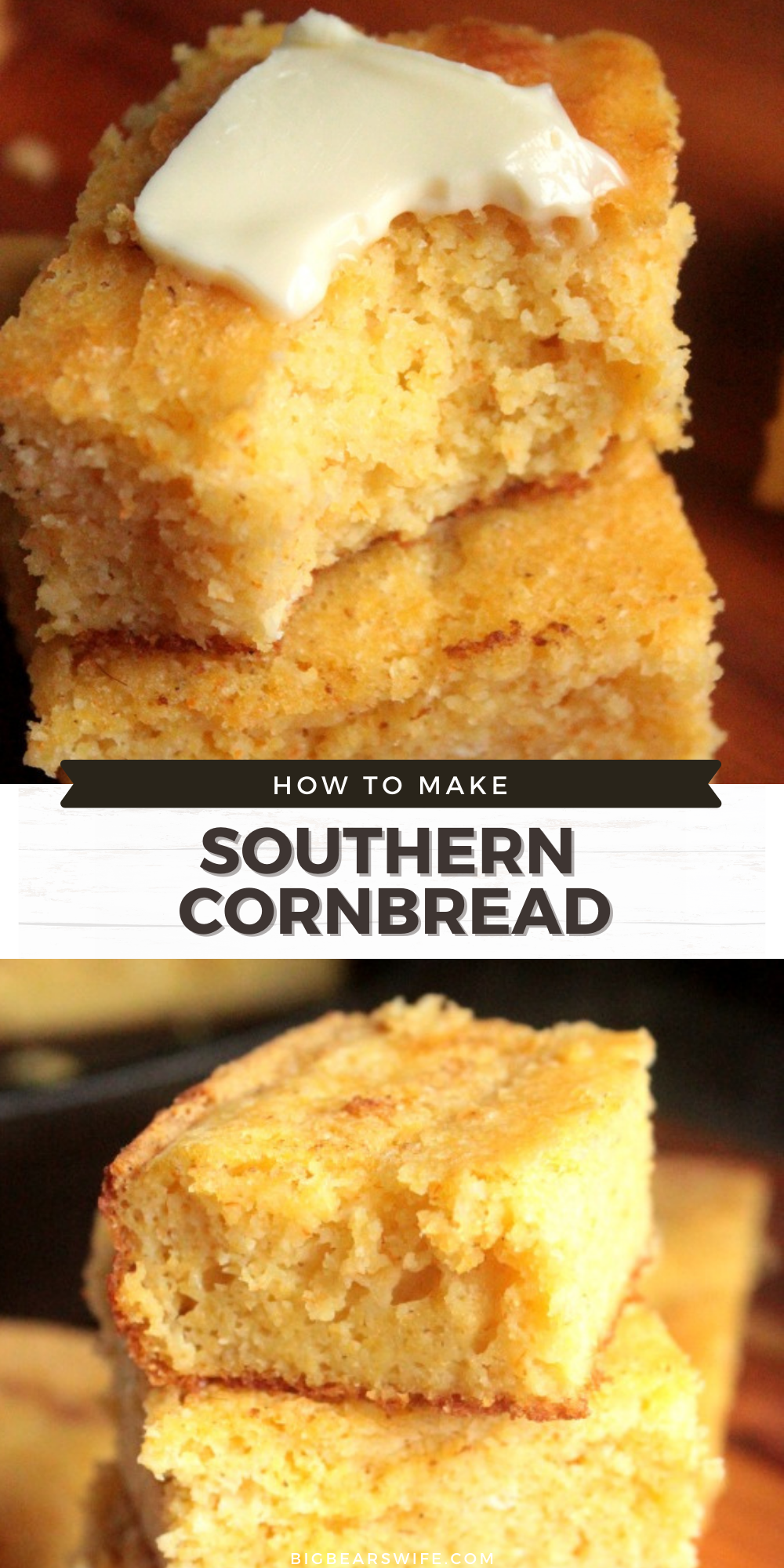 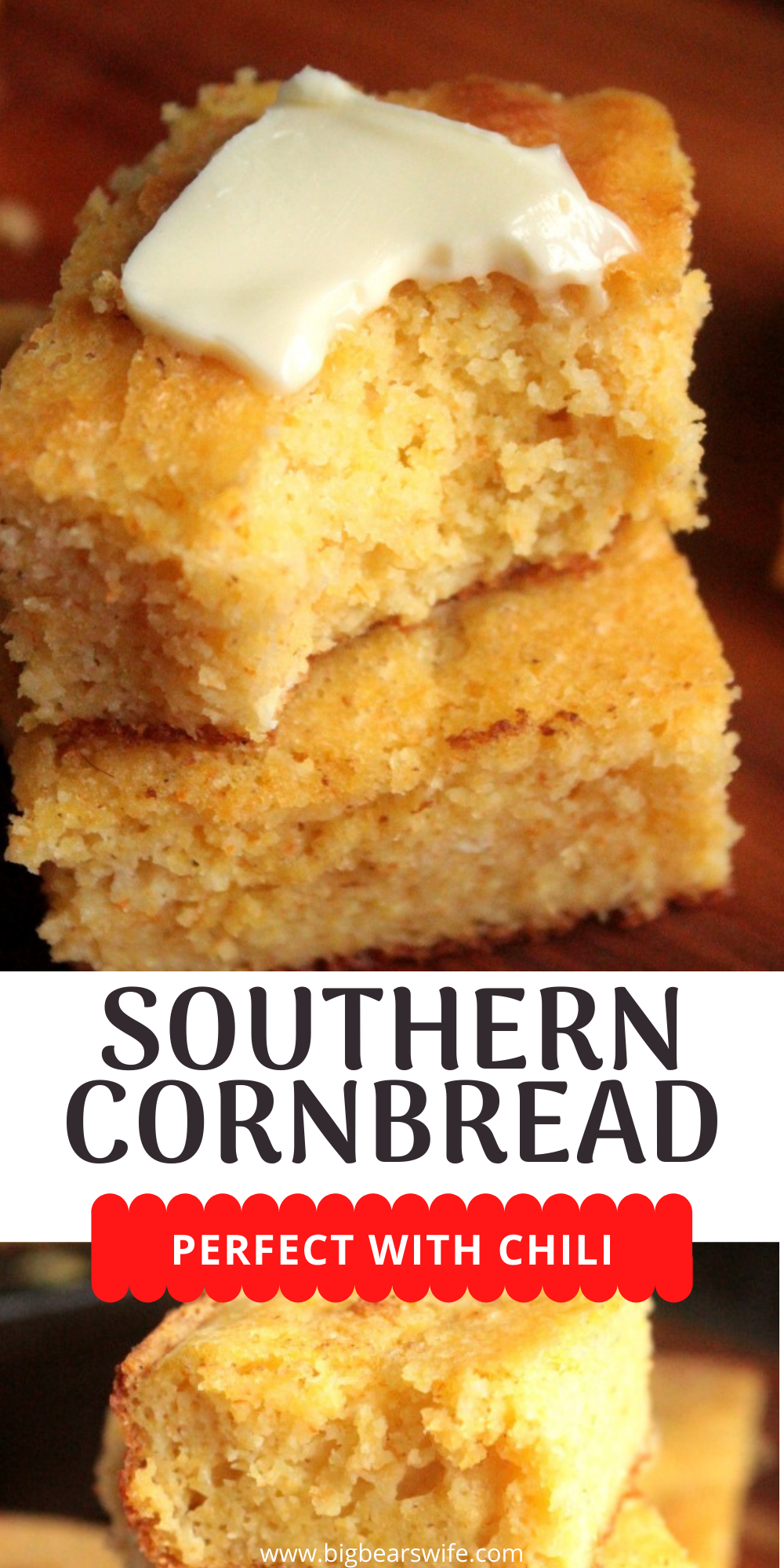 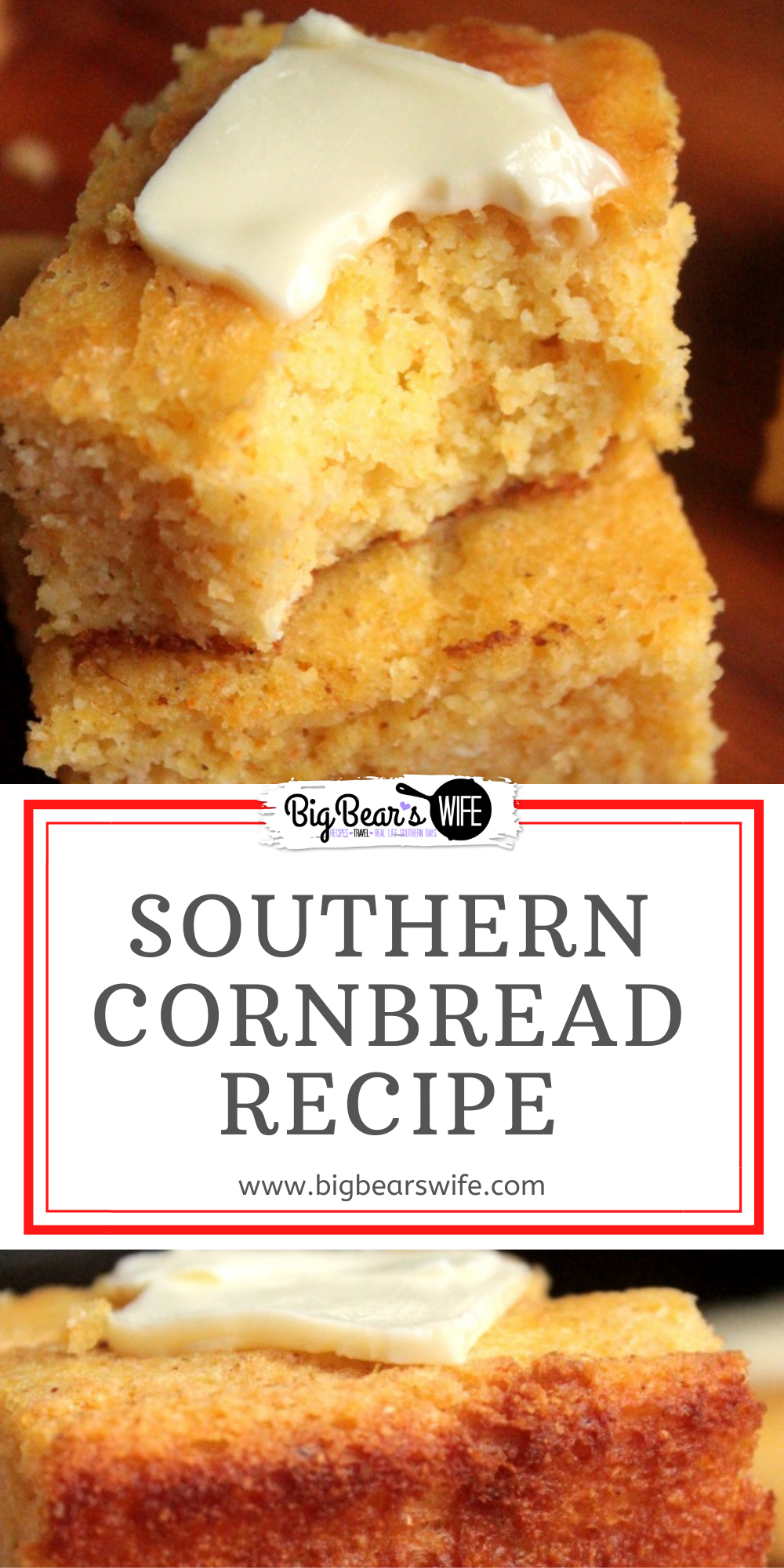 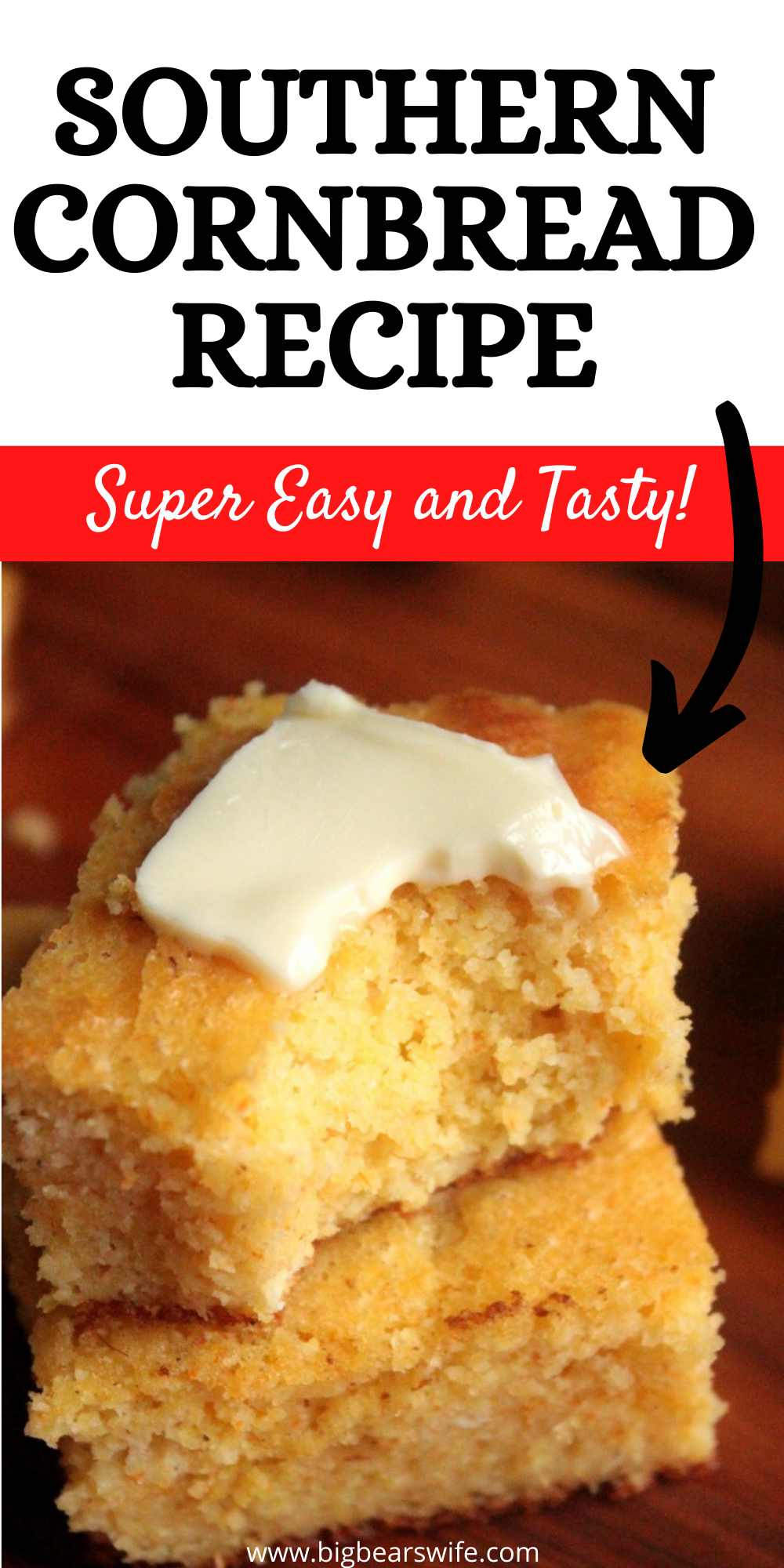 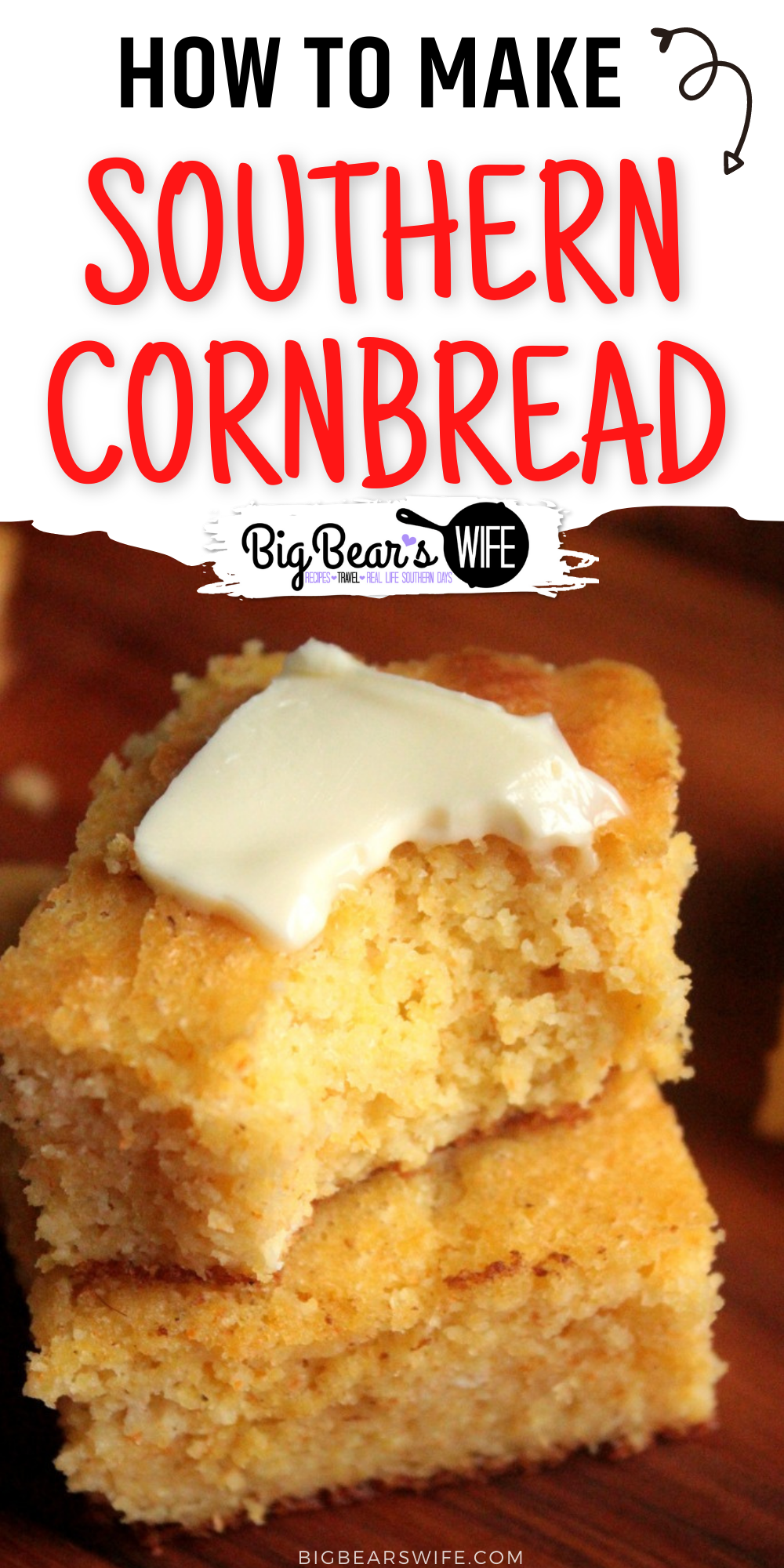 There is just something warm and comforting about a plate of warm southern cornbread and a softened stick of butter sitting on the table. This recipe is our favorite cornbread recipe! 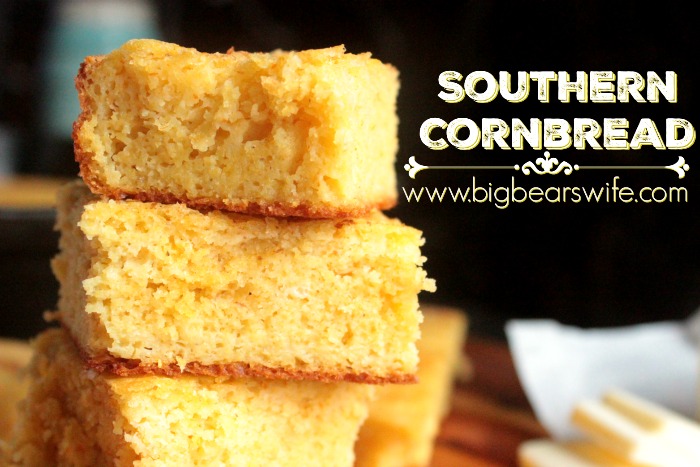 It reminds me of cold evenings by the fire with a big bowl of homemade chili but it also makes me think of warm southern evenings outside by the grill with pulled pork and baked beans.

Although both visions are wonderful, I’m kind of stuck on the cold evenings right now, mainly because it’s all of a sudden freezing here.

We went from a warm and sunny Christmas holiday to a rainy and cold couple of days right before New Years. What a change! I was going to wait and post this at the beginning of the year since BigBearsWife.com is going to be taking more of a southern turn in the new year but I know that a lot of people have cornbread with their traditional southern new years meal so I thought that I should go ahead and post it. 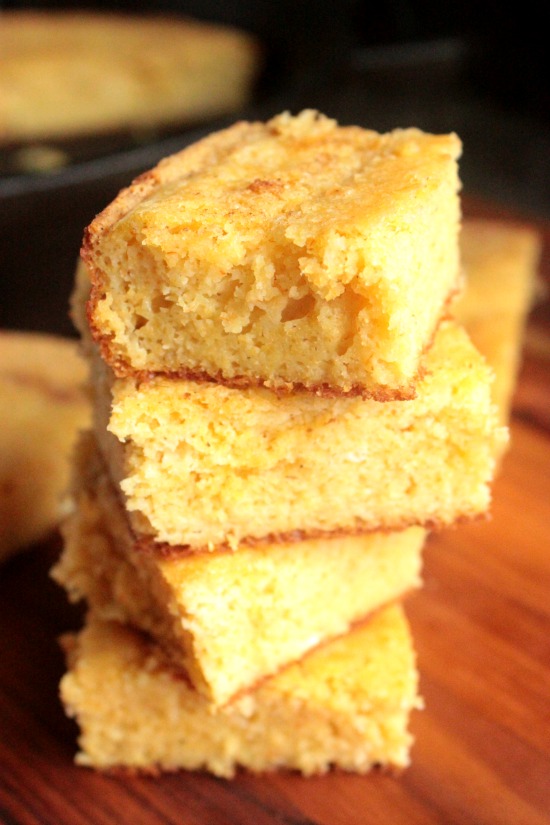 The rain is pouring and the wind is making it a little chilly in the evenings so to warm us up I started to work on some cornbread the other day. Big Bear was making homemade chili and I had plans for slow cooker beef stew the next day so I figured that it was about time for southern cornbread to make an appearance in the kitchen….and by cornbread I meant the real stuff, from scratch. Not the boxed cornbread mix.

Now there isn’t anything wrong with the boxed cornbread mix. Heck, we used it for YEARS.

However, now that I’m kind of perfecting our own homemade southern cornbread…well I might not be using the boxed cornbread mix for a while. 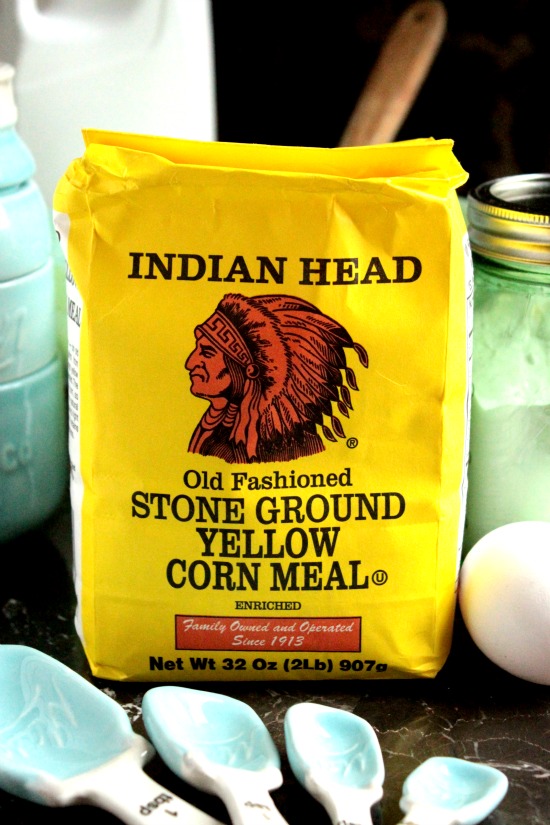 Speaking of perfecting our own homemade cornbread….who knew that it was be so hard to get the right combination for great cornbread.

I had read so many recipes and cookbooks while consulting my grandmother’s recipe cards, I thought that it would be a piece of cake. I was mistaken. While I did end up coming up with a fantastic southern cornbread recipe that we’re probably going to use from here on out, it took a few trials and errors. 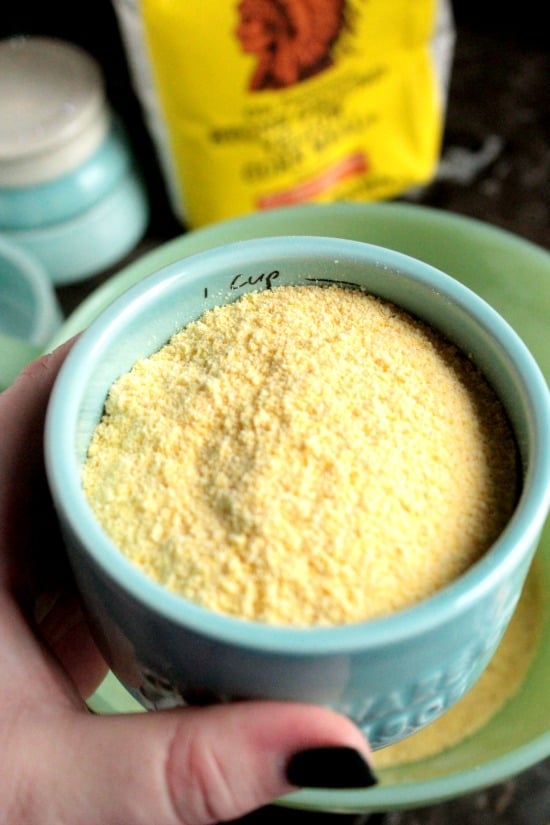 The first batch I made had way too much cornmeal. I kept reading that “true southern” cornbread doesn’t have flour. Well…..let me tell you something, corn bread without flour is dark, weird and taste like a dense sponge. Sorry but that isn’t ANY kind of cornbread that I’ve had in the south.

But if you like it like that, be my guest haha. I’ll be over here adding flour to mine. 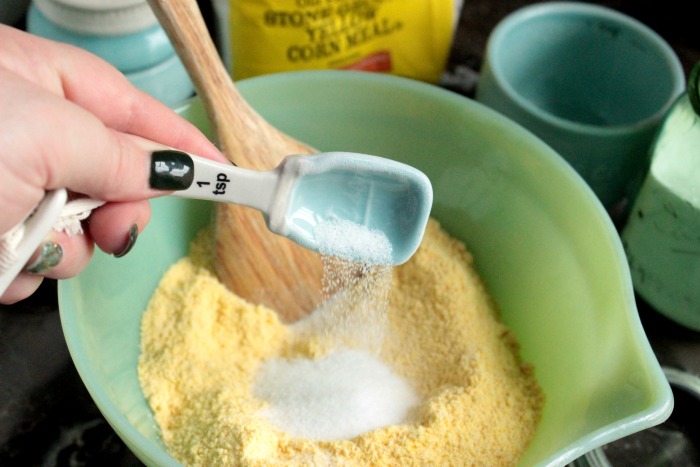 Next, the debate and trial of cornbread with sugar came about. At first I was totally against sugar going in the cornbread.

I just knew that I didn’t want sugar in there, well until I made a few batches without sugar and realized that I was missing that little kiss of sweetness.

Back to the drawing board for me. 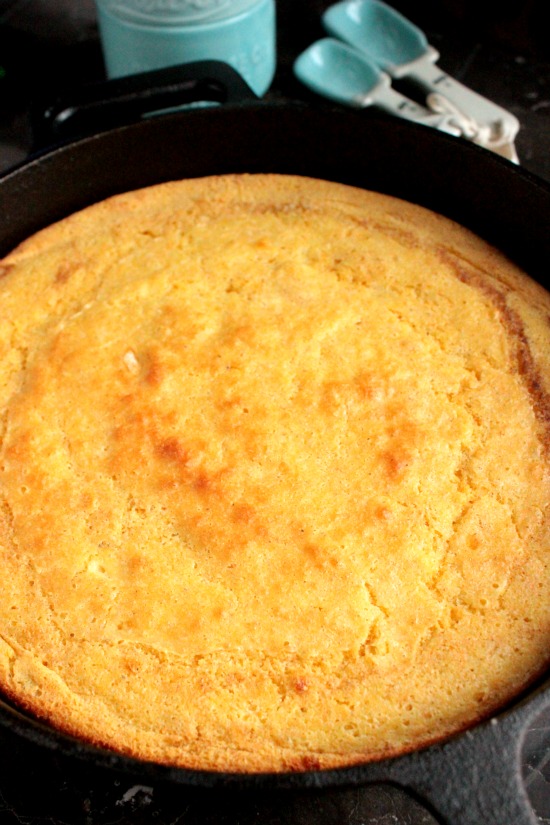 Finally, after corneal and flour combinations, switching the oil out for real butter, adding sugar and an extra egg, we had a winner. 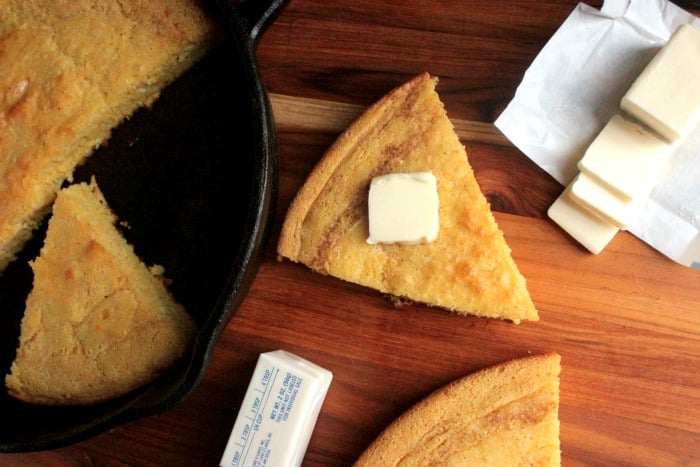 It’s got a crispy browned outside while the inside is dense but soft. It crumbles just enough but not too much and it has that little kiss of sweetness.

Slice it hot and top it with a pat of butter for a bite into cornbread heaven. <— ok maybe that was going too far but you get the drift. 😉 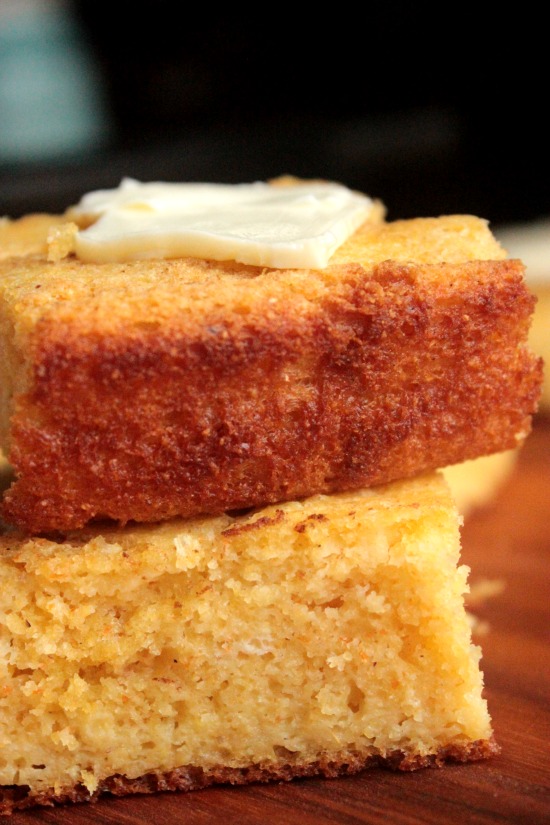 I prefer making my cornbread in a cast iron skillet, mainly because I love the crispy brown crust that I get from adding the batter to a hot skillet and well because it’s cast iron…haha who doesn’t want to cook with cast iron. 😉

Even when I use to use the boxed mix, I wanted to cook my cornbread in cast iron. I just think it makes for a better cornbread. 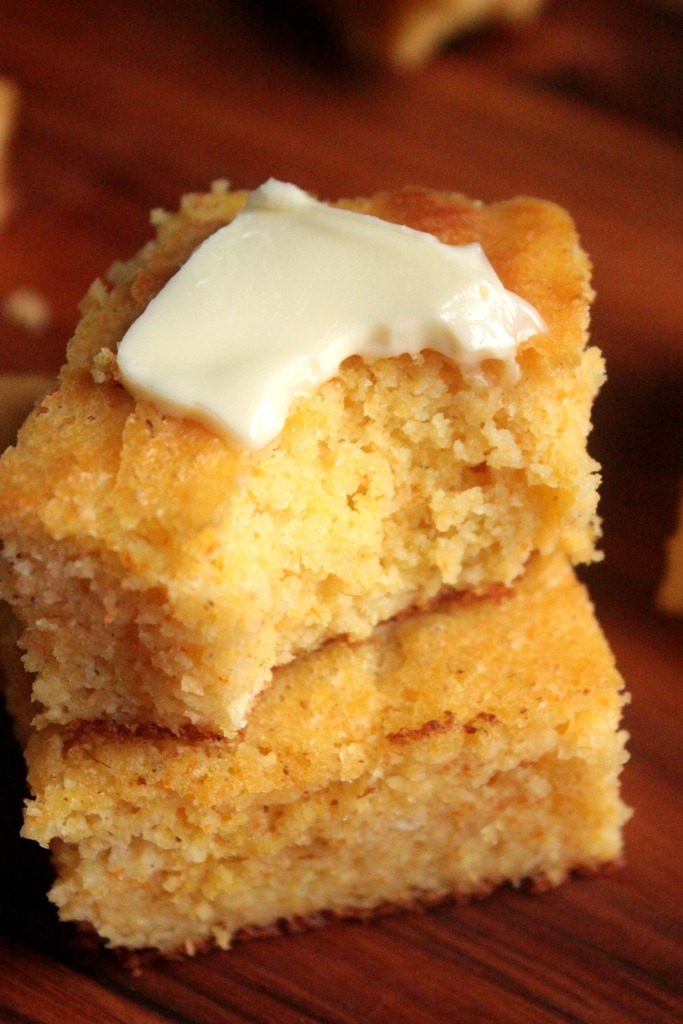 , you know, those cast iron pans that look like they have little slots for ears of corn, those things can be found in almost every antique shop out there. 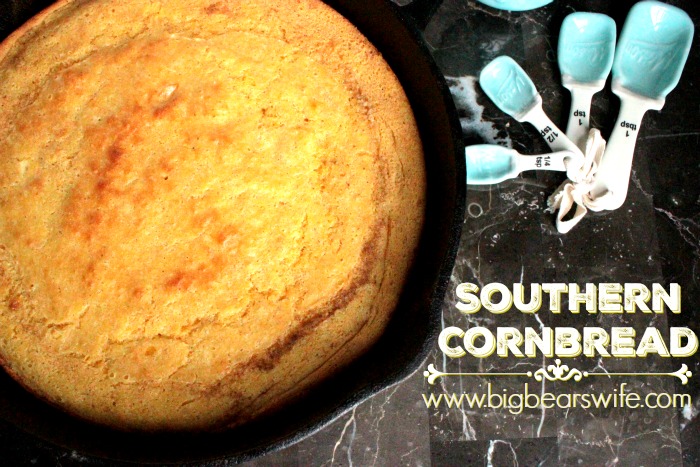 So until I find a cast iron muffin tin to invest in I’ll probably just stick to corn bread in a cast iron skillet.

If I make it in the cast iron skillet I can at least cut it into triangles or squares because if I can’t have my cornbread in muffin form I want it in squares! haha. 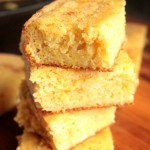 There is just something warm and comforting about a plate of warm southern cornbread and a softened stick of butter sitting on the table. 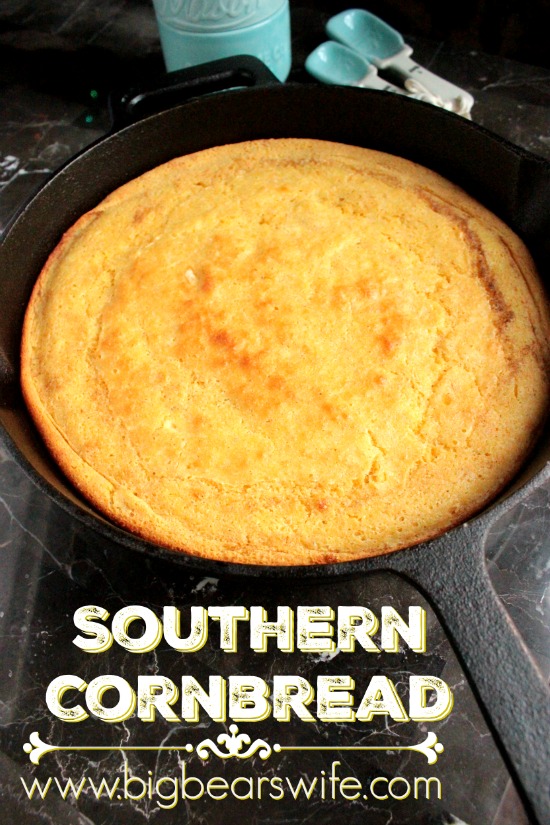