I know I wrote a lot… but We totally won the Food Lion’s 2013 Roanoke Frugal Cook-Off AND I’ve got a giveaway at the bottom so don’t run away! 🙂 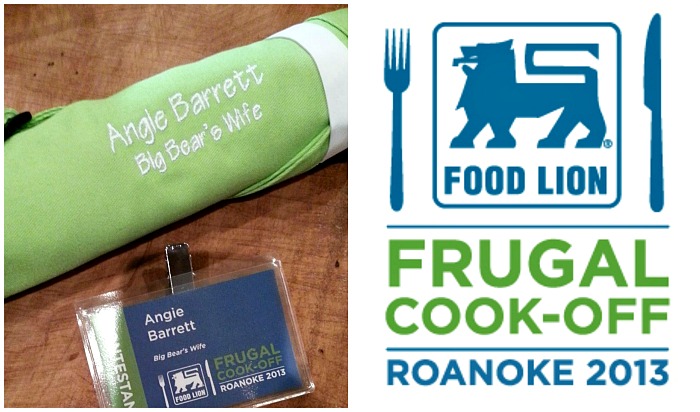 On Wednesday, Meghan, Mom and I packed into the car and started to make our way to Roanoke, VA. It’s only about 2 hours from us and I’ve traveled those roads many times before in order to make trips to the VA Hospital for BigBear and to see my friend Liz, so the travel wasn’t such a big deal. The reason for the traveling was. It just so happens that a few weeks ago, I accepted an invitation to participate in Food Lion’s 2013 Frugal Cook-Off in Roanoke, VA. 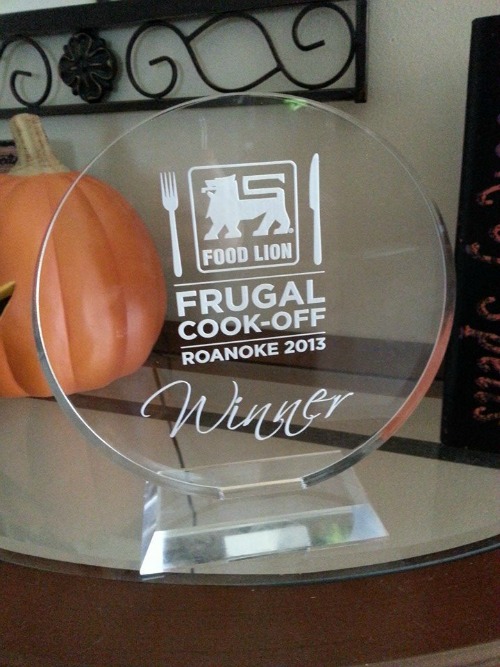 I had been recommended by my sweet friend, Liz, and for some reason I thought this cook-off would be a great idea. That is until I hit the send button on the e-mail that confirmed my attendance. That’s when the full blown panic set in. What did I sign up to do? What was I thinking? I’m going to burn the place down by accident? What’s wrong with me?!

The next week or so was filled with activities that kept me busy but still in the back of my mind, I knew that this cook-off was going to be the end of me. Surely I’ll just pass out as soon as it starts. So what’s a girl to do? I had no idea of what would be there as far as food goes, all I knew was that we’d have 45 minutes to create a winning dish and I’d only have $15 to spend. I had to cook a dish for 5, in 45 minutes for under $15.00… help!!

But I wouldn’t be alone. I’d have a team. A team of 4! OK, well that makes it better right? Oh but then it turned into teams of 2! OK… still better than being alone. I’ve got this. I’ll get someone that had a game plan too right? We’ll compare ideas, we’ll be ok. So I sat down and started to come up with a game plan? How in the world would I win a cook-off? I have literally always said “I could never do something like Chopped, because I’d freak out”. <— I like to torture myself obviously. 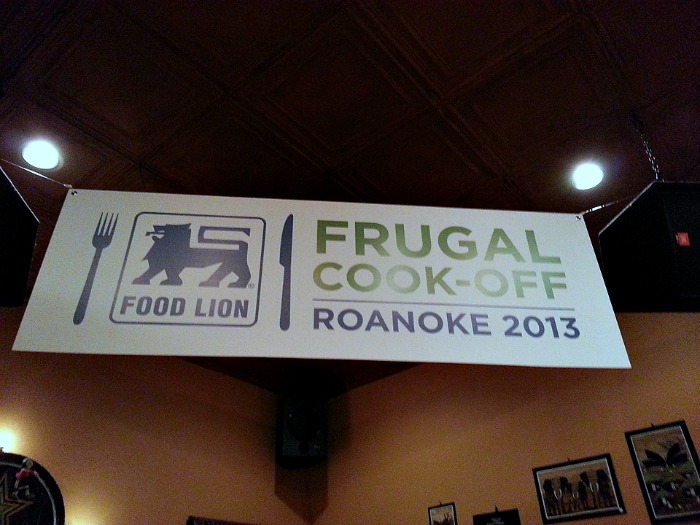 The night before the cook-off Big Bear and I headed out to our local Food Lion. I had an idea in mind so I needed to price check things! I gathered up everything I need and checked over my prices, I was under my $15.00 limit. YES! Ok, now I just needed to get home and make something happen… in less than 45 minutes. We got home, I set everything out, started a timer and BOOM I went into cooking mode and 30 minutes later I had a Brown Butter Chicken Pasta that was “to die for”. It was so good. A little but of confidence started to creep back into my life. Now I just needed to hope that they had Chicken, Pasta and Butter there! I went to bed with a full tummy but was still in freak-out mode.

Cook-off day arrived and with it a whole new flood of panic. haha Holy Moly, what was I thinking?! <– that was pretty much my quote of the day.

We made the drive to Roanoke and got there super early. I checked out the restaurant location for the cook-off and then we headed downtown to walk around and kill some time. We made a quick visit to Chocolate Paper and then had an early dinner at Blues BBQ. I knew I needed to eat something before the competition or I’d really not make it through. 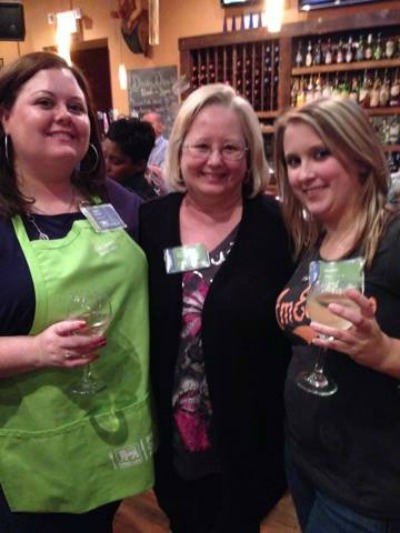 5:45 pm Rolled around and I knew that we needed to start heading over to The Fork in the City for the cook-off. Tummy is totally doing flips now. We arrive, we walk in and there are people, lots of people! Heart has literally stopped now. Thankfully though, I look up and My friend Liz and her husband are there! So, I smile, sign in and take my apron. a few hugs and a glass of wine later and I’m at least breathing normal again. 🙂 Oh and I even got my own personal 2013 Roanoke Frugal Cook-Off apron! 🙂 I love it!

Then, I met my partner. Elizabeth from E, Myself and I. Elizabeth seemed sweet, she looked normal (I was worried about being stuck with someone weird haha) and the first words out of sweet Elizabeth’s mouth? “I don’t cook” (Or it may have been “I don’t know to cook”) <– which ever it was, it was enough to send my little confidence bubble into the flaming pits of hell. haha I thought, this is the end, I’m done, I shall not win. haha.

(Oh, before anyone freaks out, I was totally not mean to Elizabeth, she actually turned out to be the best cooking partner that I could have asked for. I dished out directions and she followed them to a T. She was the best! But I won’t lie and say that I didn’t panic haha)

We listened a bit about Food Lion, their brand and the new packaging for their beef (which I love by the way, pretty much no more white Styrofoam containers and plastic wrap!) 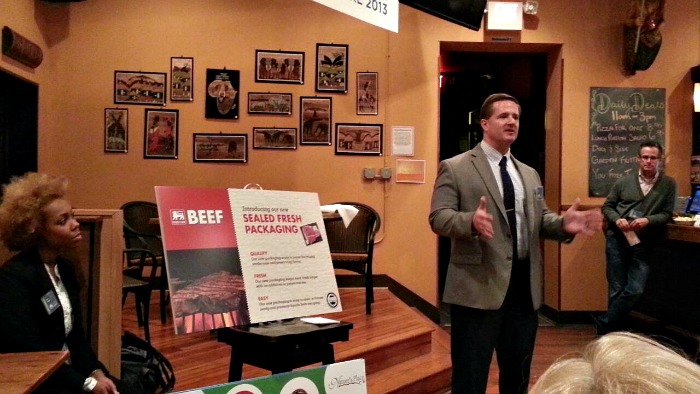 Then they announced that we would be cooking with Beef…….. OH NO, I cook chicken, I don’t cook beef. Big Bear is the beef cooker! Ok, maybe I’ll still survive. “You’ll need to make 1 entree and 2 sides” OH NO…. my dish I did a test run on was 1 pasta dish, as in everything combined! haha.

Then we had to select our mystery cut of beef. I went up, picked out my plate, uncovered it..”Stir-Fry Beef…. well at least I didn’t get a huge steak.:)

We were then given ten minutes to shop! Elizabeth and I did our “shopping” in about 30 seconds haha. Then we set up at our work station, pulled our hair back and washed our hands. 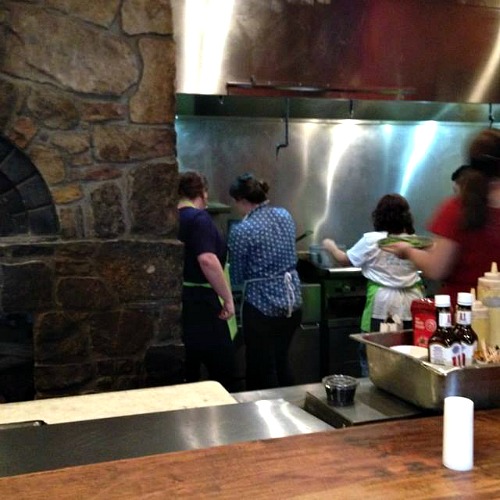 As soon as they said go, we got to cooking. I made a be-line for the stove and got my pans on two of the burners (there were only 4 burners) I knew that I needed them for my dish and that if I didn’t get them we would totally loose.

We started cooking, I took care of the pasta and veggies and Elizabeth took care of the beef. With 5 minutes to spare we plated our dish and when time we done we threw up our hands and crossed our fingers. 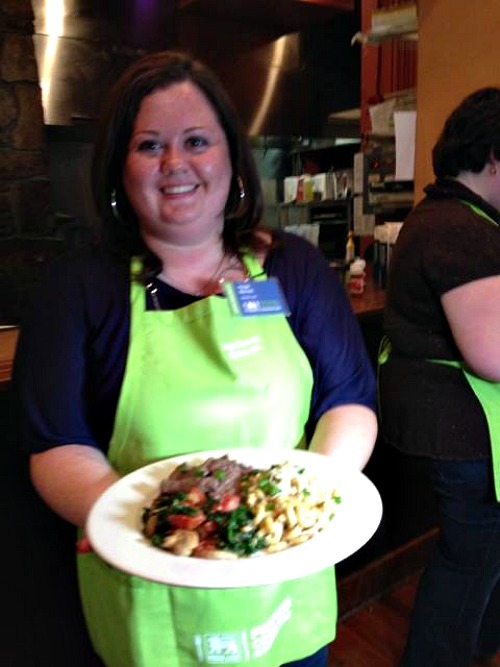 Each team went out and had their dish photographed and then we had to plate 5 smaller dishes for the judges. We made Stir Fry Beef and Brown Butter Pasta with a side of sauteed Mushrooms, Tomatoes and Spinach! (I’ll have the recipe on the blog later!!)

It was down right delicious! We came out of the kitchen and even the staff that works there began the “oh I want to eat that one” & “ooo man that looks good!” YES! Keep the compliments coming ya’ll! haha

Each group went out, told about their dish and then the judges did their thing. 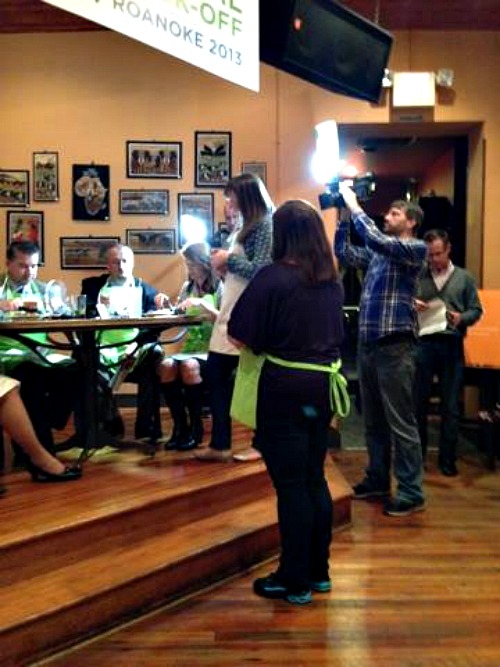 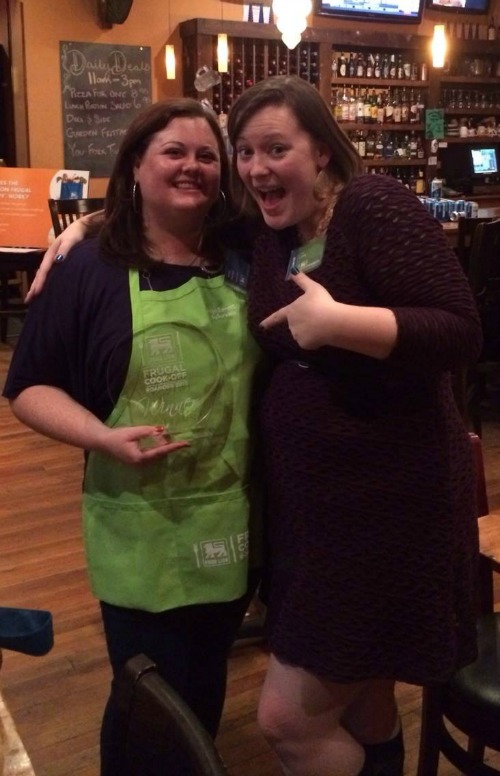 But yes, we had won! We had used 6 of the Food Lion “My Essential” brand items in our dish and our dish had only cost $13.76 (not including the beef). The judges loved it!

We accepted our gift-cards, a Food Lion goodie bag and then we were presented with glass trophies. We totally rocked that cook-off and didn’t even know it haha. To quote Elizabeth “It was like winning a beauty pageant” haha — well except we were in aprons and a bit sweaty

We’ll be on the Roanoke News Friday, November 15th LIVE at noon to cook our dish on TV (ahhh more panic!!) So be sure to tune in! (and not judge me!! haha)


Also if you live i Roanoke, The Fork in the City will have our dish on their menu for an entire week. I’ll have to find out when that will start! 🙂


Be sure to check out the the other bloggers that were there:

Elizabeth from E, Myself and I
John (@HungryAsianRke)

Use the widget below
a Rafflecopter giveaway