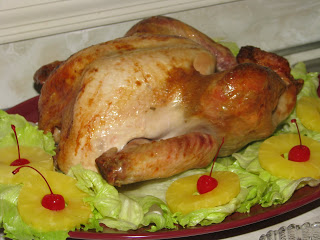 For Thanksgiving this year, we did something we’ve never done before. We Brined our Turkey Before cooking.

Mainly because I’m addicted to the Foodnetwork and I think about every 5 minutes Alton Brown was on my TV screen saying something like ” Help make my recipe #1seven years in a row”….. so I’m thinking that in my mind this was my cue that We MUST BRINE THE BIRD haha. But I also read a lot about it and everyone seemed to be talking about how moist it made the Turkey and they were Right!

So this is what you’ll need:

What you’ll need to do:

2 to 3 days before roasting You’ll need to start thawing the turkey in the refrigerator:

The Night Before You want to Roast Your Turkey You’ll need to:

Combine the vegetable stock, salt, brown sugar, peppercorns, allspice berries, and candied ginger in a large stockpot over medium-high heat. Stir occasionally to dissolve solids and bring to a boil. Then remove the brine from the heat, cool to room temperature.

Combine the brine, water and ice in a 5 gallon stockpot or cooler with a lid. (We used a large stock pot).

Place the thawed turkey (with innards removed) breast side down in the brine. Make sure that the bird is fully immersed, cover the bird , and refrigerate or set in cool area for 8 to 16 hours, turning the bird once half way through brining. ( We set our in the laundry room, it has no heat and was pretty cold that night… it saved room in the fridge)

Preheat the oven to 500 degrees F. Remove the bird from brine and rinse inside and out with cold water. Discard the brine.

Place the bird on roasting rack inside of a roasting pan and pat dry with paper towels.

Combine the apple, onion, cinnamon stick, and 1 cup of water in a microwave safe dish and microwave on high for 5 minutes. Add the mixture to the turkey’s cavity along with the rosemary and sage. Tuck the wings underneath the bird and coat the skin with canola oil.

Roast the turkey on lowest level of the oven at 500 degrees F for 30 minutes.

Then reduce the oven temperature to 350 degrees F.

When the bird reaches 161 degrees F its ready.

Let the turkey rest, loosely covered with foil or a large mixing bowl for 15 minutes before carving. 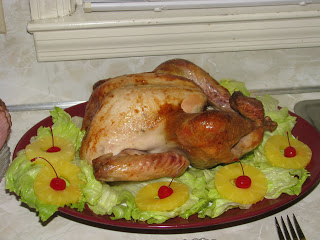