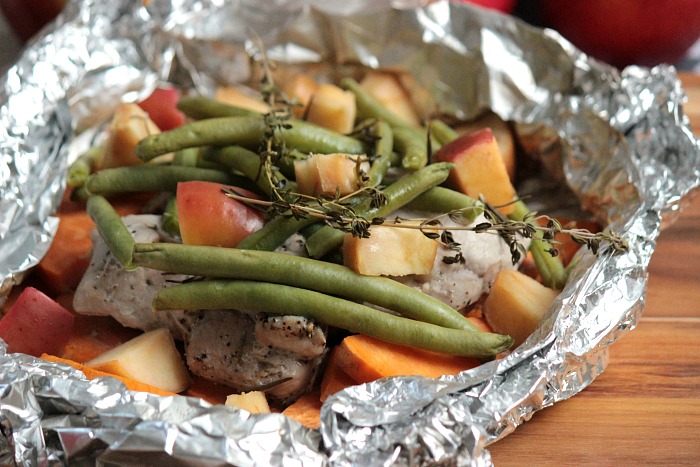 Camping isn’t really my thing. I mean it sounds like fun. Tons of fishing, relaxing, hiking….it always sounds like a fantastic idea until I start thinking about all of the details. You know… those details like: Where am I going to shower? What’s going to keep me from being eaten by a bear? What will keep the coyotes away? Bugs, spiders, snakes… enough said.

We use to go camping when I was younger. I was even in Brownie…I was in the running to be a Girl Scout…I then realized that it wasn’t for me. Haha.I’m just not a woodsy kinda girl. Hunting? No thanks, I’ll leave that for hubby. Fishing? Mmm I can deal with that. Camping (AKA sleeping on the ground with animals and bugs) Nope, nope, nope.

Even though these Campfire Apple and Pork Packets can totally be made over a campfire, I’m glad that they can also be made on the grill or in the oven.

For these Campfire Apple and Pork Packets you’ll need: 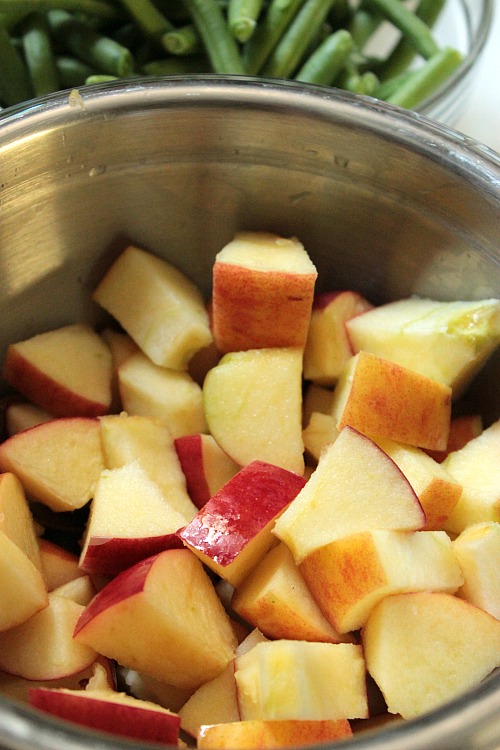 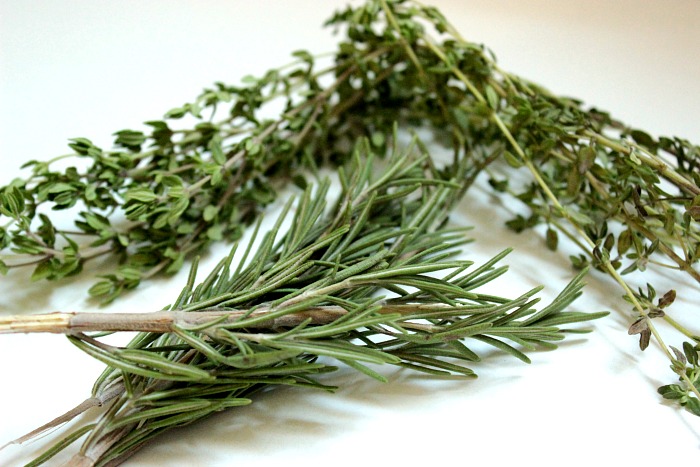 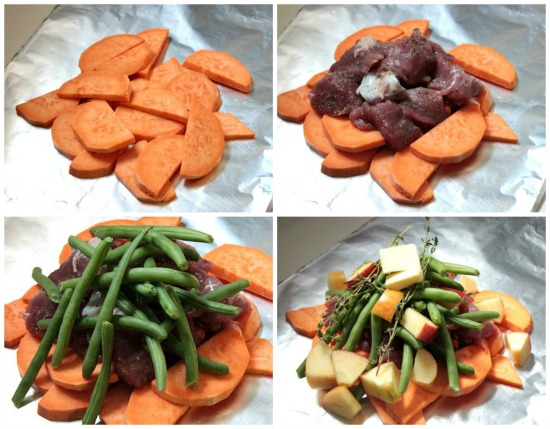 Then you’re just gonna top the green beans with some apple cubes, throw on some herbs and top it all with a beautiful pat of butter. 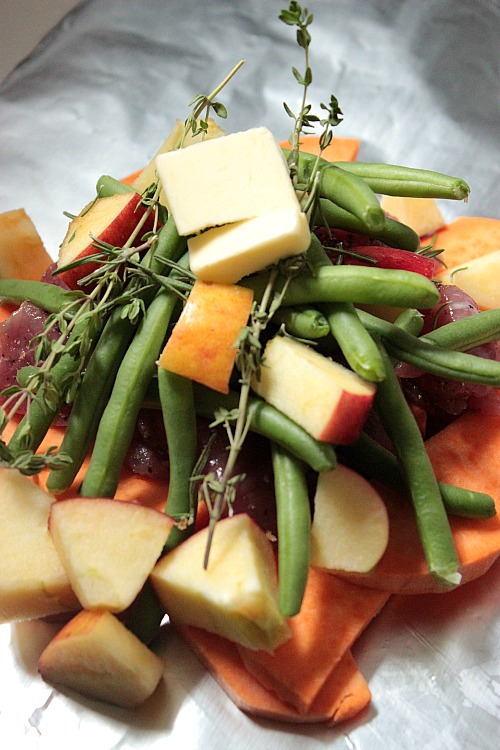 Because well… because butter makes everything better. 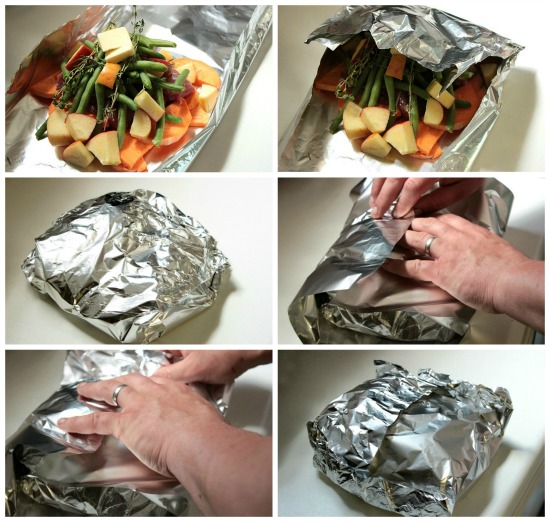 Then you’re gonna want to fold the foil over the pork and apples. Fold in the sides, rotate and fold in the last two sides. We double foil ours when we make these!

Next pop these onto the grill (or onto a sheet tray and into the oven) and bake at 350F for about an hour (or until the pork is done.) You want the pork to be done but don’t over cook it and dry it out! 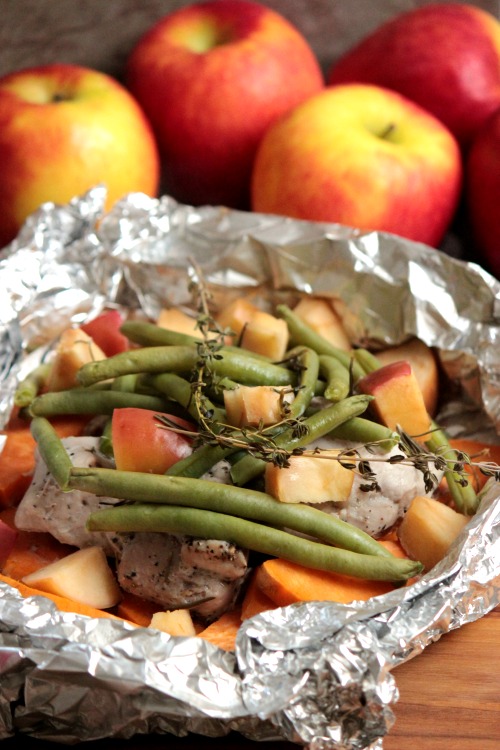 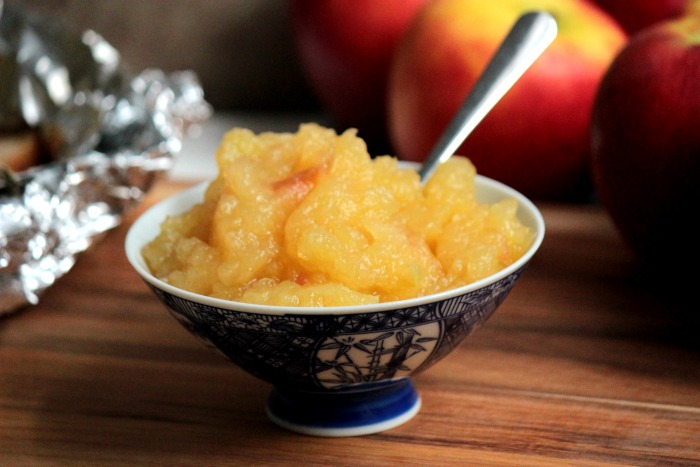 To add even more apple flavor to this dish I made a quick homemade apple sauce on the stove top to go along with it. You obviously don’t have to make this but I love to top my Campfire Apple and Pork Packets with the homemade apple sauce! Gives it more flavor in my opinion. BigBear preferred his without the sauce. 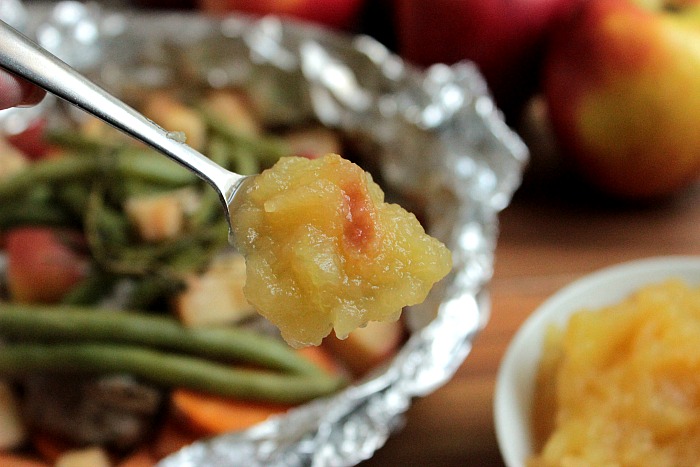 Also, I know I’ve talked about it before but I wanted to mention it again. You just have to go get some Greek Seasoning. We use the “no salt” version and LOVE IT!

2 sweet potatoes, peeled and sliced into chips
2 cups of fresh green beans
3 Jazz apples, cored and cubed
1 small to medium pork loin, cubed (size depends on how much pork you want)
Fresh sprigs of Rosemary and Thyme
5 tablespoons of butter (one tablespoon for each packet)
Salt and Pepper
A few Dashes  of Greek Seasoning*optional

Directions
Preheat the oven or grill to 350F.
Place pork into a medium bowl, sprinkle a little salt and pepper onto the cubed pork and toss to coat.
Lay out a sheet of foil and layer some of the sweet potato slices in the middle.
Top the sweet potato slices with cubes of pork. Top the pork with some of the green beans.
Top the green beans with some apple cubes. Add the rosemary and thyme and top. Add a pat of butter onto of the herbs.
Fold the foil over the pork and apples. Fold in the sides, rotate and fold in the last two sides. We double foil ours when we make these!
Next pop these onto the grill (or onto a sheet tray and into the oven) and cook at 350F for about an hour (or until the pork is done.) You want the pork to be done but don’t over cook it and dry it out!
Remove from oven and carefully open packet. Serve in the foil packet.
Ingredients for Apple Sauce
4 Jazz Apples, peeled, cored and cubed

Make sure to enter the giveaway because YOU could WIN
a $150 Visa Gift Card and a large box full of Jazz Apples!!!
Your entry will also give you an entry towards the grand prize of a new Vitamix blender and a $100 Whole Foods gift card!  #loveNZfruit.

JAZZ apples are touching hearts and taste buds with Crunch to Contribute, a fun and easy way for all of us to help change lives in a meaningful way. Crunch on a JAZZ apple, post a photo, and $1 will be donated to either the American or Canadian Diabetes Association. While the growers of this tangy-sweet, summer-fresh treat are in New Zealand, they wanted their fruit to contribute toward a far-reaching diabetes prevention solution. High in fiber, JAZZ apples add crunch―and zingy flavor!―to virtually any recipe. And next time you munch on JAZZ, show your stuff and post a pic.

Potato Salad with Apples from Cook the Story

This post and recipe is sponsored by Jazz Apples. As always, all words and opinions are my own 🙂 Always have been and always will be 🙂
Pin
Share
Tweet
982Shares
Previous Post: « Chinatown Honolulu, Oahu, Hawaii
Next Post: Our Stay at Disney’s Grand Floridian Resort & Spa – Walt Disney World – Florida » 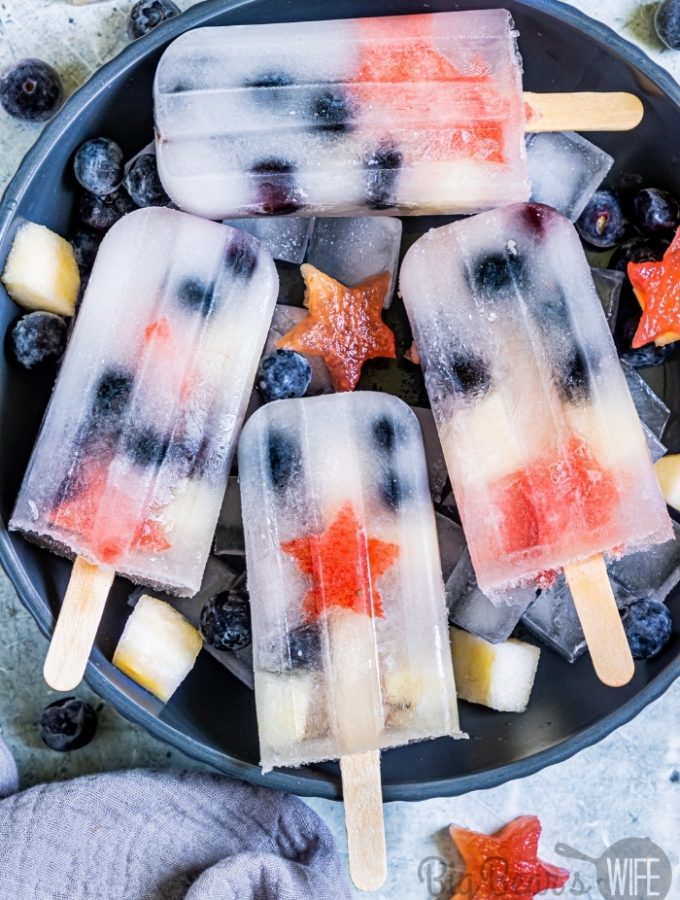 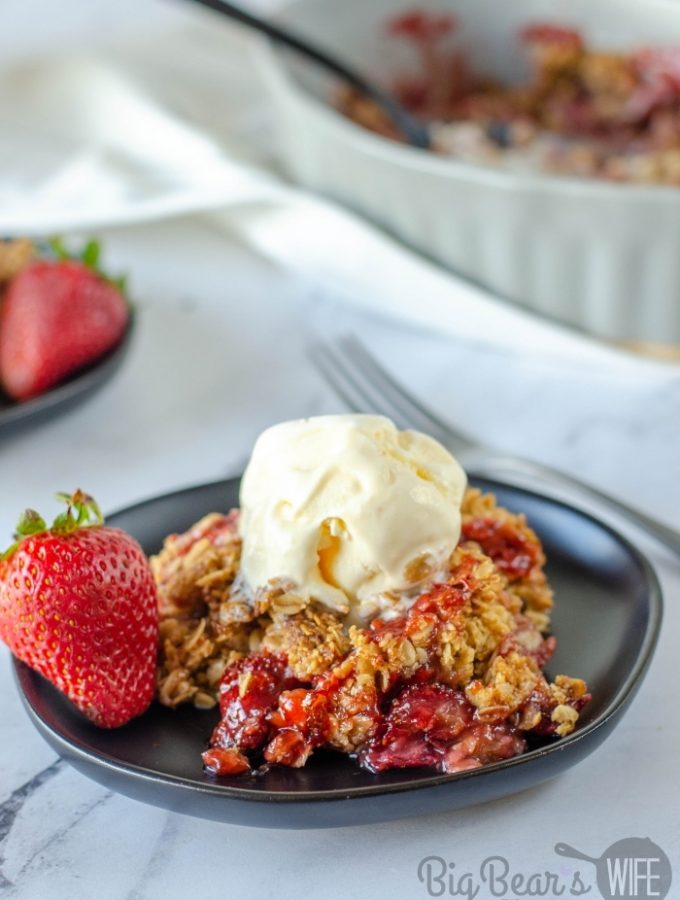