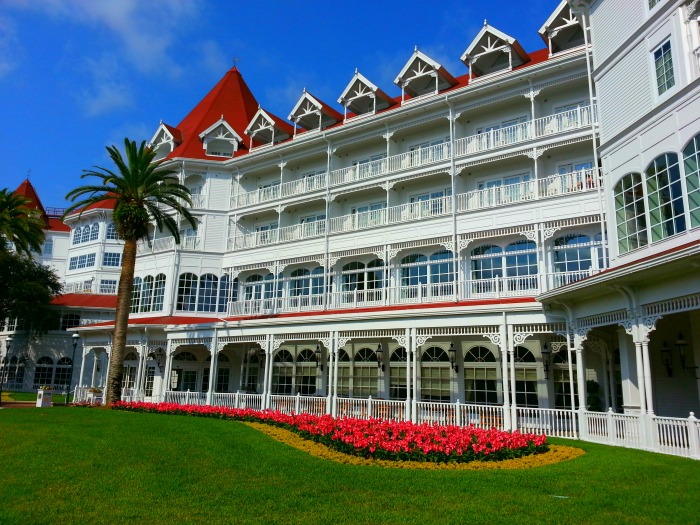 Disney’s Grand Floridian Resort & Spa at Walt Disney World is one of the prettiest hotels I’ve ever stayed at. This resort totally made it onto my “Top 10 List”! It’s beautiful, elegant and literally right beside Disney’s Magic Kingdom!

BigBear and I had the opportunity to stay at Disney’s Grand Floridian Resort & Spa last year when we went to a Food Blogger Conference called “Food Blog Forum” that was held at Walt Disney World. This Resort is one of the top Disney resorts and I’m so glad that we had the chance to call is “home” for a few nights while we were in Orlando! 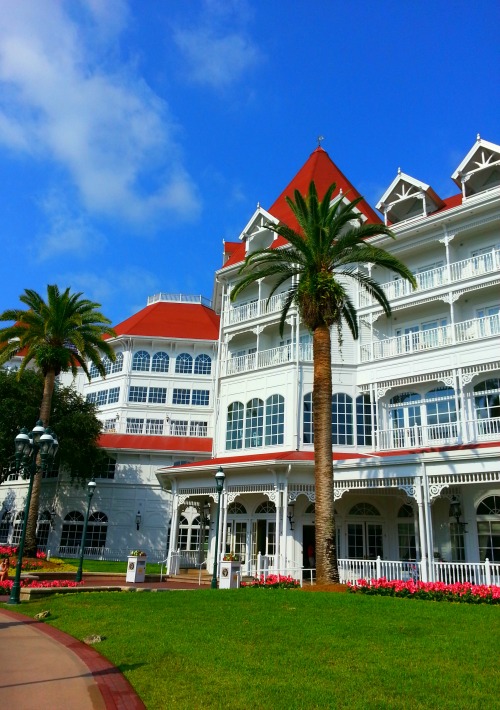 Disney’s Grand Floridian Resort & Spa is rated as a 4.5 Star Resort on TripAdvisor.com and if you book through Disney’s website it’ will run you anywhere from a low of $490 a night for a garden view to $1942 a night for a 2 bedroom suite. See what I mean when I say that I was thankful that we were there with the food blogger conference!

We got a good deal on the rooms through them and that’s the only way we could afford to stay here. BUT even though I find it to be out of my normal price range I know that’s not the case for everyone so I still wanted to share! Plus even if you’re not going to stay at Disney’s Grand Floridian Resort & Spa you may still want to pay it a visit if you’re staying at one of the other resorts; It’s still got great restaurants and shops! 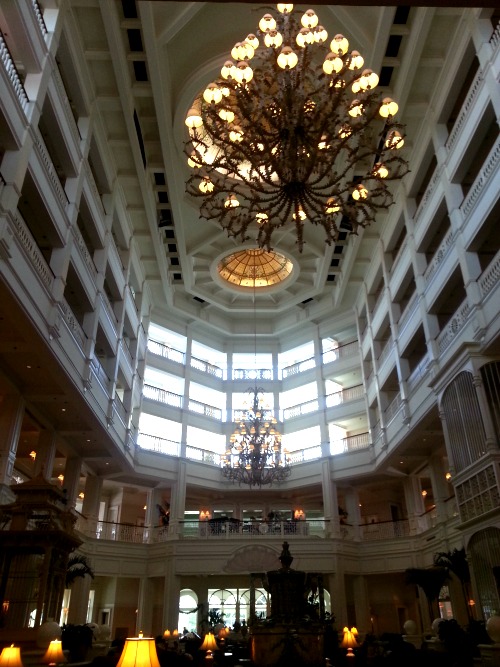 We went down to Disney for 4 nights. The conference ticket covered two of our nights but for the other two we chose to stay at the Disney All-Stars resorts. Now I’m telling you this because when we arrived at Disney’s Grand Floridian Resort & Spa we were coming from Disney’s All-Star Movie Resort and afterwards we found out a little tip about switching Disney Hotels.


**DISNEY TIP** After the trip, we found out that if you’re moving from one Disney Resort to another that Disney will transport all of your bags to the new resort free of charge! We didn’t know this at the time and drug our luggage from Resort to Resort haha. 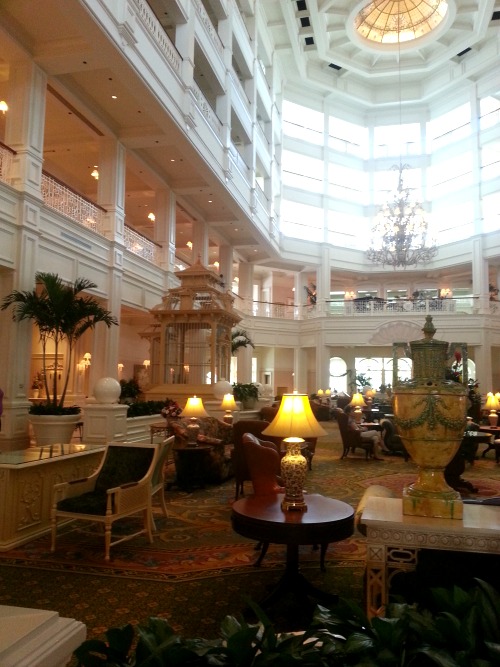 But anyways, back to the resort. We got to the Grand Floridian a little early but we were able to check in to our room anyways! Behind the check in counter is this beautiful lobby area that you see in these photos! It’s simply amazing! Big Bear and I both agreed that it made us feel like we had stepped onto the Titanic! haha.

There are about 5 levels to the lobby. I do believe that the top 3 are rooms but I’m not 100% positive of that. However, the first level is where check-in is and the entrances to some of the restaurants! 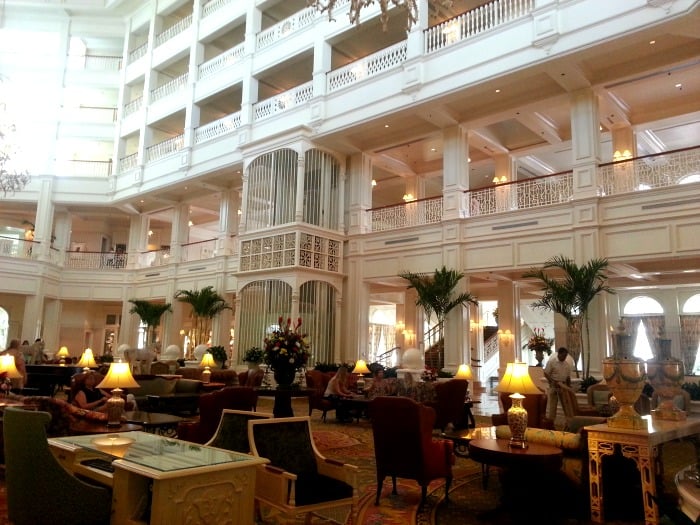 Do you see that bird cage looking thing there in the middle of the lobby? That’s the elevator! It takes you to the second level (our you can take the grand staircase behind it). The Second level had a few shops and it gives you access to the monorail platform. The monorail is the little train like vehicle that take you around Disney World; it can take you to some of the other resorts, Magic Kingdom or Epcot (you have to change monorails at the Transportation & Ticket Center (TTC)  if you’re headed to Epcot!)!

PS. If you get on the Monorail at Disney’s Grand Floridian Resort & Spa the Magic Kingdom is your first stop! 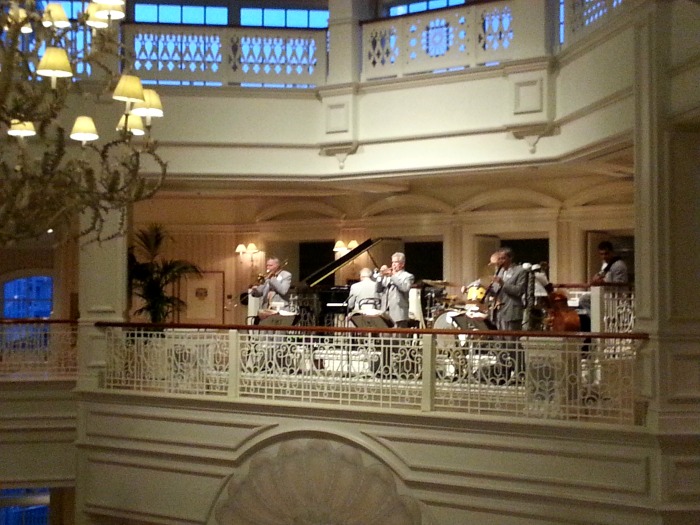 One night we came back to the hotel after having dinner over at the Polynesian Resort and the Grand Floridian Lobby Society Orchestra was playing! Of course since I am a Disney FREAK, I recognized the tune right away. BigBear on the other hand didn’t have a clue. 😉 They were playing “I Wanna Be Like You” from The Jungle Book 🙂 haha I remember this because I asked BigBear what movie it was from and it said “TITANIC” haha.. nope.. good try though honey 🙂 The Grand Floridian Lobby Society Orchestra plays in 30 minute burst from 4:00pm-10:00pm. They are fantastic! 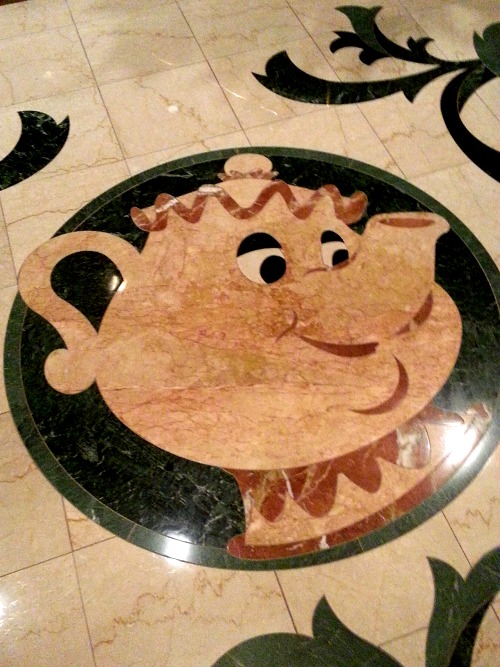 Look at what else we found while we were walking around the Grand Floridian’s lobby! If you’re in the lobby and walk over towards the Tea Room you’ll see this cutie etched into the marble floor! It’s Mrs. Potts from Beauty and the Beast! I had to snap a photo and send it to my friend Kasey from Kasey’s Kitchen! She LOVES Disney and guess what….her last name is Potts! haha 🙂 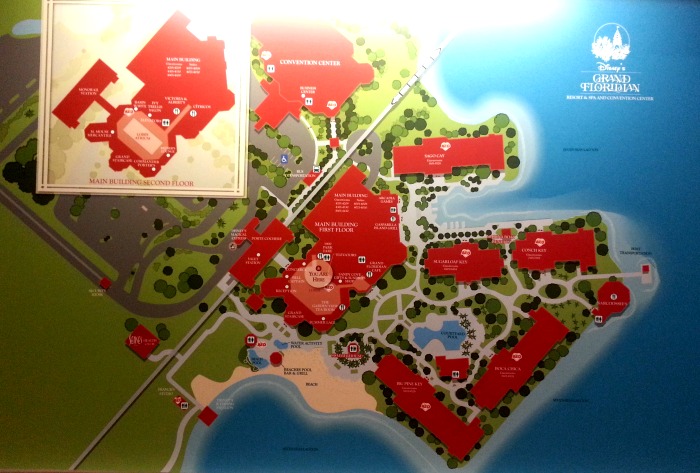 I also wanted to include this map of Disney’s Grand Floridian Resort & Spa so that you could see just how big this resort is.  The Building on the upper right is where we stayed, Sago Cay. 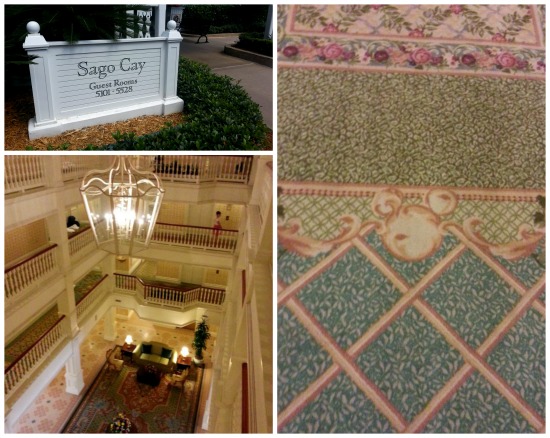 We stayed on the 4th floor of the Sago Cay building. Be sure to be on the lookout for Hidden Mickeys! They are everywhere! 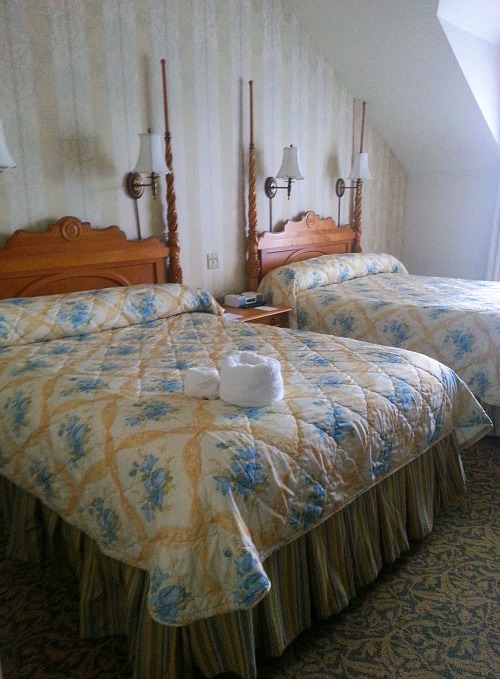 So this was our room. I took a few photos inside the room but I also found this video from ExploreTheMagic.com that looks pretty similar to the room we stayed in. Just in case you want to see a video of the Grand Floridian rooms, check out their video.  It was a pretty room but I’m not sure if it was quite my style. Grand Floridan perfection, Barrett preference…. mmmm maybe…. I feel like maybe they could use a tiny update. 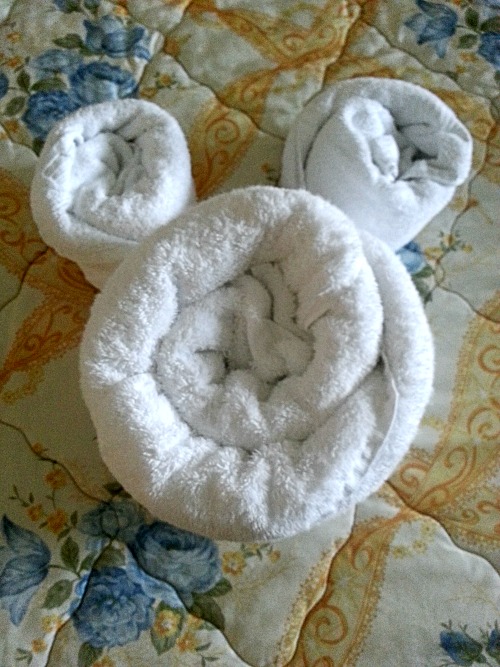 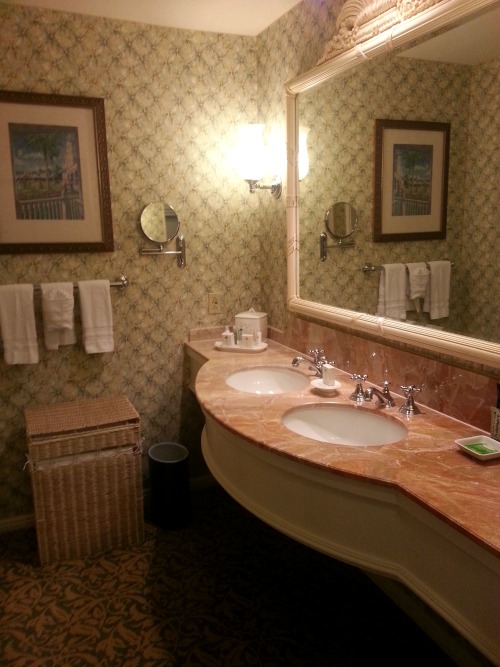 Just a quick shot of the bathroom so that you can see what they look like at Disney’s Grand Floridian. The shower and toilet were off the the left behind another door. I LOVE bathrooms that separate them like that. 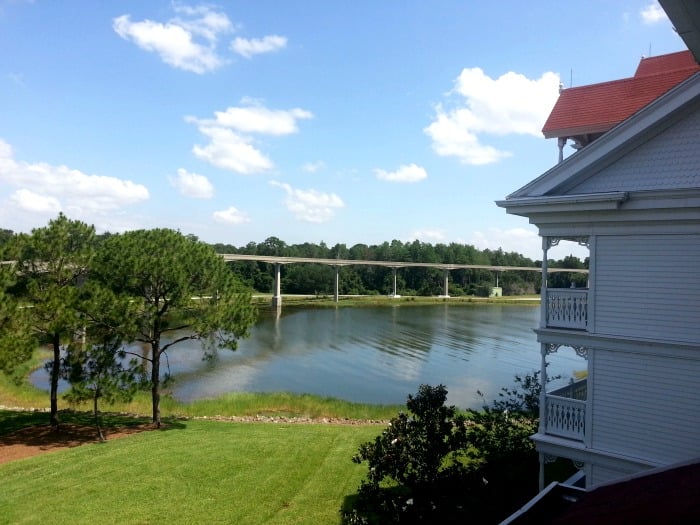 This was the view from our room. Not much to look at there other than the monorail that came by a few times. However it was quite peaceful in the mornings. 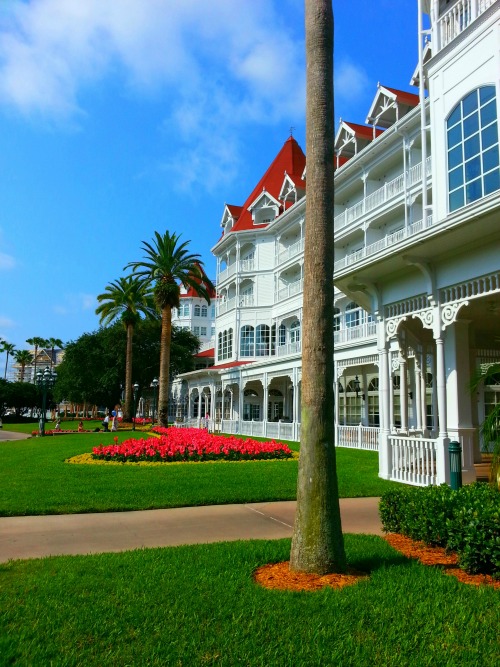 Moving on from the room and into the outside area at Disney’s Grand Floridian Resort & Spa, this was right outside our building. 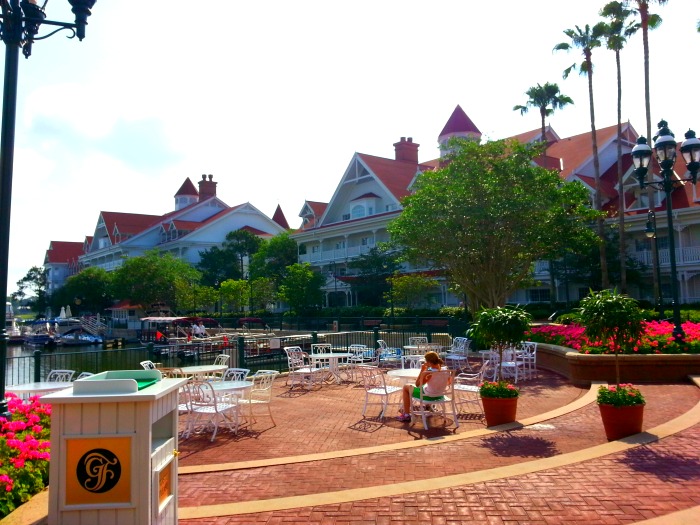 To the left was a little boat dock along with a patio. This turned out to be a perfect place to watch the fireworks! We sat right behind the steps there and watched WISHES one night! Wishes is the firework show that they put on every night over Cinderella’s Castle in the Magic Kingdom. It’s also a wonderful place to eat breakfast! 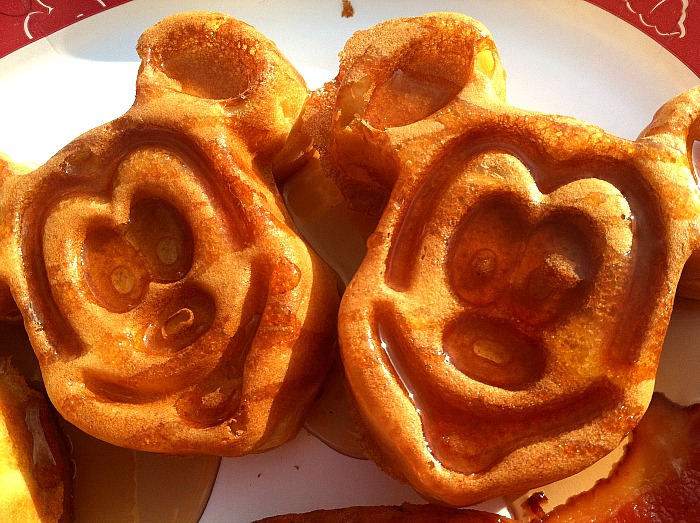 Why YES… I did have Mickey Mouse Waffles one morning on that patio haha. Now where do you get Mickey Waffles? Well to be honest I’m pretty sure you can get Mickey Waffles from just about anywhere in the mornings at Disney but we got these from Gasparilla Island Grill which is located right behind this patio area.

Gasparilla Island Grill is a quick service restaurant and is open 24/7. They have a Bakery Counter that’s filled with croissants, muffins and danishes as well as an ordering station that provides flat bread pizzas, sandwiches and salads. There are also two large wall coolers, one that holds all of the drink options and another that’s stocked with sushi, cupcakes, yogurt and fruit! 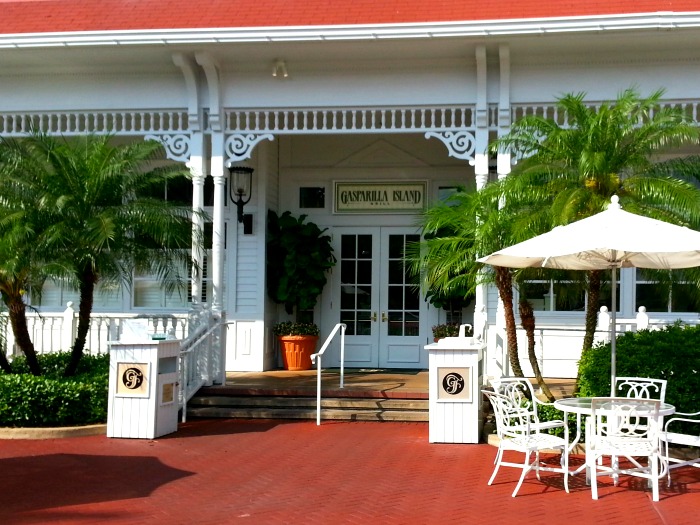 Now, Disney is one of the few places that I can literally eat ANYTHING I want. I will literally walk so many miles while I’m at Disney that I loose weight every time I go there. However, I may love the cupcakes and sweet treats but sometimes I just need fruit. I love the fact that you can find fresh fruit everywhere!

We ate here quite a few times while we were at Disney, mainly because it was one of the cheaper options and it was close to our room. BUT remember when I say cheaper, I don’t mean cheap. haha Everything in Disney is ridiculously expensive but for Disney it was a good price. 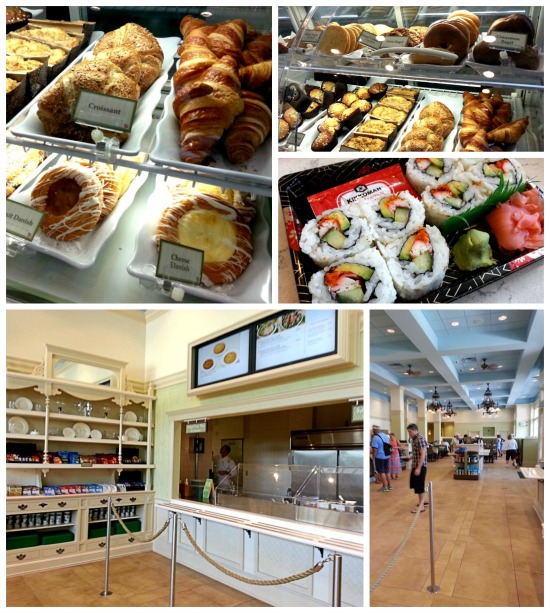 While we’re on the subject of expensive things, let me share this bit of information with you! It’s hot in Florida…. like it’s HOT HOT. My husband drinks A LOT of water and soda on normal days so I knew that we were going to spend a boat load on drinks while we were in Florida! But then, we found out about these refillable Disney mugs! 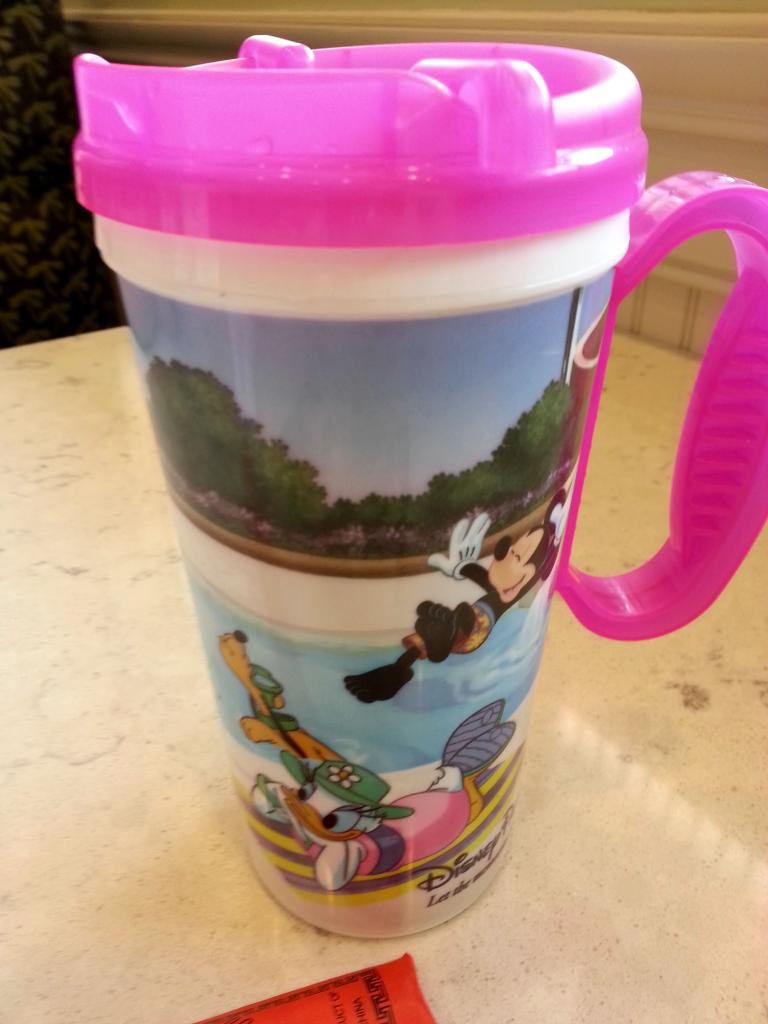 You can purchase one of these babies at any of the Quick Service Resort Restaurants. I think we paid like $15 each for our mugs but we didn’t have to buy anymore drinks while we were there (unless we were in the parks or at a sit down restaurant). If we needed drink we just took our mugs over to one of the Quick Service restaurants and filled up. Note that when we were there you could only use the mugs for soda, tea and regular (or decaf) coffee. So make sure to check when you’re there to see if those rules have changes.

I know that $15 sounds pricey for a mug but hey, like I’ve said before EVERYTHING is $$$$ at Disney. I just count the mug as a souvenir with a perk of getting free drinks for my entire trip haha.

Last I heard, they had put some kind of new bar code scanning system with the mugs so I’m not exactly sure how the new system works. 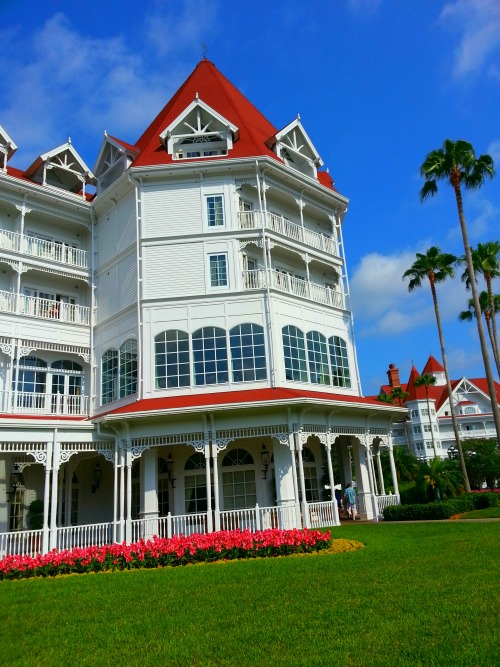 Disney’s Grand Floridian has a total of 10 restaurant, including the pool bars.

We’ve only eaten at Gasparilla Island Grill but my dream is to one day eat dinner at the chef’s table at Victoria & Albert’s!!

If you’re looking for character meals, 1900 Park Fare has character breakfast and dinner!! 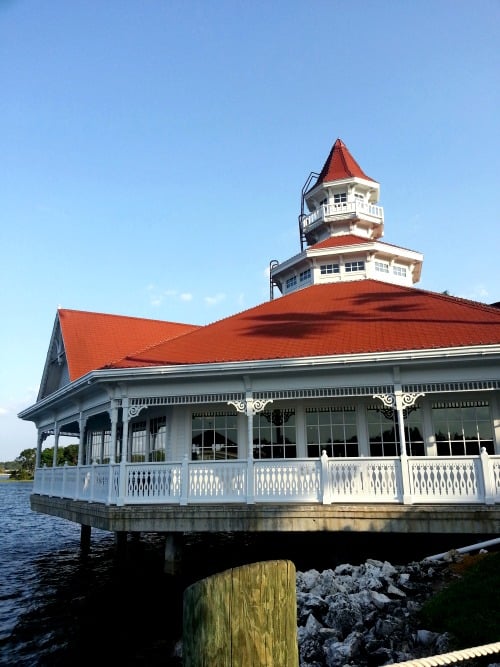 One last thing before I forget. There are 4 ways to travel from Disney’s Grand Floridian Resort & Spa to other parts of Disney (without getting into your car!)

Monorail
If you get on the monorail (it’s located on the second level of the lobby), your first stop will be the Magic Kingdom, next you’ll go to Disney’s Contemporary Resort, Transportation & Ticket Center, Disney’s Polynesian Resort and the back to Disney’s Grand Floridian Resort & Spa.


If you want to get to Disney’s Polynesian Resort from Disney’s Grand Floridian Resort & Spa there is a walking path between the two.

Bus
I’ve never used the Disney Bus but you can ride these to get from the resorts to the parks and to get to Downtown Disney.

So what did you think? Would you enjoy Disney’s Grand Floridian Resort & Spa or would you prefer a different setting? Have you ever stayed here? How did you like it?

Some people have found that the Grand Floridian Resort & Spa has more of a snob attitude than some of the other resorts but we didn’t find that to be the case. I felt comfortable in shorts in a t-shirt as well as when I was in a dress. Plus everyone was super friendly. I only met one person there that was kinda blah, I refilled my mug with a flavored coffee one morning (hey they SAID coffee haha) and one of the waitresses kinda snapped at me but maybe she was just having a bad day)

BigBear said “You know when you’re at the All-Star Resorts, everyone is kind of moody. The kids are going wild and the parents look like they are about to rip all of their hair out. At the Grand Floridian everyone looks so peaceful and happy.”

I told him that it was because people that can afford to say at Disney’s Grand Floridian Resort & Spa can also probably afford nannies haha 😉  Just kidding guys, just kidding. Kinda… haha 🙂