These tasty chocolate cupcakes are not only topped with bright orange icing but they also have a spooky melting witch ontop! 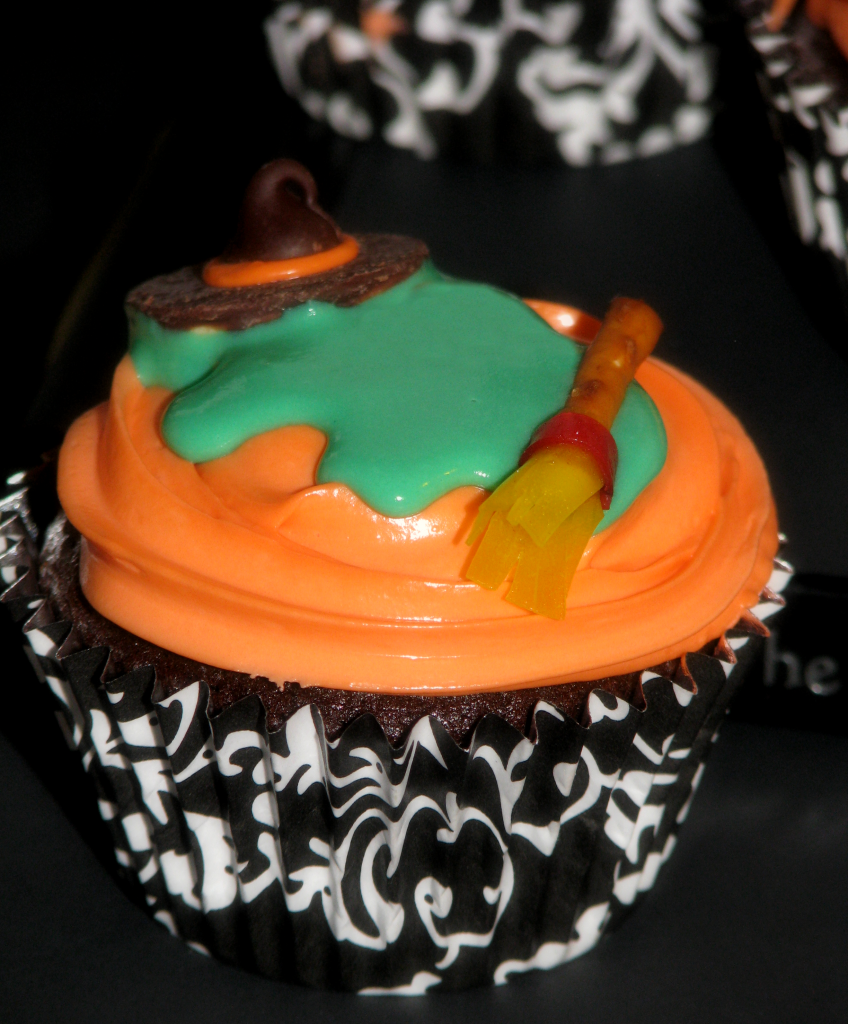 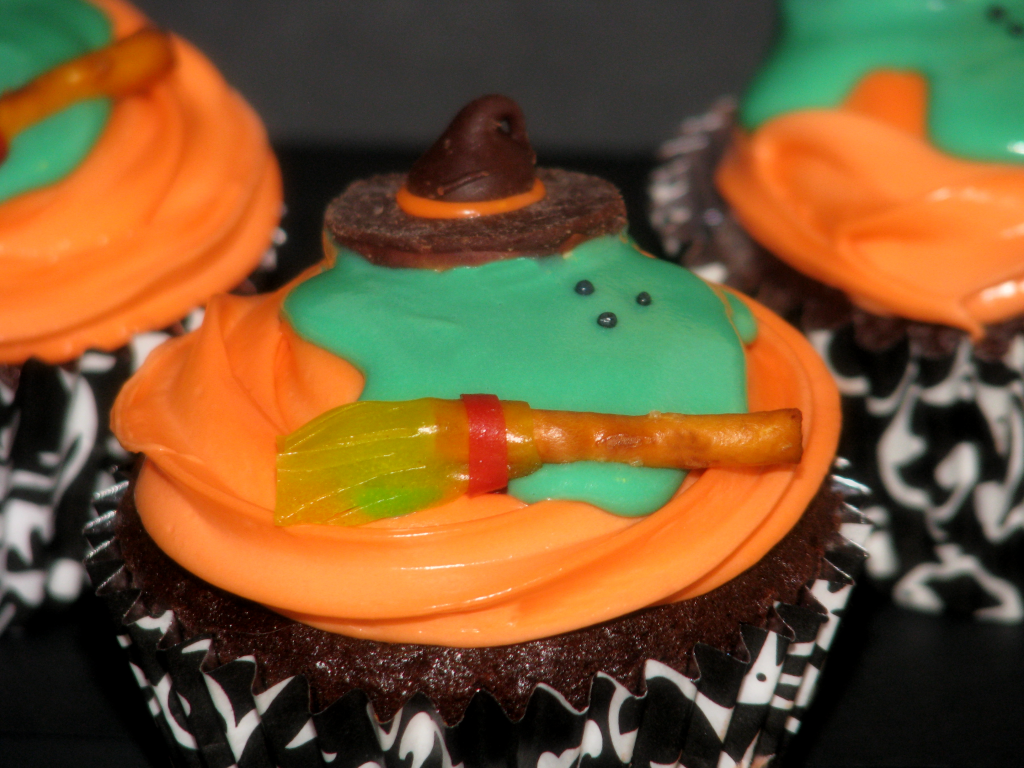 Halloween is almost here. It’s pretty much creeping around the corner. Which makes me kinda excited, because it is one of my favorites days of the year 🙂
When I was little my favorite Halloween costume was a witch. I think I was a witch for 4 or 5 Halloweens in a row. I have no idea what my fascination with witches is, but even as an adult I love them. Like the pointed witch hat, the broom, the black cat. 🙂
So when I saw all of the cute little witch hats made from cookies and Hershey kisses floating all over the web, I fell in love. I thought Of making them. But what would I do with a bunch of witch hat cookie? Well I’d eat them by the handful I suppose. Yeah…… not a good idea.
So I thought well, I could make them miniature, and put them on something. Like a cupcake! And give them away in cupcake form! A melting witch cupcake! YES! 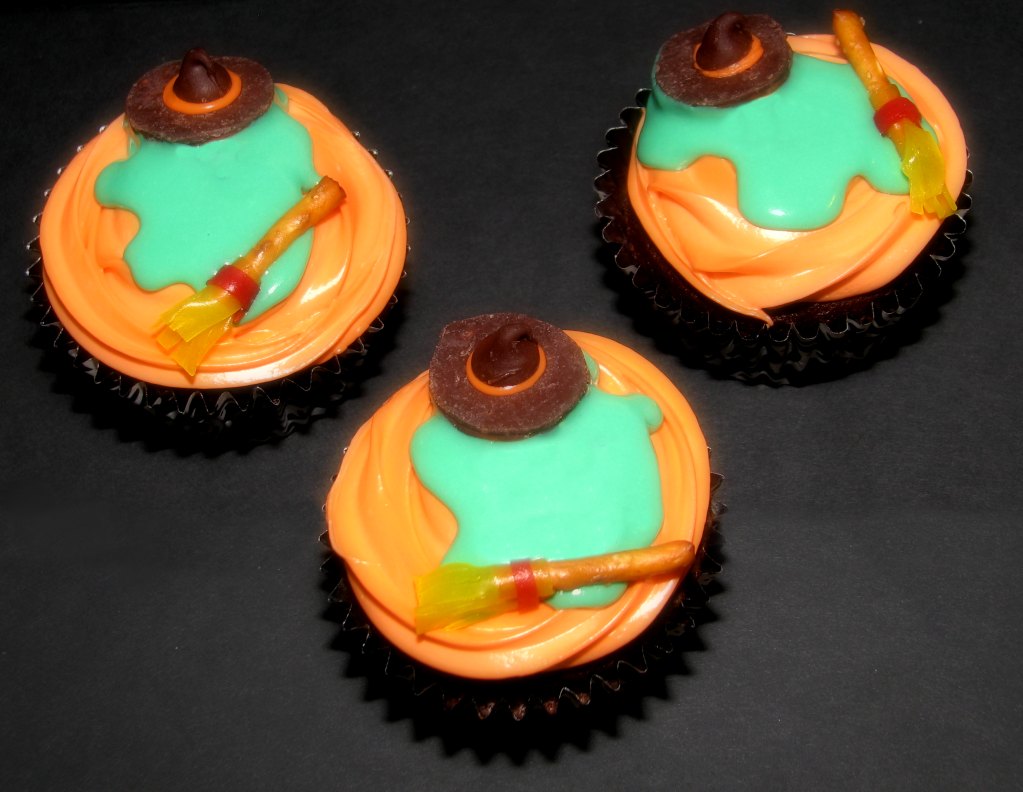 So yes, in-case you’re also wondering, they do remind me of the melting witch from the Wizard of Oz! 😉
Happy Haunting! Check out all of the spooky Halloween recipes and crafts on this website!! 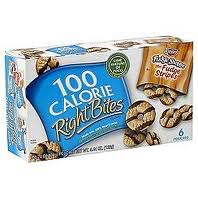 Once you’ve baked and cooled your favorite cupcakes, frost the cupcakes with the orange icing.
I used a M1 tip and swirled the icing, starting in the middle and working my way out to the edges of the cupcake.

After frosting them with the orange I stuck them in the fridge to firm the icing a bit before the next steps.

For the Witch Hat: 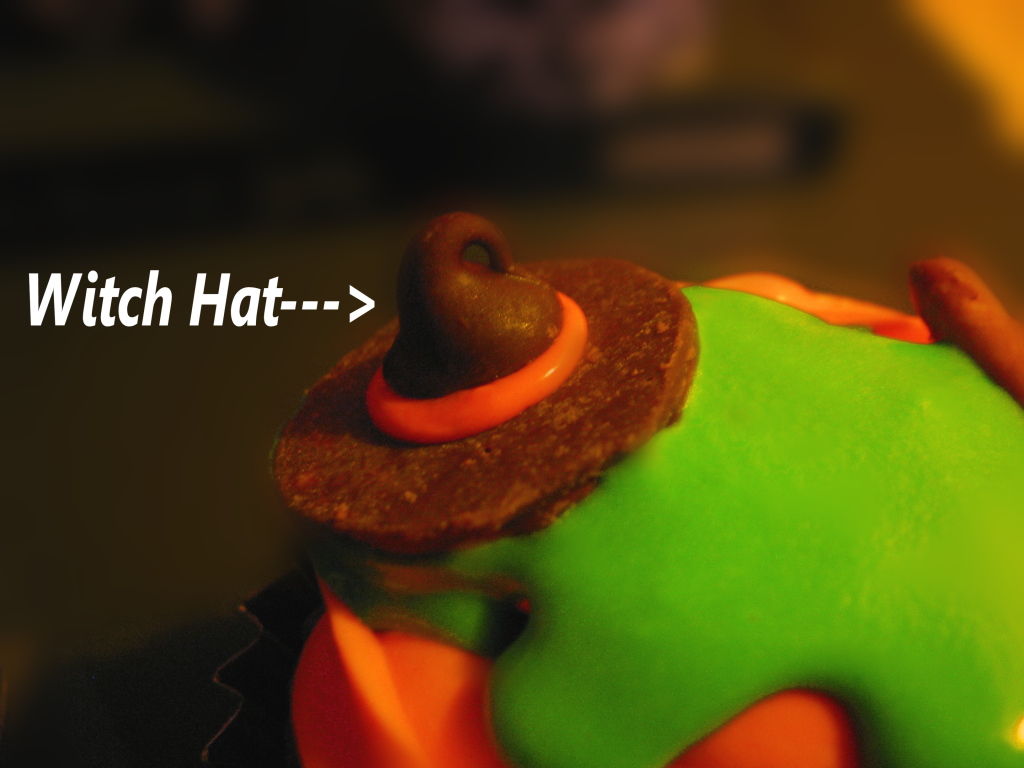 Take one of the Mini Fudge Cookie and flip it over so that the flat chocolate side is facing up. Pipe a tiny bit of orange icing into the center of the cookie, and press a chocolate chip onto the orange icing. This will make the hat with the orange rim. 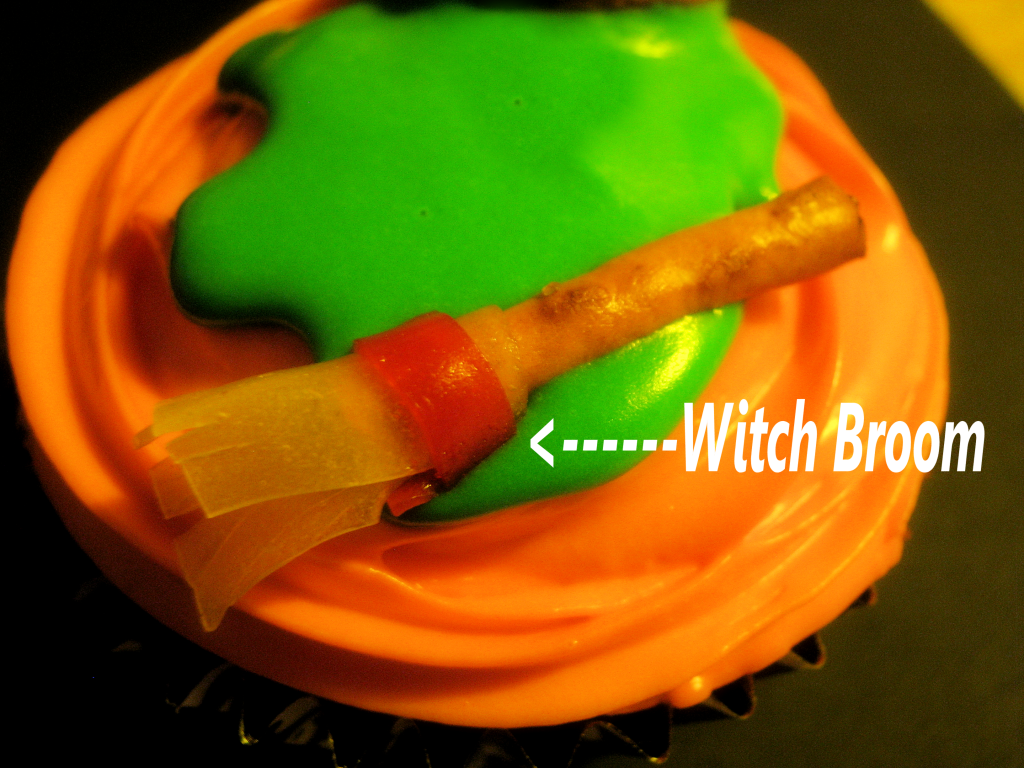 Snap a mini pretzel stick in half. (Each stick will make 2 brooms)
Cut a small rectangle from the yellow fruit roll up. Slice one end of the rectangle into a few long strand to make the broom end. 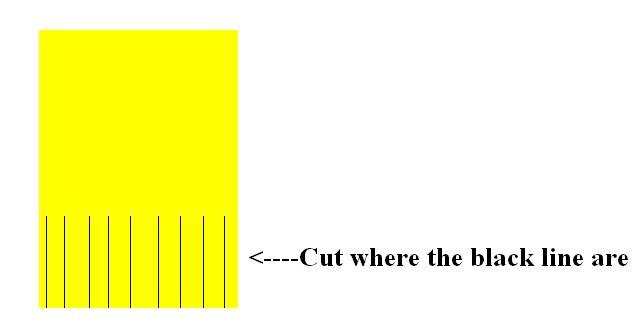 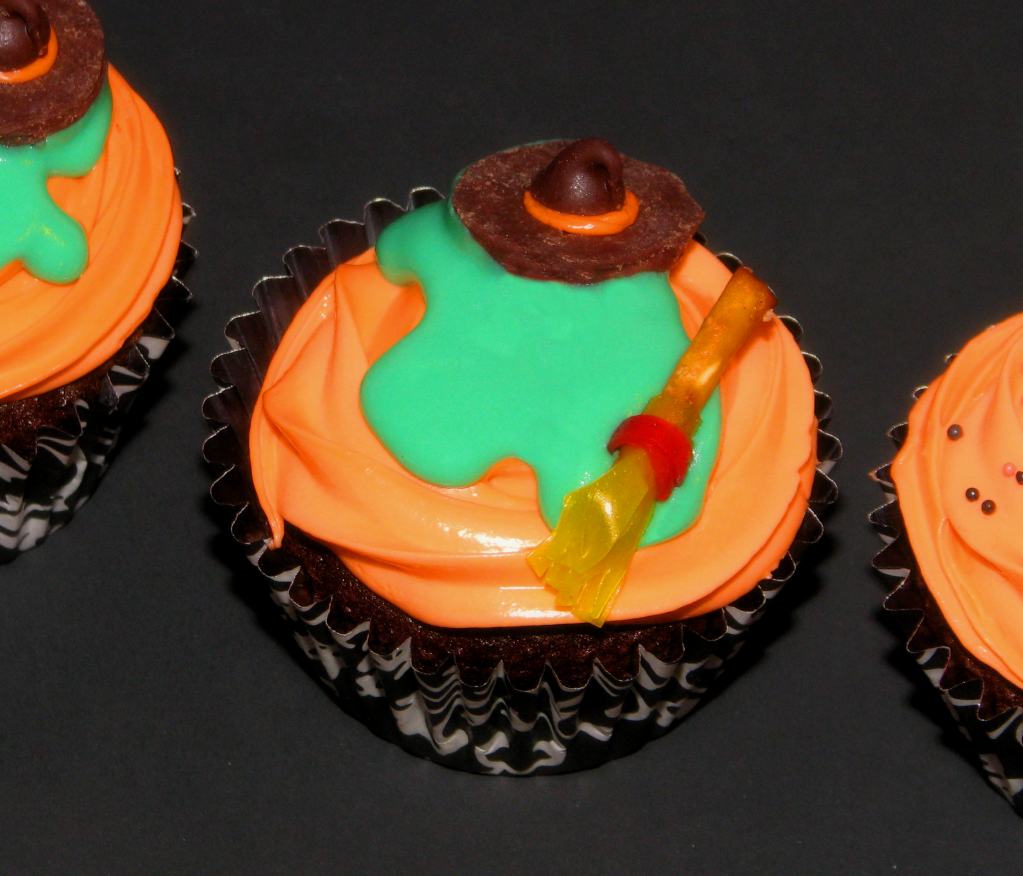 Spoon a little of the green frosting into a microwave safe bowl. Microwave the green icing for about 10-20 seconds to melt it. You don’t want it to get to hot though, so make sure to check it after 10 seconds. You just need it to be thick like liquid.

Spoon some of the green liquid icing over the orange cupcake, Making a puddle.

Add the witches hat and broom to the cupcake! 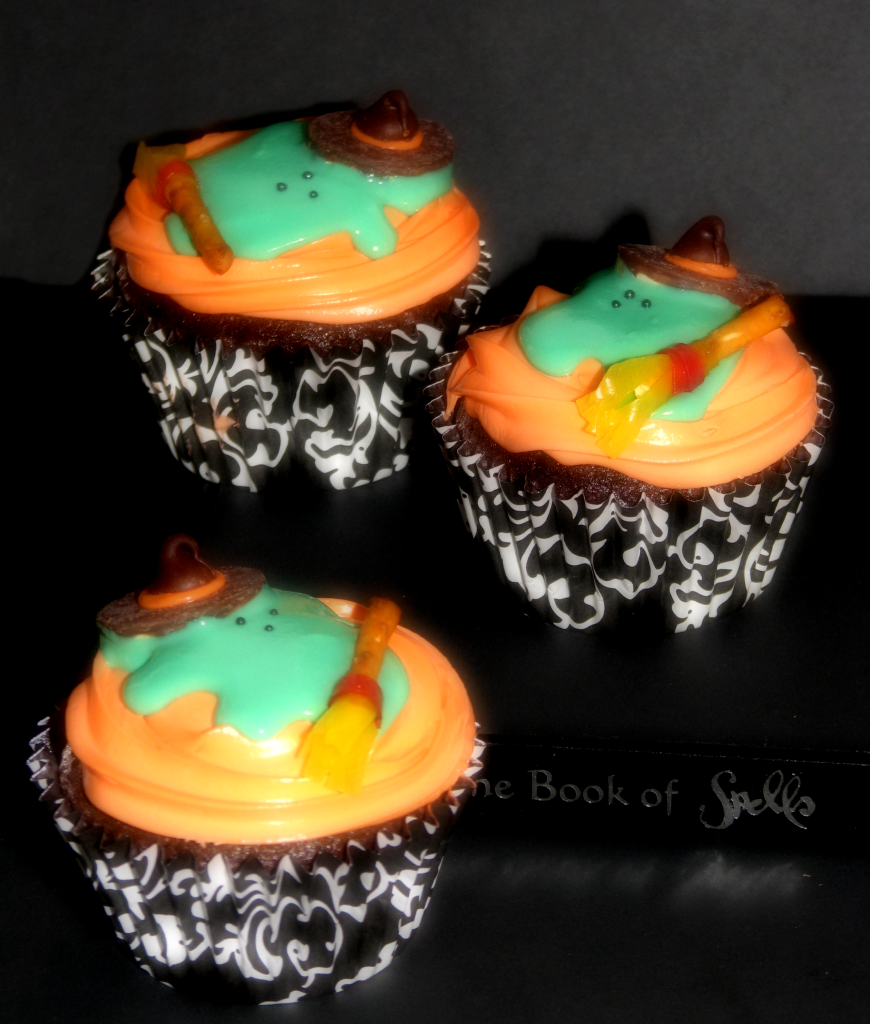 I also had some black round sprinkles, so a few of my melted witches have eyes and a nose. haha 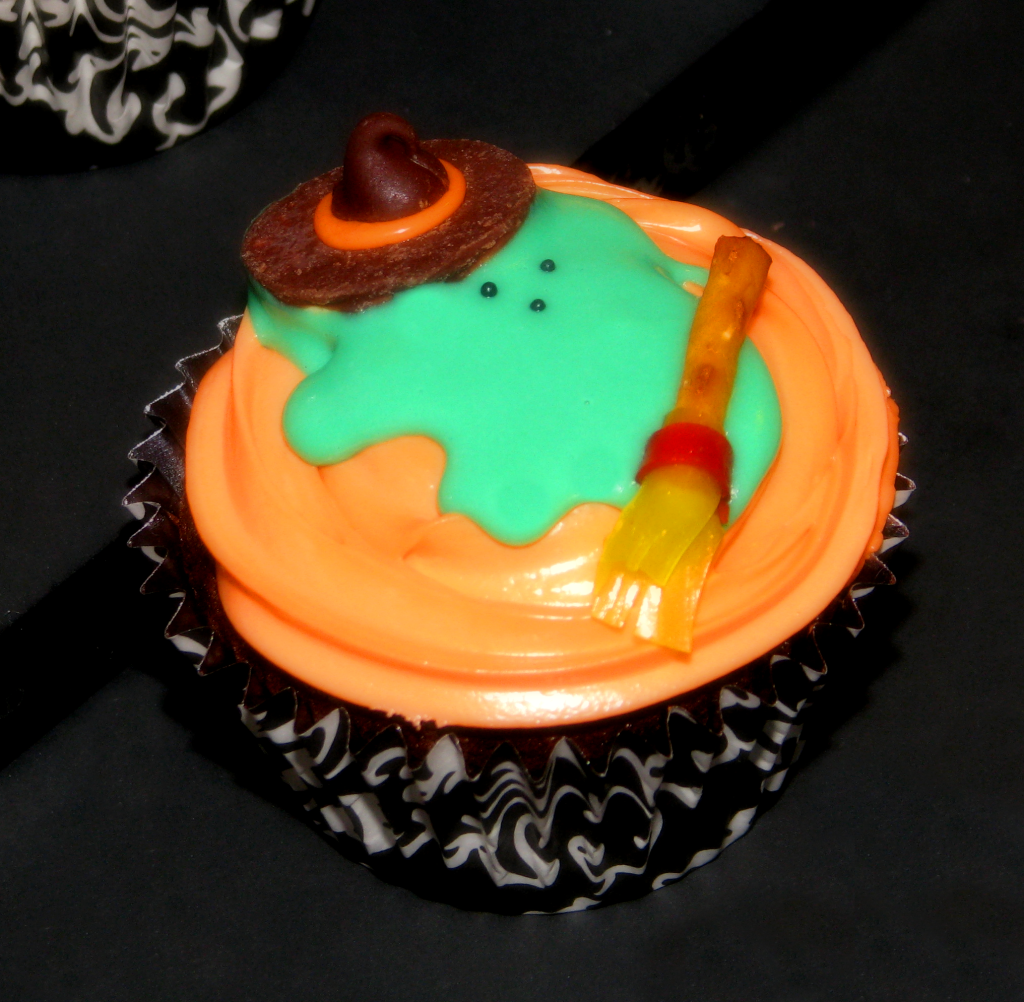 What was your favorite Halloween costume?

Chocolate and Cherry marry perfectly in these Black Forest Cupcakes! ...