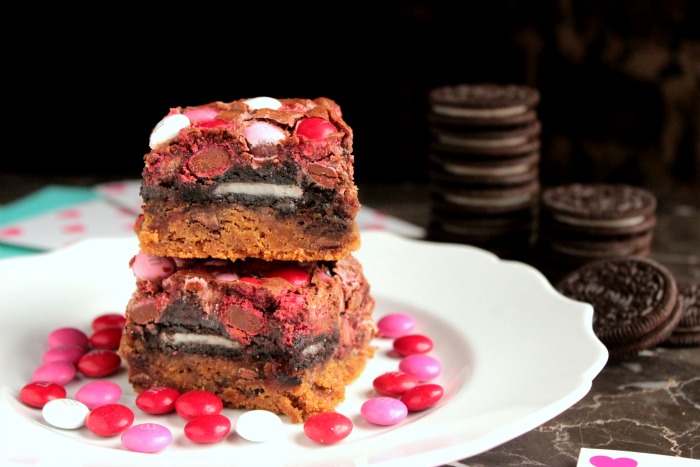 How did these M&M OREO Chocolate Chip Cookie Brownies happen? Well they happened after a long day at the hospital, a dinner with friends and a late night trip to the grocery store. haha. When I was down in Wilmington with Nikki we went out to dinner with her niece and nephew and since I had plans that night to make Toni a bourbon pecan pie (for when she came home from the hospital) our conversation during dinner turned to desserts.

Nikki can’t have pecans because she’s allergic *insert sad trombone* and I was trying to come up with another dessert that I could make that night so she didn’t feel left out haha. I’m a giver, what can I say. 😉 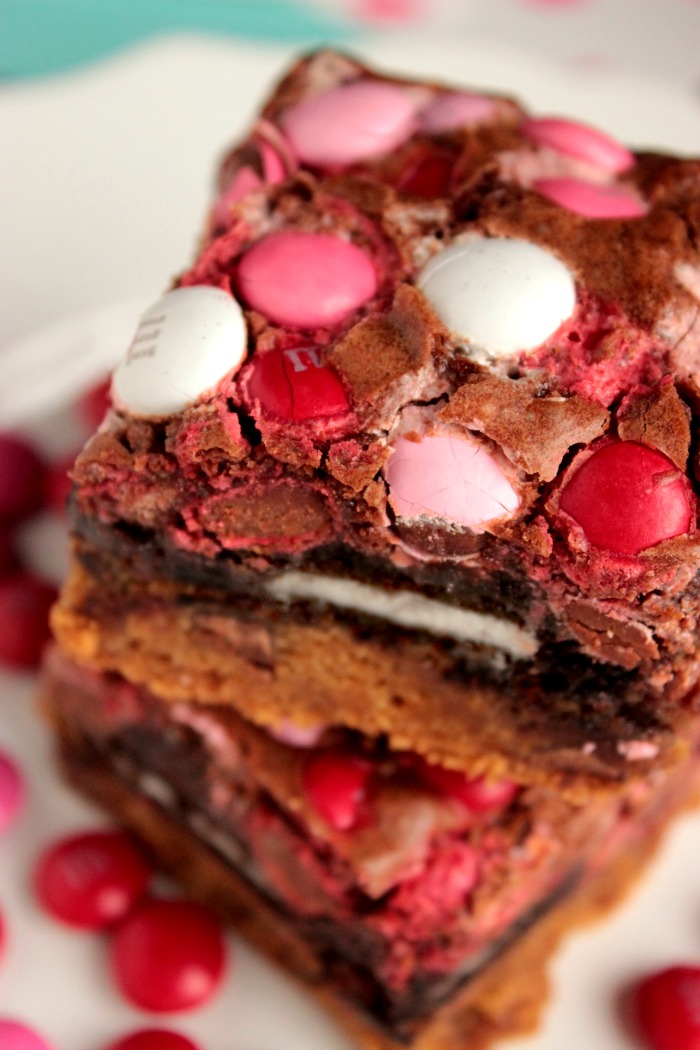 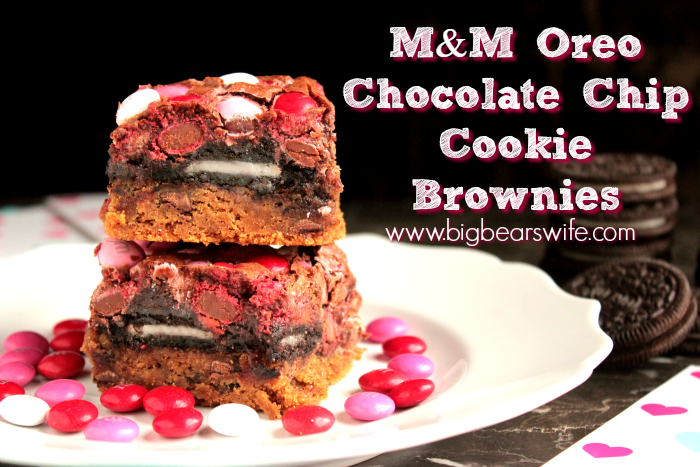 But anyways, Madison suggested these and I immediately thought of Kevin and Amanda‘s version! Then I felt like a total asshole because Madison told me that she could tell me how to make them and without thinking I told her that I had a friend who had the recipe on her blog and that I could grab it real quick. Yep….jerk move. Sorry Madison.

So we added those to the buggie, checked out and then drove home to start working on brownies and pecan pies. 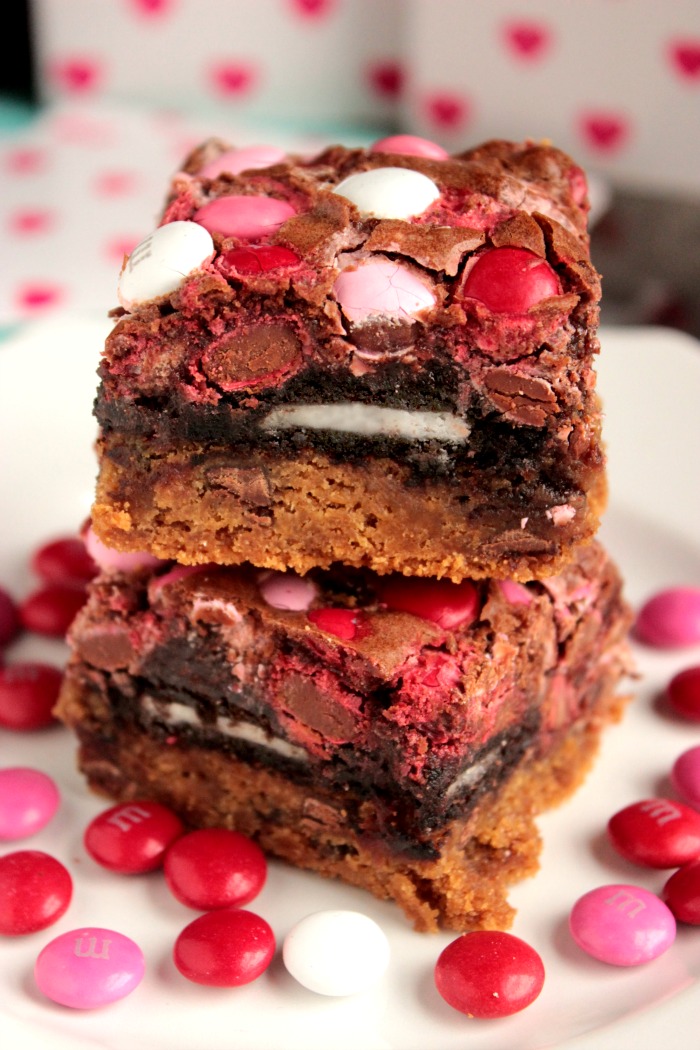 Amanda’s recipe for the Ultimate Chocolate Chip Cookie n’ Oreo Fudge Brownie Bars  is pretty much all from scratch and her brownies don’t have M&MS.

However, the version that Madison taught me how to make is quick and to the point with Boxed Brownie Mix, Pre-Made Cookie Dough and Oreo Cookies. Either way you make these brownies will be delicious.

I mean I do like to make things from scratch but I have yet to master the homemade fudge brownie so boxed mix it is! 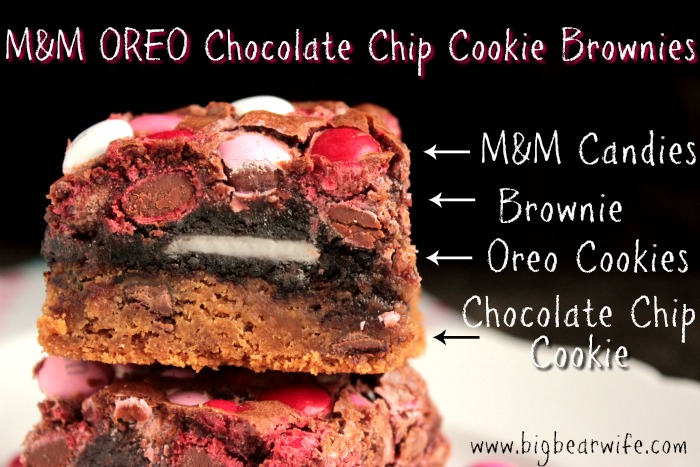 The first time I made these I made them with regular colored mini M&Ms. I think I probably like the mini M&Ms better but they don’t really have Valentines M&MS in mini size around here (I’m not sure if they even make them) so when I wanted to make these for Valentines Day I had to stick with regular sized M&Ms.

Don’t worry though, they taste just as good with the regular sized M&Ms. 🙂 I’ve also made these with peanut butter M&Ms and those things were just heavenly!

I just sent a huge batch of these to work with Thomas, hopefully they all love them! 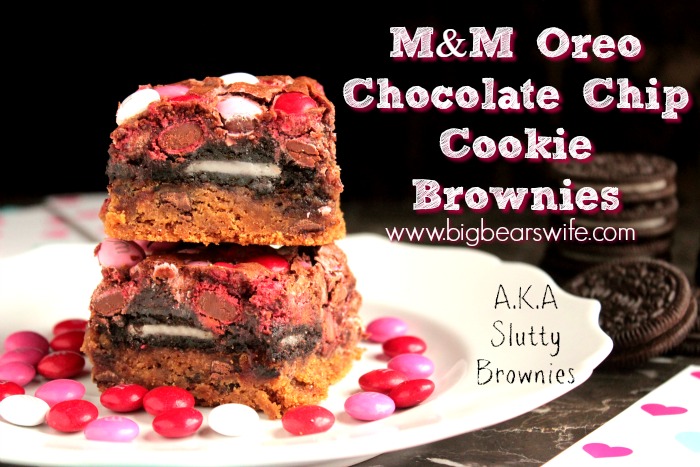 Two little notes for you!

#2. I’ve made these a few times and even though it’s the same recipe and same oven temperature I’ve had to change the cooking time up a little every time I’ve made these.  When I made them down at Toni’s house I had to cook them for just a little over an hour. The first time I cooked them here at the apartment they were done in 45 minutes and the last time I made them it took somewhere between 45 minutes and an hour for them to be done. haha.

So when you make them, bake them at 350F for 45 minutes and then start checking them. You only want a slight jiggly to the brownies.

After baking them, let them cool for about an hour or so before you dig in….IF you can wait that long haha 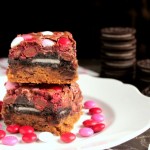