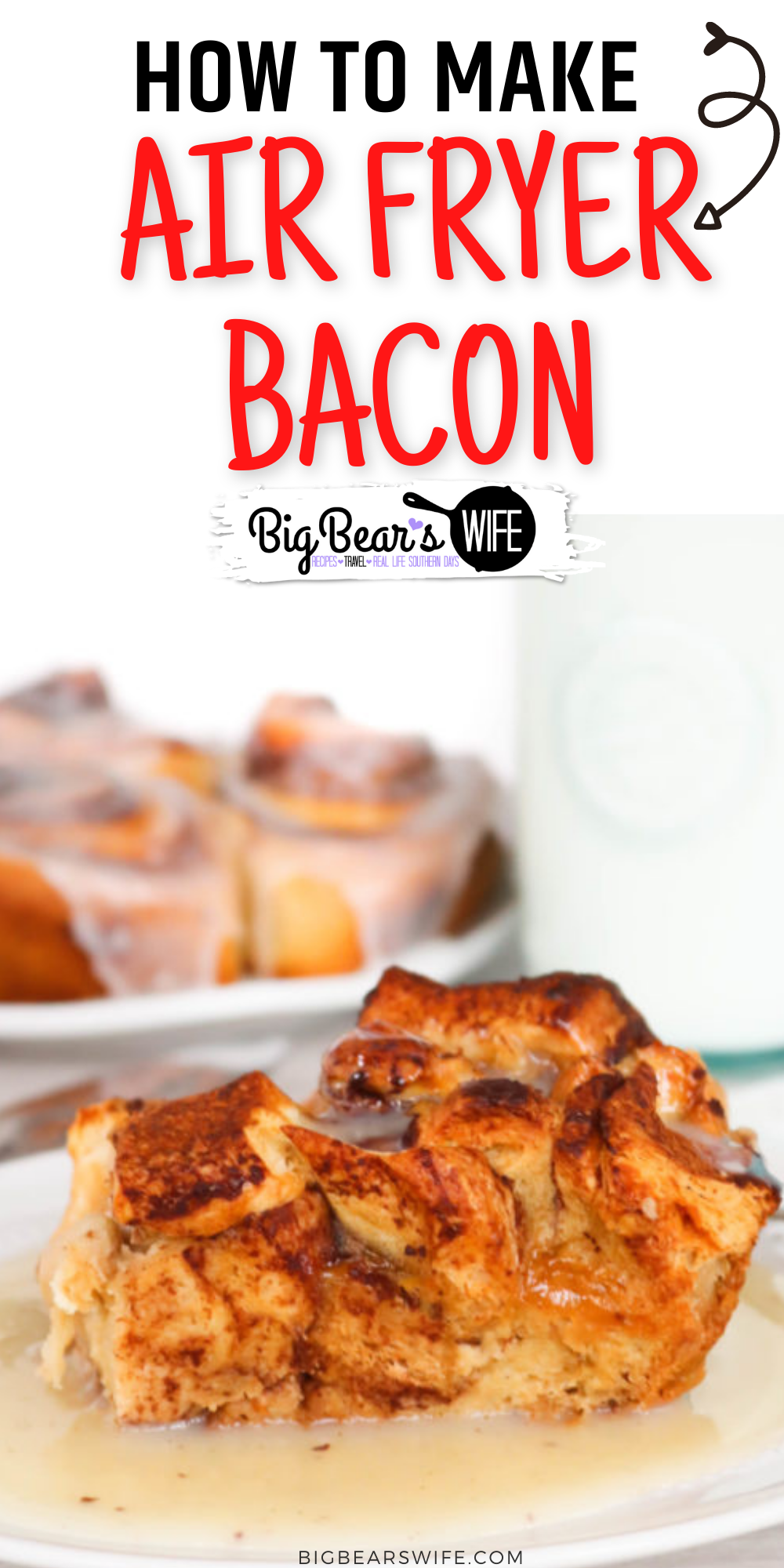 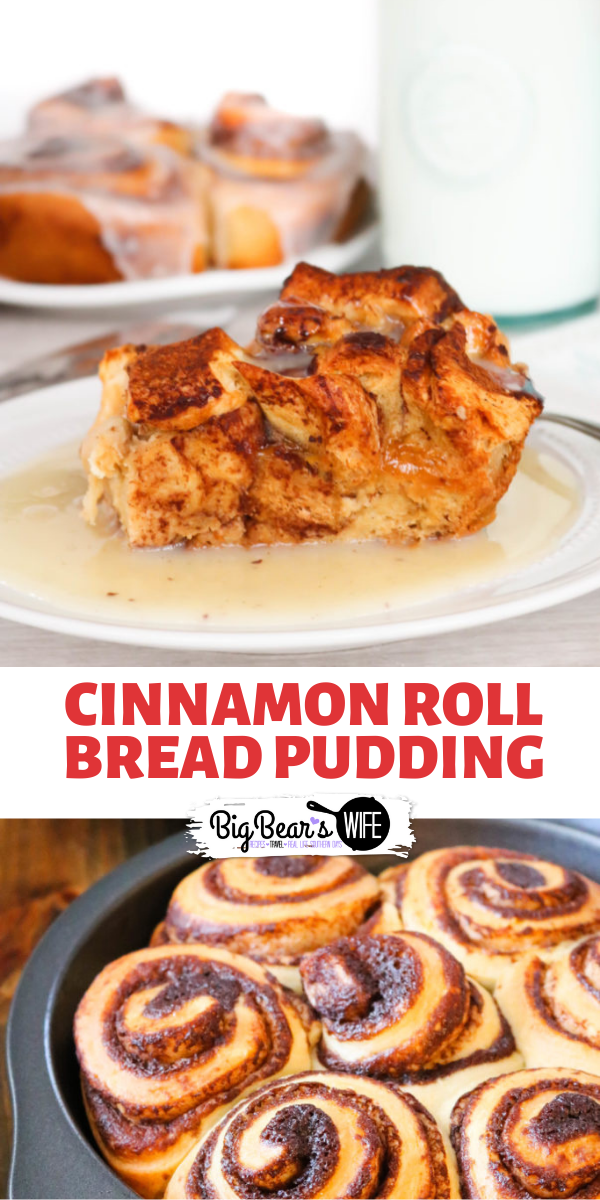 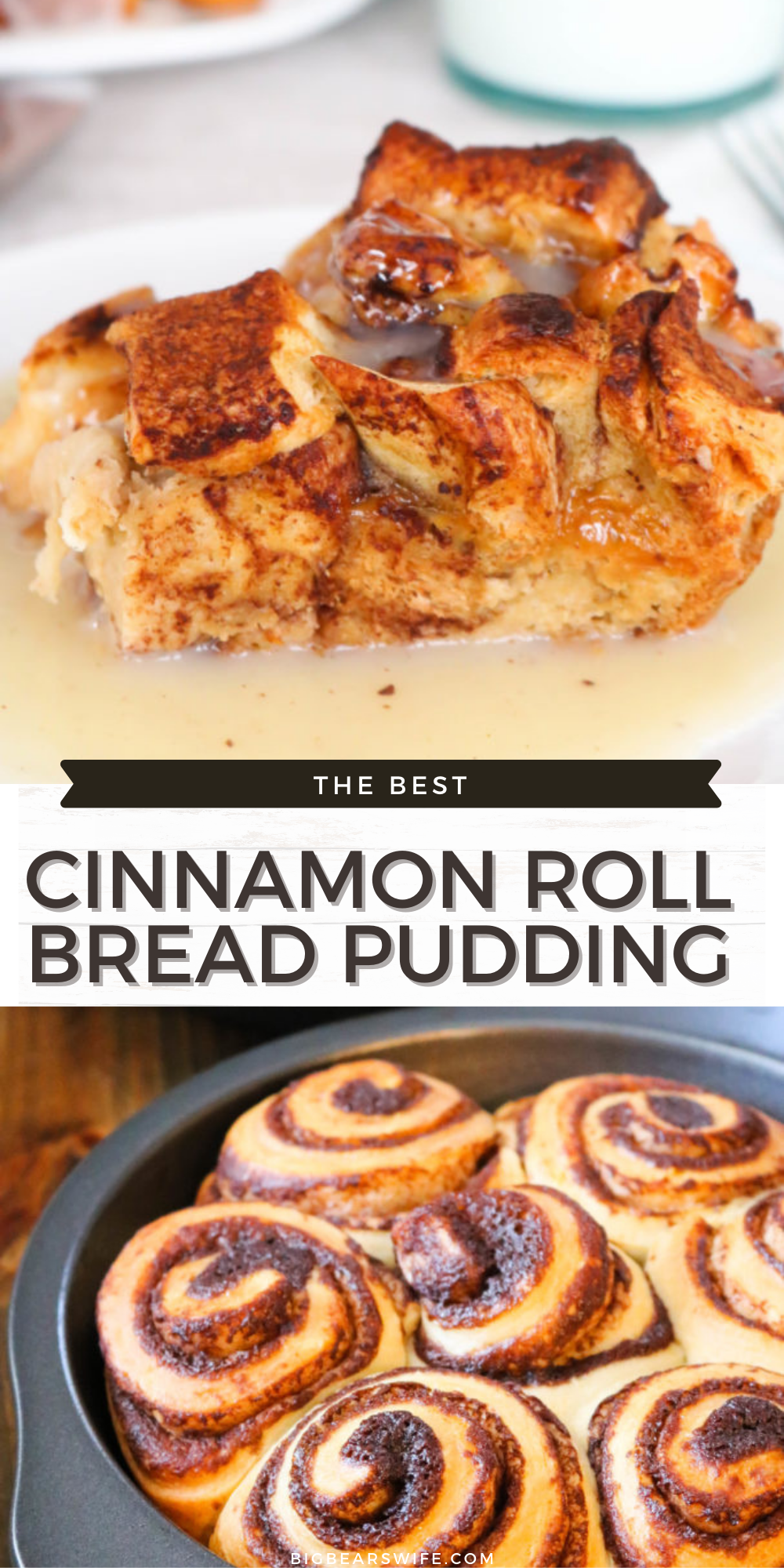 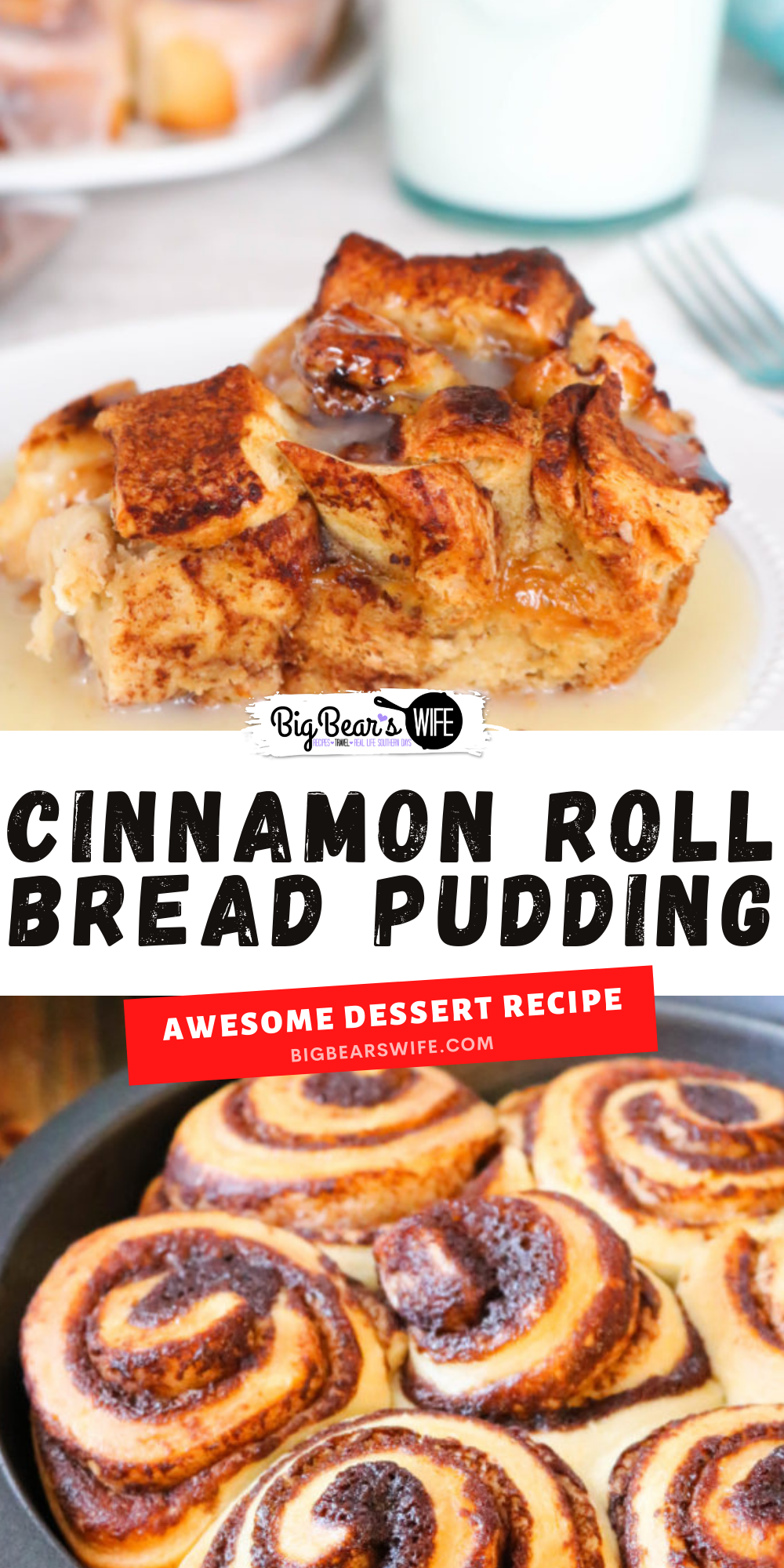 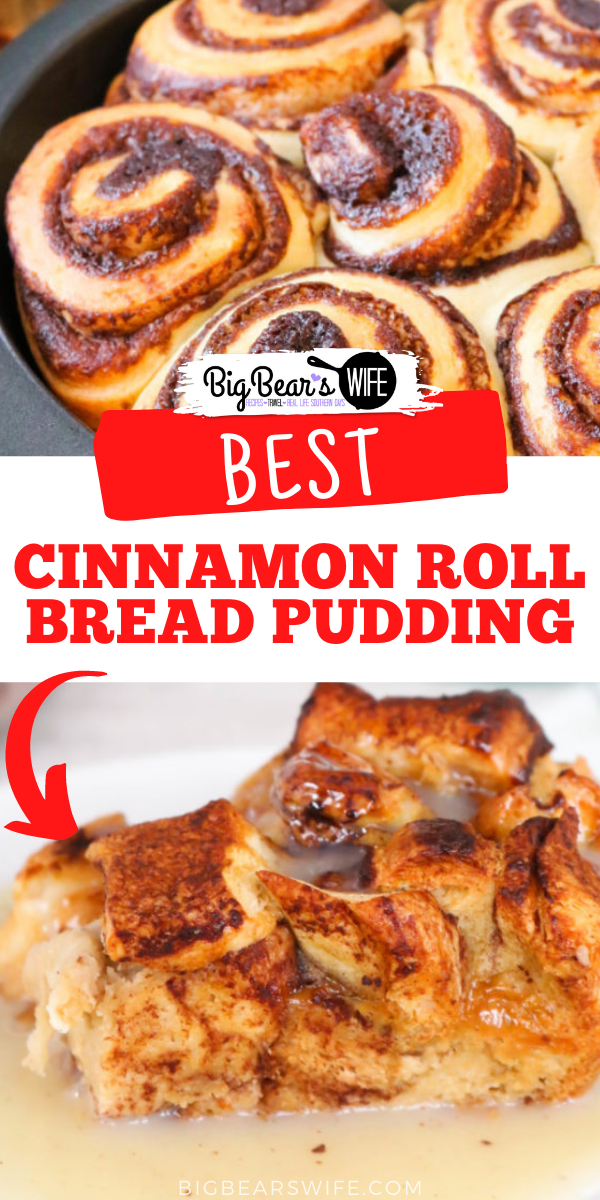 Create an indulgent treat by replacing traditional french bread with cinnamon rolls in this Cinnamon Roll Bread Pudding. Warm, gooey, cinnamon roll goodness is taken over the top with the addition of vanilla custard and a cinnamon infused glaze. 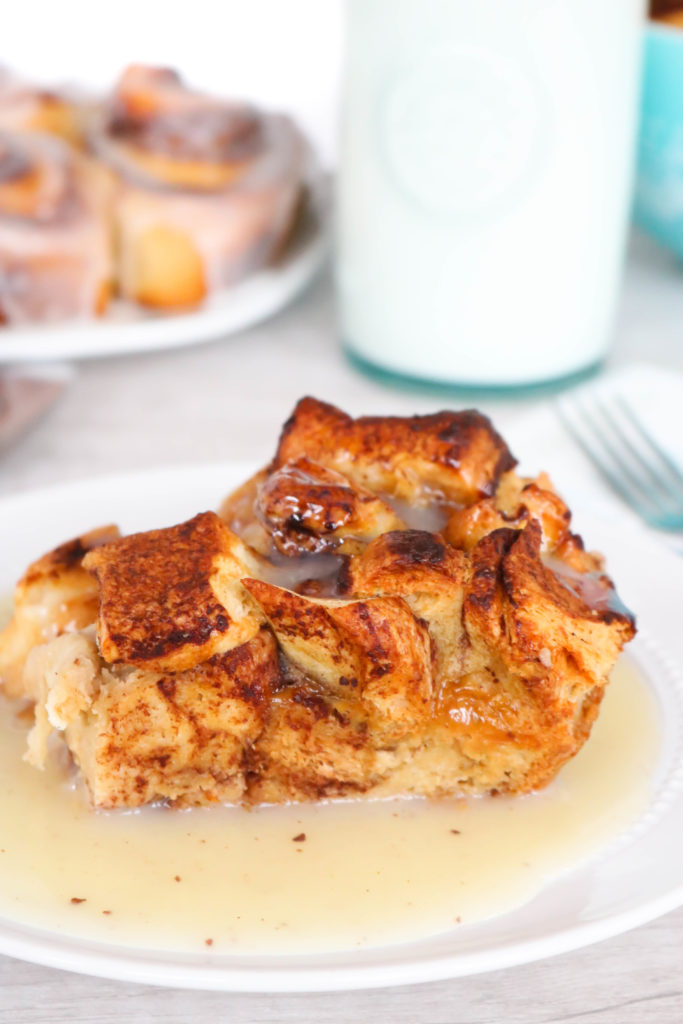 It’s time for another bread pudding recipe to hit the blog and this time I’ve got a Cinnamon Roll Bread Pudding recipe for you that going to become a family favorite!

This bread pudding is perfect for dessert and would be great for a special treat, a Mother’s Day dinner treat, but I think this Cinnamon Roll Bread pudding would also make a fantastic special day breakfast for Christmas, Valentines, Easter, an Anniversary or Birthday. Or you know…. to celebrate a Wednesday.

WHAT IS BREAD PUDDING? 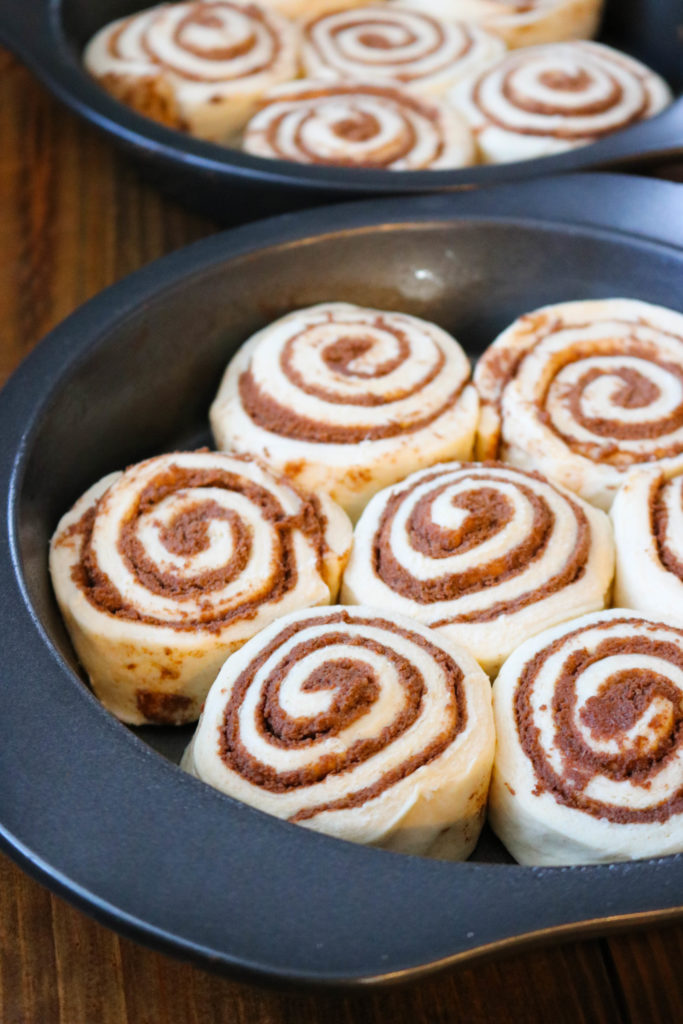 What you’ll need for the bread pudding:

What Cinnamon Rolls To use:

Let’s take a few minutes to talk about cinnamon rolls.

However if you want to make cinnamon rolls from scratch for this bread pudding, here are a few recipes to try: 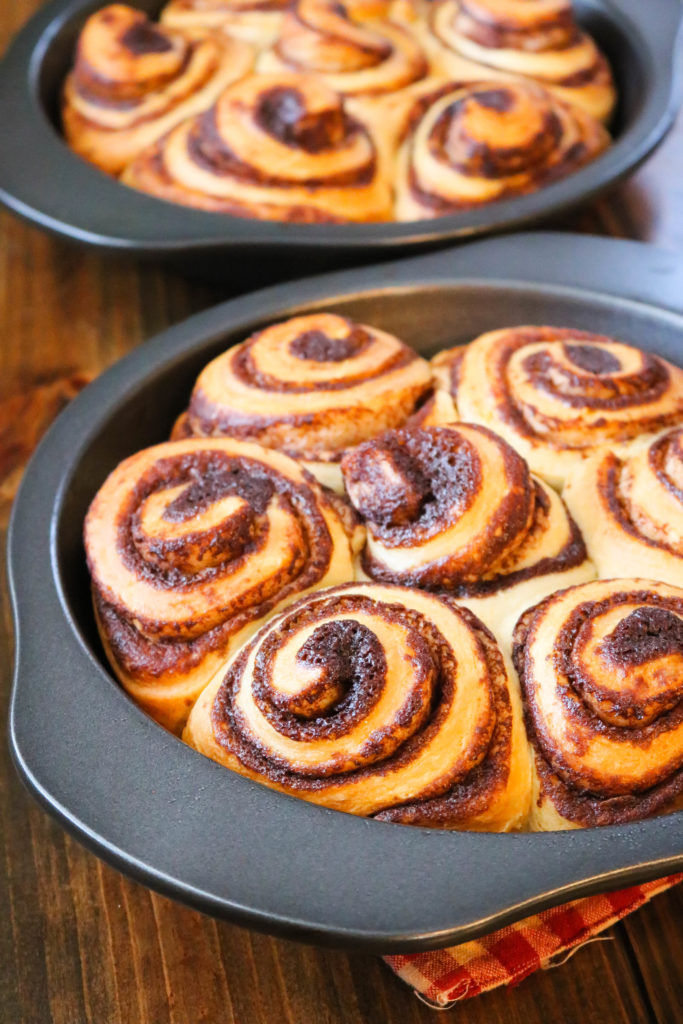 If you want to use store bought cinnamon rolls for this bread pudding, those work perfectly too! Just baked them about 5 minutes longer than the package says. The cinnamon rolls are going to soak in a custard before the bread pudding is baked so they need to be just a tad dry in order to really soak up that custard mixture.

I know you’ll be tempted to glaze those warm cinnamon rolls when they come out of the oven but resist! You’re going to use those packets of cream cheese frosting for the glaze later! 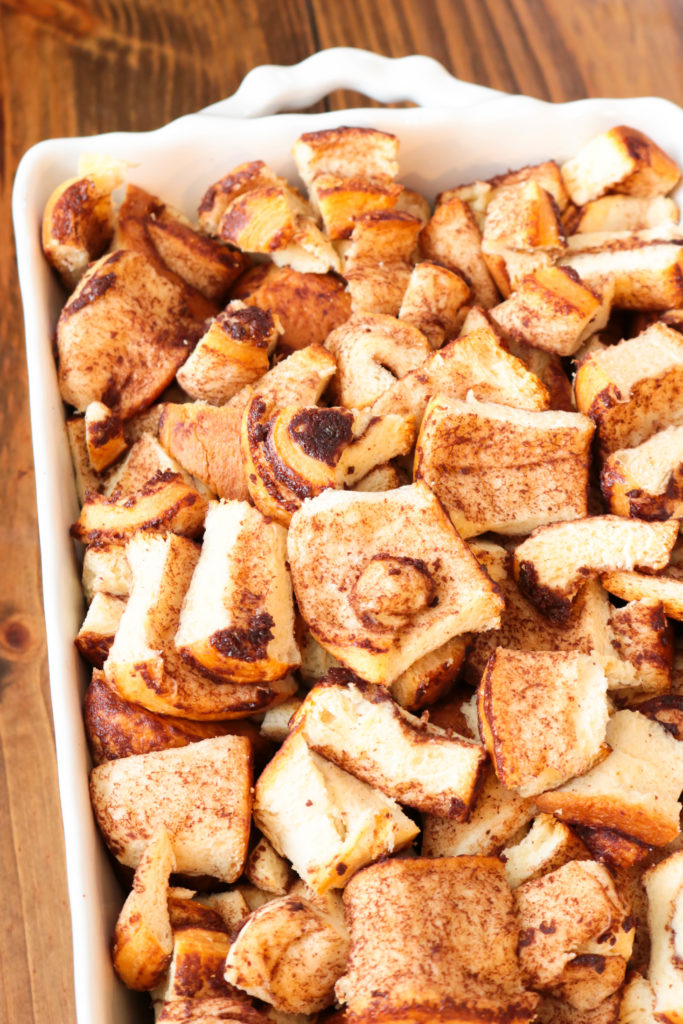 First, cut each cinnamon roll into large to medium pieces and pile them into a 9×9 dish or a 2-quart rectangle baking dish. 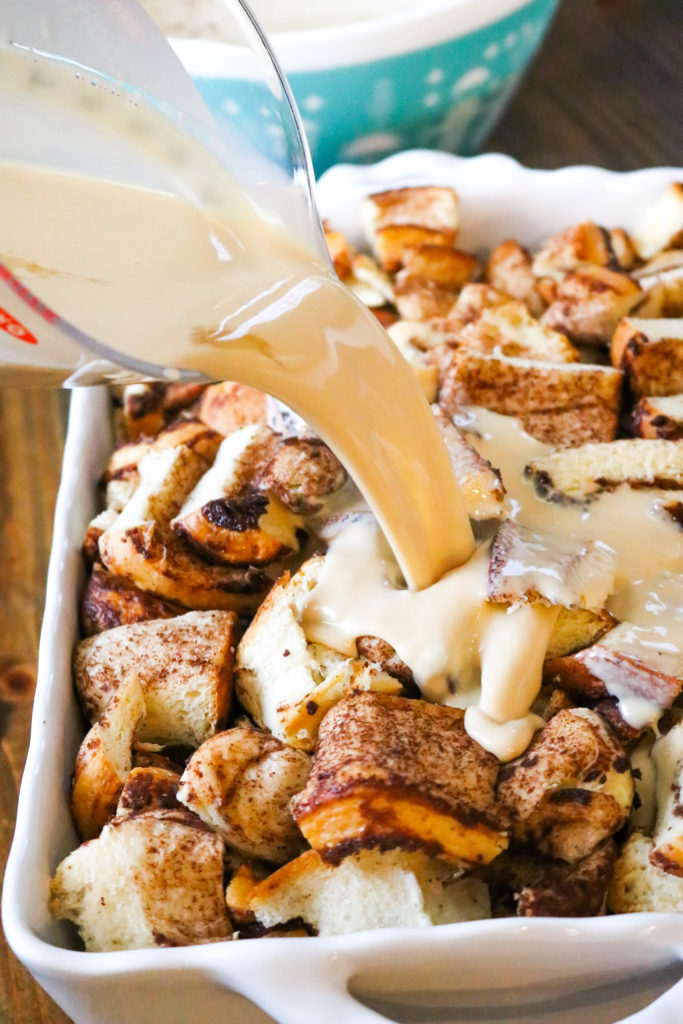 Make the custard according to the recipe and pour that all over the cinnamon roll pieces, making sure to pour it evenly. 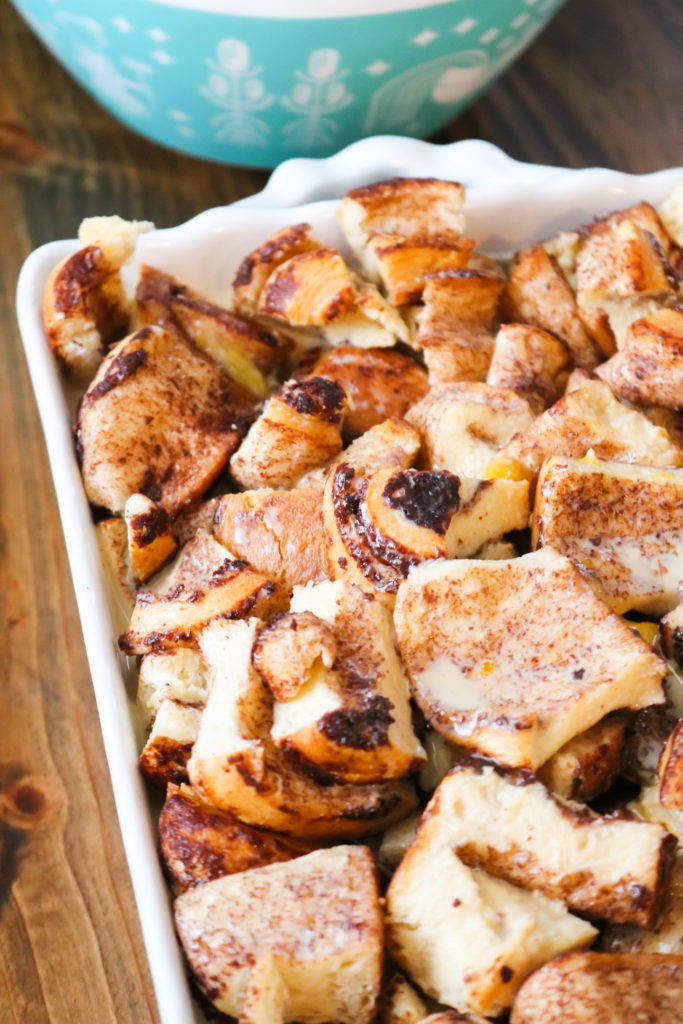 Make sure that every piece is well coated. I like to use a spatula to push the cinnamon rolls down into the custard just a bit so that the custard at least runs over each piece. 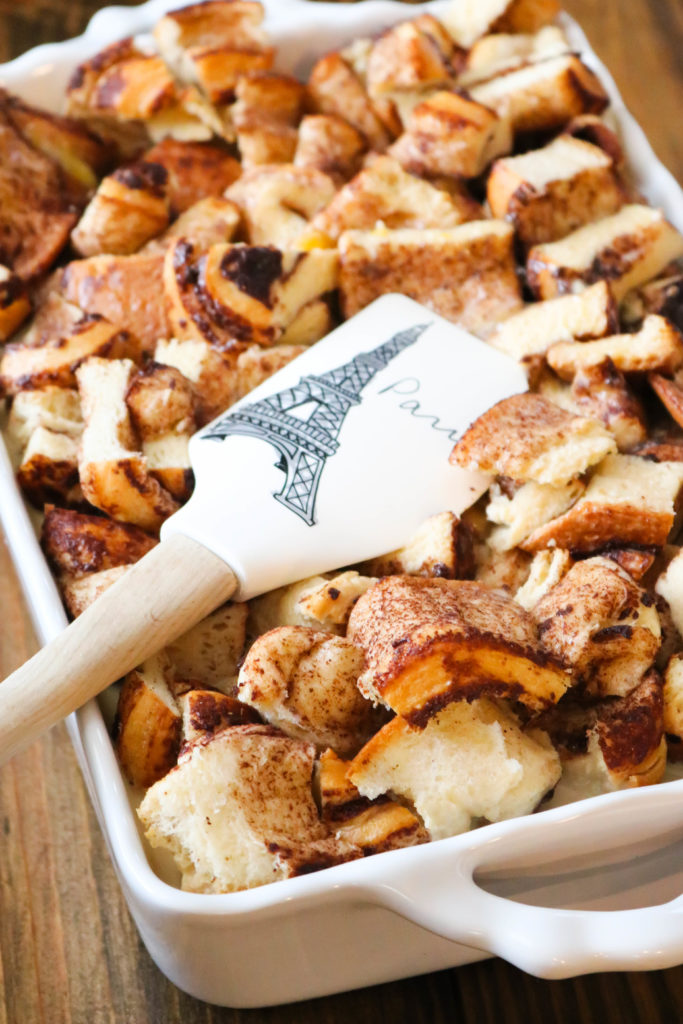 Once you’ve added the custard it’s time to let this bread pudding chill in the fridge.

Just wrap it in foil and pop it into the fridge. 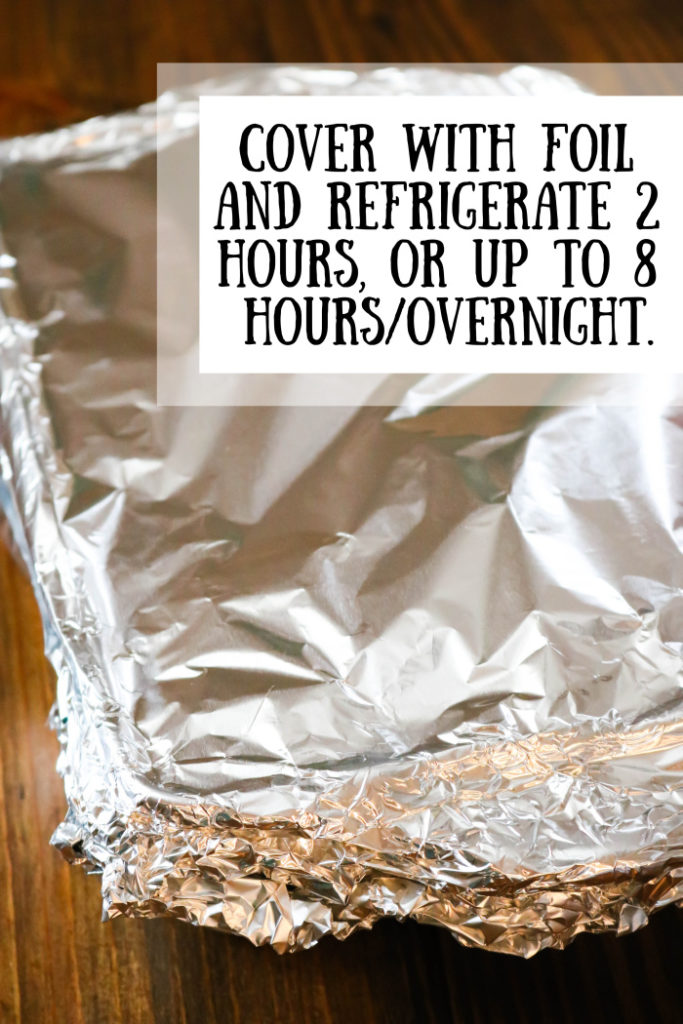 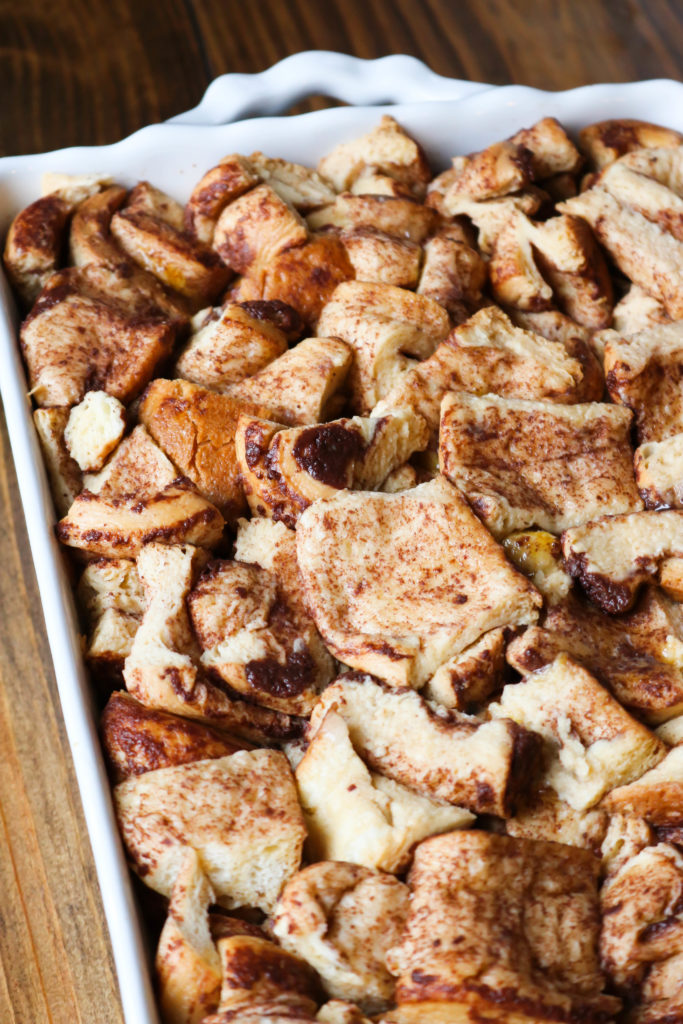 Time for the oven!

After the bread pudding has been sitting in the fridge for as long as you decided to let it chill for, remove the foil and preheat your oven.

Don’t worry it there is still custard in the dish, that’s ok.  This cinnamon roll bread pudding will puff up as it bakes and absorb even more of the custard. 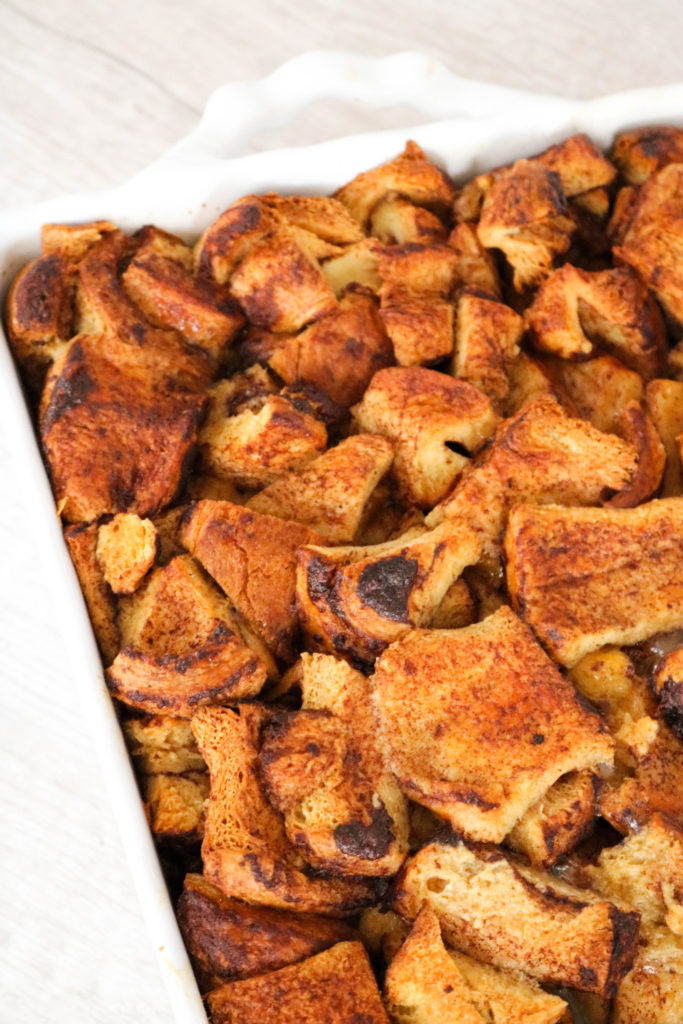 After about an hour the bread pudding should be done.

Remove from it from the oven and let it cool. 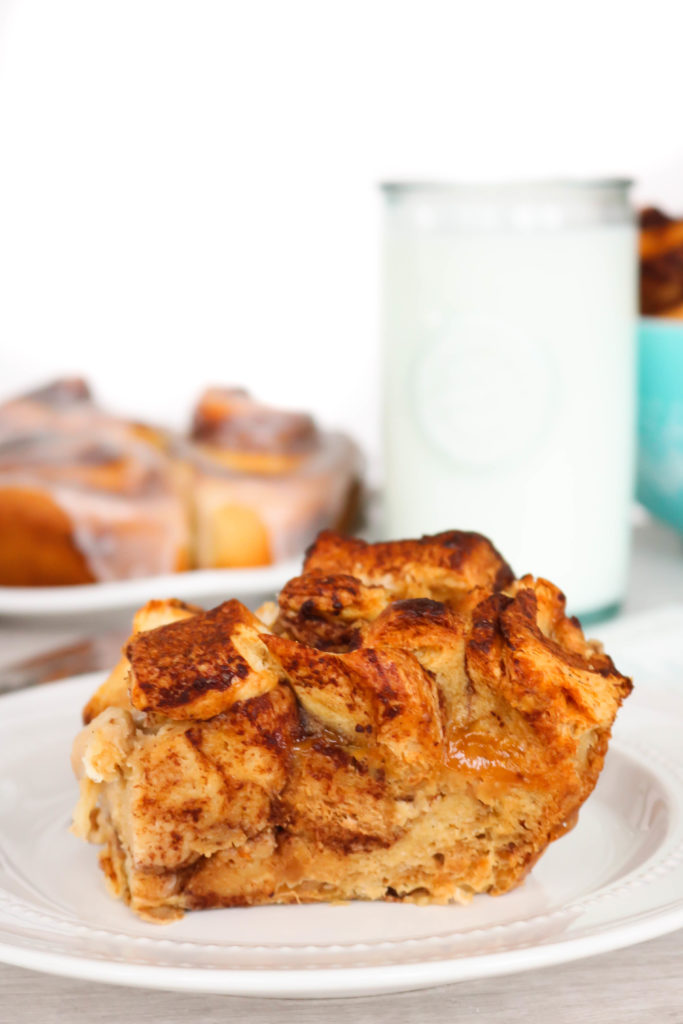 What you’ll need for the sauce: 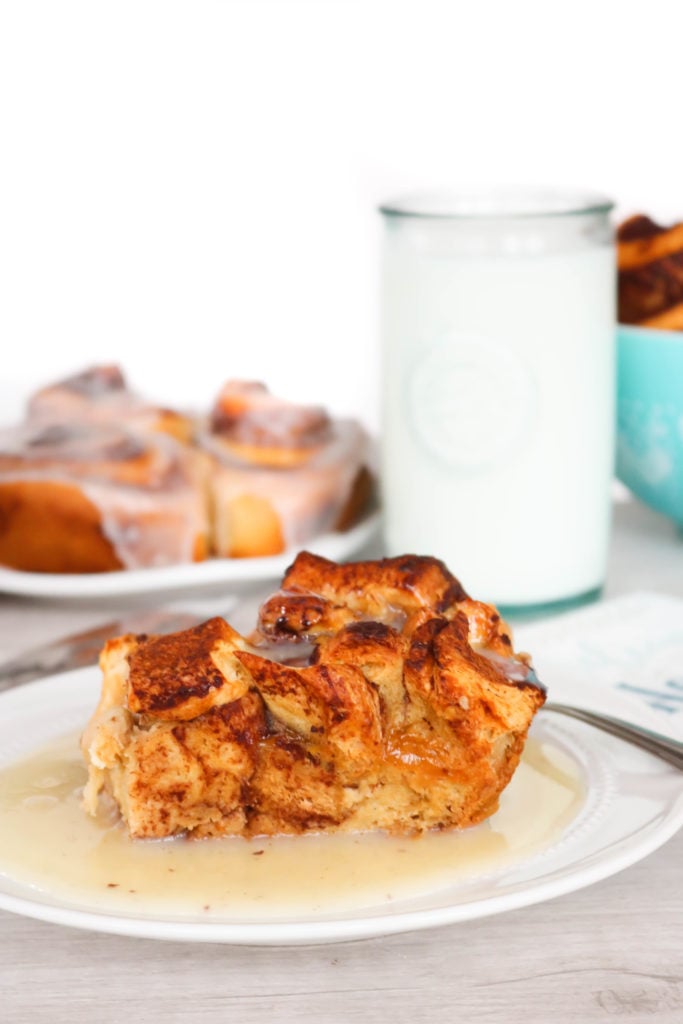 Follow the recipe in the link below to make the glaze and pour it over each piece of cinnamon roll bread pudding as it is served. It can also drizzled over the entire dish before slicing. 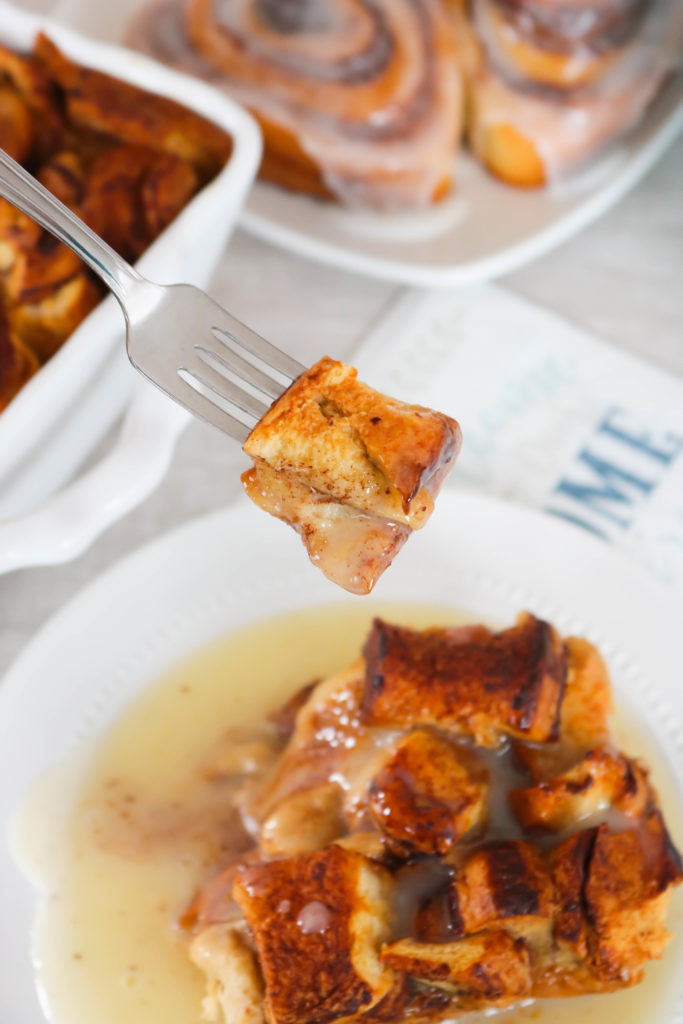 YES you can use homemade cinnamon rolls for this Cinnamon Roll Bread Pudding.

Yes, but you’ll need to use more rolls to fill the pan. 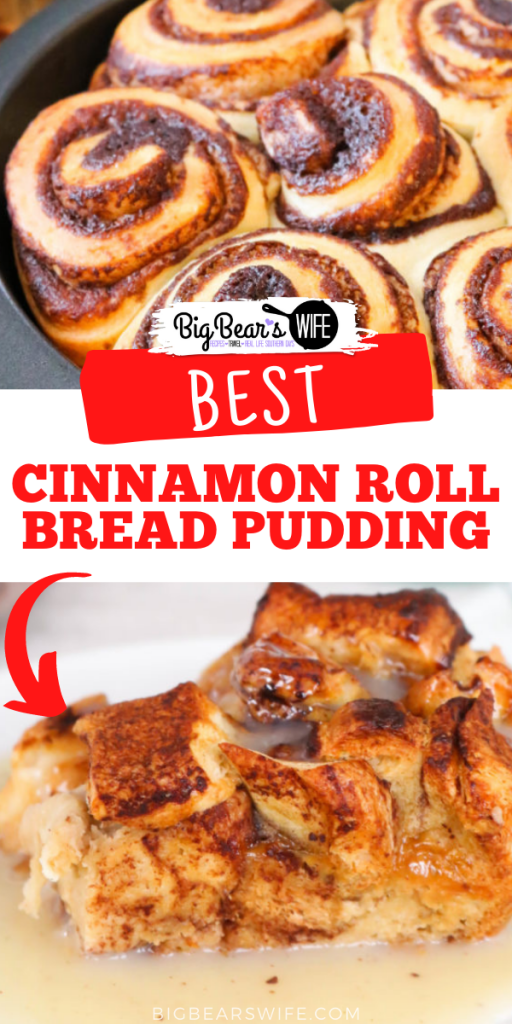